For a brief time, Kerry Finn felt like “The Terminator” or “The Six Million Dollar Man.”

The 60-year-old retired truck driver from Salt Lake County, Utah, lost his left leg to vascular disease from type 2 diabetes. But last year, he was one of 10 human subjects at the University of Utah to test one of the world’s first truly bionic legs, a self-powered prosthetic limb with a computer processor and motorized joints in the ankle and knee that enable an amputee to walk with more power, vigor and better balance.

“If you’ve ever seen ‘The Terminator,’ that’s what it was like,” Finn says about the experience of testing the bionic leg over the standard prosthetic he normally uses. “It made me feel like I could do things I could not do before. Every time I made a step, it was an awesome feeling.”

University of Utah mechanical engineering assistant professor Tommaso Lenzi, who heads the project developing the “Utah Bionic Leg,” has just received two grants to further advance the technology. One is a $2.2 million award from the National Institute of Health and the other a $600,000 grant from the National Science Foundation. 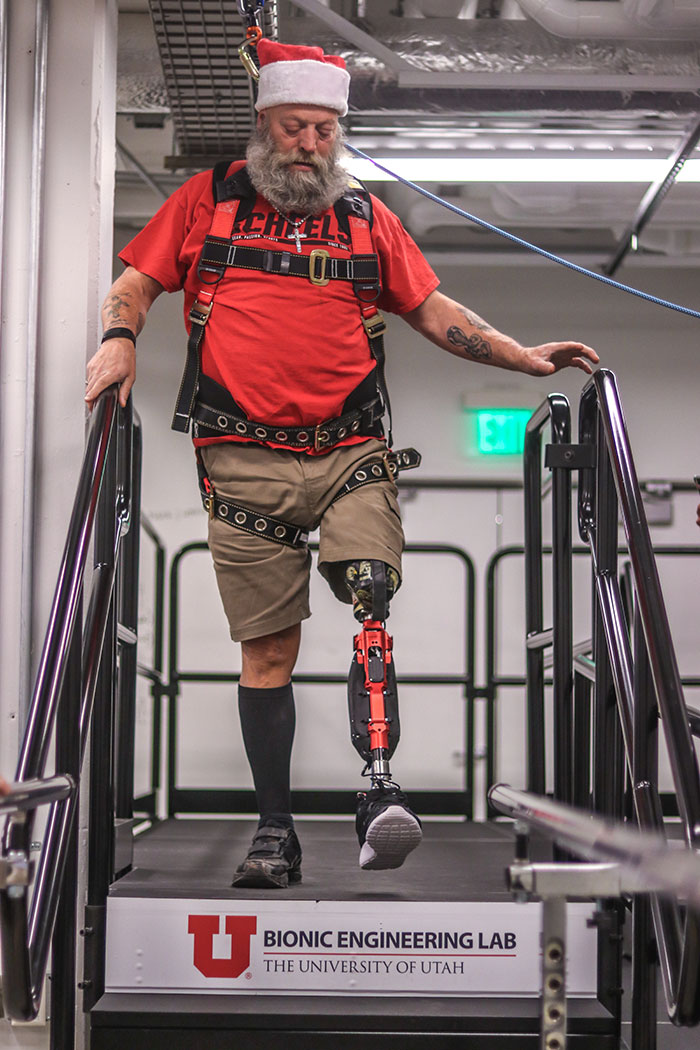 Utah Kerry Finn is one of 10 participants who tested the “Utah Bionic Leg,” a self-powered prosthetic limb with a computer processor and motorized joints in the ankle and knee that enable an amputee to walk with more power, vigor and better balance.

Like the bionic limbs on fictional astronaut, Steve Austin, in the hit TV series, “The Six Million Dollar Man,” Lenzi’s Utah Bionic Leg can make amputees better, stronger and faster, though not necessarily with Austin’s strength to lift cars or run at 60 miles per hour.

Instead, Lenzi’s real bionic leg has sensors, motors, a computer processor and artificial intelligence that all work in conjunction to give the user more power to walk with less stress on the body than with a standard prosthesis. That means people with amputations, particularly elderly individuals, can walk much longer with the new leg.

“If you walk faster, it will walk faster for you and give you more energy. Or it adapts automatically to the height of the step. Or it can help you cross over obstacles,” Lenzi says.

The leg uses custom-designed force and torque sensors as well as accelerometers and gyroscopes to help determine the leg’s position in space. Those sensors are connected to a computer processor that perceives the environment and determines the user’s rhythmic motions, step length and walking speed. Based on that real-time data, it then provides power to the motors in the joints to assist in walking, standing up, walking up stairs, or maneuvering around obstacles.

“Every time you take a step, it’s powered, and it gives a certain kick. It also gives me the ability to take two steps at a time going up stairs,” Finn says. “With this leg, it’s less strain on my stump. You don’t have to work as hard. And it takes a lot of the stress off the body.”

Just as important, the leg is designed to be about six pounds, half the weight of other bionic legs under development, a huge benefit for a large demographic of amputees — elderly people or those who, like Finn, lost a lower limb to vascular disease.

Utahn Kerry Finn, left, confers with University of Utah mechanical engineering assistant professor Tommaso Lenzi. Lenzi and his team are developing one of the world’s first truly bionic legs, a self-powered prosthetic limb with a computer processor and motorized joints in the ankle and knee that enable an amputee to walk with more power, vigor and better balance.

“The people who need these bionic legs are the ones who are normally the most limited — the elderly,” Lenzi says.

While the prosthetic is made of mostly aluminum and titanium, the lightweight construction is more due to the leg’s design in which “all of the elements play together,” Lenzi says. “We have a unique way of designing the systems.”

For example, the leg uses a smart transmission system connecting the electrical motors to the joints. This optimized system intuitively knows what kind of activity the user wants to do and automatically adapts to it, like shifting gears on a bike. The leg also uses smaller batteries to power the motor that are built into the leg.

Lenzi and his team just received the government grants to research how the leg enables a user to move better and do more. The team will also be researching how the prosthetic could be designed to better anticipate a user’s movements by tracking muscle activity in the person’s residual limb.

“The ability to walk is essential to your life and being able to pursue whatever you want to do. When just standing up is a pain and when walking means being afraid of falling, you just don’t go on with your life and you are stuck at home,” Lenzi says. “This is about making bionics accessible for all people and not just those who are young and high performing.” 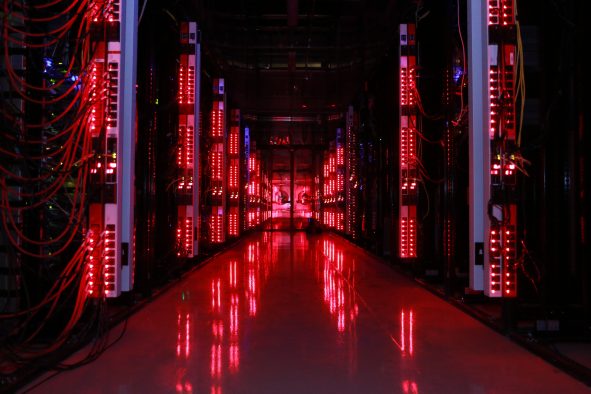