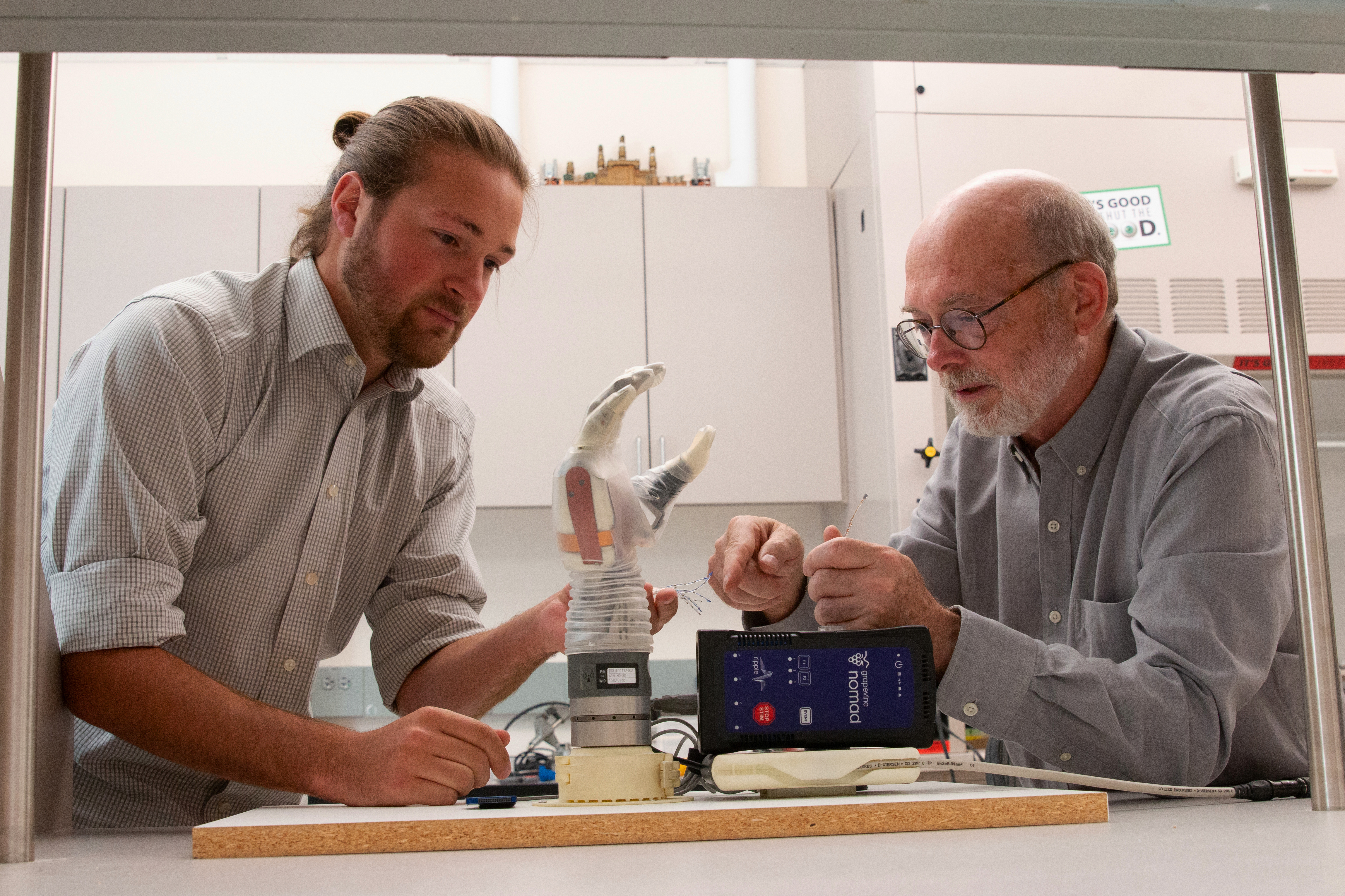 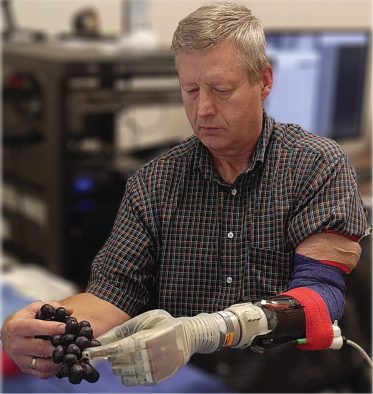 Keven Walgamott had a good “feeling” about picking up the egg without crushing it.

What seems simple for nearly everyone else can be more of a Herculean task for Walgamott, who lost his left hand and part of his arm in an electrical accident 17 years ago. But he was testing out the prototype of a high-tech prosthetic arm with fingers that not only can move, they can move with his thoughts. And thanks to a biomedical engineering team at the University of Utah, he “felt” the egg well enough so his brain could tell the prosthetic hand not to squeeze too hard.

That’s because the team, led by U biomedical engineering associate professor Gregory Clark, has developed a way for the “LUKE Arm” (so named after the robotic hand that Luke Skywalker got in “The Empire Strikes Back”) to mimic the way a human hand feels objects by sending the appropriate signals to the brain. Their findings were published in a new paper co-authored by U biomedical engineering doctoral student Jacob George, former doctoral student David Kluger, Clark and other colleagues in the latest edition of the journal Science Robotics. A copy of the paper may be obtained by emailing robopak@aaas.org.

“We changed the way we are sending that information to the brain so that it matches the human body. And by matching the human body, we were able to see improved benefits,” George says. “We’re making more biologically realistic signals.”

That means an amputee wearing the prosthetic arm can sense the touch of something soft or hard, understand better how to pick it up and perform delicate tasks that would otherwise be impossible with a standard prosthetic with metal hooks or claws for hands.

“It almost put me to tears,” Walgamott says about using the LUKE Arm for the first time during clinical tests in 2017. “It was really amazing. I never thought I would be able to feel in that hand again.”

Walgamott, a real estate agent from West Valley City, Utah, and one of seven test subjects at the U, was able to pluck grapes without crushing them, pick up an egg without cracking it and hold his wife’s hand with a sensation in the fingers similar to that of an able-bodied person.

“One of the first things he wanted to do was put on his wedding ring. That’s hard to do with one hand,” says Clark. “It was very moving.”

Those things are accomplished through a complex series of mathematical calculations and modeling. 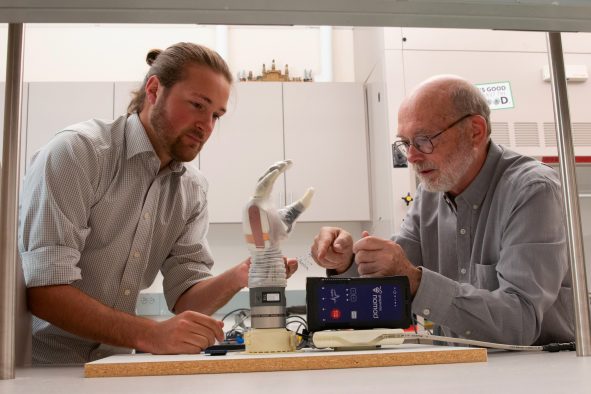 The LUKE Arm has been in development for some 15 years. The arm itself is made of mostly metal motors and parts with a clear silicon “skin” over the hand. It is powered by an external battery and wired to a computer. It was developed by DEKA Research & Development Corp., a New Hampshire-based company founded by Segway inventor Dean Kamen.

Meanwhile, the U’s team has been developing a system that allows the prosthetic arm to tap into the wearer’s nerves, which are like biological wires that send signals to the arm to move. It does that thanks to an invention by U biomedical engineering Emeritus Distinguished Professor Richard A. Normann called the Utah Slanted Electrode Array. The array is a bundle of 100 microelectrodes and wires that are implanted into the amputee’s nerves in the forearm and connected to a computer outside the body. The array interprets the signals from the still-remaining arm nerves, and the computer translates them to digital signals that tell the arm to move.

But it also works the other way. To perform tasks such as picking up objects requires more than just the brain telling the hand to move. The prosthetic hand must also learn how to “feel” the object in order to know how much pressure to exert because you can’t figure that out just by looking at it.

First, the prosthetic arm has sensors in its hand that send signals to the nerves via the array to mimic the feeling the hand gets upon grabbing something. But equally important is how those signals are sent. It involves understanding how your brain deals with transitions in information when it first touches something. Upon first contact of an object, a burst of impulses runs up the nerves to the brain and then tapers off. Recreating this was a big step.

“Just providing sensation is a big deal, but the way you send that information is also critically important, and if you make it more biologically realistic, the brain will understand it better and the performance of this sensation will also be better,” says Clark.

To achieve that, Clark’s team used mathematical calculations along with recorded impulses from a primate’s arm to create an approximate model of how humans receive these different signal patterns. That model was then implemented into the LUKE Arm system.

In addition to creating a prototype of the LUKE Arm with a sense of touch, the overall team is already developing a version that is completely portable and does not need to be wired to a computer outside the body. Instead, everything would be connected wirelessly, giving the wearer complete freedom.

Clark says the Utah Slanted Electrode Array is also capable of sending signals to the brain for more than just the sense of touch, such as pain and temperature, though the paper primarily addresses touch. And while their work currently has only involved amputees who lost their extremities below the elbow, where the muscles to move the hand are located, Clark says their research could also be applied to those who lost their arms above the elbow.

Clark hopes that in 2020 or 2021, three test subjects will be able to take the arm home to use, pending federal regulatory approval.

The research involves a number of institutions including the U’s Department of Neurosurgery, Department of Physical Medicine and Rehabilitation and Department of Orthopedics, the University of Chicago’s Department of Organismal Biology and Anatomy, the Cleveland Clinic’s Department of Biomedical Engineering and Utah neurotechnology companies Ripple Neuro LLC and Blackrock Microsystems. The project is funded by the Defense Advanced Research Projects Agency and the National Science Foundation.

“This is an incredible interdisciplinary effort,” says Clark. “We could not have done this without the substantial efforts of everybody on that team.”