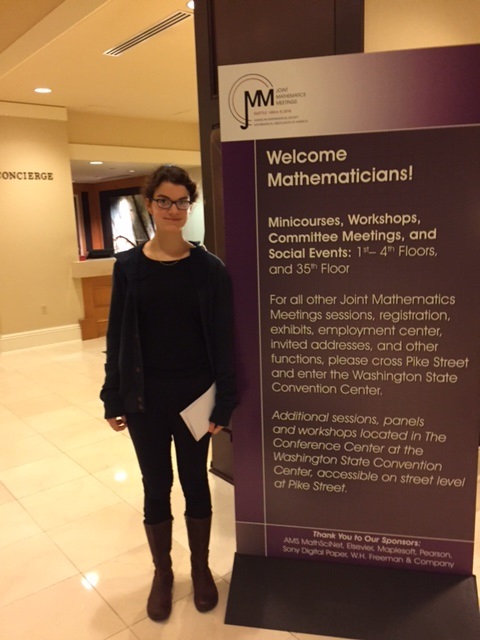 Math senior Mackenzie Simper is the first U student to receive the Churchill Scholarship.

“Mackenzie’s receipt of the Churchill Scholarship marks a tremendous milestone for the university. As our first Churchill Scholar, we have no doubt that she will be an excellent representative of our university and state. Mackenzie has forged the path for other U Churchill Scholars to follow,” said the U’s Senior Vice President for Academic Affairs Ruth Watkins.

The Churchill Scholarship, established in 1963 at the request of Sir Winston Churchill, provides undergraduates with outstanding academic achievement in the science, technology, engineering and math fields the opportunity to complete a one-year master’s program at the University of Cambridge. Students go through a rigorous endorsement process in order to apply, but only after their home institution has been vetted with the Churchill Foundation. The University of Utah was recently added to the foundation in spring 2014. The scholarship has been called “the most academically challenging of the U.K. scholarships.”

“The process of applying was intense, but it was very beneficial for me to think about what I want to do in the future. I am also grateful to the people who I met throughout the process and the many opportunities the math department has provided.  I am excited to go to Cambridge and be the U’s first Churchill scholar,” said Simper

Simper initially planned to attend medical school, which prompted her decision to double major in math and biology at Salt Lake Community College. She soon realized, though, that math was a spectacular field with many applications and areas to explore. When she transferred to the University of Utah in fall 2014, she knew that math was the subject she wanted to pursue.

“Math is so much fun. My research has allowed me to work on problems that truly interest me, and has shown me the connections between different areas of math.  Any student who is excited by math should try doing research, because it is a chance to experience math in a completely different way than in the classroom,” said Simper.

Under the direction of Tom Alberts, assistant professor in mathematics at the University of Utah, Simper has worked on two research projects over the past year and half. One focused on the stochastic heat equation on Markov Chains. The second studied the Bak-Sneppen model, a simplified model of evolution that incorporates natural selection and spatial interaction between species. She is currently writing up the results of this second project for publication.

“I’m proud to have called her my student and research collaborator, just as the mathematics department as a whole is proud of her as one of our best students ever,” said Alberts.

Simper continued her research experience this past summer on a National Science Foundation Research Experiences for Undergraduates fellowship, where she did research with Bjorn Sandstede, a professor in applied mathematics at Brown University. Her project focused on dynamical systems with noise, studying them both analytically and numerically. This research was the basis for another publication in progress and was the focus of a presentation she gave to the University of Utah Department of Mathematics.

Sandstede said that Simper’s “intellectual achievements are outstanding; she is passionate about mathematics and is one of the most creative and advanced undergraduate students I have known and worked with during my career.”

Recently, Simper was awarded the Alice T. Schafer Prize for Undergraduate Women in Mathematics, which highlights one outstanding undergraduate woman nationally who demonstrates high quality of performance in advanced mathematics course, a real interest in mathematics and an ability for independent work.

Simper will use the Churchill Scholarship to pursue a Master of Advanced Study in Pure Mathematics at Cambridge starting in the fall.  Don Tucker, professor in math at the University of Utah and mentor to Simper, said, “She will be a credit to our nation both as a scholar and as a person.” Upon completion, Simper plans to come back to the U.S. to complete her doctorate in mathematics.

Simper aspires to become a professor, and hopes through research and teaching to inspire students to realize math is more than just solving equations, it is all around them. Alberts, described Simper as such: “Mackenzie has tremendous faith in the ability of mathematics research to make important contributions to humanity and to improve the lives of others.”