Each year, nearly 20 billion sanitary pads, tampons and applicators are dumped into North American landfills every year, and it takes centuries for them to biodegrade inside plastic bags, according to a 2016 Harvard Business School report. Additionally, it requires high amounts of fossil fuel energy to produce the plastic for these products, resulting in a large carbon footprint. 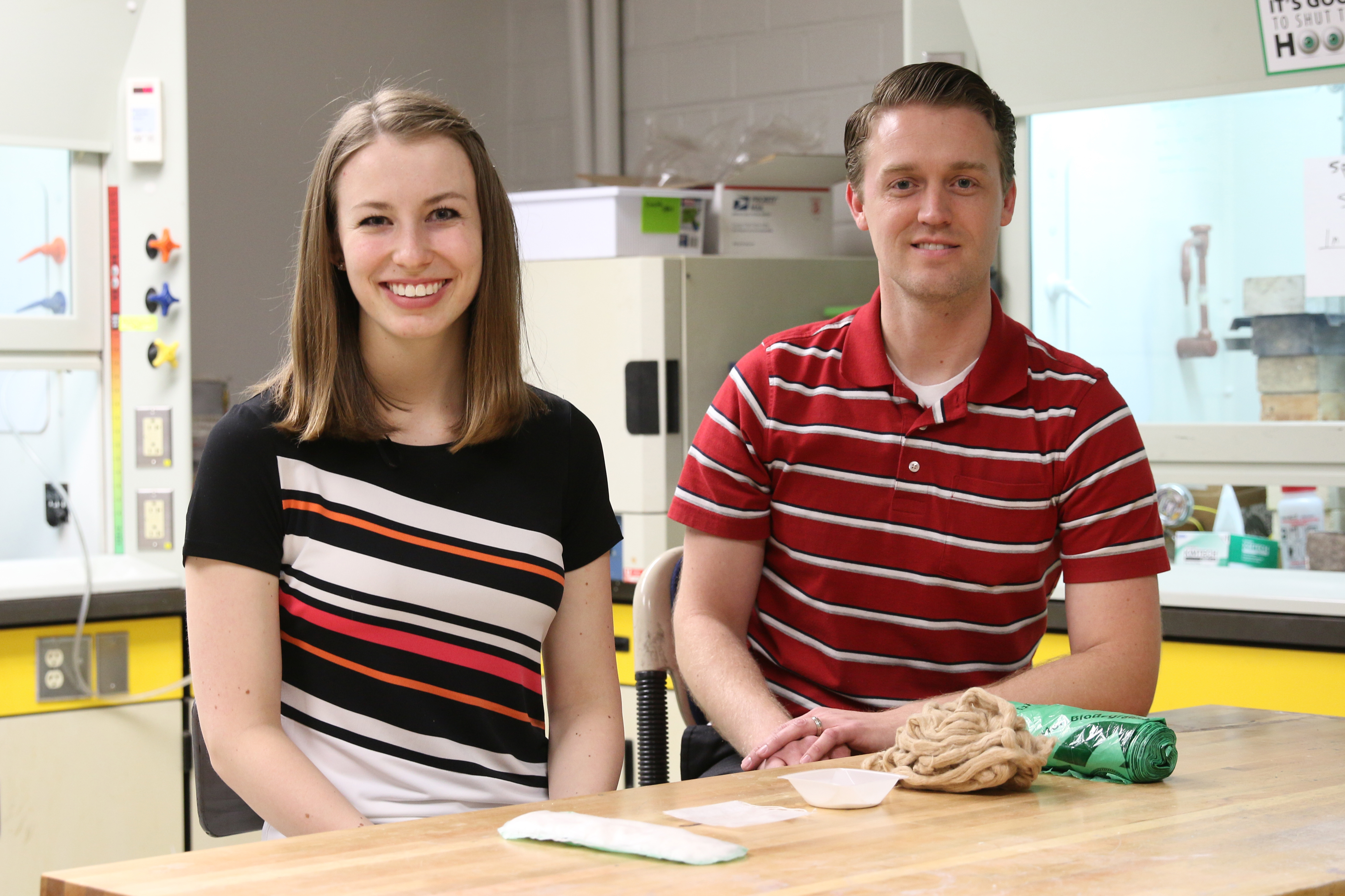 University of Utah materials science and engineering student Amber Barron (left) and materials science and engineering assistant professor (lecturer) Jeff Bates are part of a team that has developed a new, 100-percent biodegradable feminine maxi pad that is made of all natural materials and is much thinner and more comfortable than other similar products. In front of them is a series of materials they have experimented with, including cotton, to make the finished maxi pad (far left on the table).

But a team of students led by University of Utah materials science and engineering assistant professor (lecturer) Jeff Bates has developed a new, 100-percent biodegradable feminine maxi pad that is made of all natural materials and is much thinner and more comfortable than other similar products.

The SHERO Pad uses a processed form of algae as its super-absorbent ingredient, which is then covered with cotton and the same material that makes up tea bags. The result is a maxi pad that is effective, comfortable to wear and can break down anywhere from 45 days to six months.

“This is novel in comparison to other biodegradable options out there for pads,” said Amber Barron, a University of Utah junior in materials science and engineering who is on the team of four students. “Most are really bulky because they don’t have a superabsorbent layer.”

The need for something like the SHERO Pad originally came from SHEVA, a nonprofit advocacy group for women and girls in Guatemala, which turned to Bates because it was looking for a sustainable solution for feminine hygiene waste. One of Bates’ area of research is in hydrogels, which are water-absorbing polymers.

“In Guatemala, there’s no public sanitation system. All the rivers are black because they are so polluted,” Bates says. “So there really is a genuine need for people in Guatemala to have biodegradable options.”

Part of Bates’ solution came one night while feeding his 5-year-old daughter.

“One day we were eating dinner with white rice, and my daughter spilled it all over the floor,” he says about that night two years ago. “The next morning, when I was cleaning it up, it was all dry and crusted. I drove to work and thought, ‘What was it about rice that does that?’”

That question of how rice hydrates and dehydrates began a two-year process of searching for the right natural materials for the feminine pad, which included testing with different leaves, such as banana leaves, and forms of cotton.

Bates, Barron and the rest of the team — which includes sophomore students, Sarai Patterson, Ashlea Patterson and Ali Dibble — ultimately developed the SHERO Pad, which is made up of four layers: An outer layer of raw cotton similar to a tea bag to repel liquid, a transfer layer of organic cotton to absorb the liquid and pull it from the outer layer, the super-absorbent layer made of agarose gel (a polymer from brown algae), and a final layer made of a corn-based material that keeps the moisture inside and prevents leakage.

While there are other similar sustainable feminine pads on the market today, they either use a hydrogel that is not 100 percent biodegradable or they use thicker layers of natural cotton that are uncomfortable to wear, Barron says. Another advantage to the SHERO Pad is that it can easily be manufactured in smaller villages using locally sourced materials and without sophisticated tools, just common presses and grinding stones, Bates says.

While the team originally developed the SHERO Pad for users in developing countries such as Guatemala, Bates and the students also will start selling the product in the U.S. for environmentally conscious women. A working prototype has been produced, and they have launched a startup company based in Bountiful, Utah. They hope to have products in Guatemala and on U.S. store shelves within a year. 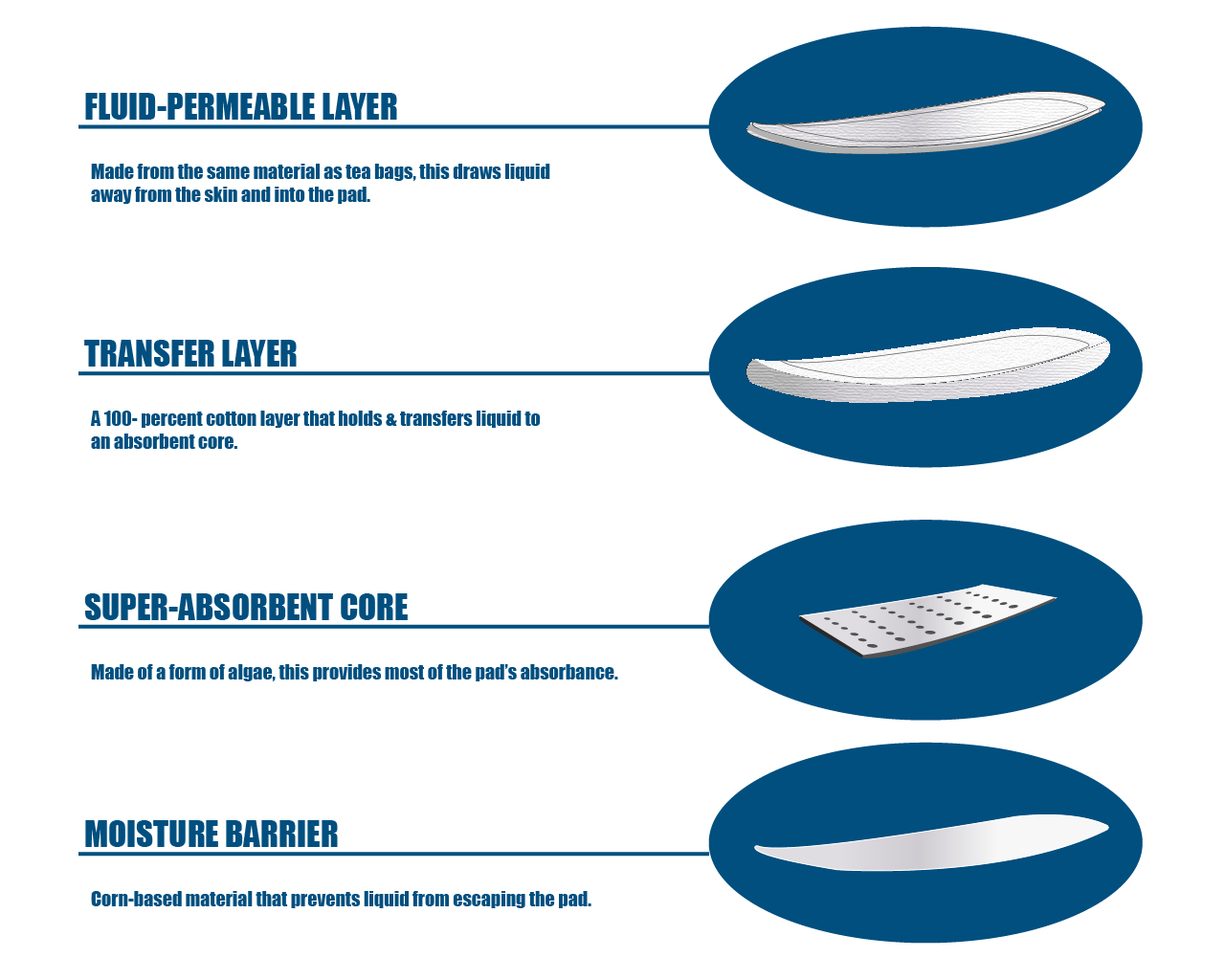 The SHERO Pad, developed by a team of University of Utah materials science and engineering students, is a new feminine hygiene pad that is 100 percent biodegradable and made from all natural materials. It consists of four layers and can break down in as little as 45 days.