Nearly a century ago, German chemist Fritz Haber won the Nobel Prize in Chemistry for a process to generate ammonia from hydrogen and nitrogen gases. The process, still in use today, ushered in a revolution in agriculture, but now consumes around one percent of the world’s energy to achieve the high pressures and temperatures that drive the chemical reactions to produce ammonia.

Today, University of Utah chemists publish a different method, using enzymes derived from nature, that generates ammonia at room temperature. As a bonus, the reaction generates a small electrical current. The method is published in Angewandte Chemie International Edition. 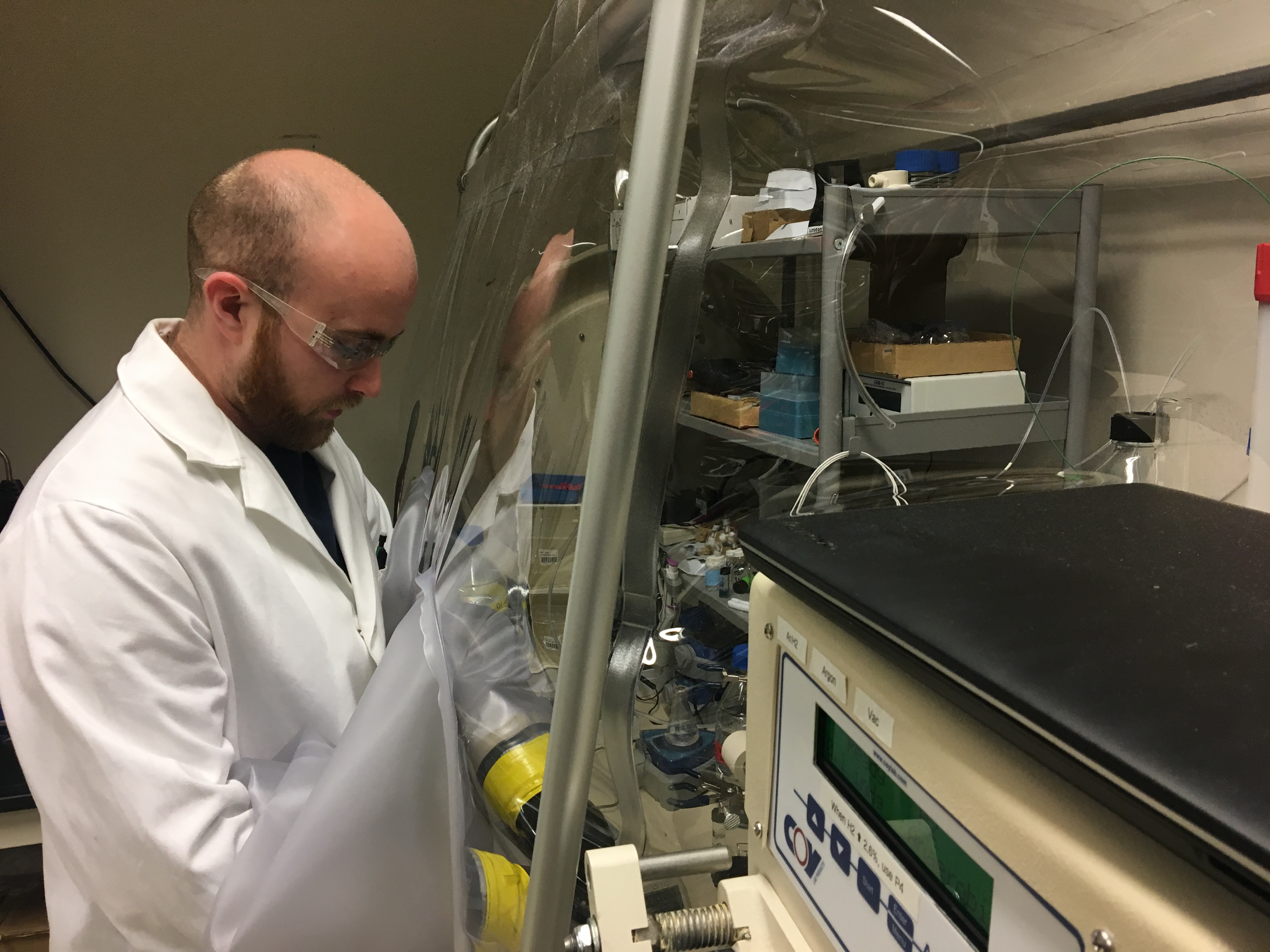 Ross Milton works in the glove box used to keep nitrogenase in an oxygen-free environment.

Although chemistry and materials science and engineering professor Shelley Minteer and postdoctoral scholar Ross Milton have only been able to produce small quantities of ammonia so far, their method could lead to a less energy-intensive source of the ammonia, used worldwide as a vital fertilizer.

“It’s a spontaneous process, so rather than having to put energy in, it’s actually generating its own electricity,” Minteer says.

How to make ammonia

Both the Haber-Bosch process (named also for Carl Bosch, who scaled up the process for industrial production) and the process developed by Minteer and Milton are based on fundamental chemical principles. To make ammonia, which consists of one nitrogen atom and three hydrogen atoms, chemists must break the strong bond that holds two nitrogen atoms together, and then reduce the nitrogen, or add electrons and protons to it in the form of hydrogen. In the Haber-Bosch process, hydrogen and nitrogen gas are pumped over beds of metal catalysts, which aid the reaction, at pressures up to 250 times atmospheric pressure and temperatures up to 500 degrees Celsius (932 F). The process currently produces nearly 500 million tons of ammonia every year. 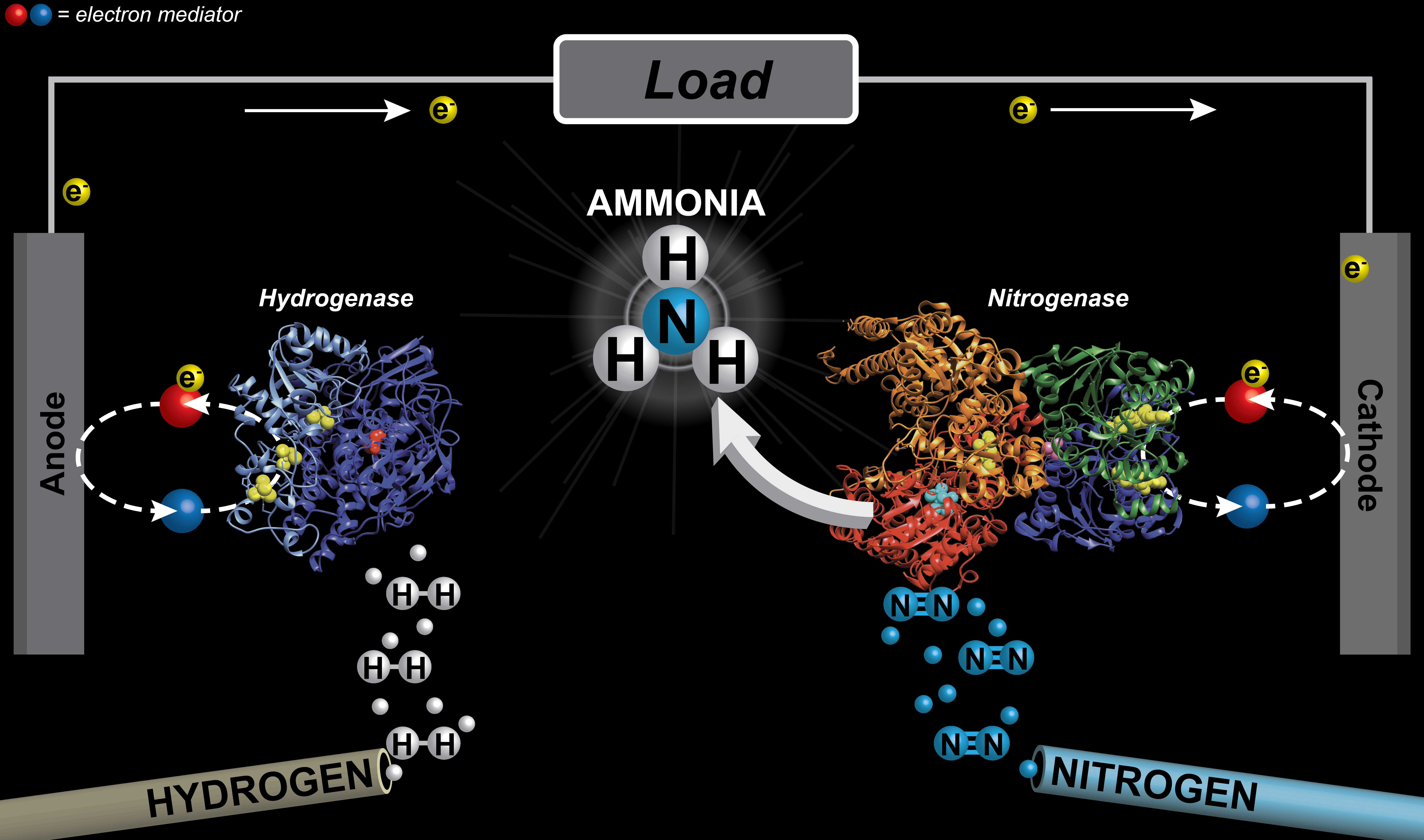 A diagram of the chemistry used in a hydrogenase-nitrogenase ammonia producing fuel cell.

In biology, conversion of gaseous nitrogen to ammonia is called nitrogen “fixation” and is accomplished through several pathways, including through enzymes called nitrogenases. Used by some bacteria, nitrogenases are the only known enzymes to reduce nitrogen to ammonia. Nitrogenase is rarely studied in fuel cell applications, because the enzyme is not commercially available and must be handled in an oxygen-free environment.

“One of the things my group does well is designing the interface between the enzyme and the electrode, so the enzymes can communicate with electrode surfaces,” Minteer says. 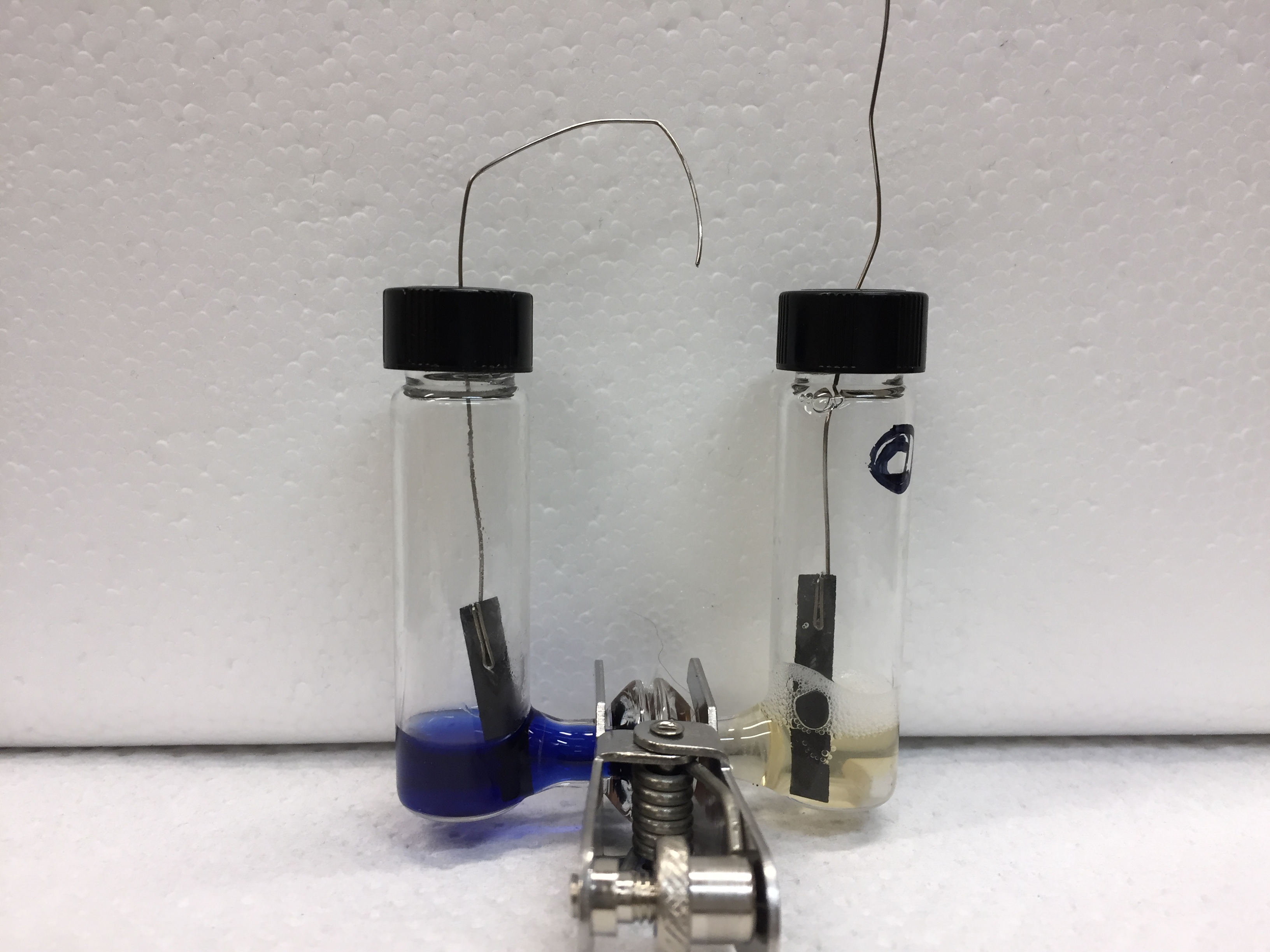 Assembled H2/N2 fuel cell. Carbon paper electrodes are inserted into the anodic (left hand side) and cathodic (right hand side) chambers of the fuel cell.

Minteer and Milton envisioned a fuel cell system that replicated the biological process of nitrogen fixation, using nitrogenase and hydrogenase, an enzyme graciously provided by Minteer’s collaborators at the Instituto de Catalisis y Petroleoquimica in Spain, to strip electrons from hydrogen gas and provide them to the nitrogen-reducing reaction.

The cell consists of two compartments, connected via carbon paper electrodes. In one vial, hydrogen gas is oxidized by hydrogenase and electrons are carried to the anode. In the other, electrons come off the cathode and are combined with nitrogen, via nitrogenase, to create ammonia.

The electrons move from the anode to the cathode via a circuit. Protons (oxidized hydrogen atoms) travel through a membrane between the anodic and cathodic chambers, supplying the hydrogen atoms needed to synthesize ammonia.

The movement of the electrons creates current, and is the source of the small amount of electrical power generated by the reaction.

Several challenges remain to be overcome before Minteer and Milton’s small-scale process can find application at an industrial scale. One is the oxygen sensitivity of nitrogenase, another is the requirement of chemically-expensive ATP, a source of energy in cells and in nitrogen fixation. Milton says that re-engineering the reaction to circumvent the need for ATP would take the fuel cell “to the next level.” Until then, he says, the most notable and impactful aspect of this work is the production of ammonia without the massive energy drain characteristic of the industry standard process.

“The real thing is not the quantity of ammonia produced, but that it’s possible to make electricity at the same time,” Milton says.