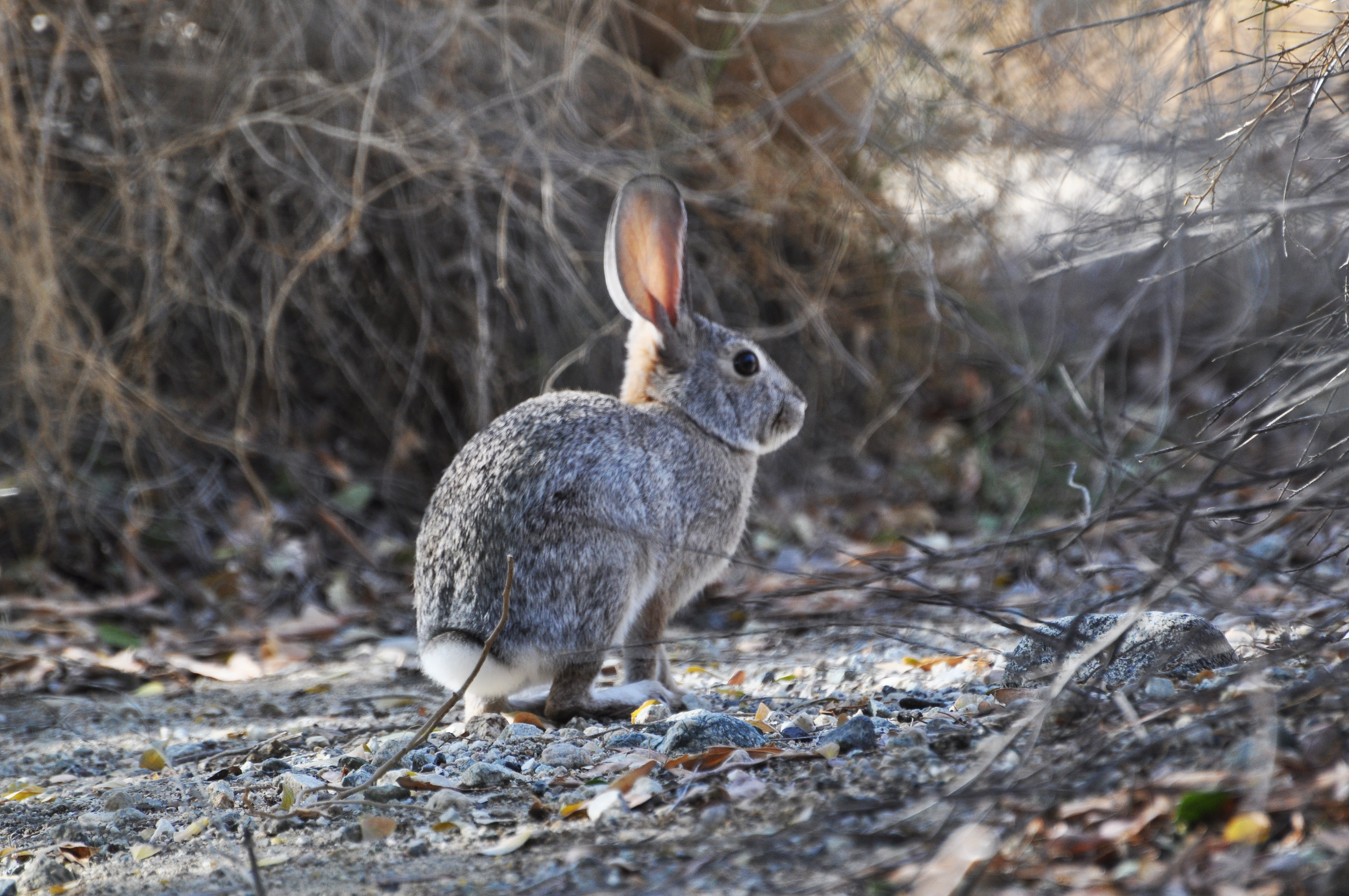 June 4, 2015 – At times during the past 10,000 years, cottontails and hares reproduced like rabbits and their numbers surged when the El Niño weather pattern drenched the Pacific Coast with rain, according to a University of Utah analysis of 3,463 bunny bones.

The study of ancient rabbit populations at a Baja California site may help scientists better understand how mammals that range from the coast to the interior will respond to climate change, says anthropology doctoral student Isaac Hart. He is first author of the study to be published in the July issue of the journal Quaternary Research.

During the past 10,000 years, the number of El Niños per century “correlates very strongly with the total rabbit population in Baja California, as well as relative abundance of the moisture-loving species of rabbits,” Hart says.

“There weren’t many El Niños from 10,000 to 5,000 years ago,” perhaps zero to two per century, says the study’s senior author, anthropology professor Jack Broughton. “After 5,000 years ago, there was a relatively dramatic increase in frequency of El Niños in Baja, and the rabbits go through the roof.”

Broughton says the new study “is the first long-term – in thousands of years – record of vertebrates responding to El Niño or any other climate system” and the resulting rainfall-caused increase in plants the rabbits ate. “Our study contributes to the growing understanding of variables that enable threatened species to persist despite the myriad threats they face in an uncertain climatic future. The longer record we’ve provided here should ultimately allow us to better predict how El Niño will vary in the future, and how animal populations will vary as a result.”

Compared with earlier studies of lagomorphs – rabbits, hares and pikas – in Utah and elsewhere in the Great Basin during the last 10,000 years, the new study shows lagomorphs “are harmed less by temperature changes on the coast than in the interior,” Broughton says. “Threatened species will be more vulnerable as distance increases from both the temperature-ameliorating effect of the Pacific Ocean and the reach of El Niño-based precipitation.”

The study involved analysis of 3,463 cottontail rabbit and hare bones separated from more than 1 million small bird and animal bones deposited over the past 10,000 years at Abrigo de los Escorpiones – Shelter of the Scorpions – a rock cliff shelter near the ocean 95 miles south of Tijuana, Mexico.

Hart and Broughton conducted the study with University of Alberta archaeologist Ruth Gruhn. She excavated the site a decade ago with Alan Bryan, her late husband. Funding was from the Ruth Eleanor Bamberger and John Ernest Bamberger Memorial Foundation via the University of Utah Undergraduate Research Opportunities Program (Hart began the study as an undergraduate) and the Natural History Museum of Utah. 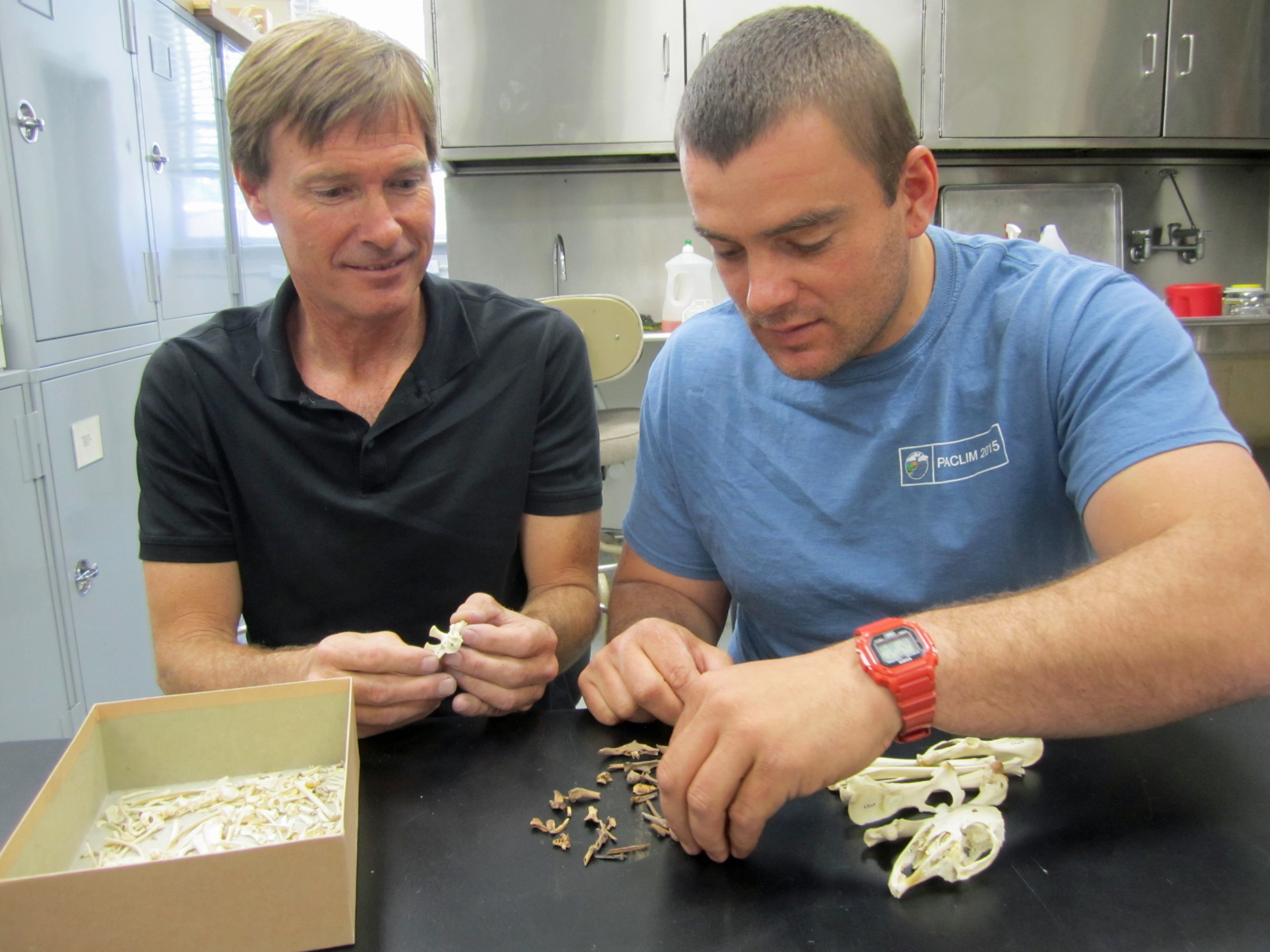 University of Utah anthropology professor Jack Broughton and doctoral student Isaac Hart examine ancient bones of rabbits and other small mammals. In a new study, they found that at times during the past 10,000 years, rabbit and hare populations boomed in Baja California, Mexico, when the El Niño climate phenomenon drenched the Pacific Coast with rain, promoting growth of plants eaten by the animals. The study might help researchers better understand how future climate change will affect small animals.

Fifteen bankers boxes containing 1 million bones of various animals from Shelter of the Scorpions were shipped to Utah in 2008. The rabbit study is the first published on any of the bones. All the bones ultimately will be sent to a Baja museum.

The 3,463 rabbit and hare bones averaged about 2 inches in size, and ranged from one-thirteenth of an inch up to jackrabbit leg bones 4 or 5 inches long.

Hart spent 2010-2014 identifying each bunny bone as one of three Baja species, using 13 skull and jaw measurements, then comparing their proportions to 80 museum specimens of the same species.

“This study shows you can ask really detailed questions about prehistory given the right set of bones,” Hart says.

The study involved bones from two species of cottontail rabbits – Sylvilagus bachmani, the brush rabbit, and Sylvilagus audubonii, the desert cottontail – and one species of hare, Lepus californicus, the black-tailed jackrabbit.

The brush rabbit eats grasses and forbs in or near dense brush, and thrives when there is more moisture. The desert cottontail has a similar diet but can tolerate drier, more open conditions. The jackrabbit thrives in sparse vegetation.

Those three species accounted for all the bunny bones found at the Shelter of the Scorpions, which is not a cave, but a volcanic rock outcrop that forms a cliff on which eagles, hawks, falcons, owls, other raptors and ravens sat and ate their prey. For millennia, the bones fell to the bottom of the cliff and accumulated in deposits called middens. (Gruhn named the shelter for scorpions there when excavation began.)

Ancient humans also used the shelter and left stone tools and ash from fires. The rabbit and hare bones lack burns or cut marks, so they were dumped by birds, not people.

There is no direct record of ancient El Niños at the Baja site. So Hart and Broughton used a detailed, 10,000-year history of the climate phenomenon recorded in lake deposits in Ecuador as a proxy for the Baja site. Hart says El Niño is a global phenomenon, and its characteristic warming of the eastern Pacific results in heavier rains along the Pacific coast of North, Central and South America.

The study used four indices of bunny abundance to analyze how the animals responded to El Niños. All four had statistically significant correlations with the number of El Niños per century and higher eastern Pacific sea-surface temperatures.

“There’s been much work on the long-term trends in small mammals in western North America,” Broughton says. “Almost all that work has been within interior sites, not the coast. For those interior sites – many are in Utah – temperature change was documented as the most critical factor in influencing small mammal populations over the last 10,000 years. This study is the most detailed of a coastal site over such a long period of time, and it shows precipitation is the dominant factor.”

Climate context: from the desert to the sea

Here is the current theory of climate history for the Great Basin (Nevada, Utah and parts of Oregon, California and Arizona): Climate was relatively cool and moist during the early Holocene Epoch from 10,000 to 8,000 years ago, then warmer and drier during the middle Holocene from 8,000 to 4,000 years ago, followed by a relatively wetter climate similar to today’s for the past 4,000 years, the late Holocene.

During the middle Holocene, the drier, warmer climate reduced Great Basin populations of pygmy rabbits and pikas, and drove them to higher latitudes and elevations. In addition, cottontail rabbits that loved thicker sagebrush were dominant during the wetter early Holocene, but hares that thrive in open desert dominated during the drier middle Holocene.

Earlier research indicates somewhat different patterns in Baja. The period from 10,000 to 8,000 years was relatively wet, and then it was relatively dry until about 5,500 years ago, when the modern pattern of periodic El Niños began.

That onset of more frequent precipitation correlated with the new study’s Baja bunny booms, with three or four of those booms happening during middle Holocene El Niños when the Great Basin was still dry and its rabbits and pikas were declining.

Broughton and Hart say the effects of prehistoric El Niños weren’t always limited to the Pacific Coast. They note that a spike in the frequency of El Niños about 1,000 years ago coincides not only with a high stand of the Great Salt Lake, but with increases in populations of rabbits, pikas, ungulates like pronghorn and deer, and people in the native Fremont culture – indeed, the largest-ever population density in Utah’s prehistory.

This panoramic view shows the Shelter of the Scorpions, a rock shelter on the Pacific Coast of Baja California, Mexico, 95 miles south of Tijuana, Mexico. During the past 10,000 years, birds of prey and raptors sat atop the cliff eating rabbits and other small animals, and then dropping the bones, which accumulated at the base of the cliff. A new University of Utah study analyzed 3,463 of those ancient rabbit and hare bones to show how heavy rains spurred by the El Niño climate phenomenon caused periodic booms in Baja’s bunny population. 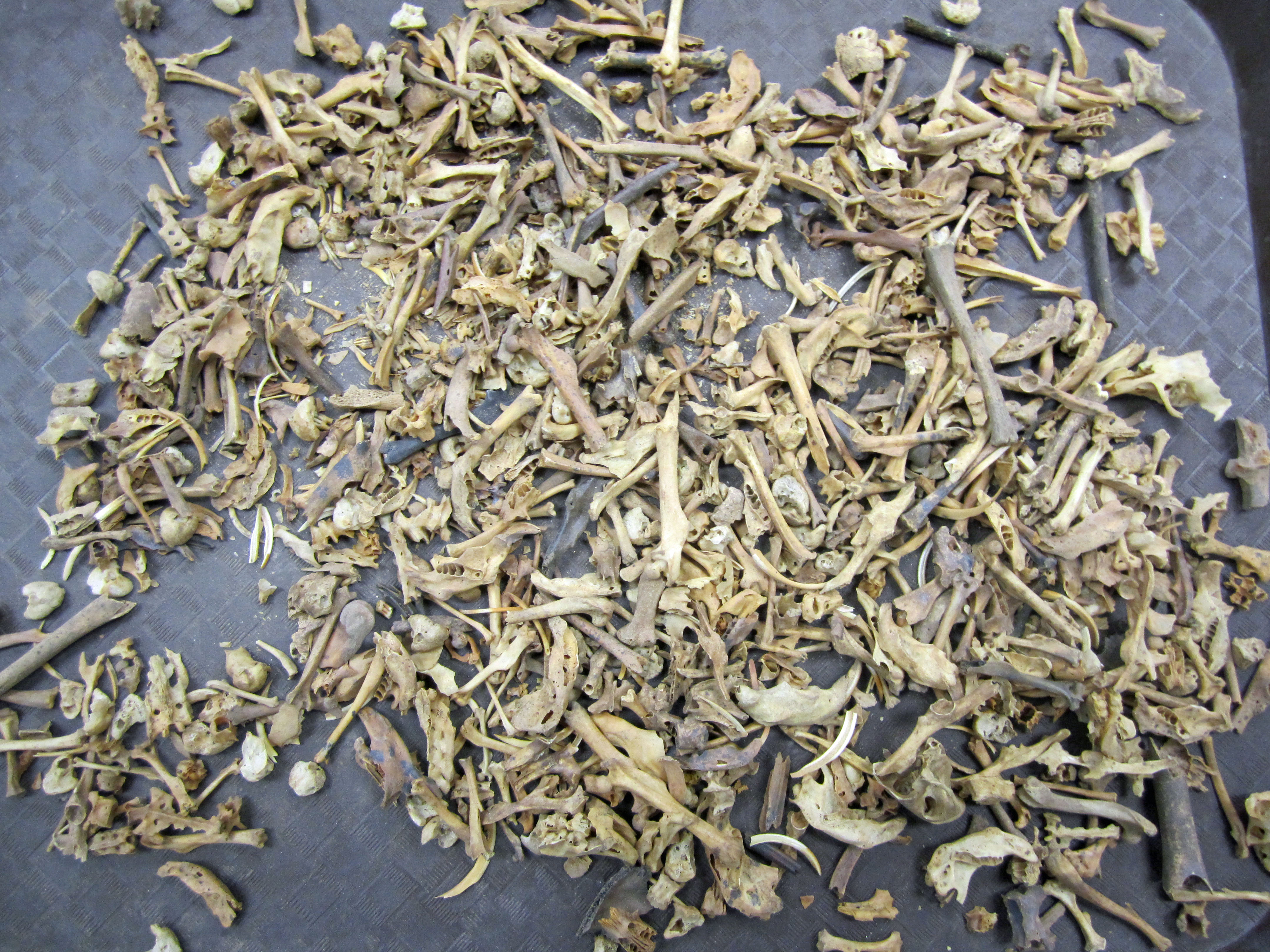 A tray holds bones of ancient small mammals, including rabbits, hares, woodrats, gophers, deer mice and kangaroo rats excavated from the Shelter of the Scorpions in Baja California, Mexico. A University of Utah analysis of 10,000 years of rabbit and hare bones from the site shows how populations of those animals boomed during wet periods when the climate pattern known as El Niño caused heavy rains and resulted in growth of plants to feed the animals.

A desert cottontail rabbit in Palm Springs, California. This was one of three species or rabbits and hares that lived at a coastal site in Baja California, Mexico, during the past 10,000 years. A study of rabbit and hare bones excavated from the Baja site shows how the animals’ populations soared when rains drenched the Pacific Coast during prehistoric El Niño episodes. 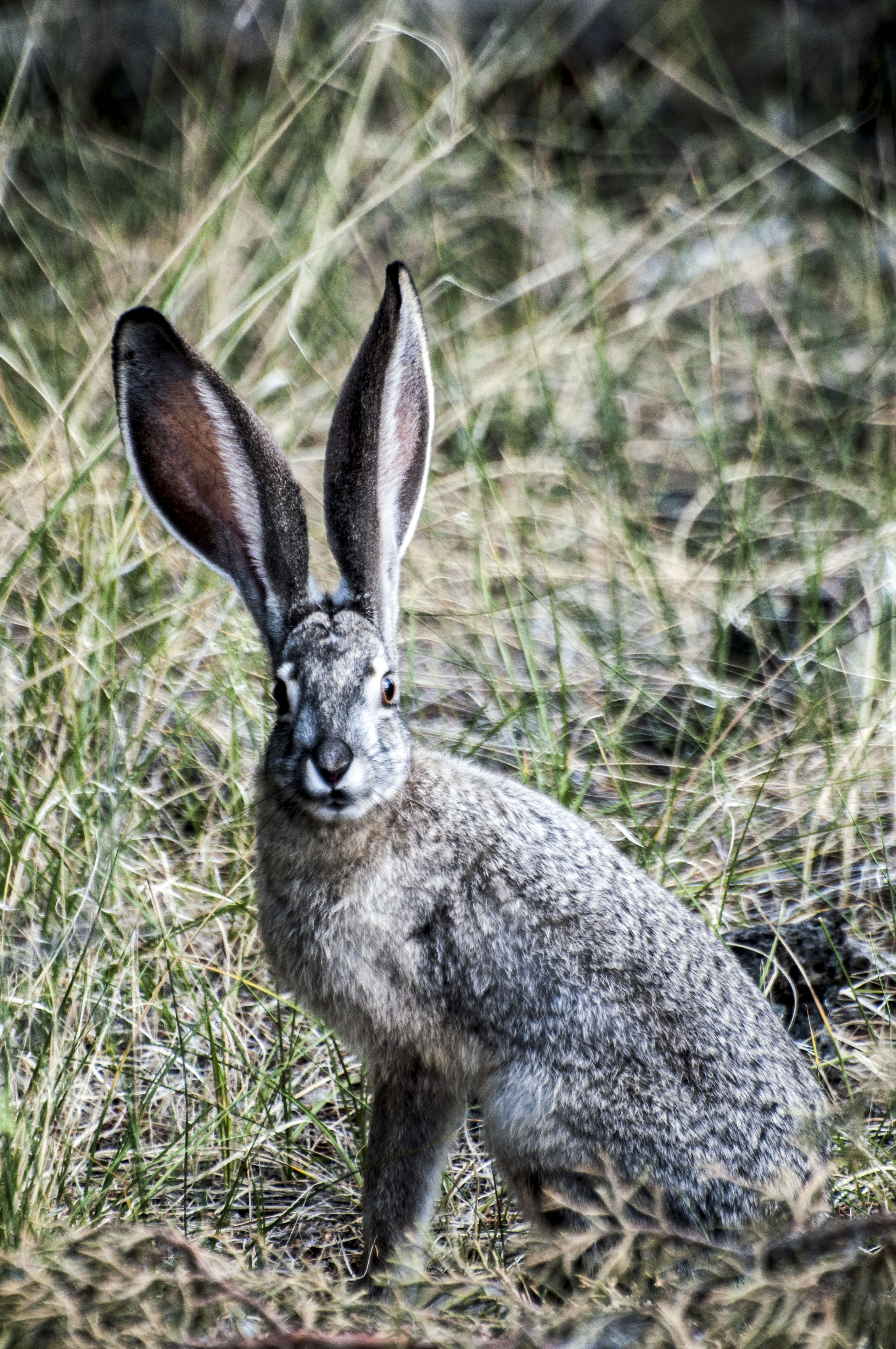 A black-tailed jackrabbit in Lassen County, California. This was one of three species or rabbits and hares that lived at a coastal site in Baja California, Mexico, during the past 10,000 years. A study of rabbit and hare bones excavated from the Baja site shows how the animals’ populations soared when rains drenched the Pacific Coast during prehistoric El Niño episodes. 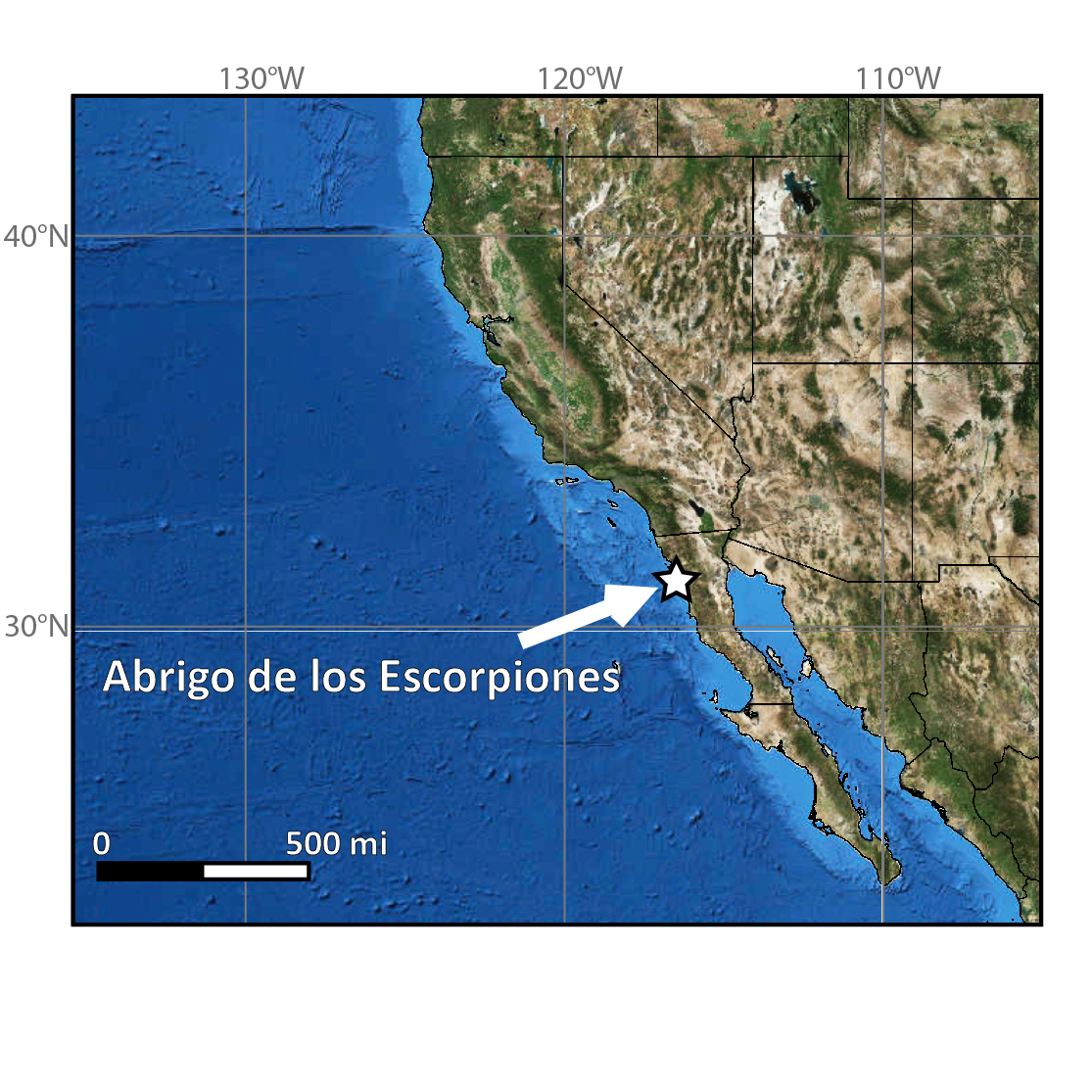 Map shows location of Abrigo de los Escorpiones – the Shelter of the Scorpions – a dig site in Baja California, Mexico, that yielded more than 1 million bones of small animals and birds deposited by birds of prey during the past 10,000 years. A University of Utah study of how rabbit populations boomed during wet times caused by the El Niño climate phenomenon provides clues to how small mammals will respond to future climate change.