Take a look at the clouds, if there are any in your sky right now. If not, here are a few examples. Watch the billows, the white lofty tufts set against the blue sky. Or, depending on your weather, watch the soft grey edges smear together into blended tones that drag down through the air to the ground. 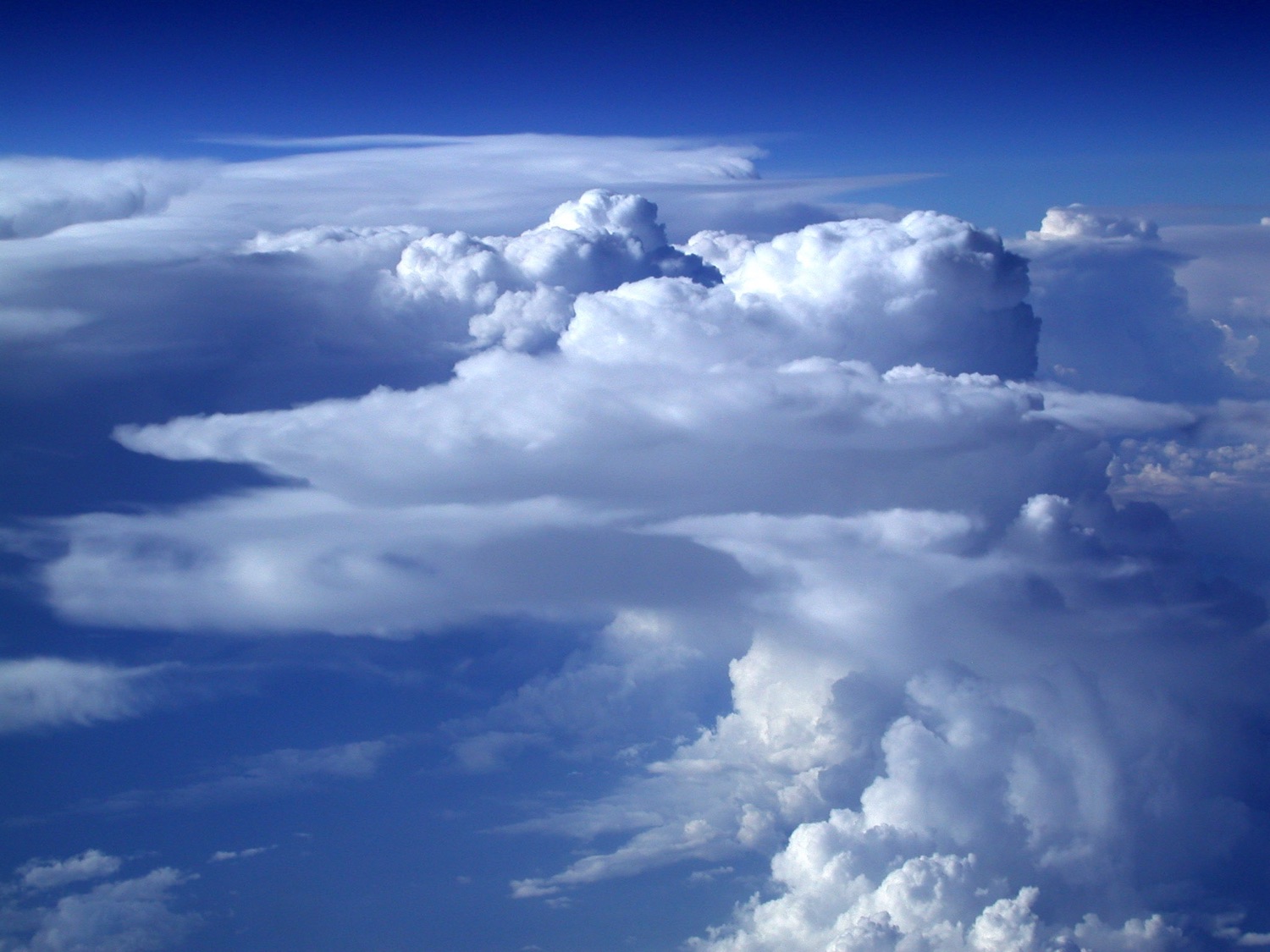 Photograph from the NASA ER-2 research aircraft of deep convective clouds in Florida.

They’re an inspiration to most of us, but a nightmare for climate scientists. Clouds are exceptionally complex creatures, and that complexity makes it difficult to predict how and where they’ll form – which is unfortunate, since those predictions are essential to understanding precipitation patterns and how our climate will change in the future.

But University of Utah researchers may have found a way to greatly reduce the difficulty of predicting formation of clouds. The results, published today in Journal of Geophysical Research-Atmospheres could fill a key gap in scientists’ understanding of how climate change may play out.

“We used simple thermodynamics,” says atmospheric sciences professor Tim Garrett, “to predict that there should be many small clouds and few large clouds in proportions that obey simple mathematical laws.”

Clouds, particularly those in the tropics, are part of the Earth’s system for getting rid of excess heat generated by the sun. That’s why they matter to climate scientists. They’re part of a vertical conveyor belt, lifting hot buoyant air up to an altitude where the heat can be easily radiated into the cold blackness of space. But clouds can play with heat in other ways.

“Think of how quickly a cloud can change the temperature during a summer picnic,” says postdoctoral scholar and study co-author Ian Glenn. “A slight change in the fraction or distribution of even a few small clouds on an otherwise nice clear day can make or break an outing.”

Clouds constantly grow and shrink as they exchange air with surrounding dry air. So far, it’s unclear how clouds factor into the effects of global climate change – will clouds slow down warming? Or enhance it? Will warming create more clouds? If so, what regions will be most affected?

That uncertainty can be seen in the range of values of climate sensitivity, or the temperature response to a doubling of carbon dioxide in the atmosphere. Current projections say the increase could be between 1.5 and 4.5 degrees Celsius. It’s difficult to pin it down much more than that because of the problem of understanding the role of clouds and precipitation in a changing climate.

“Both the low range and high range are bad news for civilization,” Garrett says, “but one is clearly far more catastrophic – so it’s a pretty important problem to get right.”

Rotation around a 20 km x 20 km (15 km tall) selected region from the Giga-LES. The full simulation analyzed contained about 100 such areas, although not all of them were so cloudy. A relative distribution of many small clouds and a few large clouds is apparent.

Researchers previously approached the problem of clouds by trying to understand the layers of complexity inherent in how clouds interact with the surface, the air and even themselves. Study co-author Steven Krueger says that the physical processes in clouds range from cloud droplets, at the micrometer scale, to large-scale cloud systems that can stretch over a continent. And the inherent turbulence of clouds creates eddies – spirals of turbulent energy – that stretch the predictive power of even the best models of clouds run on supercomputers.

“To model all scales of the global atmosphere, from the smallest turbulent eddies to the global scale would take about a billion billion times what can we currently use in our computers,” Krueger says. “We can fully calculate all of the cloud physics in a volume about 1 meter on a side, for about 10 minutes, at a computational cost of 10,000 CPU hours.”

To get around that complexity, climate modelers simulate large scales while making simplifying assumptions about small-scale processes. But what if there’s another way – what if clouds follow simple mathematical principles that can recreate the statistics of clouds’ complexity without needing massive computing resources? 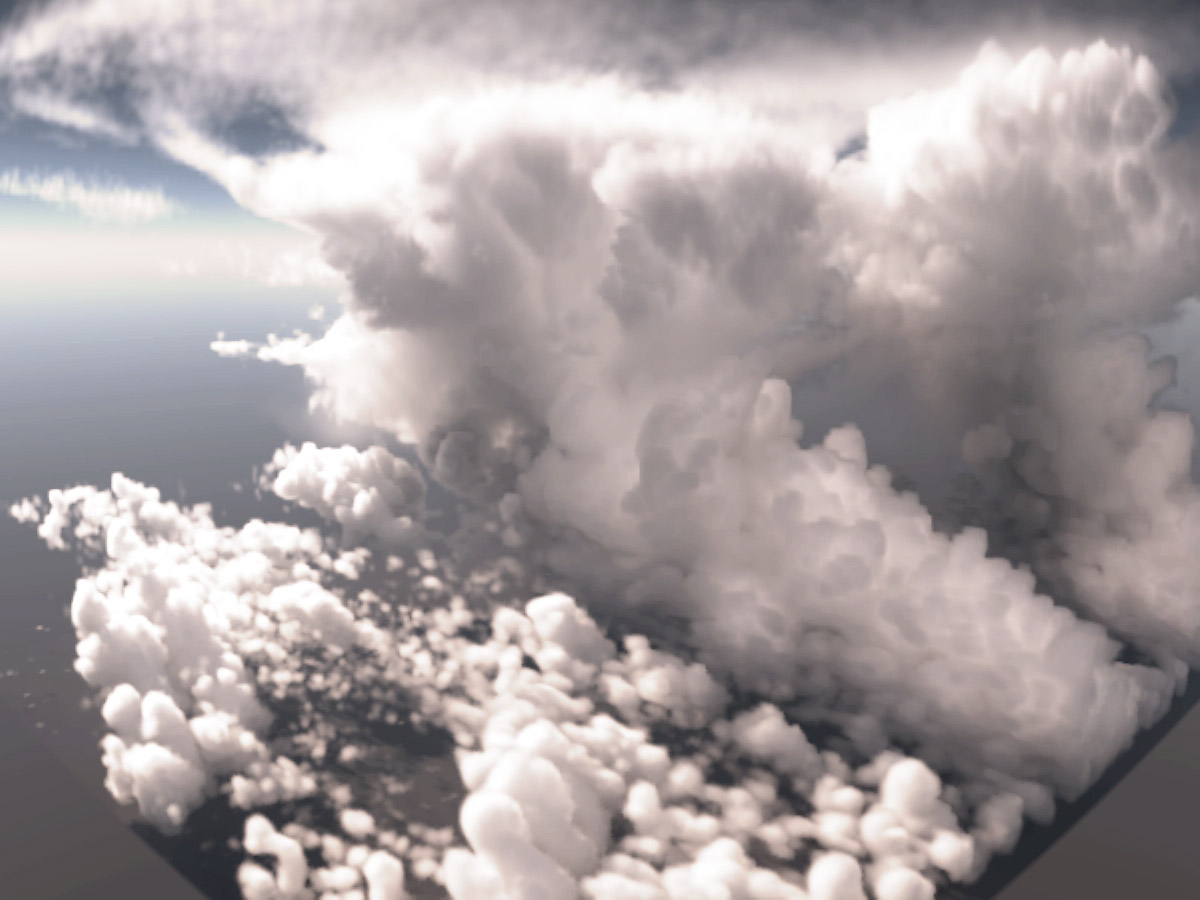 Let’s go back to the concept of clouds as conduits of heat into the upper atmosphere. A tall, sharp, white cloud is composed of droplets of water, in contrast to the clear, blue, relatively drier air around it. The white, wet clouds and the blue, dry air are in constant contact with each other, sharing a common boundary. It’s this boundary that got Garrett thinking.

As water droplets form inside clouds, a little bit of heat is released, making the clouds buoyant in the atmosphere. Garrett says that this makes clouds efficient at their job of lifting heat away from the ground – and also means that the hot, rising air is turbulent and can spill out of the sides of the cloud as it rises.

“This realization about clouds as leaky conduits made me think that the place to look for understanding clouds and climate was not their areas looking down, as has commonly been the focus, but instead their edges,” Garrett says.

He began studying the thermodynamics along the perimeters and edges of clouds, and found that the total horizontal perimeter of clouds, turbulent exchanges of heat and humidity across cloud edges and the vertical temperature and humidity profile of the atmosphere could all be related. One notable upside: atmospheric vertical temperature and humidity profiles are relatively simple to predict in changing climates so the link to cloud amount simplifies a notoriously difficult problem.

Some other principles of cloud dynamics that arose from the authors’ equations: Competition among clouds for atmospheric heat and moisture helps explain how many clouds form. The product of the number of clouds and their perimeter remains constant, a mathematical law known as scale invariance. This means that a large number of clouds are poor in perimeter while a lucky few are rich. Also, these relationships between different size classes of clouds turn out to be independent of the atmospheric temperature. More on that in a minute.

The full 205 km x 205 km simulation domain. One hour of time is simulated, with five minutes per frame. Yellows and reds are updrafts, blues are downdrafts, and the grey surface denotes air of a certain temperature.

Garrett and his colleagues tested their theoretical findings by comparing their statistical model to one of the mega-models of cloud formation, the Giga-LES model. It simulates a full 24 hours of atmospheric time over a 150-square-mile (400-square-kilometer) area at high resolution. One 24-hour simulation takes 300,000 processor hours to complete. Garrett’s model, based on just a few lines of physics equations, reproduced key statistics of the sizes and shapes of clouds in the dynamic Giga-LES model to within 13 percent.

There are things a statistical model can’t do, of course. “It cannot show, for example, a cloud looking like Mickey Mouse showing up at a particular time or place,” Garrett says, “so it is best suited for predictions about long-term climate rather than short-term weather.”

So, what does this mean for climate change modelers who want to know how clouds will react to warming global temperatures?

“This is quite speculative,” Garrett says, “but the suggestion of our study is that cloud-climate feedbacks may be small, because tropical clouds will rearrange themselves in a warmer climate so as to continue their currently low impact on surface temperatures.” In other words, while the total amount of cloud cover may go up, the proportions of cloud sizes at different altitudes likely won’t change much. If this model is proven out, climate scientists may be able to breathe a little easier knowing that clouds likely won’t be amplifying global warming.

“If these cloud feedbacks are smaller than previously expected,” Garrett says, “the Earth may not warm as fast as our worst fears.”