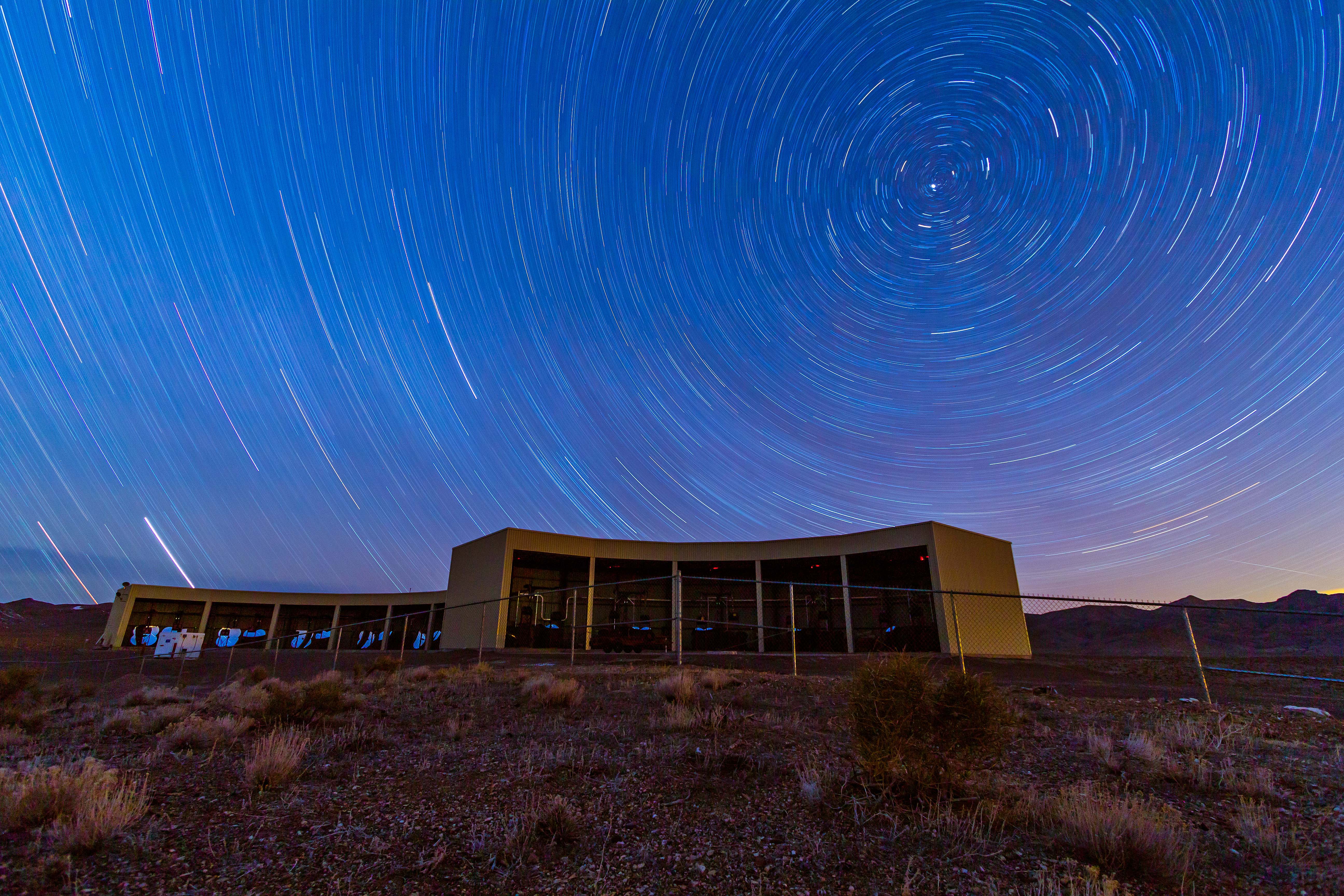 June 15, 2015 – Physicists plan a $6.4 million expansion of the $25 million Telescope Array observatory in Utah so they can zero in on a “hotspot” that seems to be a source of the most powerful particles in the universe: ultrahigh-energy cosmic rays.

Japan will contribute $4.6 million and University of Utah scientists will seek another $1.8 million to nearly quadruple the size of the existing 300-square-mile cosmic ray observatory in the desert west of Delta, Utah.

The expansion will allow the next step aimed at identifying what objects in space produce ultrahigh-energy cosmic rays – subatomic particles so energetic that just one would feel like a lead brick if it hit your foot or a fast-pitched baseball to the skull. Luckily, they don’t get through Earth’s atmosphere.

“The question has been staring us in the face for 40 years,” says Pierre Sokolsky, a University of Utah distinguished professor of physics and astronomy and principal investigator on the Telescope Array’s current National Science Foundation grant.

“We know these particles exist, we know that they are coming from outside our galaxy and we really don’t have a clue as to how nature pumps that much energy into them,” Sokolsky adds. “In order to have a clue, we need to know where they are coming from. This hotspot is our first hint.  We need to work with astronomers and find out what galaxies or black holes are in this hotspot.”

The planned expansion would make the Telescope Array almost as large and sensitive as the rival Pierre Auger cosmic ray observatory in Argentina. Together, they cover both the northern and southern skies.

Cosmic rays, discovered in 1912, aren’t really rays, but are subatomic particles, including bare protons and nuclei of atoms such as helium, oxygen, nitrogen, carbon and iron, many of which carry relatively low energies and come from within our galaxy from exploding stars, other stars and the sun. But the source of ultrahigh-energy cosmic rays – which are mostly bare protons – is a mystery.

Many astrophysicists suspect they come from active galactic nuclei, in which matter is sucked into supermassive black holes, a process that spews jets of matter and energy outward. Other hypothesized sources of ultrahigh-energy cosmic rays include gamma ray bursts from exploding stars, noisy radio galaxies, shock waves from colliding galaxies and exotic sources such as the decay of “cosmic strings” or of massive particles left over from the Big Bang that formed the universe 13.8 billion years ago.

How the observatory will expand

Sokolsky outlined these details of the Telescope Array expansion, which team members refer to as “TAx4” for the near-quadrupling of the area covered:

– Japan, which paid for about two-thirds of the existing $25 million observatory, will spend another 450 million yen (currently $3.6 million) to expand the existing array of table-like scintillation detectors that measure “air shower” particles produced when incoming cosmic rays hit nitrogen and other gases in the atmosphere.

The array now has 507 detectors spaced in a grid over 300 square miles of desert west of Delta. The expansion will see two lobes containing 400 more detectors added to the array’s footprint, so it will expand to almost 1,000 square miles. One lobe will extend north-northeast from the existing array; the other south-southeast.

– In addition, Japan will kick in another 125 million yen ($1 million) for an “infill” array of another 60, much more closely spaced, scintillation detectors to better measure air showers generated by lower-energy cosmic rays.

While the observatory is focused largely on the mystery of ultrahigh-energy cosmic rays from far beyond our Milky Way galaxy, physicists also want to collect more information on lower-energy cosmic rays produced by exploding stars in our own galaxy.

– The University of Utah will apply this fall for a $1.8 million grant from the NSF to add two fluorescence detectors to the three existing ones at the Telescope Array. Each fluorescence detector is a building containing many mirrors that detect faint blue flashes in the sky created when incoming cosmic rays hit gases.

Japan’s funding is approved and a decision on the University of Utah’s grant request is expected early in 2016, Sokolsky says.

He says the researchers also must gain approval to expand onto more public lands owned by the U.S. Bureau of Land Management and Utah’s School and Institutional Trust Lands Administration. The existing observatory sits mostly on land owned by those two agencies and on some private land.

Discovery of the hotspot was the impetus for the planned expansion, Sokolsky says. The discovery was announced by an international team of 125 scientists – including 32 from the University of Utah – in July 2014 when their findings were accepted for publication in Astrophysical Journal Letters.

During a five-year period, the Telescope Array detected 72 of the highest, ultrahigh-energy cosmic rays – those with energies above 57 billion billion electron volts (5.7 times 10 to the 19th power).

Of the 72 superenergetic particles, 19 came from the direction of the hotspot – a 40-degree-diameter circle representing 6 percent of the northern sky and located a couple hand widths below the Big Dipper. (The hotspot is centered at right ascension 146.6 degrees and declination 43.2 degrees.) Only 4.5 ultrahigh-energy particles would have been expected from that area if cosmic rays came randomly from all over the sky.

Astrophysicists say odds that the hotspot is a statistical fluke and not real are 1.4 in 10,000. But they want a much higher level of confidence. The hotspot’s existence “is at the statistical level where it could go either way,” Sokolsky says, adding that without the expansion, “we won’t know if it’s real unless you want to stick around for 40 years.”

“We see this intriguing clustering of the highest-energy cosmic rays coming from one area of the sky,” he explains. “But the rate at which we detect them is very low. We get at most 20 events a year at the highest energies. To get to a point where we can really study this with good sensitivity, we need to increase that rate by at least a factor of four.”

That can be done by nearly quadrupling the ground area covered by the scintillation detectors and adding two more fluorescence detectors, he adds.

The proposed expansion plan was discussed June 8-10 when the Telescope Array collaboration met at the University of Utah for its twice-a-year meeting. Sokolsky says the visitors included about 20 researchers from Japan and several more from Russia and Belgium. South Korea also is part of the collaboration.

The highest-energy cosmic ray ever measured was detected over Utah in 1991 by the University of Utah’s Fly’s Eye observatory at the U.S. Army’s Dugway Proving Ground – a predecessor to the Telescope Array. That cosmic ray particle carried energy of 300 billion billion electron volts (3 times 10 to the 20th power).

Cosmic ray research in Utah dates to the 1950s, when University of Utah researcher Jack Keuffel conducted studies in a Park City silver mine. In 1976, University of Utah physicists built a prototype cosmic ray observatory in New Mexico, followed in 1980-1981 by construction of the Fly’s Eye, which was improved in 1986 and then, during 1994-1999, upgraded and renamed the High-Resolution Fly’s Eye.

The Telescope Array, built for $17 million, started operations in 2008 and later was upgraded, bringing the cost to about $25 million, of which Japan financed about two-thirds and the United States about one-third, mainly through the NSF and University of Utah.