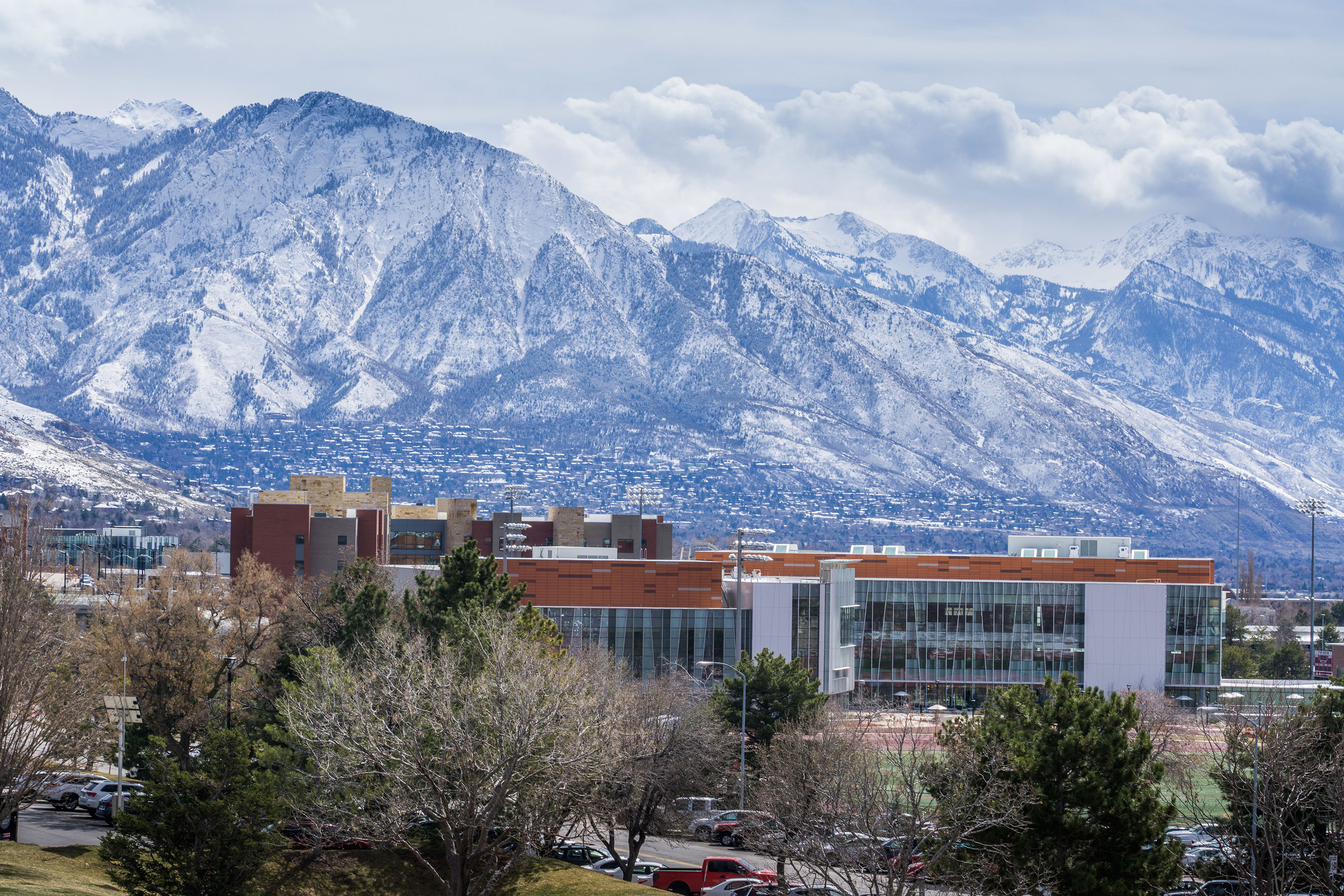 Utah’s Wasatch Mountains are famous for having “The Greatest Snow on Earth.” Snow-seekers in pursuit of world-class skiing and snowboarding contribute over a billion dollars annually to the economy. Snowmelt also provides the majority of water to rapidly growing populations along the Wasatch Front, including Salt Lake City. Understanding what controls snowmelt timing and magnitude is critical for Utah.

It’s more complicated than warming air temperatures; the sun’s energy and longer daylight hours in the spring are the main drivers of snowmelt. Like wearing a black shirt on a hot day, anything that darkens the snow surface—such as dust—will absorb more sunlight and accelerate melting. As humans continue to alter landscapes, dust is more likely to blow onto nearby peaks. Yet scientists are just beginning to understand the impact of dust on snow.

A new University of Utah study analyzed the impacts of dust deposition at an alpine study plot in Alta, Utah in the Wasatch Mountains. For the first time, researchers measured dust in the air and in the snow simultaneously. They found that a single dust storm on April 13, 2017, deposited half of all dust for the season. The additional sunlight absorbed by the dust darkened the snow surface, and led to snow melting a week earlier.

The Great Salt Lake has been shrinking as more people use water upstream.

Using computer simulations, the team modeled where the dust originated. They found that first, ahead of the storm, dust came from the south, but then shifted to the west. The westerly winds brought dust from “hot spots” in the Great Salt Lake’s dry lake bed, a relatively new dust source due to historically low lake levels.

“What’s important about the Great Salt Lake is that there are no water rights, no policy to maintain lake levels. As the lake declines, dust events are projected to become more frequent,” said McKenzie Skiles, assistant professor of geography at the U and lead author of the study. “Anything that impacts snowmelt could have economic and hydrologic consequences. And now one of the dust source regions is right next door. Could we could do something about it by enacting policy that maintains a minimum lake level?”

The study published online on December 21 in the journal Environmental Research Letters.

Snowmelt in the Wasatch

From snow properties and dust concentrations at Atwater Study Plot, researchers estimated the acceleration of melt due to dust. They found that the dusty snowpack melted about a week earlier.

Skiles and her team observed five dust events during the spring of 2017, but focused on a single storm on April 13 because it deposited the largest volume of dust, and because the dust seemed to be coming from the Great Salt Lake dry lake bed. The team collected data at the Atwater Study Plot, near Alta Ski Resort in Alta, Utah. They collected data in three ways. First, they sampled the size and number of air-borne particles. Second, they excavated pits to analyze the snow’s properties and sample dust concentrations. Third, they used computer simulations to estimate where the dust came from, and where it would be expected to go. They were confident in the simulations because they captured the patterns in samples from the air and snow.

To measure how the dust impacted the snow, Skiles calculated the difference in energy absorption between snow darkened by dust, and the same snow if it had remained dust free. The equation incorporates snow properties such as snow grain size, snow density, depth and aerosol mixing. The overall impact from dust was to accelerate melt by 25 percent. 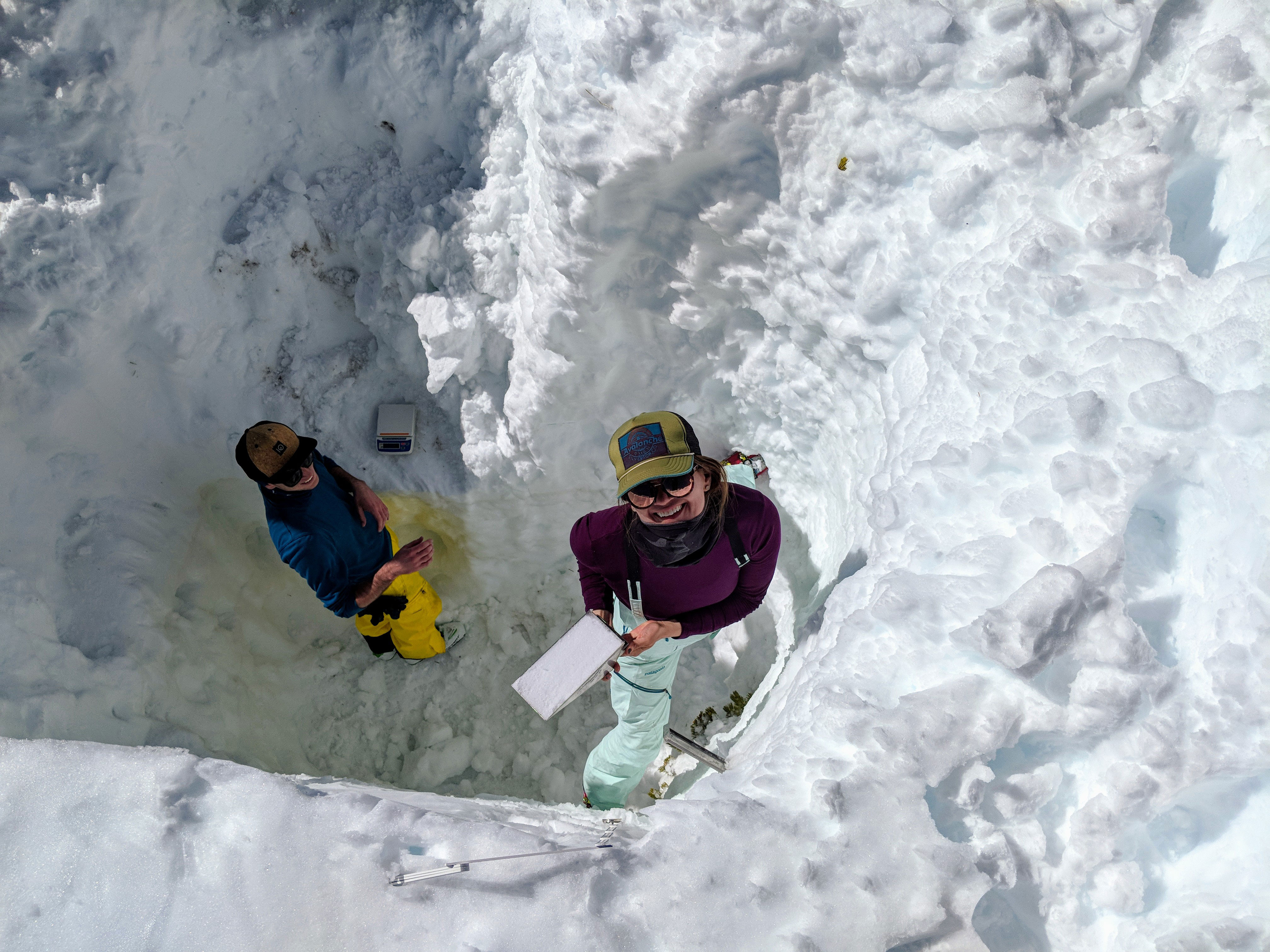 McKenzie Skiles (right) measures snow density, which is used to estimate the amount of water in the snowpack.

They found that most of the dust was deposited about an hour after the actual storm passed through, in the so-called “post-frontal” winds. Sources such as the Great Salt Lake Deseret were the largest dust emitters; dust from the dry lake bed hotspots accounted for about 10 percent of deposited dust. However, the computer simulations suggest that much of the dust blew north of the study plot. Without snow observations in the region, the researchers were unable to verify higher dust deposition but they hypothesize that the impact was likely greater in the northern Wasatch.

“In most people’s minds, dust is a natural aerosol. But the magnitude and frequency of airborne dust is impacted by human activity, altering landscapes makes dust more likely to get picked up by wind,” Skiles said. “We know that since settlement of the West, the amount of dust in the air has increased. And at the same time, due to upstream water withdrawals, lake levels are also declining, exposing even more dust.”

Dust is a global problem 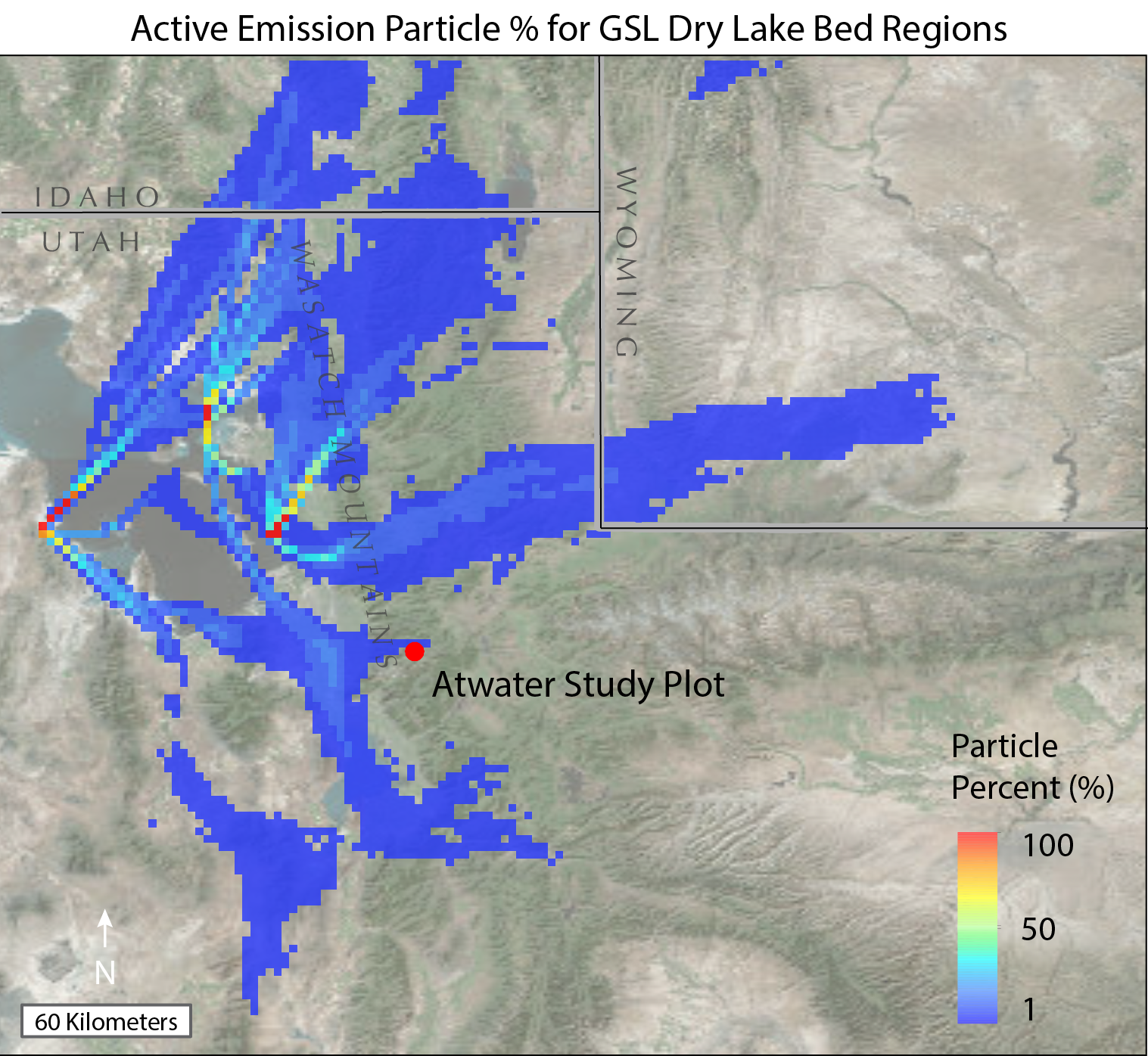 Dust from the dry lake bed of the Great Salt Lake did deposit at Atwater Study Plot. The majority of the dust from the April 13-14 dust event, though, blew north of the site, suggesting that the impact of dust on snowmelt was bigger in the northern Wasatch Mountains

In October, Skiles co-authored a paper that reviewed literature on the growing global issue of “light absorbing particles” on snow in the journal Nature. The climate-science community has recognized the impact of aerosols that are clearly linked to human activity, like soot, but have yet to consider other particles that make snow darker and speed up melting.

“Globally snow is in decline and it’s not just from a warming climate—it’s more complicated than that— snow is also getting darker,” said Skiles. “We know that in some places aerosols are impacting water resources, and it’s having this long-term climactic impact. We also know that deposition levels are unlikely to decrease in the future. While we don’t yet understand the exact magnitude of impact, we know that dust warrants more attention.”

Skiles has studied dust on snow in the Colorado Rockies, but wants to continue to look at other mountainous areas.

“I’m interested in looking in Wyoming, Montana and here in Utah because we need the regional perspective—we know that dust has a dramatic impact on snowmelt in Colorado, but what’s the impact like in other places?  If dust isn’t as important in these regions, then what is controlling changing snowmelt patterns?” she asked.