University of Utah President Ruth V. Watkins and Director of Athletics Mark Harlan announced the largest gift in Utah athletics history today in a press conference held prior to the annual Red-White game. The Ken Garff family has pledged $17.5 million for the Rice-Eccles Stadium renovation and expansion.

The Garff family’s record-setting donation will help fund construction of the Ken Garff Performance Zone in the south end zone and is the lead gift in the $80 million stadium project. To date, donors have pledged $32 million of the $35 million sought in philanthropic gifts. The remaining $45 million will be generated through various new revenue sources associated with the project.”

“We are incredibly grateful for the continuing generosity of the Garff family,” said Watkins. “This extraordinary gift will dramatically improve the fan experience at Rice-Eccles Stadium during football games and many other events. My sincere thanks to Robert and Kathi Garff, John and Amy Garff and Matt and Nicole Garff for making this gift possible.”

“The success of our student-athletes and our department relies on the extraordinary generosity of our supporters and the Garff Family has been instrumental in elevating Utah Athletics to unimaginable heights,” said Harlan “This transformational commitment from the Garffs will impact thousands of student-athletes, staff, coaches and fans for years to come and we are forever grateful for their kindness and support of our university.”

“The University of Utah is the alma mater for several generations of the Garff family, so it is an institution near and dear to our hearts,” said Robert Garff, chairman of Ken Garff Automotive Group. “We at Ken Garff believe the greatest asset in a community is the education of our youth. This partnership with the University of Utah is our way to encourage a legacy of opportunity for decades to come as two aspirational brands come together to improve the community for future generations.” 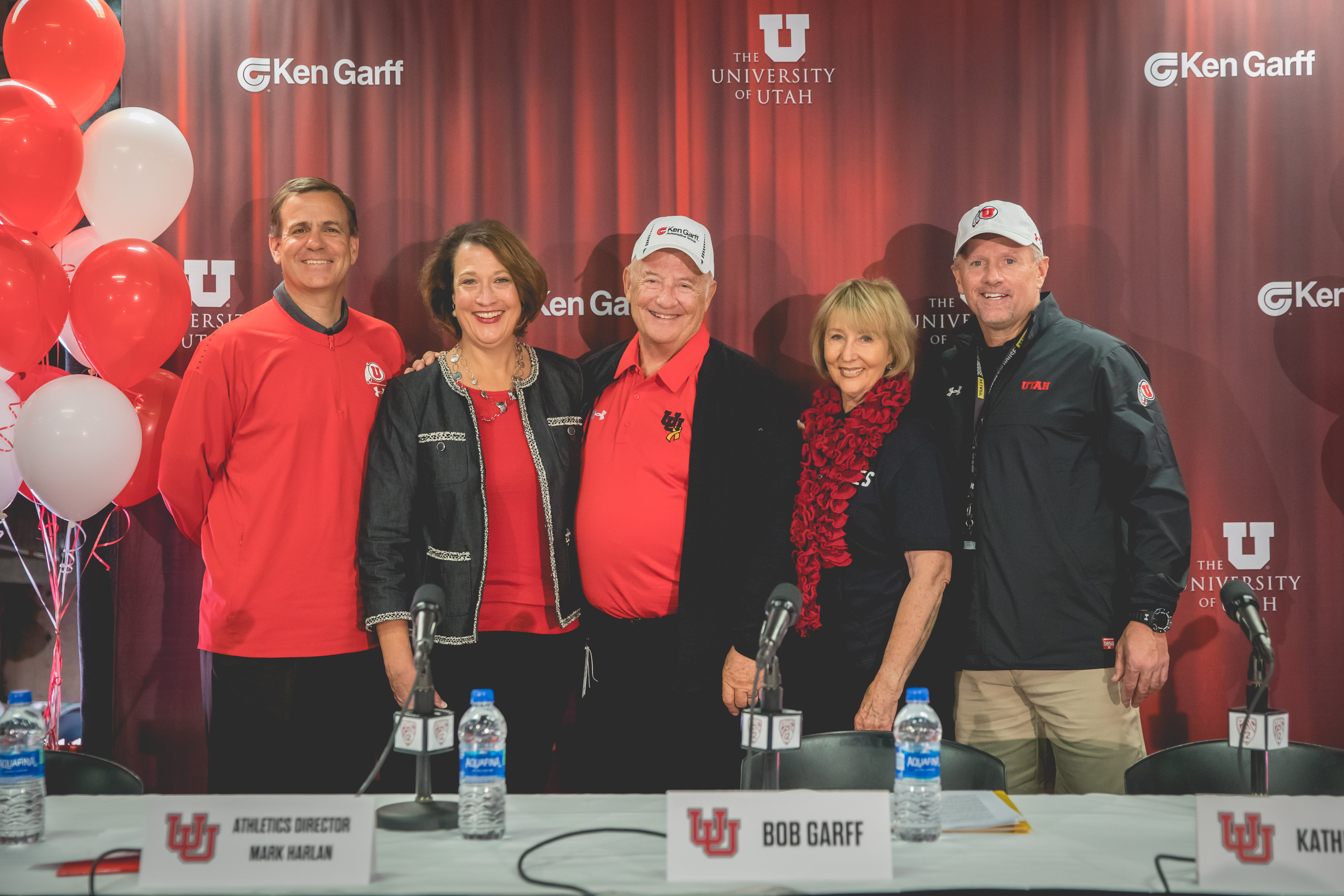 “This generous gift from the Garff family will benefit generations of student-athletes and fans,” said Utah football coach Kyle Whittingham. “Updating the south end zone is the last piece in making Rice-Eccles Stadium truly one of the best college football environments in the country. We are especially grateful that a family enterprise like Ken Garff, whose roots are in Salt Lake City, has made such a significant contribution to our Utah football family.”

The Ken Garff Automotive Group ranks in the top 10 automotive groups nationally, remaining true to Ken Garff’s legacy of making lifelong friends and customers. Ken Garff opened his first dealership in 1932 and quickly built a thriving company that embodied his trademark work ethic and values. The Ken Garff Automotive Group is comprised of 50 dealerships nationwide and sells over 120,000 cars and trucks each year. The automotive group represents iconic brands such as Mercedes, Porsche, Jaguar, Land Rover, Volvo, Audi and more.

The university announced the fundraising campaign in November after a feasibility study demonstrated strong community support and market demand for an expansion and renovation of Rice-Eccles Stadium. The project involves the south end zone—the only feature of the old stadium that remained when the current facility opened on the same grounds in 1998.

The renovations will include enclosing the stadium bowl by connecting the east and west concourses on the south end, increasing audience capacity from 45,807 to 51,444. The Ute football team has played to 56 straight sellout crowds in Rice-Eccles Stadium since the 2010 season opener and the season ticket waiting list has grown to nearly 3,000.

The upgrades will also enhance the fan experience by adding premium seating in luxury suites and loge boxes, as well as club, ledge and rooftop seating. The dilapidated locker and meeting rooms below the current south end zone stands will be replaced and modernized, along with new spaces created for coaches, officials, athletic training, equipment, press operations and the band. A kitchen, recruiting lounge, field-level club lounge and outdoor patio are also in the plans.

Construction will begin after the last home game in 2020 and will be completed prior to the kickoff of the 2021 football season.