On a balmy evening in early June, Space X launched the Falcon 9 rocket, which ferried the Dragon spacecraft toward the International Space Station (ISS). As the Dragon broke the tethers of Earth’s gravity three small, black boxes were safely nestled in its cargo hold. These innocuous boxes house an experiment that may help researchers develop new antidotes for nerve agents used in conflict zones.

Each box holds 30 chambers where crystals of the protein, acetylcholinesterase (AChE), will grow. The protein plays a pivotal role in the normal communication between nerve cells as well as nerve and muscle cells in the human body. When AChE is unable to function, the results are fatal.

AChE is inhibited by a group of chemicals commonly found in pesticides and nerve agents, called organophosphates. Exposure results in tremors, respiratory paralysis and, without an antidote, death. Worldwide, these chemicals are responsible for 200,000 deaths every year.

Antidotes work by reactivating the AChE protein and sweeping excess toxin from the body. The most commonly used FDA-approved antidote—Pralidoxime (2-PAM)—disengages the organophosphate molecule from the AChE protein, which can return to normal functions. The few antidotes that are available for humans are insufficiently effective and slow.

“We need to develop antidotes that are effective against multiple kinds of organophosphates and can cross the blood-brain barrier to more easily reactivate multiple AChE proteins,” said Don Blumenthal, associate professor of Pharmacology and Toxicology at University of Utah Health. “This is particularly important for a mass casualty scenario.” 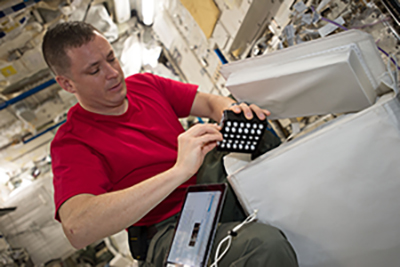 The experiment on ISS begins.

Blumenthal was the catalyst that brought a team of experts together from across the country led by the project’s principal investigator Zoran Radić, associate professor at the Skaggs School of Pharmacy and Pharmaceutical Sciences at University of California, San Diego (UCSD), in the quest for antidotes to these terrible toxins.

Upon arrival at the ISS, astronaut Jack Fisher recovered the boxes and, with a twist of a few levers, exposed capsules that contain the protein solution to a cocktail of various salts and buffers in each chamber. Over the next four months, the cocktail will dehydrate the protein solution, allowing the AChE protein to crystalize and grow in the microgravity of the space station. 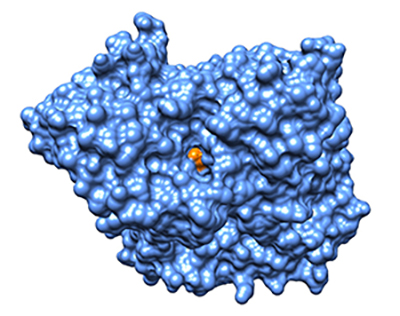 Toward the center of the amoeba-like AChE protein (blue) lies the deep catalytic gorge where the organophosphate (gold) blocks neurotransmitters access to the active site.

Scientists began mapping the structure of the AChE protein several decades ago using X-ray crystallography. Blumenthal, who has spent his career using this technique, describes these structures as mere snapshots of the protein’s structure, captured at a frigid temperature, 100 Kelvin (-280 °F). They revealed a complex protein structure with a distinct, deep chasm, called the catalytic gorge, at its center.

“The catalytic gorge is like a slot canyon,” said Blumenthal. “The conundrum has been how do you get the organophosphate and the antidote molecule into this restricted space.”

In its frozen state, the gorge cannot accommodate either large molecule, much less both at the same time, which has thwarted researchers’ attempts at developing new antidotes.

Deep within the gorge lies the active enzyme site, where the neurotransmitter, acetylcholine, is broken down and antidotes function.

Organophosphates bind to the active enzyme site and block the breakdown of the neurotransmitter.

“The only explanation for how organophosphates and antidotes navigate the gorge is that the protein breathes,” said Blumenthal. 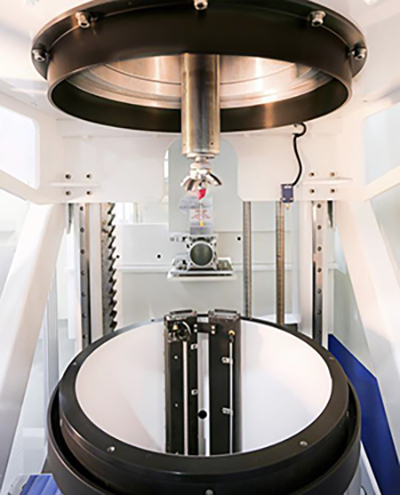 Researchers will image the crystal structure of the AChE protein crystals grown in space on the IMAGINE sample station at Oak Ridge National Laboratory.

“Typically, we only have our imagination to map where the hydrogen atoms are in the crystal structure based on our chemical intuition and knowledge,” said Andrey Kovalevsky, R&D staff scientist in the Biology and Soft Matter Division at Oak Ridge National Laboratory (ORNL). “This doesn’t always give us the right answer.”

While neutron crystallography is more expensive, and less available than X-ray crystallography, Kovalevsky is constantly amazed by the unexpected results. Upon striking the crystal, the neutron beam spreads, producing a diffraction pattern that details the placement of every atom, even the hydrogen atoms, in the structure.

“The structures revealed by neutron diffraction can completely rewrite our understanding of the chemistry behind biological processes, from how enzymes function to the way drugs bind to a target,” Kovalevsky said.

“Crystal growth is an art,” said Kovalevsky. “Every crystallographer struggles with this process to produce crystals that are large enough and still a good quality.”

That was when he had the crazy idea. Send the crystals to space.

“When I arrived at Oak Ridge, I learned about other scientists who tried this path and grew better crystals in space,” said Kovalevsky. Then, he laughed, “Growing up in the Ukraine, I never imagined I would send an experiment into space.”

While crystals in space may only grow slightly larger than their counterparts on Earth, they will grow longer along every dimension of its three-dimensional structure. As a result, the volume will increase dramatically.

In addition, they form in a more highly organized fashion. A crystal is composed of smaller units, which assemble like building blocks in a uniform pattern. In space, those blocks are brought together in a more regular pattern to form a better crystal.

“A bigger volume and a more organized crystal,” said Kovalevsky.  “It’s all connected to produce a better diffraction pattern.”

But Kovalevsky had to scramble. He had less than a year after his colleagues secured a place on a future space flight to re-optimize the system to grow these protein crystals within the confines of a space craft.

The crystals that will return to Earth in four short months will be a compounded crystal, consisting of the AChE protein plus one of three experimental antidotes—two created at UCSD and one widely-tested organophosphate antidote, MMB4. Kovalevsky will subject these crystals to a neutron beam at ORNL.

After nailing down the protein structure, they will use this information in computer simulations to design new molecules that can access the activation site at the base of the gorge. They will synthesize candidate antidotes and compare their effectiveness to the current FDA-approved treatment, 2-PAM.

The researchers must now play the waiting game until the crystals are brought back to Earth. They anticipate the return spacecraft will splash down in the Pacific Ocean in October. The 90 crystals contained within the small, black boxes will have traveled hundreds of miles from Earth to the ISS and home again.

This project is based on pioneering work of Palmer Taylor, Dean Emeritus, Skaggs School of Pharmacy and Pharmaceutical Sciences at UCSD, a co-investigator on the project. Blumenthal, Kovalevsky, and Radić also coordinated with Xiaolin Cheng, computational chemist at ORNL. The group received funding from the National Institute of Health National Institute of Neurological Disorders and Stroke CounterACT Program and National Aeronautics and Space Administration Center for the Advancement of Science in Space.