John A. Moran Eye Center physician-researcher Paul S. Bernstein and his patients at the University of Utah played a key role in the recent discovery of the first genetic cause for a rare eye disease.

Among 250 patients enrolled in the Utah Center for MacTel Genetics, part of an LMRI network of more than 30 centers around the world, a Utah father and son gave Bernstein and LMRI researchers a breakthrough clue. Both had MacTel, along with a rare neurological condition called hereditary sensory neuropathy type 1 (HSAN1). HSAN1 damages the peripheral nerves, typically producing tingling, weakness, and a reduced ability to feel pain and sense hot and cold in the legs and feet. Some patients do not lose sensation but instead feel shooting pains.

Research published in The New England Journal of Medicine (NEJM) on September 11, 2019, “Serine and Lipid Metabolism in Macular Disease and Peripheral Neuropathy,” confirms two of the genetic variants that cause HSAN1 also cause MacTel. 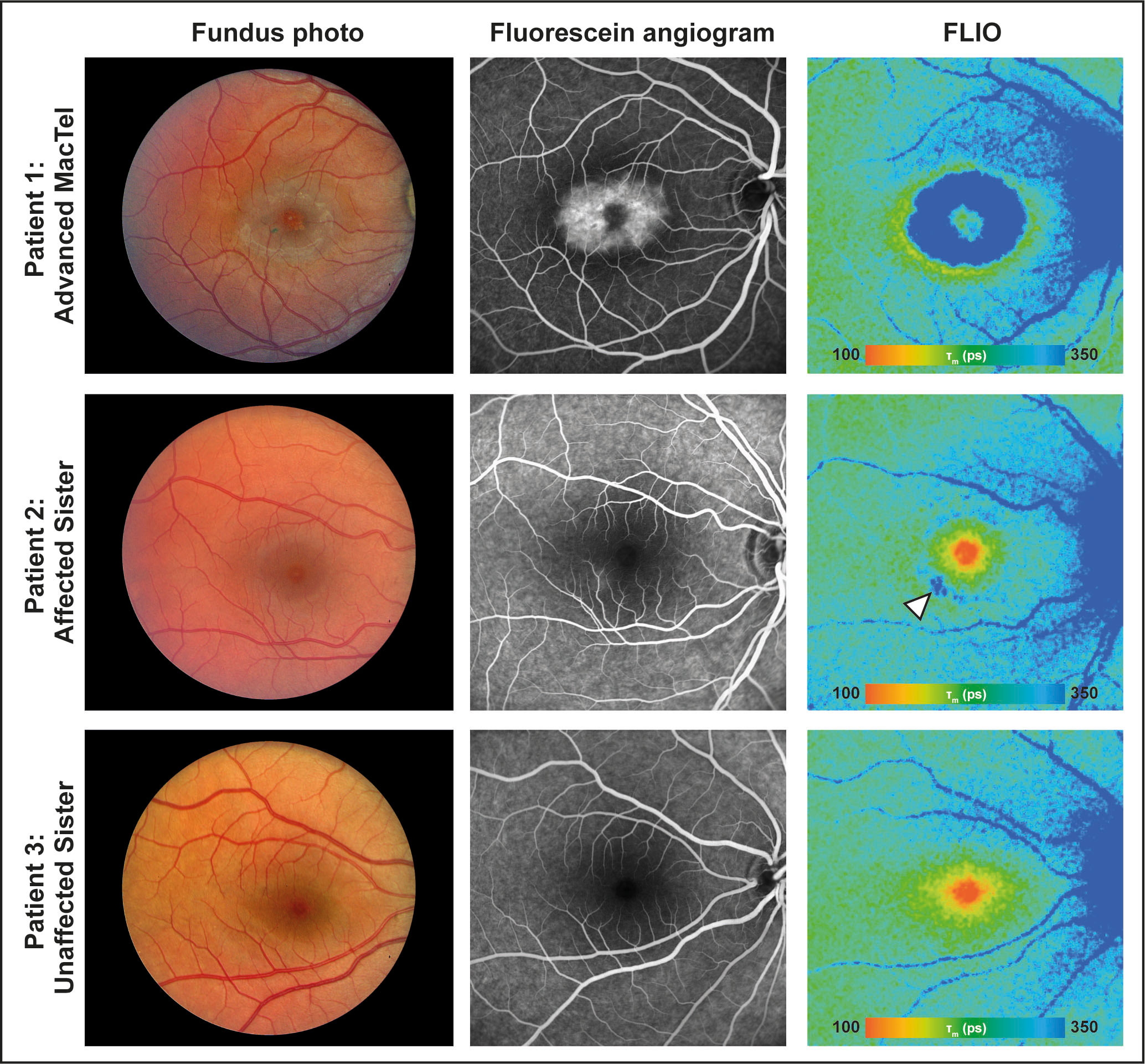 Multimodal imaging of three members of a family enrolled in the Utah Center for MacTel Genetics is shown. Patient one shows signs of advanced MacTel in all imaging modalities; this is evident in the FLIO image by the blue center ring. Patient two, his sister, carries the gene mutation for MacTel but her clinical imaging is unremarkable; her FLIO image is the only modality that shows early signs of MacTel (blue ring, see arrow). Patient three, another sister, does not carry the MacTel gene mutation, and her imaging is normal.

“We believe this will be the first of many genes linked to MacTel,” said Bernstein, one of three senior authors on the NEJM paper and a retinal specialist who directs clinical research at Moran. “This discovery gives patients hope for new treatments, and our research has important implications for other retinal eye diseases.”

HSAN1 is associated with rare coding mutations in SPT genes that lead to accumulation of toxic biomolecules in the body called deoxysphingolipids (deoxySLs). Presumably, these same toxic molecules cause damage to the macula, or center of the retina, in patients with HSAN1 and MacTel.

Working with LMRI and the Deater Foundation, a Pennsylvania-based non-profit dedicated to HSAN1 research, Bernstein and fellow clinicians on LMRI’s MacTel Project conducted comprehensive eye exams on a group of 10 HSAN1 patients unrelated to the Utah family. They found the majority (7/10) of the patients had MacTel.

All HSAN1 patients who did not have clinical signs of MacTel were less than 46 years old and may have been too young to exhibit signs of this late-onset eye disease. Bernstein was able to examine several of these young HSAN1 patients who did not yet show definite signs of MacTel using fluorescence lifetime imaging ophthalmoscopy (FLIO)—an extremely sensitive, non-invasive imaging technology available in the U.S. only at the Moran Eye Center. FLIO images show a characteristic crescent or ring in the macula in all patients affected by MacTel. All of the young asymptomatic HSAN1 patients exhibited the “MacTel signature” in their FLIO images, suggesting that they are at high risk of developing MacTel in the future.

Further research, combining clinical and laboratory studies, showed that many other MacTel patients also had elevated deoxySL levels, presumably due to other genetic defects or low levels of serine, an amino acid that we make and consume in our diets. Elevated levels of deoxySL in the retina were shown to compromise visual function. Low serine and the deoxySLs were not previously known to affect the eye’s macular health.

Laboratory experiments determined fenofibrate, a lipid-lowering medication used for high cholesterol, shows potential for protecting the retina from deoxySLs. Areas of future research includedetermining how widespread the role of deoxySLs is in causing eye disease; finding the pathways that lead to elevated deoxySLs in MacTel; and developing treatment plans based on a patient’s unique genetic and metabolomic profile.

Cell death (green) is observed cross-section of a retinal organoid exposed to deoxysphingolipids. Photoreceptors are red, cell nuclei are blue.

These findings offer potential new insights into other more common eye and systemic diseases, like diabetic retinopathy, liver disease, and metabolic syndrome that are also associated with elevated deoxySLs.

Moran study participant Tami Murphy, a Deater Foundation executive and board member with HSAN1 and possible early signs of MacTel, said she’s grateful for the many collaborators who have worked so hard over the years.

“It’s exciting to be a part of an international research community that is working so hard to shed light on rare diseases, advancing our knowledge of MacTel and HSAN1,” she said.

Lydia Sauer, a research associate in the Bernstein Lab who specializes in FLIO, and Barbara J. Hart, clinical research coordinator at Moran, were among the more than 30 NEJM paper authorsrepresenting 14 institutions in the U.S., U.K., and Australia.

Elizabeth Neffdirector of public relations, communications and marketing at the John A. Moran Eye Center
Elizabeth.Neff@hsc.utah.edu