Sept. 12, 2016— Loss of megaherbivores such as elephants and hippos can allow woody plants and non-grassy herbs and flowering plants to encroach on grasslands in African national parks, according to a new University of Utah study, published September 12 in Scientific Reports. The study used isotopes in hippopotamus teeth to find a shift in the diet of hippos over the course of a decade in Uganda’s Queen Elizabeth National Park following widespread elephant poaching in the 1970s.

Study first author and U postdoctoral scholar Kendra Chritz says that her method of using hippo enamel isotopes could help scientists reconstruct past changes in vegetation in Africa’s national parks, areas with relatively little ongoing scientific observation. The results could give ecologists an idea of what could happen to Africa’s grasslands if elephants, whose populations are steeply declining, went extinct or reached near-extinction.

“We have a window into what these environments could look like without megaherbivores, and it’s kind of grim,” Chritz says. 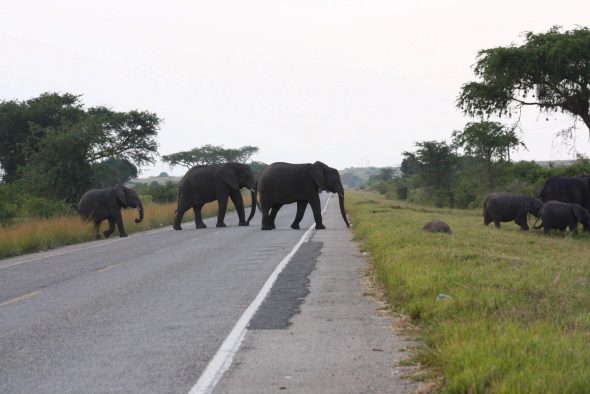 Grasslands are an important ecosystem in Africa, hosting many animals and serving as corridors for wildlife movement. Lowland tropical grasses, such as those in elephant ecosystems, are part of the C4 class of plants, a reference to the enzyme used to process carbon dioxide into sugars during photosynthesis. Corn and sugarcane are also C4 plants. C3 plants, which use a different enzyme, include trees, shrubs, flowering plants and herbs.

C3 plants compete for resources with C4 grasses in African savannas, including sunlight. Elephants and other megaherbivores help keep woody plant encroachment in check by browsing seasonally on shrubs and trees. But without that herbivore control, C3 plants can advance on grasslands unimpeded.

The presence of shrubs and trees, which can be seen in aerial photographs, give only a partial picture of the balance of power between C3 and C4 plants. Observing herbs and flowering plants requires ground-level observation, and records of such observations in Uganda’s Queen Elizabeth National Park, and many national parks in Africa, is sparse.

The two plant groups’ metabolic processes treat isotopes of carbon differently, so that C4 plants have a higher proportion of heavy carbon isotopes than C3 plants. As animals, such as hippos, eat plants, and the isotopic signatures of the plants in their diet are incorporated into the animals’ bodies and preserved in durable tissue, such as teeth. The hippos of Queen Elizabeth National Park, Chritz found, had been indirectly “observing” the plant makeup of the grasslands all along.

Queen Elizabeth National Park sits on the border between Uganda and the Democratic Republic of the Congo, and covers the channel that connects two lakes. In 1971, Idi Amin became president of Uganda, and management of the national parks essentially ceased. The Ugandan military killed thousands of elephants between 1971 and the mid-1980s, both to sell ivory to fund the regime and as food. Aggressive poaching continued after Amin’s ouster, and by the mid-80s the park’s elephant population had dropped from more than four thousand down to around 150. Around 4,000 hippos were poached as well.

Studies showed increased areas of woody plants in the park once management resumed in the 1990s. Because the change happened over a span of a few decades, Queen Elizabeth National Park was an ideal ecosystem in which to test whether herbivore teeth could represent the shift from C4 to C3 plants. 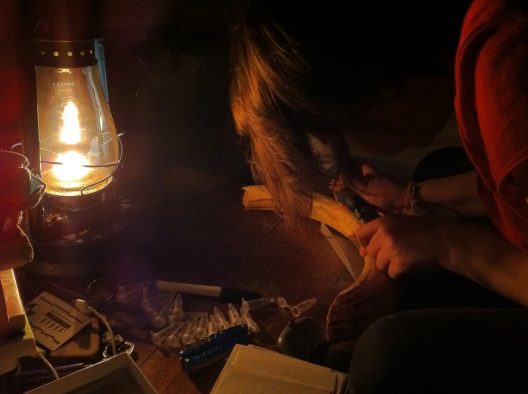 Getting and testing the teeth

Hippo teeth are not easy to come by, Chritz says. The teeth haven’t been used before for isotope analysis due to the difficulty of obtaining samples from a wide range of time periods. One of Chritz’s co-authors, Hans Klingel of Universitaet Braunschweig in Germany, conducted important research on the behavior of hippos in Queen Elizabeth National Park in the 1980s and 90s. He contributed teeth from the 1960s, pre-poaching, and from 2000. Chritz and her colleagues sampled enamel every centimeter along the length of each tooth, using known growth rates to correlate sections of the tooth to different years. All of these samples taken together recorded diet history from approximately the last decade of the animal’s life. But analysis showed that the two teeth displayed very different isotopic signatures. Chritz needed a third sample, in between the two time periods.

While in Uganda in 2013, Chritz approached the current game warden about obtaining another hippo tooth. The warden showed her a skeleton on display at a park museum from a hippo that died in 1991 – perfectly within the time range Chritz had aimed for. (Hear more about the retrieval of the tooth and about sampling it in adverse conditions in the sound file below).

Results showed that the 1960s hippo ate approximately 80 percent C4 plants, and that the percentage of C4 in the later hippos’ diets had dropped to around 65 percent. This showed that, within a time scale of only a few decades, C3 plant encroachment had progressed enough to significantly impact the diets of the animals in the park. The results also showed the validity of Chritz’s method and reconstructed the progression of vegetation changes since the 1960s.

Another surprise in the results was the proportion of C3 plants in the later hippos’ diets. Initial studies of hippo diets surmised that hippos only ate grass. “And few researchers have suggested otherwise,” Chritz says. “It appears that they’re actually quite flexible in their diets and adaptable to environmental change.” 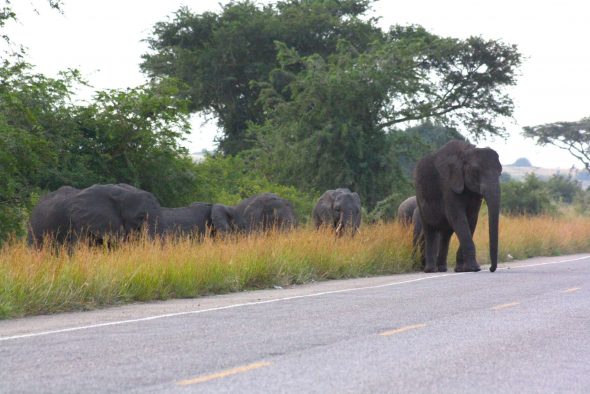 The clear implication from Chritz’s work is that the loss of elephants and other megaherbivores can lead to rapid environmental and ecological change. “We’ve built a record that shows just how drastic the loss of megaherbivores in a park can be on a very short timescale,” she says. “Within ten years, we see a big change in what’s happening in this once diverse grassy area of the park. This is a window into the future of what could to happen in East African savannas as elephants continue to be poached at the currently unprecedented rate.”

Chritz is hopeful that restoring elephant populations could reverse the changes and cause the grasslands to re-emerge. “But when you have too many elephants, they can also decimate forests by over-browsing,” she says. “There’s a balance you have to reach. The most important thing right now is to work hard at fighting poaching.”

People can combat poaching by reducing the demand and financial incentive for harvesting the elephants’ tusks, Chritz says. “Not purchasing ivory and knowing which products you might use that are made from ivory is the best thing you can do to protect elephants.”