University of Utah engineers create brighter, full-color holograms that can be viewed with low light 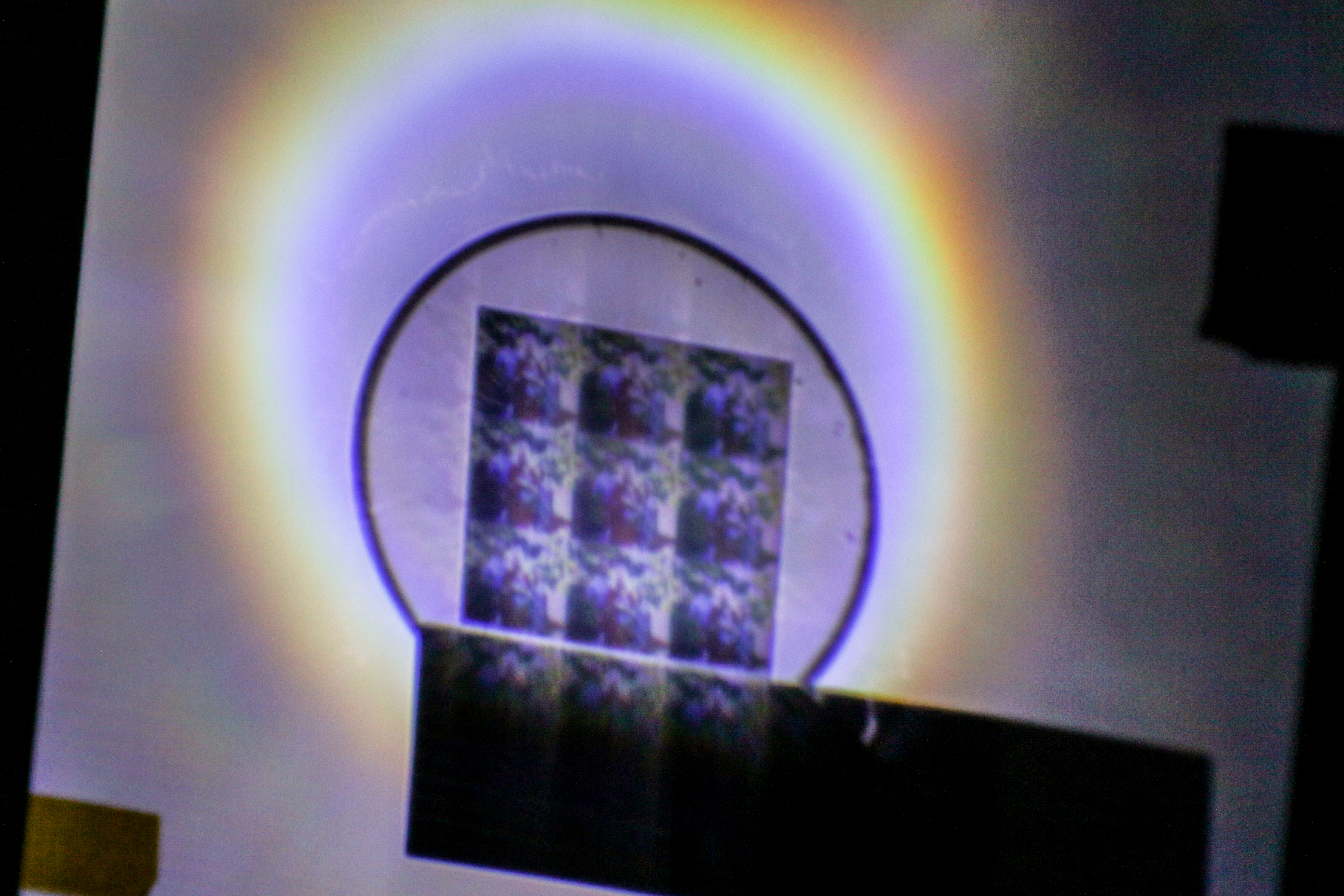 July 19, 2017 — Technology developed by a team of University of Utah electrical and computer engineers could make the holographic chess game R2-D2 and Chewbacca played in “Star Wars” a reality. 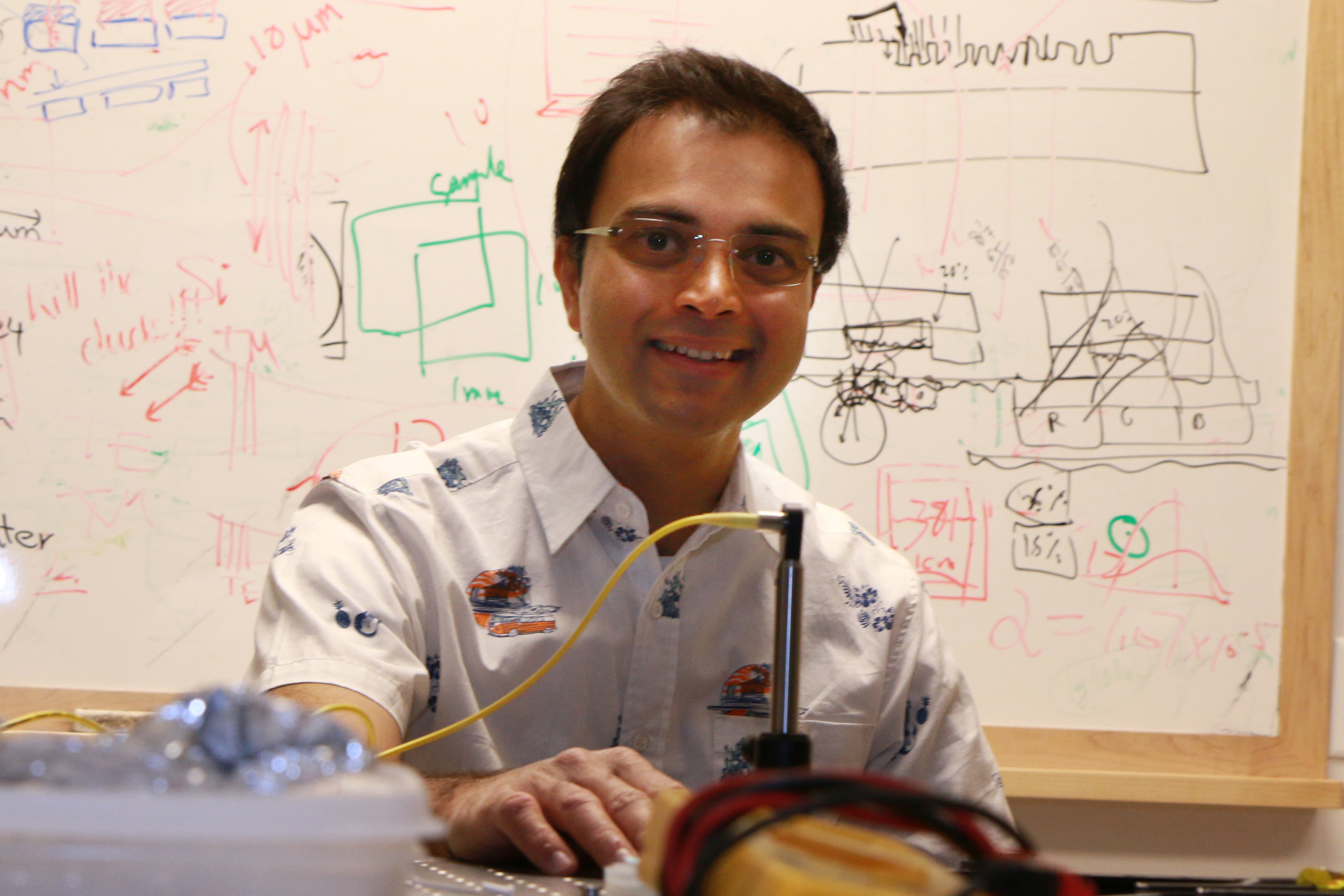 University of Utah electrical and computer engineering associate professor Rajesh Menon. Menon leads a team of engineers who have discovered a way to create inexpensive full-color 2-D and 3-D holograms that are far more realistic, brighter and can be viewed at wider angles than current holograms.

The team led by electrical and computer engineering associate professor Rajesh Menon has discovered a way to create inexpensive full-color 2-D and 3-D holograms that are far more realistic, brighter and can be viewed at wider angles than current holograms. The applications for this technology could be wide-ranging, from currency and identification badges to amusement rides and advertisements.

“You can have rich colors at high efficiency, with high brightness and at low cost. And you don’t need fancy lasers and complicated optics,” Menon says.

University of Utah electrical and computer engineering associate professor Rajesh Menon shows off a new 2D hologram that can be displayed with just a flashlight. His team has discovered a way to create inexpensive full-color 2-D and 3-D holograms that are far more realistic, brighter and can be viewed at wider angles than current holograms.

Typically, the projection of any image, whether it is two or three dimensional, is inefficient because when white light shines on an object, we can only see the reflected color that bounces back to our eyes while the rest of the colors of the spectrum are absorbed. Therefore, there is a lot of wasted light. With a typical LCD projector, for example, you may only see as little as 5 percent of the total light at one time.

Menon and his team have discovered a better way that borrows from the same principle behind how wings of certain butterflies display their colors: Instead of reflecting only the colors you see while absorbing the rest, all of the white light is redirected so you see the wavelengths of the wing’s colors at different locations. None of the light is absorbed and therefore wasted.

Using sophisticated algorithms and a new fabrication method, the engineers can create holograms that do the same thing — redirect colors to appropriate locations — instead of absorbing most of it to project much brighter photographic images either in 2-D or 3-D and with full, natural colors. Currently, full-color holograms require lasers to not only make them, but also to view them. Menon’s holograms can be viewed with regular white light. Most importantly, these holograms can be viewed from any angle, and the image detail does not change, much like a real object.

“Projecting an image before was very inefficient, and you need a massive lamp,” Menon says. “Here, you can just do it with just a piece of plastic and a flashlight. It’s much simpler and more efficient this way.”

Such technology could be used on currency notes with security holograms that produce more lifelike images. Currently, the holograms on some foreign currency or on credit cards look like shimmering monochromatic images, but Menon’s holograms would be more like full-color photographs. It also could be used for identification badges, driver’s licenses and security documents like passports in which an officer could use just a flashlight to authenticate it instead of a special light such as an infrared scanner. And these holograms could be inexpensive to manufacture because they can stamp out each sticker like a compact disc or DVD.

While Menon and his team have only produced 2-D still images with their technology so far, he said it wouldn’t be difficult to take the next step to create full-color 3-D moving images similar to the holographic chess pieces in “Star Wars.” Therefore, the holograms could be utilized in entertainment, such as for virtual reality headsets, for movie theaters that wouldn’t require powerful projector lamps (and it could be an avenue for glasses-less 3-D movies) or for amusement rides that use high-tech special effects.

“Imagine going through a ride and you want a monster to jump out. This is a way to do that with much richer color, with higher efficiency and in a much more ubiquitous manner because it’s so cheap,” Menon says.

The technology can also be used to produce holographic photos or video for advertising for platforms like billboards or kiosks. Moving 3-D video could be possible in as little as two years, and his team is working toward that now, he said.

Menon launched a company called PointSpectrum that is researching this new technology and to commercialize its potential uses.