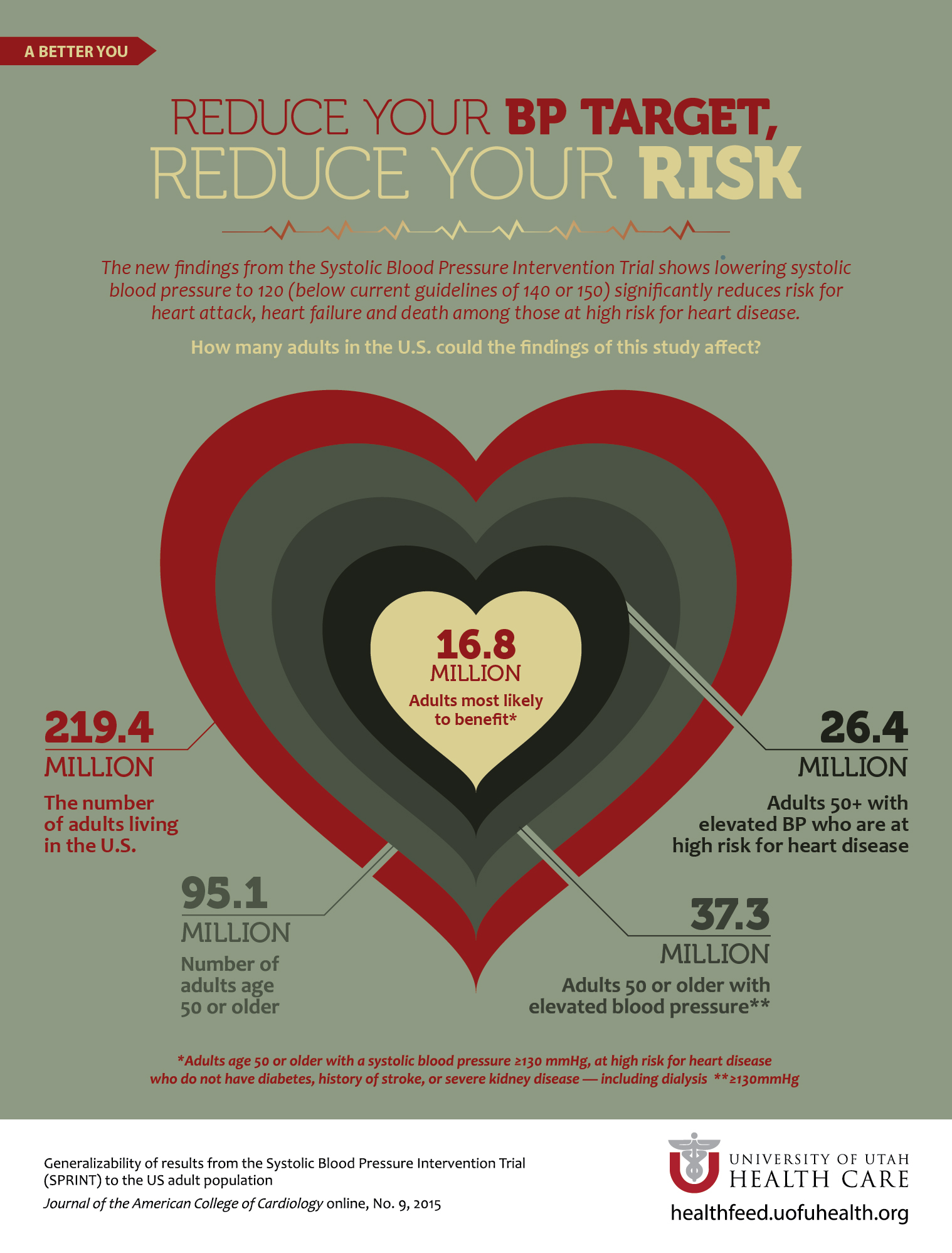 SALT LAKE CITY – A new study finds that at least 16.8 million Americans could potentially benefit from lowering their systolic blood pressure (SBP) to 120 mmHg, much lower than current guidelines of 140 or 150 mmHg. The collaborative investigation between the University of Utah, University of Alabama at Birmingham, and Columbia University, will be published Nov. 9 online in the Journal of the American College of Cardiology (JACC).

The scientists calculated the potential impact of preliminary results from the Systolic Blood Pressure Intervention Trial (SPRINT) that will be presented in full at the American Heart Association meeting and published online in the New England Journal of Medicine, also on Nov. 9. The initial analysis of SPRINT, reported in September, 2015, showed that using antihypertensive medications to reach a lower SBP target of 120 mmHg could greatly reduce risk for heart failure, heart attack, and death, compared to a target of 140 mmHg (SBP is the top number in a blood pressure reading). It’s estimated that one in three U.S. adults have high blood pressure, or hypertension, a significant health concern.

“SPRINT could have broad implications,” says lead author Adam Bress, Pharm.D., M.S., assistant professor of pharmacotherapy at the University of Utah College of Pharmacy. “Millions of Americans whose blood pressure is under control according to current guidelines may be considered uncontrolled if new guidelines adopt the intensive target of less than 120 mmHg studied in SPRINT.”

While new medical guidelines for treating hypertension could be months to years away, this research finds that more than 16.8 million Americans, 7.6 percent of the population, could be recommended for intensive blood pressure management if guidelines incorporate a new, lower, SBP target based on SPRINT results. The number represents Americans who meet the same criteria as SPRINT participants: they are age 50 or older, have an SBP between 130-180 mmHg, are at high risk for cardiovascular disease, and do not have diabetes or a history of stroke, among other inclusion and exclusion criteria.

The current study also reports that new guidelines may affect some segments of the population more than others. Compared to Caucasians, African Americans and Hispanics were less likely to meet SPRINT eligibility criteria (9 percent vs. 4.8 percent, 4.3 percent). The differences are largely due to the fact that these minority populations have a higher prevalence of diabetes and other health conditions that could preclude them from being SPRINT eligible. Men were also more likely to be eligible for SPRINT than women (8.8 percent vs. 6.5 percent), in part because unlike men, women tend not to show increased risk for cardiovascular disease until they are over 65.

However in practice, it’s common for physicians to prescribe treatments to patients who may have not been eligible for a clinical trial that demonstrated the efficacy and safety of a particular treatment. For example, some physicians may deviate from SPRINT eligibility by aggressively treating the blood pressure of any adult over 50, even if they do not have a high risk of cardiovascular disease. “Physicians are going to need to decide how far outside the SPRINT inclusion criteria to go,” says co-author Rachel Hess, M.D., M.S., also a professor of internal medicine and population health sciences at the University of Utah School of Medicine. “It’s going to be a tough decision.”

The numbers of Americans meeting each sequential SPRINT eligibility requirement are:

Potential impacts of SPRINT results on the U.S. population were based on analyzing data from the 16,260 participants in the National Health and Nutrition Examination Survey (NHANES) between 2007 – 2012 who met certain SPRINT inclusion and exclusion criteria. NHANES includes a representative cross-section of the American population, allowing for projection of these findings to the overall population. Most, but not all, SPRINT inclusion and exclusion criteria were accounted for in NHANES. For example information on subclinical cardiovascular disease and a history of medical non-adherence are not represented in the national survey.