Savannah monitor lizards have a unique airflow pattern that is a hybrid of bird and mammal flow patterns, U biologists discover

Take a deep breath in. Slowly let it out.

You have just participated in one of the most profound evolutionary revolutions on Earth—breathing air on land. It’s unclear how the first vertebrates thrived after crawling out of the sea nearly 400 million years ago, but the lungs hold an important clue.

Birds, reptiles, mammals and amphibians have evolved diverse lung structures through which air flows in complicated ways. Birds and mammals are on extreme ends of the airflow spectrum. Mammals inhale oxygen-rich air that funnels into smaller branches, ending in tiny sacs where oxygen enters and carbon dioxide leaves the bloodstream. When mammals exhale, the depleted air follows the same route out of the body, exhibiting a so-called tidal flow pattern.

In contrast, bird breath travels tidally through part of the respiratory system, but in a one-way loop throughout most of the lung. Thanks to a unique design with aerodynamic valves, air always moves toward the head through many tiny tubes in birds—during both inhalation and exhalation. Scientists thought this pattern of flow is hyper efficient and evolved to support flight until University of Utah biologist Colleen Farmer’s research group discovered that alligators and iguanas also have a unidirectional air flow pattern.

In their latest study, U biologists have discovered that Savannah monitor lizards have lung structures that are a kind of a hybrid system of bird and mammal lungs. The researchers took CT scans of the entire lung labyrinth and used two different supercomputers to simulate airflow patterns at the highest resolution. The software used computational fluid dynamics similar to those used to forecast weather, calculating millions of equations every tenth of a second. The findings show that vertebrate lung evolution is complicated and we have yet to understand the full picture.

“We don’t know why animals have different types of lung air flow,” said lead author Robert Cieri, a postdoc at the University of the Sunshine Coast who did the research while a graduate student in Farmer’s lab. “Why do humans have the lungs we have verses the lungs of a bird? That’s not a simple question. By answering that, maybe we can find out more about our own history.” 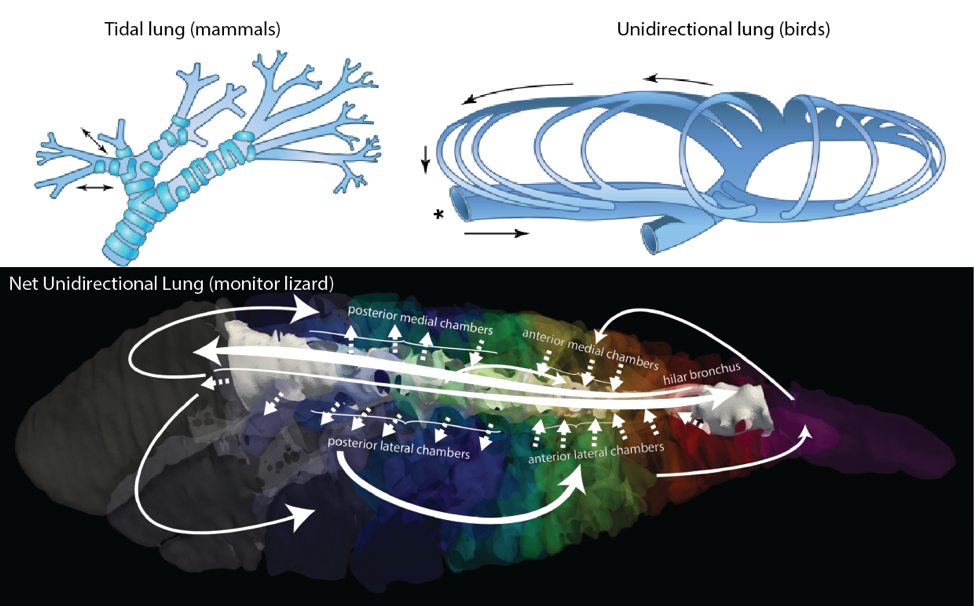 Different types of airflow patterns in animal lungs. Mammals (top left) have a tidal airflow pattern where air moves to-and-fro through a branching network of bronchi. Birds (top right) have looping bronchi and air moves in the same direction during both inspiration and expiration through many of these bronchi. Monitor lizards (below) have a net-unidirectional airflow pattern where air moves to-and-fro, but more air moves forward or backward over the whole ventilatory cycle in each parts of the lung. White arrows show net flow over the whole ventilatory cycle.

The paper published on Dec. 13 in The Anatomical Record.

The Savannah monitor lizard has long fascinated scientists. They have one of the most complicated lung systems of any reptile. In 2014, Cieri and colleagues analyzed one section of the lung that had primarily one-way airflow. This new study uses more powerful techniques to paint a completer and more complicated picture. Savannah monitor lizard lungs are structured around a long branchial tube that runs through to the back of the lung and opens into a big sac. Many smaller tubes branch off from the main one and distribute air into tiny chambers. These chambers have holes in their walls, allowing air to flow also from chamber to chamber. This complicated layout results in an airflow pattern that changes over the course of a breath cycle. It’s a unique pattern that is part bird, part mammal.

When the animal exhales, nearly all of the air flows towards the front of the lung and out of the trachea in a net unidirectional flow. At the beginning of inhalation, air enters through the trachea and flows towards the back of the lung. As the inhale continues, the air begins to distribute throughout the different side chambers and starts to loop back around towards the front of the lung. As these loops become more dominant, the late stages of inhalation look similar to exhalation because most of the air is flowing unilaterally back from the central chamber. The complicated structure has no flaps or valves that determine airflow, like the heart pumps blood. Pure aerodynamics guide the complicated physics.

“This study is important in demonstrating it is possible to numerically analyze patterns of airflow in these extremely complicated lungs. This quantitative ability opens up new avenues to study the basic mechanisms of how aerodynamic valve work, and gives us better tools to piece together the evolutionary history of these patterns of flow and the structures that underpin them,” said Farmer, senior author of the study. 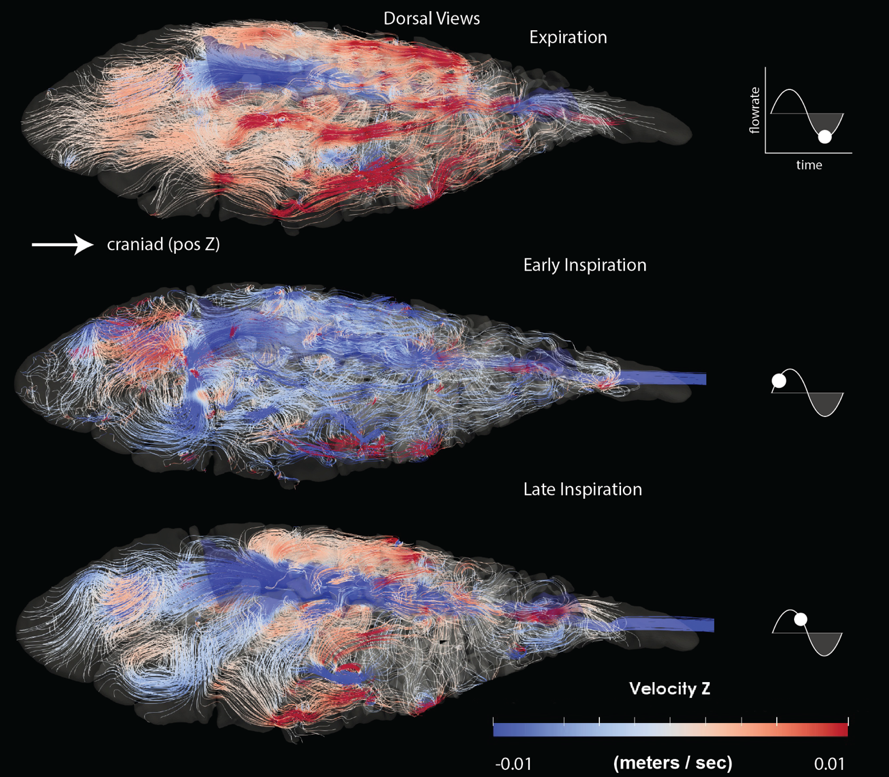 The physics is so complicated that Cieri needed two supercomputers from the Center for High Performance Computing at the U and the National Science Foundation Blue Waters to run the computer fluid dynamics simulation. After creating the CT scans, he modified existing software to predict the velocity and pressure based on the lung structure. He divided the structures into millions of tiny “boxes.” Each box has the physical parameters of that section of the lung. The simulation uses equations to predict what the pressure and velocity will be in the next box, and so on.

“There are millions of these elements. Each one is influencing another one every ten-thousandth of a second in every direction. That’s why we needed the computer power—the simulation is brute force balancing two equations at each step to figure out the next piece,” said Cieri.

The evolution of lungs is one crucial clue to understanding the pressures that led to where we are now. Along with learning more about lung evolution, Cieri believes we can learn something from the physics of the structure.

“We have this amazing wealth of really cool fluid dynamics out there in the animal world that we want to know more about. Maybe we can apply that knowledge to engineering or for human health,” he said.

Interact with the 3D figures in virtual reality here: https://sketchfab.com/bob.cieri

Robert Cieripostdoctoral researcher at the University of the Sunshine Coast, Australia
bob.cieri@gmail.com