Migratory bears down in the dumps

University of Utah biologists working in Turkey discovered two surprising facts about a group of 16 brown bears: First, six of the bears seasonally migrated between feeding and breeding sites, the first known brown bears to do so. Second, and more sobering, the other 10 bears stayed in one spot all year long: the city dump.

The behavioral split between the two bear groups shows how dramatically the availability of food, particularly human-related food sources, can change bears’ lifestyles. Understanding the difference in behaviors is key to designing conservation strategies among increasing human-caused fragmentation of the bears’ habitats. 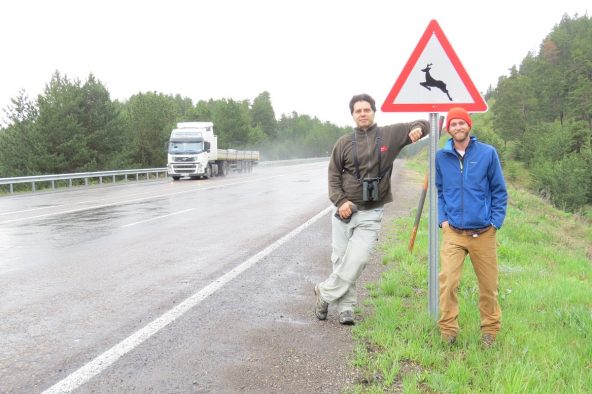 Cağan Şekercioğlu (left) and Mark Chynoweth at a wildlife crossing sign along the Kars-Erzurum highway that bisects Sarıkamış Forest.

“Bears are an incredible species that can adapt to many different environments,” says graduate student Mark Chynoweth, a member of the research team along with U biologist Çağan Şekercioğlu and colleagues from Switzerland, Croatia and Turkey. Their work is published today in the Journal of Zoology, with co-authors Gabriele Cozzi and Arpat Ozgul from Zurich University, Josip Kusak from University of Zagreb, and Emrah Çoban and Ayşegül Çoban from Kafkas University. 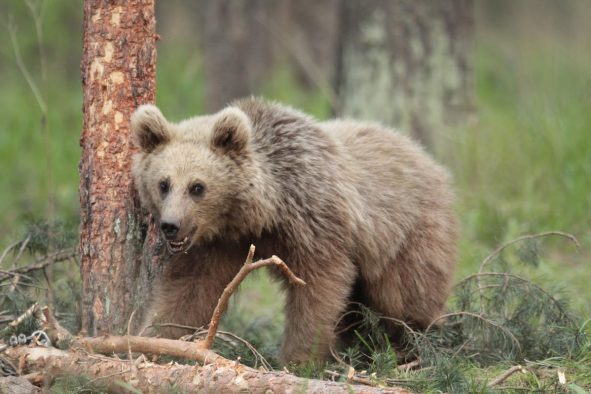 Today’s visitors to U.S. national parks, especially Yellowstone and Yosemite, are confronted with the consequences of past visitors allowing bears to get too close to human establishments. Feeding the bears used to be a commonplace highlight of a Yellowstone visit. Up until World War II, the park even erected bleachers near park dumpsters so visitors could watch the bears come eat every night. Now, visitors are instructed to not even leave empty coolers in cars, because bears have learned to associate the boxy plastic coolers with a quick snack – and may tear the door off to get to it. Yogi Bear’s running gag about stealing picnic baskets has now become a major wildlife management problem.

In northeast Turkey, the problem is much the same. Brown bears from nearby forests feast in the Sarıkamış city dump at night. Because dump-feeding is hardly a natural behavior for bears, Şekercioğlu, Chynoweth and colleagues set out to learn just how much the dump had affected local bear behavior. 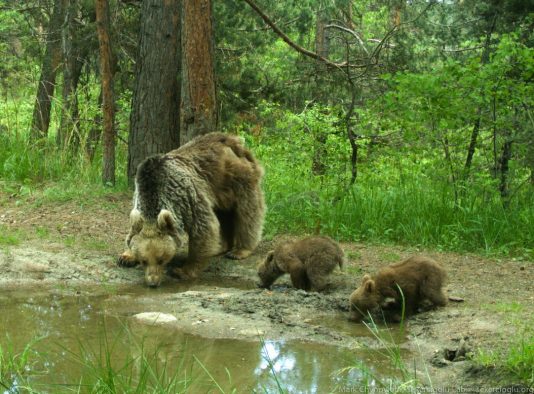 A mother bear and her two cubs stop for a drink in Sarıkamış Forest, eastern Turkey

Şekercioğlu had first visited northeastern Turkey in 2001 to study butterflies. The region connects two of the 35 global biodiversity hotspots, the Caucasus and the Iran-Anatolia hotspots. After hearing about populations of wolves and brown bears in the area, Şekercioğlu started studying wildlife with camera traps in 2006 and started tagging bears with satellite tracking collars in 2012. He and his colleagues tagged a total of 16 bears in and around the small town of Sarıkamış, adjacent to Sarıkamış Forest Allahuekber Mountains National Park (SAMNP) and started watching where they went. GPS receivers recorded the location of the bears every hour. Tagging the bears, Şekercioğlu says, “was a great thrill.” and became the subject of Turkey’s first National Geographic wildlife documentary, “Sarıkamış: Tracking the Brown Bear.” 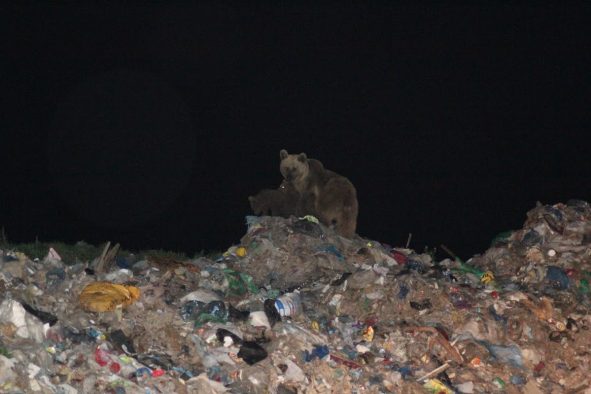 A mother bear with her three cubs at the Sarıkamış garbage dump in eastern Turkey.

The tracking data from the bears showed two very distinct foraging behaviors. Six bears, dubbed “wild” bears, made regular seasonal migratory trips of more than 100 km (62 miles) and up to 250 km (155 miles) round trip from a dry, overgrazed pine forest to a rich, wet oak forest, stocking up on food before hibernation.

“Brown bears are known to travel long distances in search of food,” Chynoweth says. But the behavior he observed was more than just a long-range hunt for dinner. The repeated seasonal trips between hibernation and feeding grounds could be considered migration. “Other bear species do migrate, most notably polar bears,” Chynoweth says. But no one had ever seen migration in brown bears before.

In an undisturbed ecosystem, brown bears have no need to migrate, Chynoweth says. All of the food they need can usually be found near their hibernation and breeding grounds. But the bears of Sarıkamış Forest live in a Scots pine forest with few nuts or fruits in the understory, and may have established migratory patterns to find food outside of their normal hibernation area.

“Despite their large size and slow looks, bears can also cover a lot of distances at a steady, tank-like pace across all sorts of terrain and back in search of food resources,” Şekercioğlu says.

The other 10 bears didn’t migrate at all, though. They stayed all year-round near the most reliable source of food they could find: The Sarıkamış city dump. The dump bears’ “residential” lifestyle further highlights the bears’ ability to adapt their behavior to food sources, though the researchers fear that closing the dump may not return the bears to their previous wild ways.

Closing the dump, the researchers write, could result in one of three scenarios. The first sees the bears dying of malnutrition, an unlikely outcome given bears’ knack for finding food. The second, and most likely possibility, is that the dump bears, who are already habituated to humans, venture farther into Sarıkamış to forage and inevitably come into contact and conflict with humans.

A third possibility sees the dump bears returning to their regular migrations. In 2008, long before bear tracking began, Şekercioğlu had proposed Turkey’s first wildlife corridor, a reforestation effort to connect areas of fragmented forest and provide habitat and cover for migrating animals. The slow reforestation process began in 2013. To Şekercioğlu’s delight, the wild bears’ migratory path coincides with the previously proposed corridor route. 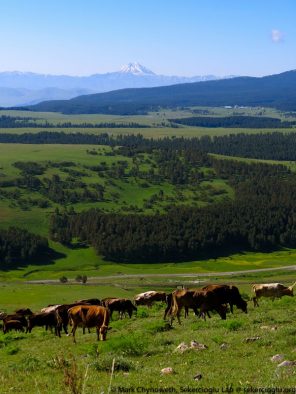 Sarıkamış Forest is a fragmented forest dominated by human activity including livestock grazing and timber extraction.

“The borders of a national park or other protected area do not ‘contain’ wildlife,” Chynoweth says. The protected SAMNP covers only 225 km2 (87 miles2) while the ranges of some brown bears’ the authors tracked extended over 1600 km2 (618 miles2). Human disturbances outside protected areas, such as garbage dumps, can still influence wildlife.

Still, an understanding of bear behavior can lead to expansion and connection of protected areas, such as the wildlife corridor, that are tailored for animals’ maximum benefit.

“We hope that this corridor, by providing more forest and increasing forest connectivity, will encourage more bears to move/migrate to the wet Black Sea/Caucasus forests,” Şekercioğlu says, but adds: “It is pretty hard for garbage bears to give up garbage.” 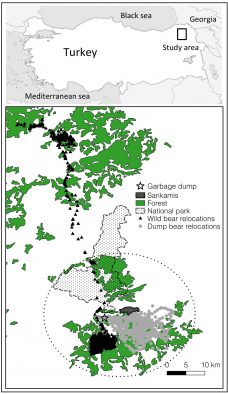 The study area in north-eastern Turkey. The dotted ellipse represents the core study area including Sarıkamış Forest and surrounding pastures.