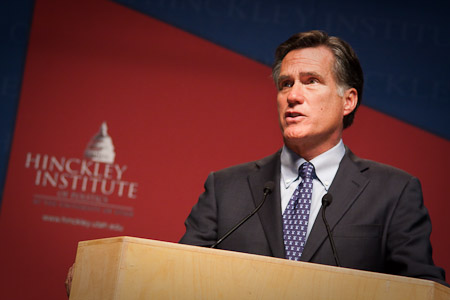 Former governor of Massachusetts Mitt Romney will address students at a March 3 forum sponsored by the Hinckley Institute of Politics on the state of the 2016 presidential race.

The forum will be held at 9:30 a.m. in the Edgar J. Thompson Music Hall at the David Gardner Hall Building, 1375 Presidents Circle.

The event is part of the Hinckley Institute’s well-known series of political forums, designed to foster discussion and critical thinking about political issues of the day.

Romney, a two-time presidential candidate and businessman, will provide U students with a unique learning opportunity during a particularly interesting election season, said Jason Perry, director of the Hinckley Institute of Politics and vice president for government relations at the University of Utah.

“As the 2016 election year unfolds, our students are being offered an opportunity to hear from someone with a long history of public service and political experience,” said Perry.

Limited seating will be available at Gardner Hall, and students are advised to arrive early. Media will need to be credentialed to gain access to the event.

The campus community is advised that parking in the area may be scarce due to increased traffic around Presidents Circle around the time of the event. Use of public transportation is encouraged.

About The Hinckley Institute of Politics

The Hinckley Institute of Politics was established in 1965 through donations from the Noble Foundation and Robert H. Hinckley. The institute observed its 50th anniversary last May and hosted a record-setting 116 political forums last year, including well-known names such as broadcaster Ted Koppel and author Michael Lewis. The institute has become known around the world for its unique programs and scholarships, including an international internship program that operates in 58 countries. Students who’ve participated in Hinckley programs are credited with helping the U to become one of the top-producing institutions of Truman Scholars in the nation.

The institute sponsors several signature events every year, including the Sam Rich Lecture Series, the Siciliano Forum Series, the Outstanding Professor Lecture Series, HIP Talks and the Wayne Owens Fund programming. The institute’s momentum will only continue forward in coming years, as construction on a new Orson Spencer Hall — which will result in a new home for the Hinckley Institute — gets underway later this year.