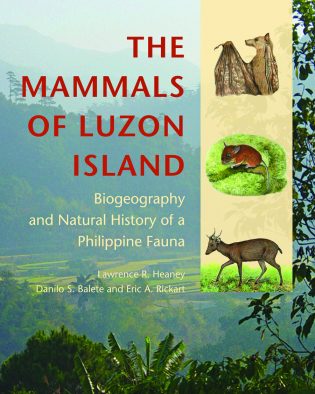 Cover art for The Mammals of Luzon Island.

Based on more than a century of accumulated data and 15 years of intensive field work, The Mammals of Luzon Island is part field guide and part general reference book for all those interested in the mammals of Luzon, the largest of the Philippine Islands and fifteenth largest island in the world. On Wednesday, April 27, the Natural History Museum of Utah will host a lecture and book signing with The Mammals of Luzon Island co-author and Museum vertebrate zoology curator Eric A. Rickart. Beginning at 7 p.m. in the Museum’s Swaner Forum, the event is free and open to the public.

Situated near mainland Southeast Asia, Luzon is home to approximately 44 million people who have greatly altered the island’s natural habitat, some of which has existed for more than 20 million years. As a result, Luzon boasts a native mammal fauna in which many species occur nowhere else. The island’s unique geography and biodiversity, therefore, lend the island as an ideal site for studying natural processes that shape the evolution of biological diversity and natural communities as well as the impacts of humans.

The Mammals of Luzon Island highlights work which resulted in the discovery of several species of native mammals, revealed fundamental patterns of geographic distribution across islands and along elevational gradients and demonstrated how species respond to disturbance and restoration of natural habitat. The book features 120 fully illustrated species profiles and artfully demonstrates how the island’s mammals fit together into larger questions regarding evolution, ecology and biogeography. The book also addresses conservation efforts in the Philippines.

Rickart, who has conducted research with the book’s first author Lawrence R. Heaney and second author Danilo S. Balete, on Luzon and other Philippine islands since the 1980s, has devoted over three decades to studying biological diversity across the globe.