Microbes are everywhere – on every surface, every object, every plant and animal. Yes, including on and inside you. True, some of them cause disease.

Wait – don’t reach for the hand sanitizer just yet. Many of them are co-residents in our bodies, providing beneficial services in exchange for some of our resources. It’s a relationship called mutualism in which we provide a comfortable home, and they return the favor in myriad, interesting ways. Science is just beginning to scratch the surface of what the microbes in our bodies do for us.

Until now, scientists have only had a murky understanding of how these relationships arise. Now Colin Dale and his colleagues at the University of Utah have an answer. It’s good news and bad news, germophobes: The bad news? Mutualistic bacteria start out by invading animal cells just like malevolent disease-causing bacteria do. The good news? Once they’re in, they calm down and play nice.

“When I first got into microbiology, it was all about the bad guys,” says Dale, a professor of biology. “Microbes had a bad rap. It’s important for us to see the other side of the equation and understand how these friendly relationships begin.”

Dale’s work is published May 10 in Cell Host & Microbe and was funded by the National Institutes of Health.

Sodalis in the wild

“We know a lot about symbiosis, but we don’t know how it starts,” Dale says. He and other researchers investigate the question of how insects find mutualistic bacterial partners and strike up a successful relationship. To do that, his lab performs comparative studies on the genetic characteristics of both the mutualistic symbiont and its “wild” progenitor. The comparison is important and instructive because symbionts, settled into their host home, lose genes they don’t need any more. “Without the comparison, you really can’t study this process, because you don’t know the genetic capabilities of the progenitor” Dale says.

Dale’s lab is lucky to have identified such a progenitor. In 1999, he published the first description of Sodalis, a genus of bacteria that are now known to have been adopted independently as mutualistic partners in a wide range of insect hosts. Later, in 2012, a colleague contacted him about a strange biological specimen he’d received, taken from an infection in a man who injured his hand while pruning a dead crab apple tree. The specimen turned out to be a species of Sodalis, the first one identified that lives, independent of an insect host, in the environment. Dale named it Sodalis praecaptivus, denoting that it represented Sodalis “pre-captivity.” With both symbionts and progenitor in hand, so to speak, Dale and his colleagues went to work to elucidate the genetic differences between the two.

A bunch of dead weevils

Genetic analysis is tedious work. Dale’s colleague, postdoctoral researcher Shinichiro Enomoto, spent three years creating hundreds of mutant strains of S. praecaptivus, lacking genes that might be important in allowing the bacteria to thrive in an insect host. The mutants were then injected into weevils to see how each genetic mutation affected the bacteria’s function.

The main aim was to identify the genes in the progenitor that allow it to resist the action of the insect’s immune system. One mutation, though, displayed an unexpected sinister behavior. The infected weevils would die within two weeks.

“They became immobile and dropped dead,” Dale says. “We’d never seen that before.” 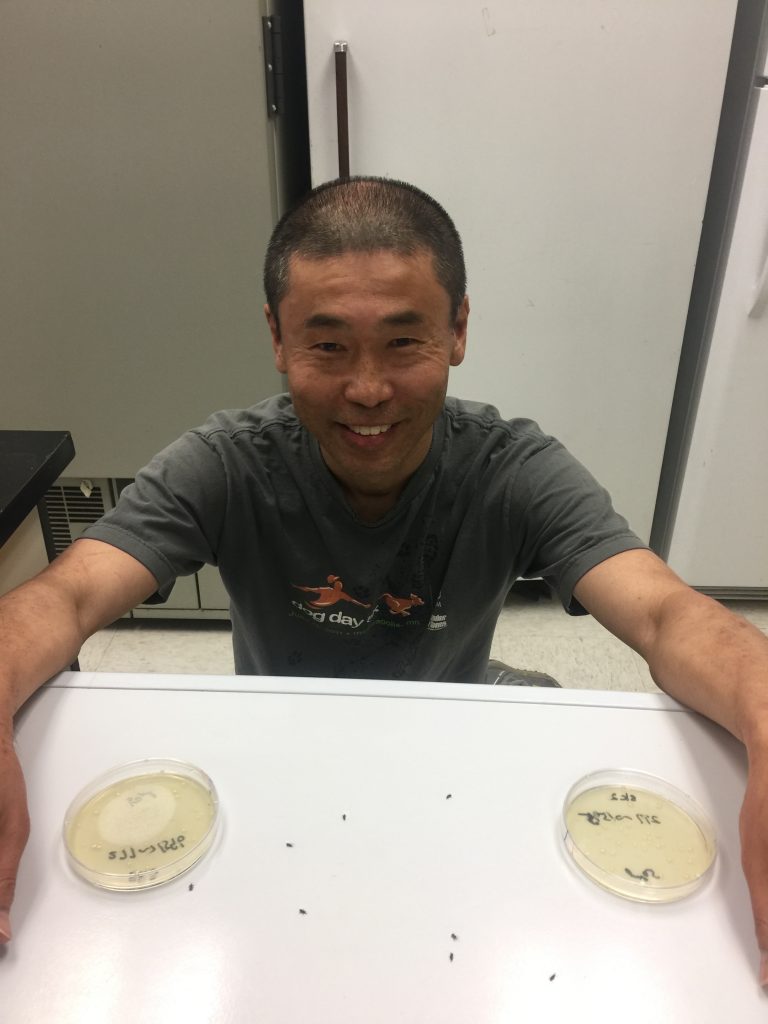 The mutation affected a regulatory system called “quorum sensing,” which allows bacteria to sense the size of their own population in the insect. In S. praecaptivus, the quorum sensing genes control genes that function in virulence, or the ability of bacteria to aggressively enter cells. Many disease-causing bacteria use virulence factors to invade and destroy cells, and they often use quorum sensing to activate these virulence factors when their population reaches a critical threshold to mount a devastating attack. S. praecaptivus, on the other hand, uses quorum sensing to ensure that virulence is only deployed at the onset of infection, to ensure successful establishment.

“It’s got this special genetic programming that allows it to get into cells using virulence and then shut that virulence down to maintain a benign or friendly association,” Dale says. 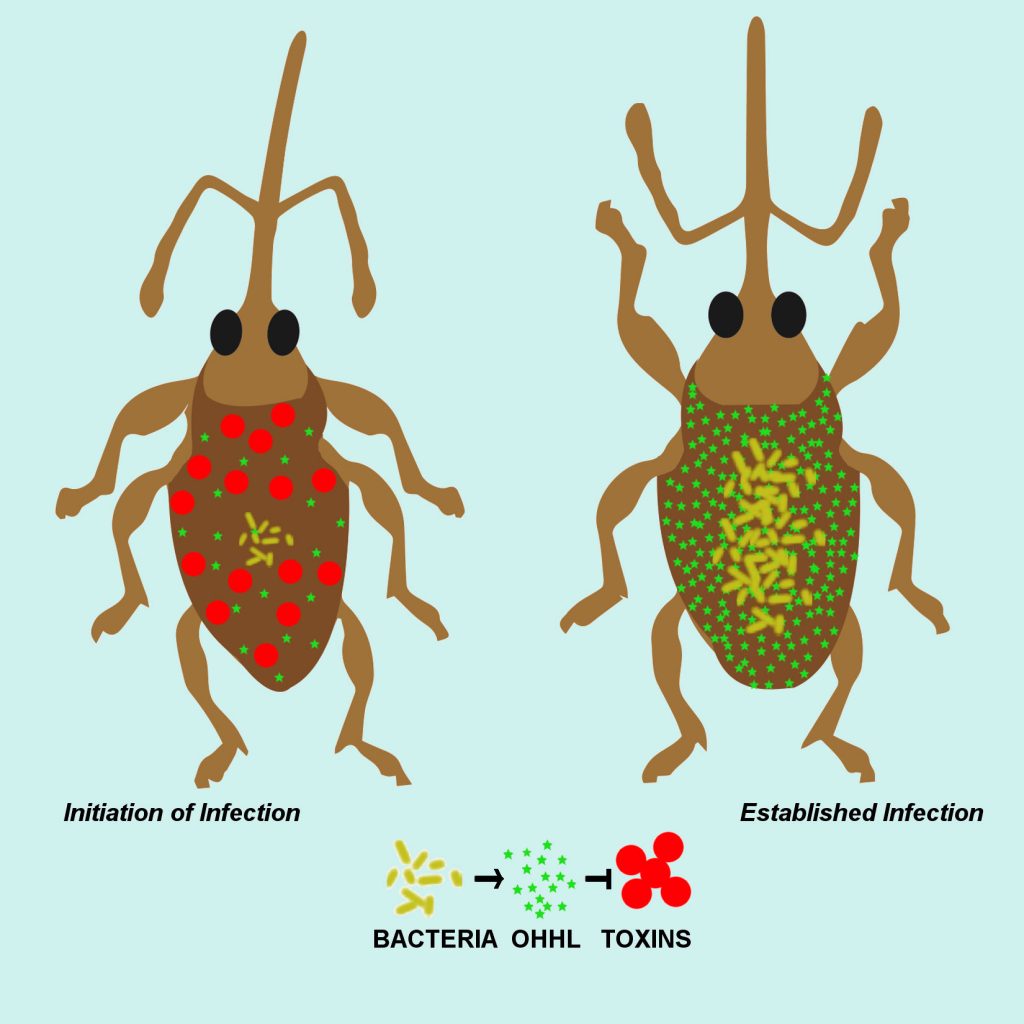 In the early stages of infection (left) bacteria employ virulence toxins to enter cells. By the time the infection is established, (right) enough of the quorum signaling molecule OHHL has been released by bacteria to communicate that a sufficient number of bacteria are present. The signal shuts down production of toxins.

Dale proposes that mutualistic relationships between insects and bacteria arise as a consequence of bacteria using insects as vectors (taxis) to travel between other plant and animal hosts that they infect in the environment. A passenger gets into a taxi because he or she wants a ride to a destination. The taxi provides the ride but the driver has to charge a fare, otherwise he/she can’t compete with other members of the population and will go extinct. To offset the cost of the ride, bacteria are expected to provide their insect “driver” with something beneficial.

“This provides the means to be mutualistic,” Dale says. “You’ve already found something that taxi driver wants, i.e. money. Then it’s easy to imagine how that switches to you never leaving the cab.” As long as the driver can keep you alive by supplying all necessary nutrients, he/she obtains a special benefit – never having to locate another passenger.

The final frontier is all around us

Dale notes that microbiology research has long focused on species that affect humans, animals and economically important crops. Recent advances in bacterial identification and sequencing have allowed for more and more environments, including our skin, mouths and guts, to give up the secrets of their microbial biodiversity. But Dale says there’s much more to be explored. “We’ve been through an obsession with the weird and wonderful, sampling volcanic springs, subterranean frozen lakes and nuclear reactors and now we’re obsessed with the microbiome and its role in human health.  However, there’s clearly much to learn, particularly in the realm of microbial ecology, from studying the microflora of seemingly mundane items like tree branches,” he says.

As for S. praecaptivus, although Dale’s lab has conducted exhaustive genetic work to identify the virulence genes causing weevil killing, he says it’s not exhaustive enough. “There are clearly novel genes that are currently unknown to science that contribute to the weevil killing, Dale says. “That’s both daunting,” he says, “and exciting.”