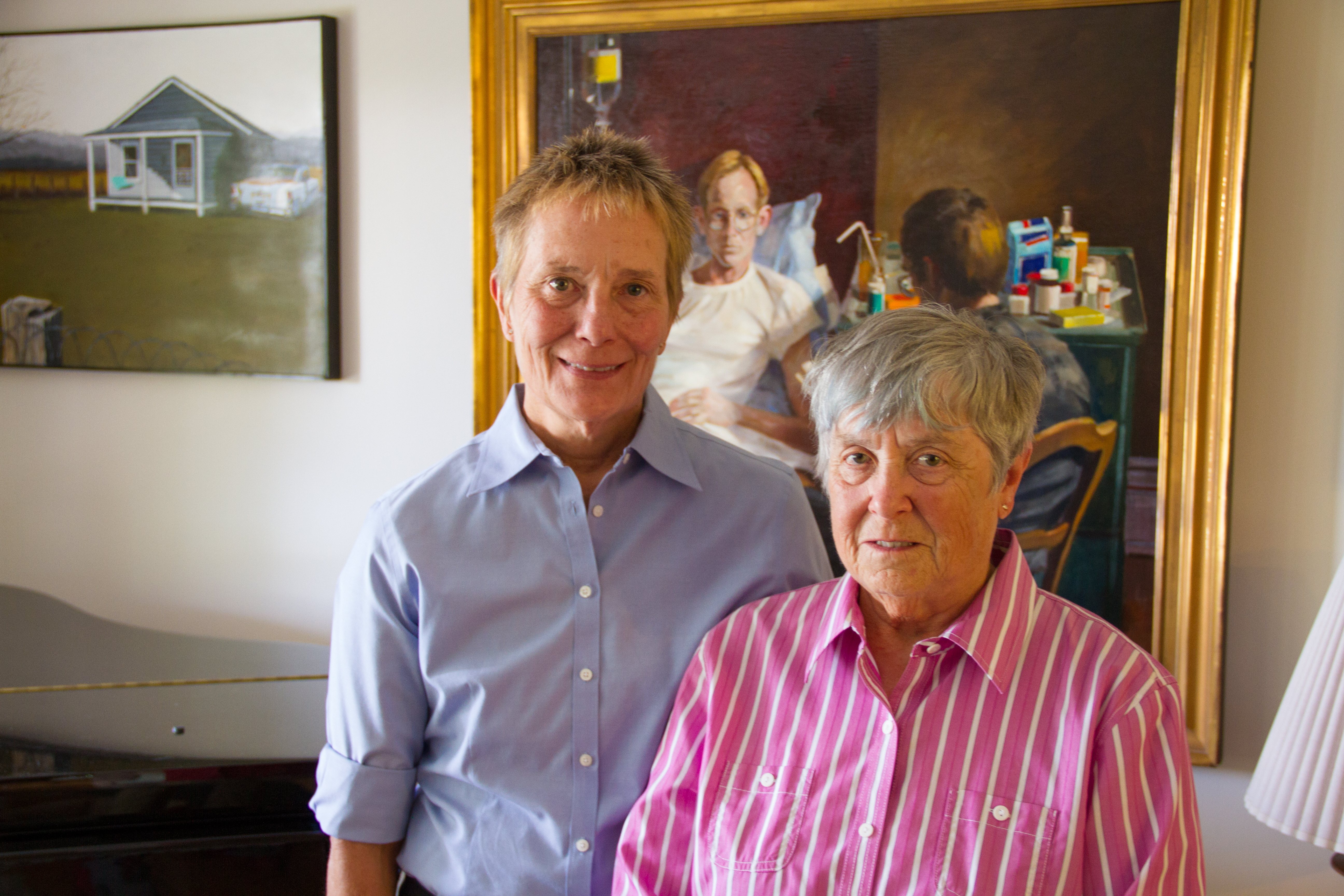 After the Utah State Legislature enacted a historic non-discrimination statute earlier this year, Sen. Jim Dabakis tearfully turned to University of Utah physician Kristen Ries with the signed document designed to ban discrimination in housing and employment for the state’s lesbian, gay, bisexual and transgender communities.

“(This is) for your work,” an emotional Dabakis told Ries, a retired U professor and HIV clinic director who became the first physician in the state to treat HIV patients —the virus that leads to AIDS —after the disease was identified in 1985.

“This brings tears to my eyes,” replied Ries, adding simply that it was “the right thing to do” to treat dying AIDS patients when other doctors cruelly turned sick patients away in an era where the mention of the disease sparked panic and misunderstanding.

The story of Ries and her partner, Maggie Snyder, is an important part of Utah history. In the 1980s when HIV first came on the scene, patients who contracted the virus had a life expectancy of one year. The couple often spent their weekends holding the hands of patients who died. They were the only option for help for hundreds of patients, whose stories Ries and Snyder have kept to this day in notebooks and scrapbooks.

The work of Ries and Snyder, who started as Ries’ physician assistant and later became her wife, is now the subject of a new project at the University of Utah that seeks to both preserve their pioneering medical work in oral histories and to honor them for their heroic contributions to the state.

During the first phase of the project, a professional historian is conducting a series of interviews with Ries and Sndyer to create an extended oral history of their work and lives. In addition, their extensive collection of documents will be digitized by archivists from the Marriott Library Department of Special Collections.

In the second phase of the project, historians will expand the scope of the oral histories and archives to include others involved in the struggle against HIV/AIDS in Utah, including medical professionals, patients and organizations such as the Utah AIDS Foundation. In addition, a professional historian will write a book on this chapter of Utah history. The project hopes to culminate with the establishment of a permanent collection at the Marriott Library named in honor of Ries and Snyder that will be available to all.

“Historians have studied HIV in liberal places like San Francisco and New York, but no work has been done on what happened in conservative places like Utah. But of course far more places in the U.S. In the 1980s looked like Salt Lake City, than like New York.  Understanding our story will go a long way towards exploring and explaining the national story,” said Elizabeth Clement, an associate professor of history at the University of Utah, and one of the project’s historians.

In addition to creating the historic library collection, the S.J. Quinney of Law will host a symposium on Friday, Oct. 2 titled “An interdisciplinary history of the struggle against HIV/AIDS.”  The symposium will be the kick-off event to the completion of the permanent collection.

The symposium will feature three renowned scholars from medicine, social history and law, who will speak on the historical arc of the disease. Keynote speakers include Paul Volberding, M.D., principal investigator and co-director of the University of California-San Francisco’s Gladstone Institute of Virology and Immunology Center for AIDS Research; Jennifer Brier, an associate professor at the University of Illinois-Chicago, who teaches a course on “AIDS, Politics and Culture;” and Brad Sears, executive director of the Williams Institute at the UCLA School of Law.

The symposium, organized by Terry Kogan, a professor at the S.J. Quinney College of Law, will feature tributes to Ries and Snyder from a variety of community members throughout the day.

“In the early 1980s, Dr. Ries and Ms. Snyder were the first medical professionals in Utah to deal with AIDS patients, an era when no other doctor in Utah would treat this population of largely gay men,” Kogan noted. “This critical piece of Utah history must be preserved.

“In 1994, Ries closed her private practice and joined University of Utah Health Care as a professor and director of the health system’s infectious diseases/HIV clinics. She has since retired, but remains on the faculty of the University of Utah School of Medicine and is active in national discussions related to HIV and AIDS.

Honoring Ries and Snyder through this ambitious and important project comes at a time when equality for the LGBT community has made historic strides. But continued attention to HIV and AIDS is also important from a public health perspective.

“When we came to the University of Utah in 1994, AIDS was an epidemic and people were truly afraid. There was so much discrimination against AIDS patients, and their need for treatment was so great, because we were the only ones in Utah treating them – so Maggie and I made house calls 24/7,” Ries recalled.  “We just worked on a shoestring, and there aren’t too many fools willing to do that. It was never my intent to become an activist. But I just knew I could protect myself against HIV/AIDS with the same protocols I would use for any other disease, so we forged on with knowledge and naivety. I care for the underserved because I believe everyone deserves reasonable care.”

Funding for the symposium has come in part from the Lee Teitelbaum Symposium Fund at the S.J. Quinney College of Law. Funding for the oral histories and archiving portion of the project has come from generous grants from the B.W. Bastian Foundation, the Jane and Tami Marquardt Peace & Possibility Project, the Weinholtz Family Foundation and the Community Foundation of Utah.

In addition to the event at the law school, the Marriott Library will host an event to launch the archive on Sept. 30 from 5 to 6:30 p.m. at the Gould auditorium.

Frontiers in Precision Medicine to explore changing landscape of biomedicine and law
December 1, 2015