A remarkable new fossilized skeleton of a tyrannosaur discovered in the Bureau of Land Management’s Grand Staircase-Escalante National Monument (GSENM) in southern Utah was airlifted by helicopter Sunday, Oct. 15, from a remote field site, and delivered to the Natural History Museum of Utah where it will be uncovered, prepared and studied. The fossil is approximately 76 million years old and is most likely an individual of the species Teratophoneus curriei, one of Utah’s ferocious tyrannosaurs that walked western North America between 66 and 90 million years ago during the Late Cretaceous Period. 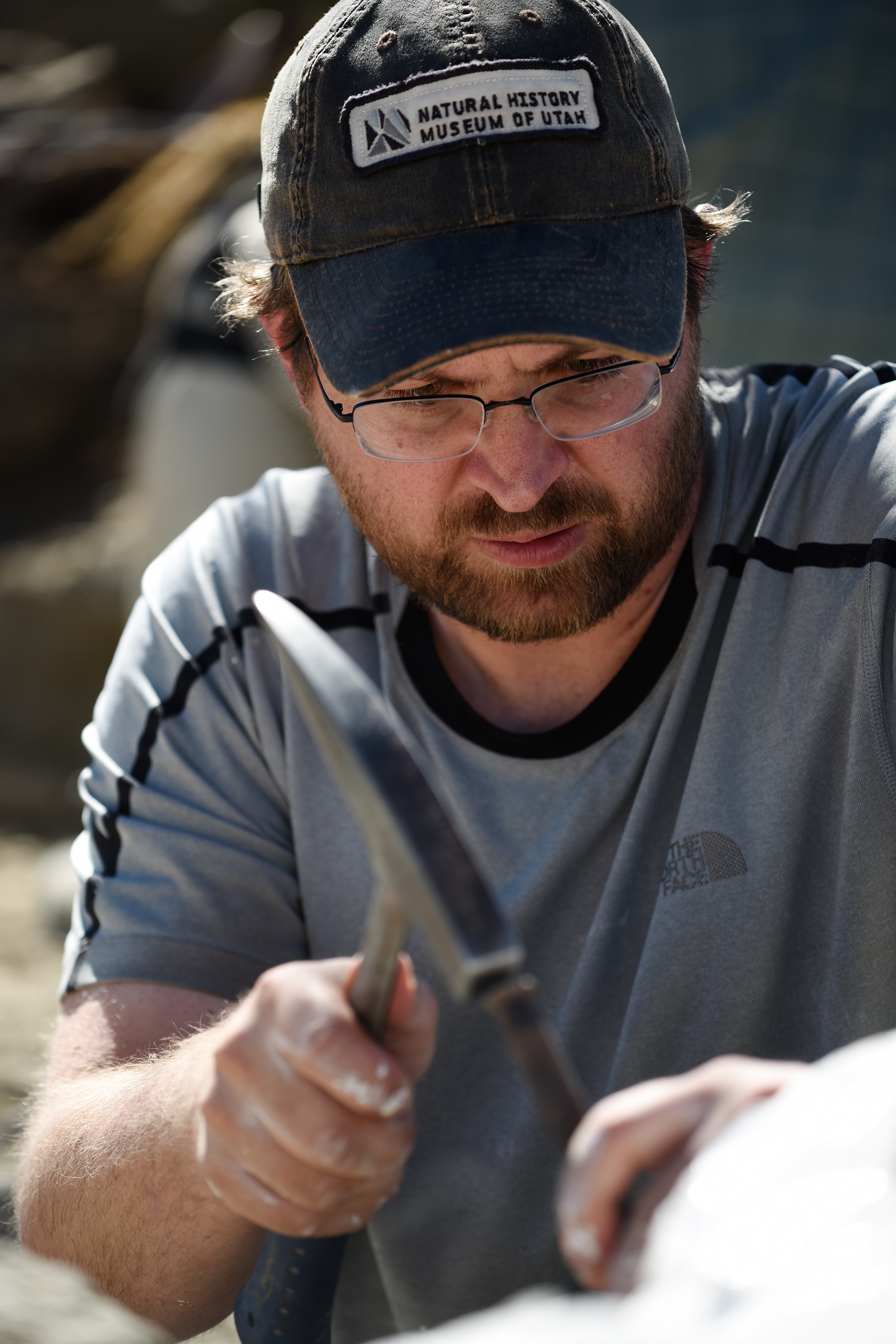 Paleontologist Randall Irmis, the curator of paleontology at the Natural History Museum of Utah, extricates a fossilized rib from the matrix containing the fossilized remains of a tyrannosaur found in Grand Staircase-Escalante National Monument Tuesday, Oct. 3, 2017. The skeleton was the most complete of its kind found in the Southwest United States.

“With at least 75 percent of its bones preserved, this is the most complete skeleton of a tyrannosaur ever discovered in the southwestern U.S.,” said Randall Irmis, curator of paleontology at the museum and associate professor in the Department of Geology and Geophysics at the University of Utah. “We are eager to get a closer look at this fossil to learn more about the southern tyrannosaur’s anatomy, biology and evolution.”

GSENM paleontologist Alan Titus discovered the fossil in July 2015 in the Kaiparowits Formation, part of the central plateau region of the monument. Particularly notable is that the fossil includes a nearly complete skull. Scientists hypothesize that this tyrannosaur was buried either in a river channel or by a flooding event on the floodplain, keeping the skeleton intact.

“The monument is a complex mix of topography — from high desert to badlands — and most of the surface area is exposed rock, making it rich grounds for new discoveries, said Titus.  “And we’re not just finding dinosaurs, but also crocodiles, turtles, mammals, amphibians, fish, invertebrates and plant fossils — remains of a unique ecosystem not found anywhere else in the world.”

Although many tyrannosaur fossils have been found over the last one hundred years in the Great Plains regions of the northern U.S. and Canada, until relatively recently, little was known about them in the southern U.S. This discovery, and the resulting research, will continue to cement GSENM as a key place for understanding the tyrannosaur’s southern history, which appears to have followed a different path than that of their northern counterparts.

This southern tyrannosaur fossil is thought to be a sub-adult individual, 12-15 years old, 17-20 feet long, and with a relatively short head, unlike the typically longer-snouted look of northern tyrannosaurs.

Collecting such fossils from the monument can be unusually challenging. “Many areas are so remote that often we need to have supplies dropped in and the crew hikes in,” said Irmis. For this particular field site, museum and monument crews back-packed in, carrying all of the supplies they needed to excavate the fossil, such as plaster, water and tools to work at the site for several weeks. The crews conducted a three-week excavation in early May 2017, and continued work during the past two weeks until the specimen was ready to be airlifted out.

Irmis said with the help of dedicated volunteers, it took approximately 2,000-3,000 people hours to excavate the site and estimates at least 10,000 hours of work remain to prepare the specimen for research. “Without our volunteer team members, we wouldn’t be able to accomplish this work. We absolutely rely on them throughout the entire process,” said Irmis.

Irmis said that this new fossil find is extremely significant. Whether it is a new species or an individual of Teratophoneus, the new research will provide important context as to how this animal lived. “We’ll look at the size of this new fossil, it’s growth pattern, biology, reconstruct muscles to see how the animal moved, how fast could it run and how it fed with its jaws. The possibilities are endless and exciting,” said Irmis. 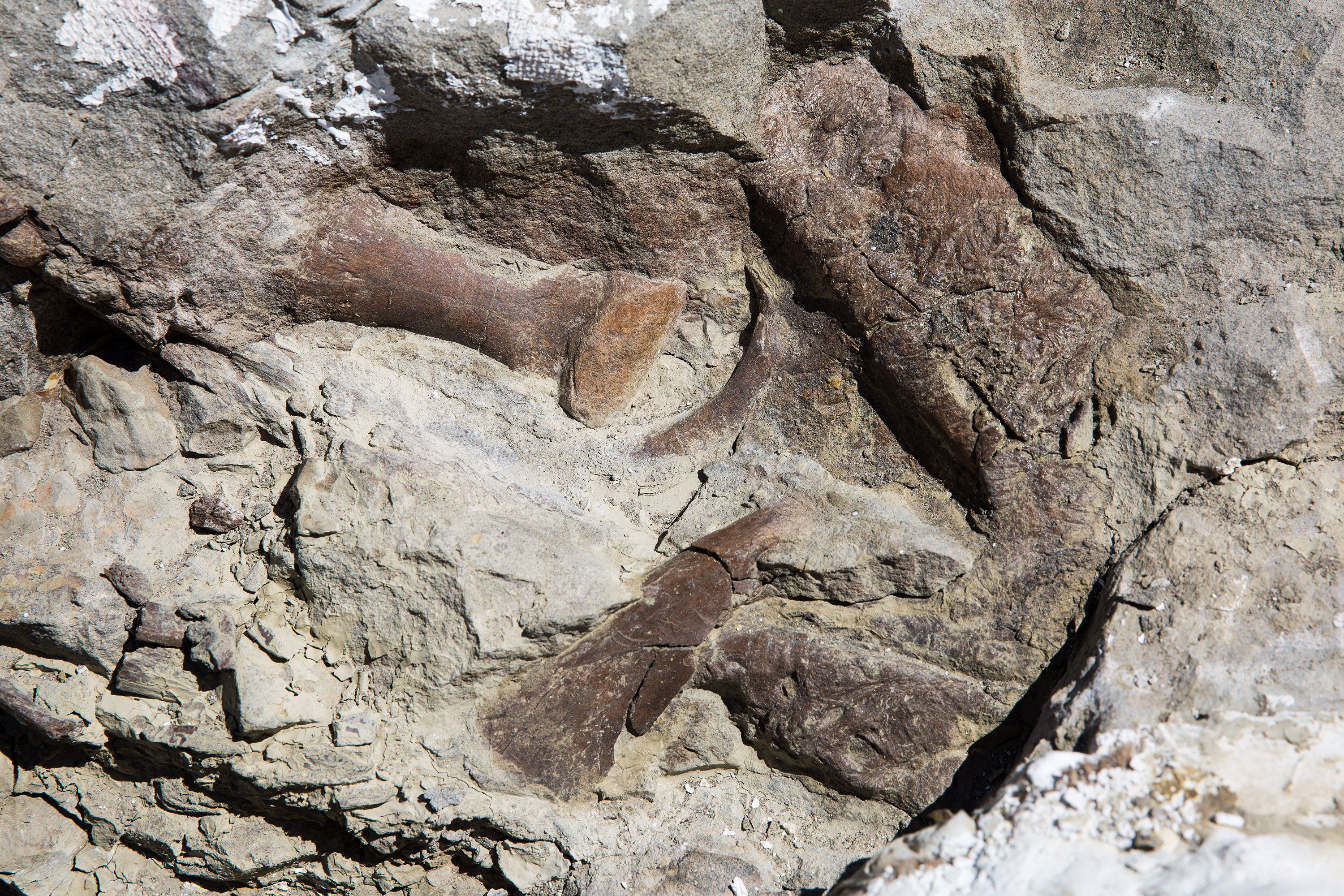 Toe bones, the upper jaw, and snout of the fossilized remains of a tyrannosaur skeleton found in Grand Staircase-Escalante National Monument Tuesday, Oct. 3, 2017. The skeleton is the most complete of its kind found in the Southwest United States.

During the past 20 years, crews from the Natural History Museum of Utah and GSENM have unearthed more than a dozen new species of dinosaurs in the monument, with several additional species awaiting formal scientific description. Some of the finds include another tyrannosaur named Lythronax, and a variety of other plant-eating dinosaurs — among them duck-billed hadrosaurs, armored ankylosaurs, dome-headed pachycephalosaurs and a number of horned dinosaurs, such as Utahceratops, Kosmoceratops, Nasutoceratops and Machairoceratops.  Other fossil discoveries include fossil plants, insect traces, snails, clams, fishes, amphibians, lizards, turtles, crocodiles and mammals. Together, this diverse bounty of fossils is offering one of the most comprehensive glimpses into a Mesozoic ecosystem. Remarkably, virtually all of the dinosaur species found in GSENM appear to be unique to this area, and are not found anywhere else on Earth.

Fieldwork was conducted under permits issued by the Bureau of Land Management. Funding was provided by the BLM National Conservation Lands Scientific Studies Support Program, Grand Staircase-Escalante National Monument, and University of Utah.