“One Drop of Love”

Fanshen Cox DiGiovanni will perform her one-woman show, “One Drop of Love,” about the evolution of race in the United States and how it affects relationships at the Jeanne Wagner Theatre in Salt Lake City’s Rose Wagner Performing Arts Center, 138 West 300 South, Tuesday, Mar. 29, 6 p.m. The show is produced by her lifelong friends, Ben Affleck and Matt Damon.

The performance celebrates the 10th anniversary of the University of Utah College of Social Work’s Social Justice Lecture Series: Allies for Equity. The event is free and open to the public. Tickets are not required, but seating is only available for the first 300 attendees.

“We chose a play, rather than a lecture or a presentation, in hopes that it will resonate with the audience in a deeper way,” said Irene Ota, diversity coordinator and instructor at the U’s College of Social Work. “One Drop of Love should encourage meaningful conversations about race and what it means to be mixed race in the United States.” 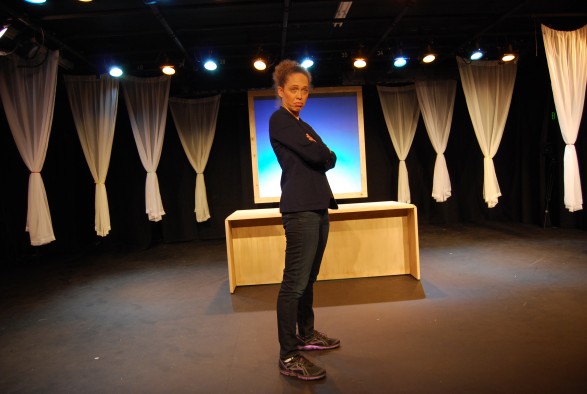 Fanshen Cox DiGiovanni performing her one-woman show, “One Drop of Love,” about the evolution of race in the United States and how it affects relationships.

Using 16 unique characters, Cox DiGiovanni, takes audiences on a journey that spans 223 years and asks audience members to ponder who they are, where they come from, their identity and their history. Cox DiGiovanni engages her audiences by walking off the stage, into the audience and asking them questions. By the end, everyone is involved in the story.

“My biggest take away from ‘One Drop’ is the urgency and the need to have difficult conversations,” said Affleck on the “One Drop of Love” website. “We all need to force ourselves into uncomfortable places to have uncomfortable conversations.”

The multimedia show uses screen projections with video, audio and animation to add the context of space and time.

“I hope people will focus less on what our differences in race are and focus on what we all have in common, which is that none of us want racism,” said Cox DiGiovanni in an interview with the Phoenix New Times. “We created race to oppress people, so let’s not focus on these differences and instead focus on where we can unify.”