Pain in the Neck

For millions of sufferers, there is nothing more debilitating than chronic back or joint pain. It can feel like a lifetime of misery.

But researchers led by University of Utah bioengineering assistant professor Robby Bowles have discovered a way to curb chronic pain by modulating genes that reduce tissue- and cell-damaging inflammation.

“This has applications for many inflammatory-driven diseases,” Bowles says. “It could be applied for arthritis or to therapeutic cells that are being delivered to inflammatory environments that need to be protected from inflammation.” 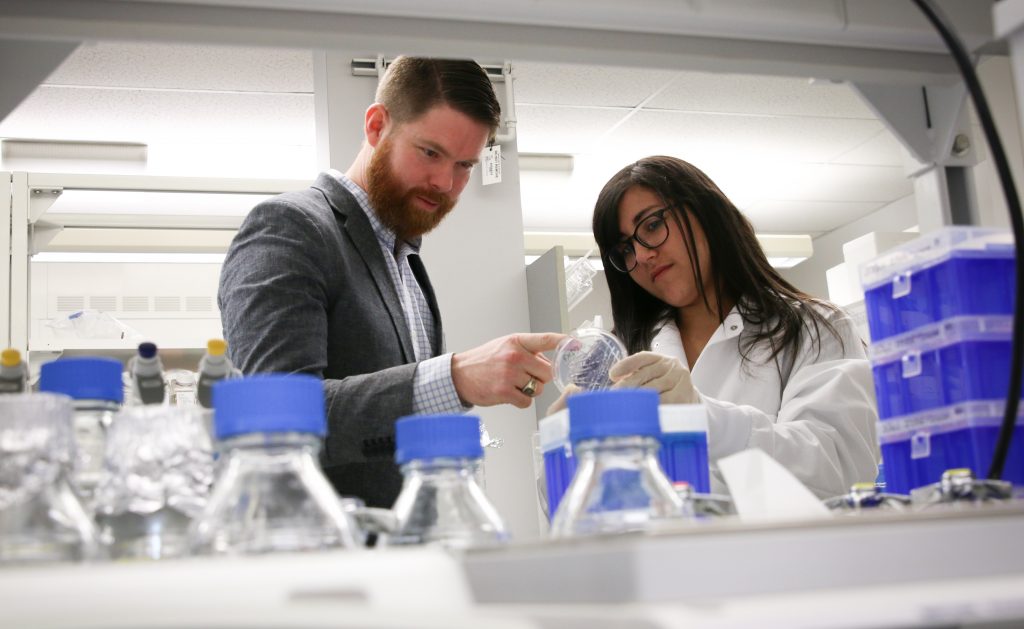 University of Utah bioengineering assistant professor Robby Bowles and bioengineering doctoral student Niloofar Farhan are part of a team that has discovered a way to curb chronic pain by modulating genes that reduce tissue- and cell-damaging inflammation. The team is using the CRISPR (Clustered Regularly Interspaced Short Palindromic Repeat) system — new technology of modifying human genetics — to stop cell death and keep the cells from producing molecules that damage tissue and result in chronic pain.

The team’s discovery was published in a new paper this month, “CRISPR-Based Epigenome Editing of Cytokine Receptors for the Promotion of Cell Survival and Tissue Deposition in Inflammatory Environments,” in a special issue of Tissue Engineering. University of Utah bioengineering doctoral student, Niloofar Farhang, co-authored the study, which is a collaborative project between the University of Utah, Duke University and Washington University in St. Louis.

In chronic back pain, for example, slipped or herniated discs are a result of damaged tissue when inflammation causes cells to create molecules that break down tissue. Typically, inflammation is nature’s way of alerting the immune system to repair tissue or tackle infection. But chronic inflammation can instead lead to tissue degeneration and pain.

Bowles’ team is using the CRISPR (Clustered Regularly Interspaced Short Palindromic Repeat) system — new technology of modifying human genetics — to stop cell death and keep the cells from producing molecules that damage tissue and result in chronic pain. But it doesn’t do this by editing or replacing genes, which is what CRISPR tools are typically used for. Instead, it modulates the way genes turn on and off in order to protect cells from inflammation and thus breaking down tissue.

“So they won’t respond to inflammation. It disrupts this chronic inflammation pattern that leads to tissue degeneration and pain,” Bowles says. “We’re not changing what is in your genetic code. We’re altering what is expressed. Normally, cells do this themselves, but we are taking engineering control over these cells to tell them what to turn on and turn off.”

Now that researchers know they can do this, doctors will be able to modify the genes via an injection directly to the affected area and delay the degeneration of tissue. In the case of back pain, a patient may get a discectomy to remove part of a herniated disc to relieve the pain, but tissue near the spinal cord may continue to breakdown, leading to future pain. This method could stave off additional surgeries by stopping the tissue damage.

“The hope is that this stops degeneration in its tracks, and the patient could avoid any future surgeries,” Bowles says. “But it’s patient to patient. Some might still need surgery, but it could delay it.”

So far, the team has developed a virus that can deliver the gene therapy and has filed a patent on the system. They hope to proceed to human trials after collecting initial data, but Bowles believes it could be about 10 years before this method is used in patients.