Jan. 6, 2017— Many people head to the mountains in the summer to get above the haze of the cities and valleys. A new study finds that the haze could be catching up.

University of Utah atmospheric scientist Gannet Hallar and colleagues find a correlation between the severity of drought in the Intermountain West and the summertime air quality, particularly the concentration of aerosol particles, in remote mountain wilderness regions. The link between drought and haze is likely wildfire, the researchers write in Environmental Research Letters. Climate projections suggest that drought and wildfire risk will continue to increase in coming decades.

“If you take that into the future, we’re going to see significant hazing of the West,” Hallar says. PHOTO CREDIT: IMPROVE is a collaborative association of state, tribal, and federal agencies, and international partners. US Environmental Protection Agency is the primary funding source, with contracting and research support from the National Park Service.

Idaho’s Sawtooth Wilderness, with a simulated view of hazy conditions on the right.

Haze in the air is caused by small airborne particles—typically dust, soot, ash or smoke. Aerosols are particles so small that they are suspended in air and don’t settle out. Fog and steam can also be considered aerosols.

Their role in modifying the climate is significant, depending on the composition of the particles. Dust particles made of mineral grains can reflect solar energy, providing a cooling effect. Aerosol particles made of organic carbon, such as soot or smoke, can absorb energy, however, warming the climate. Further, aerosol particles can trigger cloud formation, which exerts its own influence over global temperature and climate. Aerosols are an important component of the atmospheric energy balance.

Hallar conducts research at Storm Peak Laboratory, a research lab near Steamboat Springs, Colorado, at an elevation of 10,525 feet above sea level. The lab, a part of the Desert Research Institute, measures aerosol optical depth, the amount of aerosols between the sensor and the sun. Researchers noticed that decades of aerosol optical depth records consistently showed increased in the summer. A previous global study of aerosols had showed that, in general, aerosol concentrations were decreasing across the United States except for a summertime peak at a site in the western U.S. 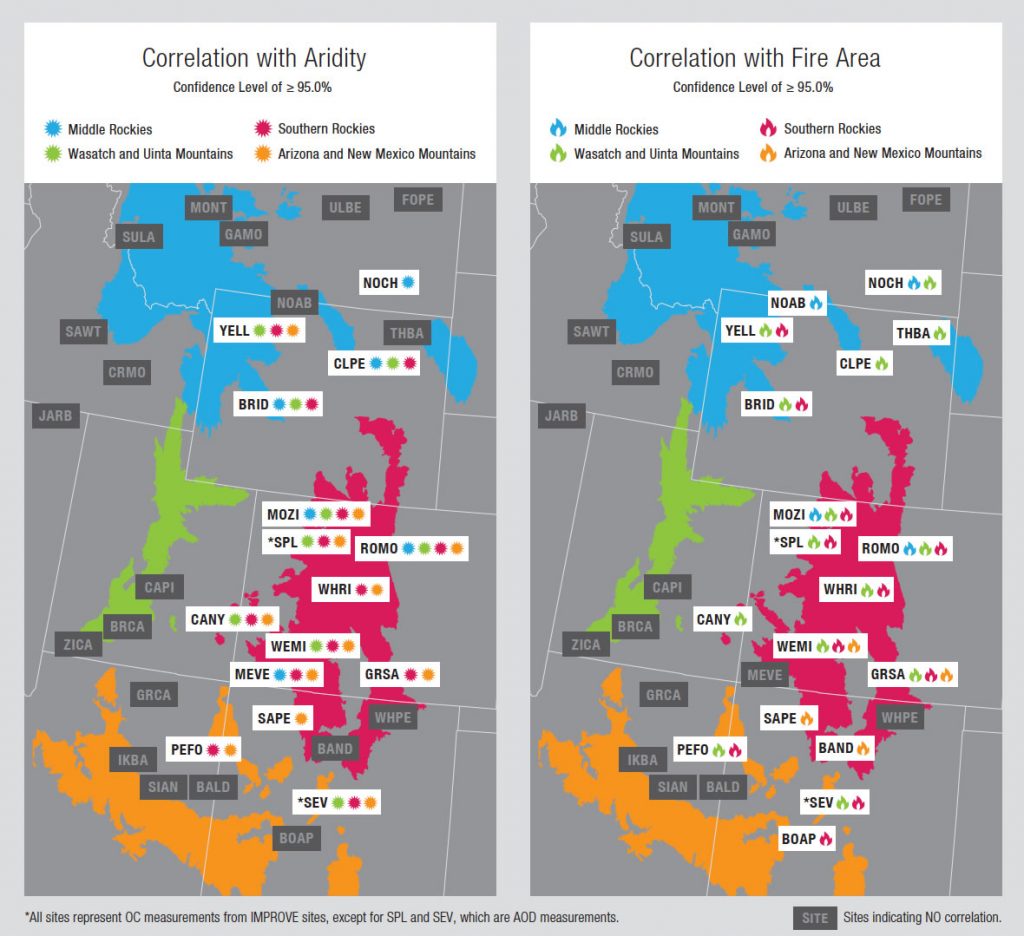 The team, consisting of hydrologists and atmospheric scientists, looked at climate and drought records for the West to see if they could find a connection to the summer mountain haze. They found a correlation between drought and high-elevation aerosols, with a very likely explanation. “It’s the fires,” Hallar says. Further analysis of summer wildfire area burnt in the West showed a good correlation with aerosol optical depth in the northern, central and southern Rockies.

Hallar says that her team’s observations allow for comparison with climate models’ simulated effects of fires on aerosol emissions. The models use assumptions to estimate how much aerosol pollution results from an area of forest burned, which can lead to uncertainties in the conclusions. “We’re putting a moment of real data in there,” Hallar says, and notes that their observational data isn’t far off from what the models predict. “That has me concerned because climate models are predicting in the future a significant increase in organic aerosol loading.”

Even more concerning is that Hallar’s data came from wilderness areas—those preserved for their untouched natural beauty. A wilderness area’s borders, however, can’t keep the haze out.

Hallar hopes that her results highlight the importance of managing the relationship between drought, fire and haze in the West. “We need to think about fires in the realm of air quality,” she says.

Authors of the study were supported by the Desert Research Institute, the U.S. Department of Agriculture, and the National Oceanic and Atmospheric Administration.