Around A.D. 79, Roman author Pliny the Elder wrote in his Naturalis Historia that concrete structures in harbors, exposed to the constant assault of the saltwater waves, become “a single stone mass, impregnable to the waves and every day stronger.”

He wasn’t exaggerating. While modern marine concrete structures crumble within decades, 2,000-year-old Roman piers and breakwaters endure to this day and are stronger now than when they were first constructed. University of Utah geologist Marie Jackson studies the minerals and microscale structures of Roman concrete as she would a volcanic rock. She and her colleagues have found that seawater filtering through the concrete leads to the growth of interlocking minerals that lend the concrete added cohesion. The results are published today in American Mineralogist. 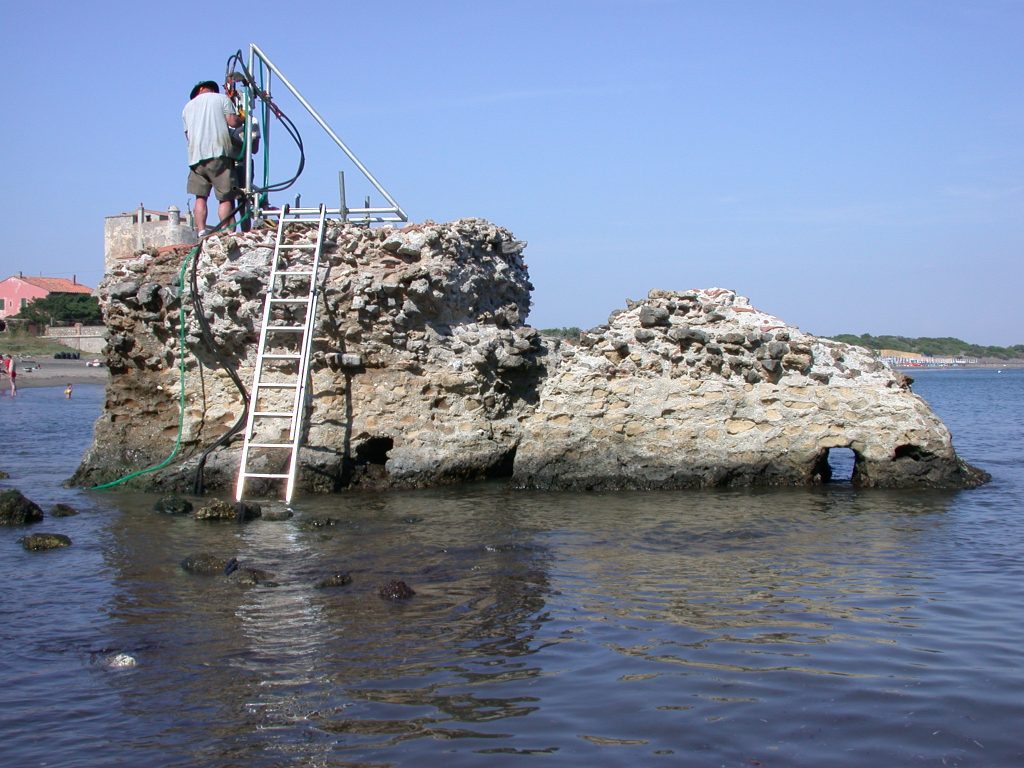 ROMACONS drilling at a marine structure in Portus Cosanus, Tuscany, 2003. Drilling is by permission of the Soprintendenza Archeologia per la Toscana.

Romans made concrete by mixing volcanic ash with lime and seawater to make a mortar, and then incorporating into that mortar chunks of volcanic rock, the “aggregate” in the concrete. The combination of ash, water, and quicklime produces what is called a pozzolanic reaction, named after the city of Pozzuoli in the Bay of Naples. The Romans may have gotten the idea for this mixture from naturally cemented volcanic ash deposits called tuff that are common in the area, as Pliny described.

The conglomerate-like concrete was used in many architectural structures, including the Pantheon and Trajan’s Markets in Rome. Massive marine structures protected harbors from the open sea and served as extensive anchorages for ships and warehouses.

Modern Portland cement concrete also uses rock aggregate, but with an important difference: the sand and gravel particles are intended to be inert. Any reaction with the cement paste could form gels that expand and crack the concrete.

“This alkali-silica reaction occurs throughout the world and it’s one of the main causes of destruction of Portland cement concrete structures,” Jackson says. 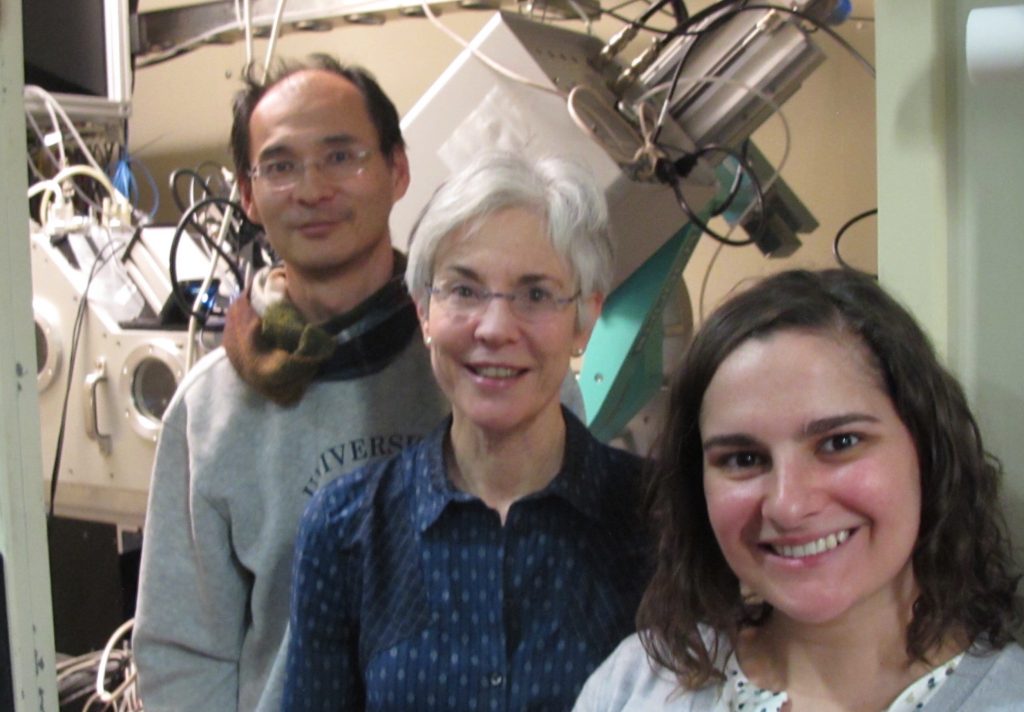 Jackson’s interest in Roman concrete began with a sabbatical year in Rome. She first studied tuffs and then investigated volcanic ash deposits, soon becoming fascinated with their roles in producing the remarkable durability of Roman concrete.

Along with colleagues, Jackson began studying the factors that made architectural concrete in Rome so resilient. One factor, she says, is that the mineral intergrowths between the aggregate and the mortar prevent cracks from lengthening, while the surfaces of nonreactive aggregates in Portland cement only help cracks propagate farther.

In another study of drill cores of Roman harbor concrete collected by the ROMACONS project in 2002-2009, Jackson and colleagues found an exceptionally rare mineral, aluminous tobermorite (Al-tobermorite) in the marine mortar. The mineral crystals formed in lime particles through pozzolanic reaction at somewhat elevated temperatures. The presence of Al-tobermorite surprised Jackson. “It’s very difficult to make,” she says of the mineral. Synthesizing it in the laboratory requires high temperatures and results in only small quantities.

For the new study, Jackson and other researchers returned to the ROMACONS drill cores, examining them with a variety of methods, including microdiffraction and microfluorescence analyses at the Advanced Light Source beamline 12.3.2 at Lawrence Berkeley National Laboratory. They found that Al-tobermorite and a related zeolite mineral, phillipsite, formed in pumice particles and pores in the cementing matrix. From previous work, the team knew that the pozzolanic curing process of Roman concrete was short-lived. Something else must have caused the minerals to grow at low temperature long after the concrete had hardened. “No one has produced tobermorite at 20 degrees Celsius,” she says. “Oh — except the Romans!”

“As geologists, we know that rocks change,” Jackson says. “Change is a constant for earth materials. So how does change influence the durability of Roman structures?” 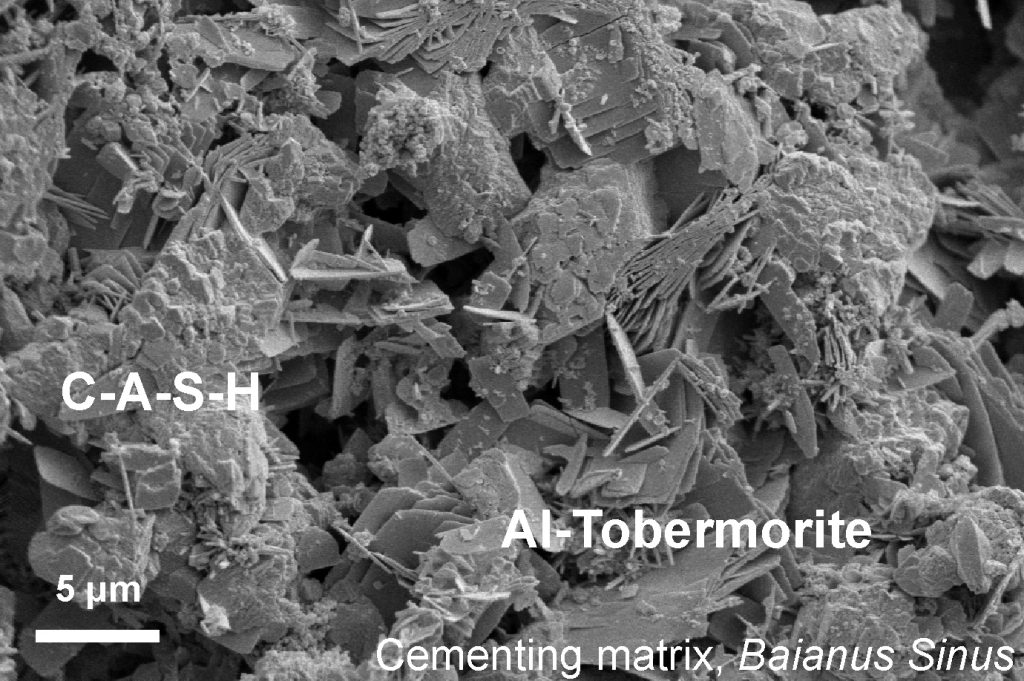 This microscopic image shows the lumpy calcium-aluminum-silicate-hydrate (C-A-S-H) binder material that forms when volcanic ash, lime and seawater mix. Platy crystals of Al-tobermorite have grown amongst the C-A-S-H in the cementing matrix.

The team concluded that when seawater percolated through the concrete in breakwaters and in piers, it dissolved components of the volcanic ash and allowed new minerals to grow from the highly alkaline leached fluids, particularly Al-tobermorite and phillipsite. This Al-tobermorite has silica-rich compositions, similar to crystals that form in volcanic rocks. The crystals have platy shapes that reinforce the cementing matrix. The interlocking plates increase the concrete’s resistance to brittle fracture.

“The recipe was completely lost,” Jackson says. She has extensively studied ancient Roman texts, but hasn’t yet uncovered the precise methods for mixing the marine mortar, to fully recreate the concrete.

“Romans were fortunate in the type of rock they had to work with,” she says. “They observed that volcanic ash grew cements to produce the tuff. We don’t have those rocks in a lot of the world, so there would have to be substitutions made.”

She is now working with geological engineer Tom Adams to develop a replacement recipe, however, using materials from the western U.S. The seawater in her experiments comes from the Berkeley, California, marina, collected by Jackson herself.

Roman concrete takes time to develop strength from seawater, and features less compressive strength than typical Portland cement. For those reasons, it’s unlikely that Roman concrete could become widespread, but could be useful in particular contexts.

Jackson recently weighed in on a proposed tidal lagoon to be built in Swansea, United Kingdom, to harness tidal power. The lagoon, she says, would need to operate for 120 years to recoup the costs incurred to build it. “You can imagine that, with the way we build now, it would be a mass of corroding steel by that time.” A Roman concrete prototype, on the other hand, could remain intact for centuries.

Jackson says that while researchers have answered many questions about the mortar of the concrete, the long-term chemical reactions in the aggregate materials remain unexplored. She intends to continue the work of Pliny and other Roman scholars who worked assiduously to discover the secrets of their concrete. “The Romans were concerned with this,” Jackson says. “If we’re going to build in the sea, we should be concerned with it too.”