Over the past two decades there has been a sharp rise in the number and severity of infections caused by the bacteria Clostridium difficile, often shortened to C. diff, now the most common hospital acquired infection in the United States. But a new study suggests that the most routinely prescribed antibiotic is not the best treatment for severe cases. Scientists at the VA Salt Lake City Health Care System and University of Utah report that patients with a severe C. diff infection (CDI) were less likely to die when treated with the antibiotic vancomycin compared to the standard treatment of metronidazole. The findings are published online on Feb. 6 on the Journal of the American Medical Association (JAMA) Internal Medicine website. 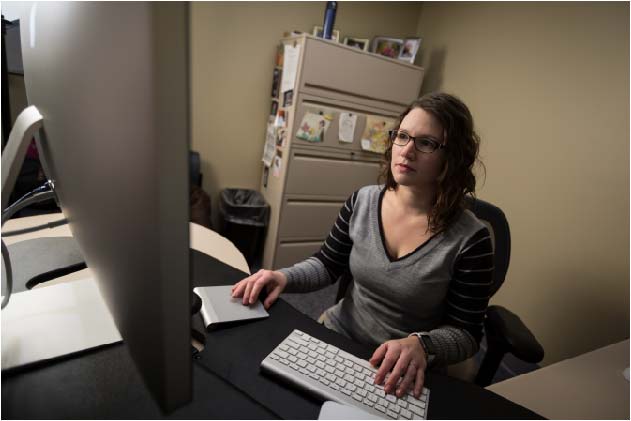 Vanessa Stevens, Ph.D., found patients with a severe CDI were less likely to die when treated with the antibiotic vancomycin.

The Centers for Disease Control and Prevention (CDC) report that almost half a million Americans, mostly 65 or older, developed CDI in 2011. Of those, 83,000 patients experienced recurrence of infection within 30 days of completing the standard course of antibiotics. “This is a very real problem that impacts the patients’ quality of life,” says the study’s lead author Vanessa Stevens, a research assistant professor in the department of internal medicine and an investigator at the IDEAS 2.0 Center at the VA. In addition, the study showed that there is up to a 20 percent chance of mortality within 30 days of a CDI diagnosis.

C. diff does not cause illness outright. The bacterium produces two chemicals that are toxic to the human body. These toxins work in concert to irritate the cells of the intestinal lining producing the symptoms associated with the illness. Symptoms of CDI include watery diarrhea, fever, loss of appetite, nausea, and abdominal pain and tenderness. Severe cases are associated with inflammation of the colon.

Current guidelines primarily recommend two antibiotics, metronidazole or vancomycin, to treat CDI. While vancomycin was the original treatment, the medical community has favored metronidazole for the past few decades, because it is less expensive and will limit vancomycin resistance in other hospital-acquired infections. The guidelines are based on small clinical trials carried out about 30 years ago.

“For many years the two antibiotics were considered to be equivalent in their ability to cure C. diff and prevent recurrent disease,” says Stevens. “Our work and several other studies show that this isn’t always the case.” In the current issue of JAMA Internal Medicine, the research team looked at the effectiveness of the two drugs by comparing the risk of mortality after treatment with these two antibiotics.

Patients with a severe case of CDI had lower mortality rates when treated with vancomycin compared to metronidazole (15.3 percent versus 19.8 percent).  The scientists calculated that only 25 patients with severe CDI would need to be treated with vancomycin to prevent one death. “That is a powerful, positive outcome for our patient’s well-being,” explains Stevens. She cautions that the researchers still do not understand how the choice of antibiotic affects mortality rates.

“Although antibiotics are one of the greatest miracles of modern medicine, there are still tremendous gaps in our knowledge about when and how to use them to give our patients the best health outcomes,” explains Michael Rubin, an associate professor in internal medicine and an investigator at the VA Salt Lake City Health Care System.

“This research shows that if providers choose vancomycin over metronidazole to treat patients with severe CDI, it should result in a lower risk of death for those critically ill patients,” said Rubin. This study showed that less than 15 percent of CDI patients, including severe cases, received vancomycin.

Stevens cautions that the study was observational in nature and does not prove cause and effect of the drug. In addition, the study focused on patients that were primarily men; however, past studies show that the C. diff treatment outcomes for men and women were similar.

According to Stevens, future work should balance the targeted application of vancomycin treatment, especially for severe CDI cases, with economic considerations and the consequences of antibiotic resistance. “The optimal way to move forward is to do decision analysis that allows us to weigh the pros and cons of the various treatment strategies,” she says.