The University of Utah’s Department of Theatre presents Naomi Iizuka’s “Good Kids,” which explores the very public aftermath of a sex crime and its cover-up. Directed by College of Fine Arts Post MFA Fellow Julie Rada, the production runs Oct. 30-Nov. 8 in Studio 115 in the Performing Arts Building, 240 S. 1500 East. The Department of Theatre has partnered with the Student Wellness Center, the Women’s Resource Center and other sexual assault support advocates to guide post-performance discussions, bystander training and talkbacks to generate awareness and conversations about sexual assault. 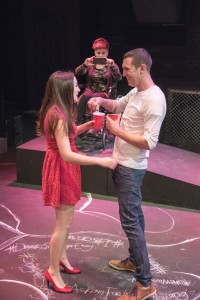 The plot is based on the widely reported incidents in Steubenville, Ohio, in 2012

The plot is based on the widely reported incidents in Steubenville, Ohio, in 2012, in which four high school football players assaulted a young woman while she was unconscious and then used social media to foolishly broadcast their exploits to the world. The fallout was almost as disturbing as the event, as tweets, posts and media outlets rushed in defending the perpetrators of the crime and publicly shaming the young woman. Rape in the digital age took on new implications. Somehow the assault was everyone’s business and commentary abounded.

“Though ‘Good Kids’ is difficult, it is not always dark,” said Rada. “As we have worked on this piece, the team has discovered the humor in the play and, more importantly, the humanity. The characters are flawed and complicated. There are moments of pain and there are moments of poetry. The show oscillates between gritty dialogue and heightened lyricism. It is dark and ugly, but it is also light and beautiful. The play begins and ends with the same question: one in five women are raped on college campuses, so what are we going to do about it?”

To initiate the dialogue about sexual assault, rehearsals have included trainings by the University’s Center for Disability Services, the Wellness Center, the Women’s Resource Center and off-campus community partners, such as the Rape Recovery Center and “When She Speaks…” feminist open mic.

“Good Kids” at a Glance

Location: Studio 115 in the Performing Arts Building, 240 S. 1500 East. Parking is available in the visitor’s lot to the south of the theatre, at Rice-Eccles Stadium or on Presidents Circle.

Tickets: General Admission tickets are $18, University of Utah faculty and staff are $15, University of Utah students are free with UCard and all other students with valid student ID are $8.50. Tickets can be obtained by calling 801-581-7100, online at kingtix.com or at the Performing Arts Box Office, located at Kingsbury Hall.

Content warning: Recommended for patrons ages 15 and up. Mature audiences only. This production explores adult themes and contains adult content.

Photos: High-resolution digital images for this production are available for download and media use here.