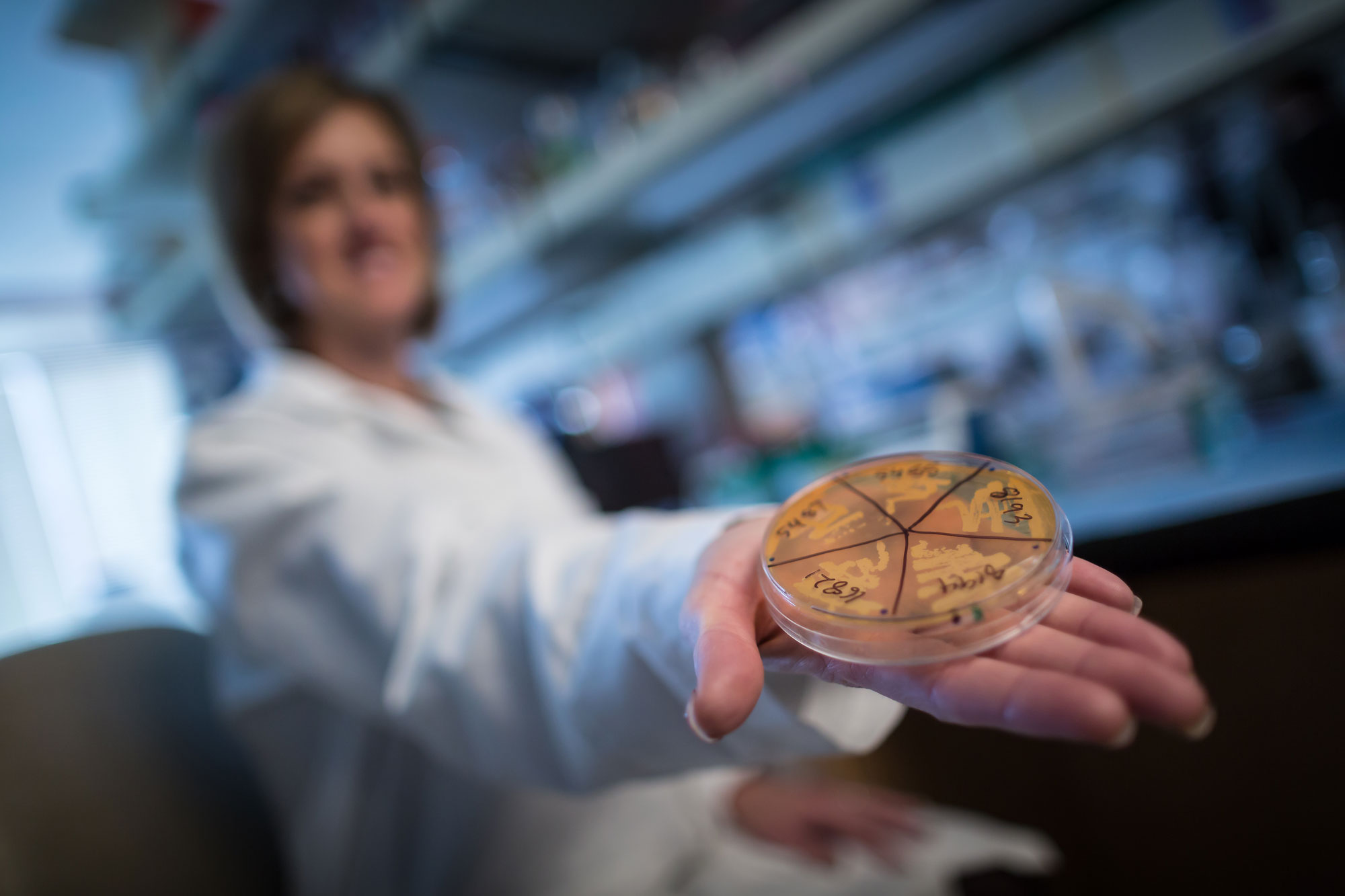 Researchers at University of Utah Health have identified a specific class of bacteria from the gut that prevents mice from becoming obese, suggesting these same microbes may similarly control weight in people. The beneficial bacteria, called Clostridia, are part of the microbiome — collectively trillions of bacteria and other microorganisms that inhabit the intestine.

Published online in the journal Science on July 25, the study shows that healthy mice have plenty of Clostridia — a class of 20 to 30 bacteria — but those with an impaired immune system lose these microbes from their gut as they age. Even when fed a healthy diet, the mice inevitably become obese. Giving this class of microbes back to these animals allowed them to stay slim.

June Round, an associate professor of pathology at U of U Health, is the study’s co-senior author along with U of U Health research assistant professor W. Zac Stephens. Charisse Petersen, a graduate student at the time, led the research. 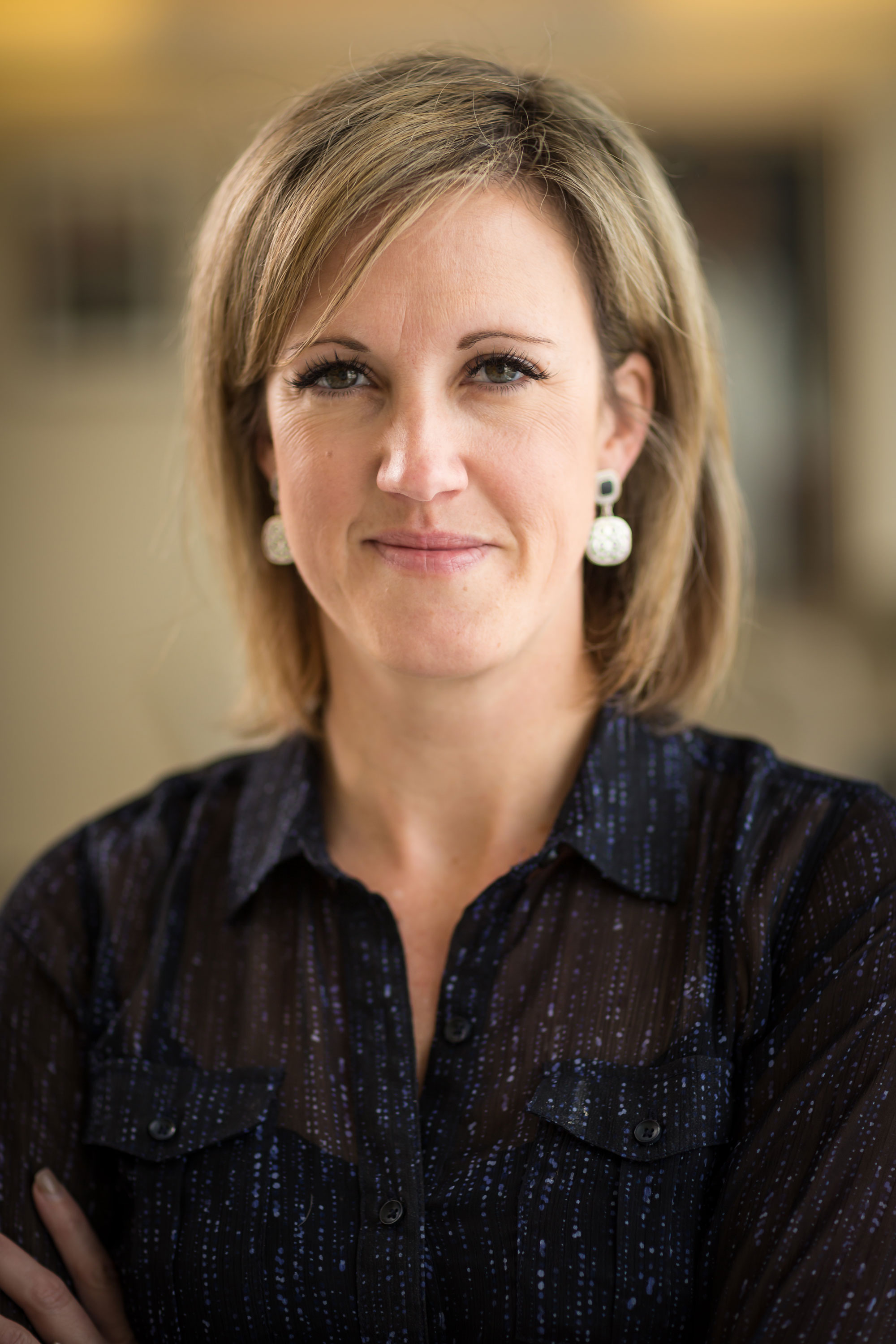 “Now that we’ve found the minimal bacteria responsible for this slimming effect, we have the potential to really understand what the organisms are doing and whether they have therapeutic value,” Round says.

Results from this study are already pointing in that direction. Petersen and colleagues found that Clostridia prevents weight gain by blocking the intestine’s ability to absorb fat. Mice experimentally treated so that Clostridia were the only bacteria living in their gut were leaner with less fat than mice that had no microbiome at all. They also had lower levels of a gene, CD36, that regulates the body’s uptake of fatty acids.

These insights could lead to a therapeutic approach, Round says, with advantages over the fecal transplants and probiotics that are now being widely investigated as ways to restore a healthy microbiota. Therapeutics such as these, that are based on transferring living microbiome to the gut, won’t work for everyone due to differences in diet and other factors that influence which bacteria can survive and thrive.

The current study found that one or more molecules produced by Clostridia prevented the gut from absorbing fat. The next step is to isolate these molecules and further characterize how they work to determine whether they could inspire focused treatments for obesity, type 2 diabetes, and other related metabolic disorders.

“These bacteria have evolved to live with us and benefit us,” Petersen says. “We have a lot to learn from them.”

A good defense is the best offense 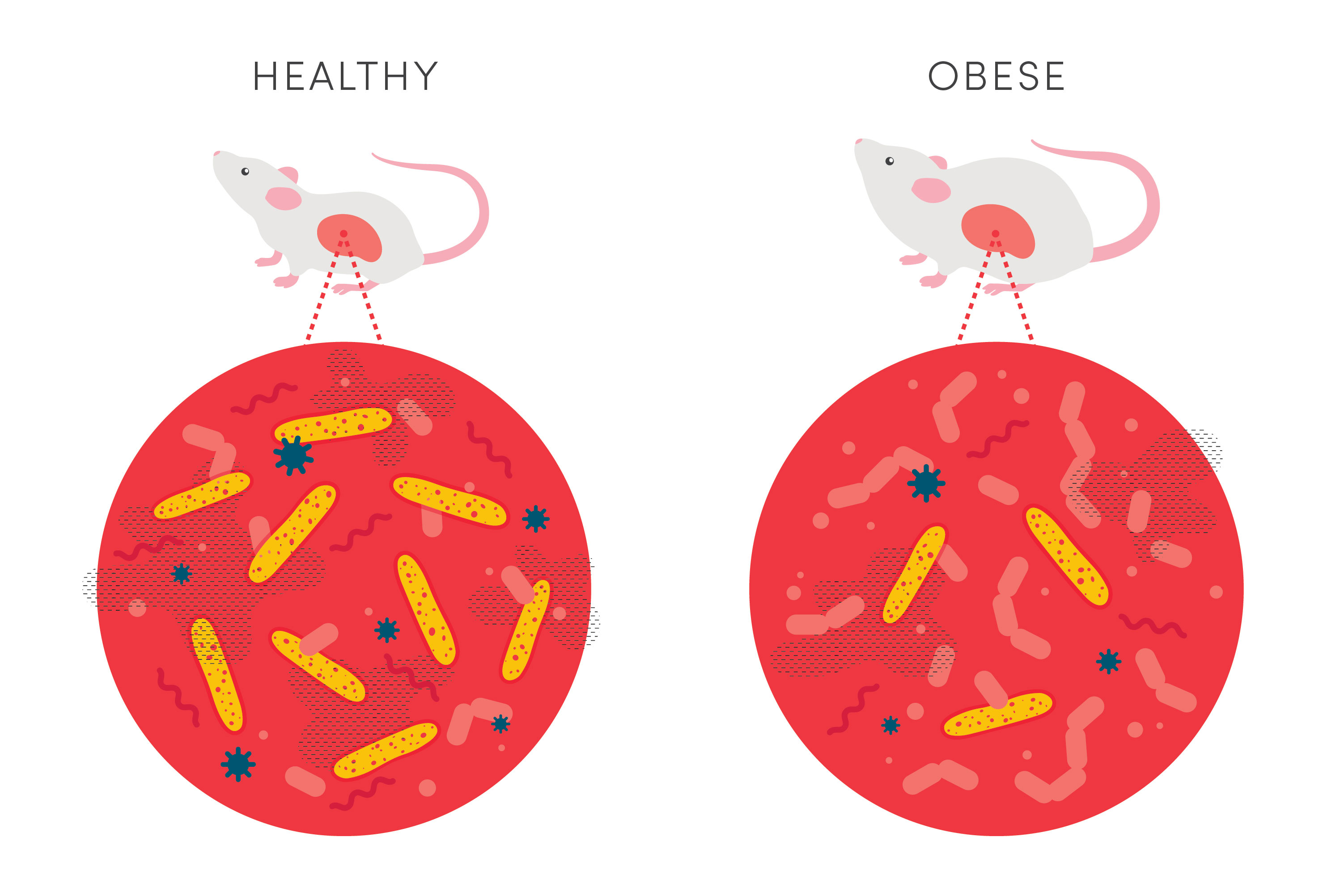 Mice that inevitably become obese have a compromised immune system and less of a class of bacteria called Clostridia in their gut microbiome than healthy mice. Giving Clostridia to the immune-impaired mice prevents obesity.

Finding that mice with a compromised immune system couldn’t help but become obese was a discovery that almost didn’t happen. Serendipity brought Petersen into the lab at the right time to see that mice genetically engineered to lack myd88, a gene central to the immune response, were “as fat as pancakes.” She had let the rodents age longer than usual, revealing an unappreciated link between immunity and obesity.

Based on previous research she had carried out in the Round lab, she suspected the microbiome was involved. She had helped demonstrate that one role of the immune system is to maintain balance among the diverse array of bacteria in the gut. Impairing the body’s defenses can cause certain bacterial species to dominate over others. Sometimes, the shift negatively impacts health.

Following a similar logic, Petersen and colleagues determined that the obesity observed in immune-compromised mice stemmed from the failure of the body’s defense system to appropriately recognize bacteria. These mice produced fewer of the antibodies that ordinarily latch onto the microbiome like target-seeking missiles. This change made the gut less hospitable for Clostridia, leading to more fat absorption and excessive weight gain. Over time, the mice also developed signs of type 2 diabetes.

Round points out that research by others have shown that people who are obese similarly lack Clostridia, mirroring the situation in these mice. There are also some indications that people who are obese or have type 2 diabetes may have a suboptimal immune response. The hope is that understanding these connections will provide new insights into preventing and treating these pervasive health conditions.

“We’ve stumbled onto a relatively unexplored aspect of type 2 diabetes and obesity,” Round says. “This work will open new investigations on how the immune response regulates the microbiome and metabolic disease.”