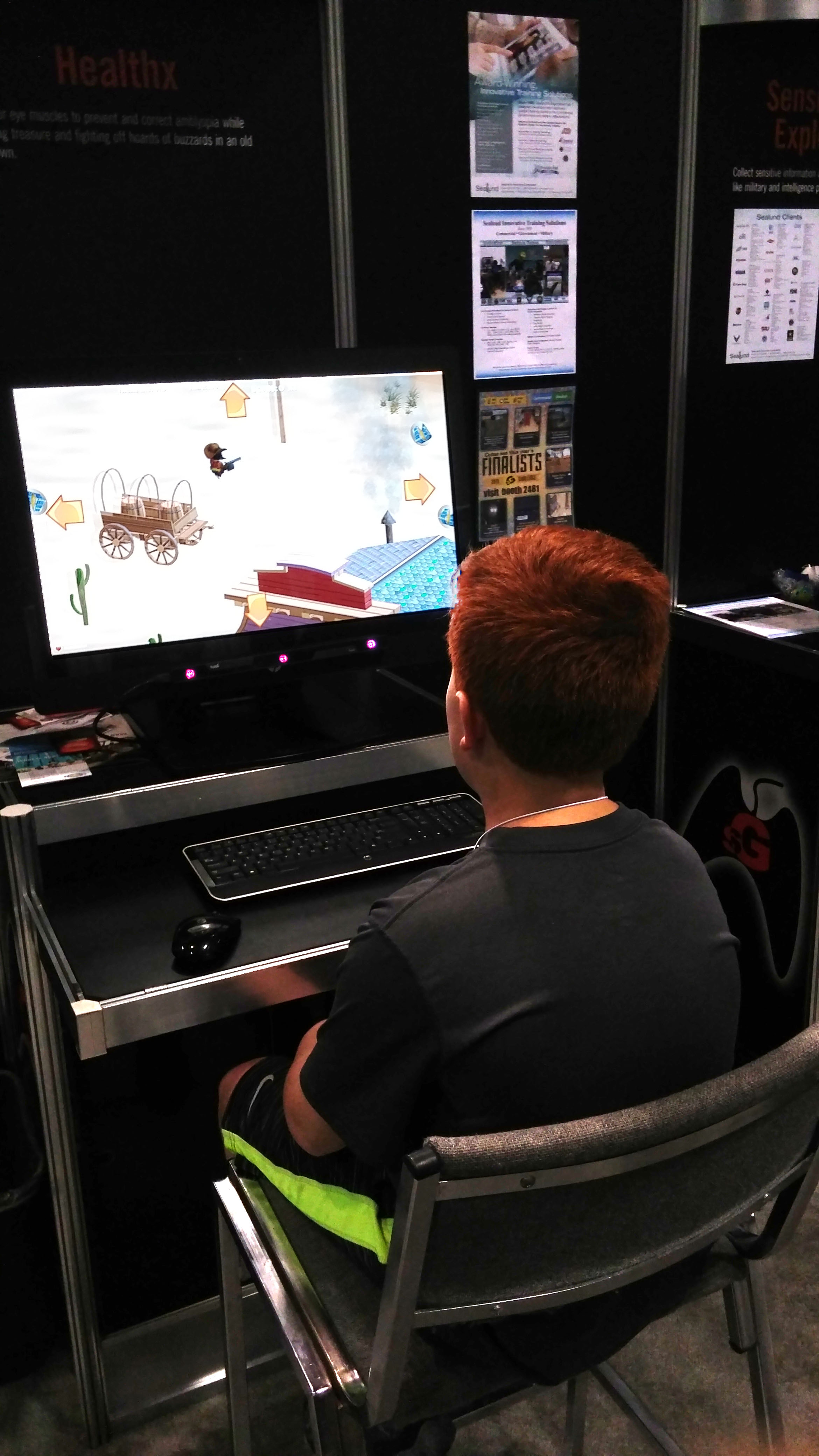 For the second year in a row, student video game developers from the University of Utah’s Entertainment Arts & Engineering (EAE) have won Best Student Game in the Serious Games Showcase & Challenge in Orlando, Florida. The award was announced Thursday, Dec. 3, for their game to help combat lazy eye in children.

Working with researchers at the John A. Moran Eye Center, a team from the U created “HealthX” to help diagnose and treat lazy eye, which can lead to permanent visual impairment if left untreated. Fully controlled by eye movement, the game forces the lazy eye to move around the screen, which can strengthen and help find the right balance between the eyes.

“Lazy eye is one of the most common eye disorders found in children,” said Ahmad Alsaleem, a graduate student in game engineering and co-researcher on “HealthX.” “Despite its prevalence, clinical treatments and current diagnostic tools are not designed with the child’s nature in mind. As researchers in the gaming field, we are working to ‘gamify’ current medical procedures. Our solution provides an engaging experience, continuous feedback and a cost effective, automated tool for treating and diagnosing lazy eye.”

“HealthX” is a collection of eye controlled games including a top down shooter that requires fast target acquisition and a slower paced balloon popping game. Both games require the player to constantly move their eyes across the screen at varied time intervals. This movement trains the eyes to work together.

“We are currently using an eye tracker that uses near infrared light to monitor the eye and its movement,” said Eric Allen, graduate student in game production and co-researcher. “We can accurately monitor and report every action the player makes.”

“HealthX” is currently in clinical trials with selected patients at the Moran Eye Center and the students hope the game will be available by the end of next year.

“Kids have a lot of fun playing the games and do not realize it is actually analyzing their eye movement for research.” said Daniel Blair, graduate student in game production and co-researcher.

The students were awarded a software packages valued at $13,000 provided by Autodesk. The game also garnered a second place prize of $2,500 in the Utah Game Wars in September.

“The Serious Games Showcase & Challenge is the premier simulation conference and our students’ success there demonstrate to the world the quality education they receive at the U,” said Roger Altizer, associate director of EAE. “Games like ‘HealthX’ show how getting gamers together with medical researchers can solve today’s health problems.”

“HealthX” will be showcased at EAE’s annual open house on Friday, Dec. 11 at 2 p.m. in the EAE West building (former law library).

The Serious Games Showcase & Challenge is a competition for video games about serious topics or those created to educate or train its players. The contest is hosted by The Interservice/Industry Training, Simulation and Education Conference, an event for U.S. armed services, and industry, government and academic institutions focused on improving training and education through computer simulations.