How much water does your lawn really need?  A University of Utah study re-evaluated lawn watering recommendations by measuring water use by lawns in Los Angeles. The standard model of turfgrass water needs, they found, lacked precision in some common urban southern California conditions, like the Santa Ana winds, or in the shade.

“The current method of estimating water use is very arbitrary,” says postdoctoral scholar Elizaveta Litvak, first author on the new study, published today in the Journal of Arid Environments. “And there has been no scientific ground for more precise recommendations.” 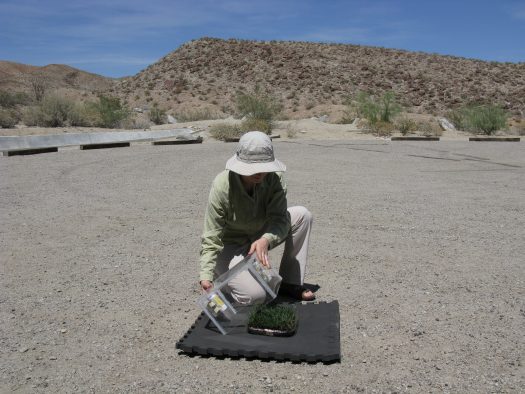 Elizaveta Litvak at the Steele/Burnand Anza-Borrego Desert Research Center in California, one of the hottest, driest areas of the US. The conditions simulated the arid Santa Ana winds.

Scientists study how much water plants lose so that landscape managers can know how much water they need to put back in. Water evaporates in a straightforward physical process that depends primarily on the temperature and humidity of the air. But plants also lose water through transpiration, breathing out water vapor as part of their metabolism. Transpiration is less predictable, because it’s controlled by the plant’s biological processes. Plants may restrict transpiration in drought conditions, for example. Transpiration rates can also vary from species to species.  The combined measure of evaporation and transpiration is called “evapotranspiration” (ET) and it’s a difficult quantity to measure. “There is no direct way to measure it,” Litvak says. “It’s like trying to capture what’s not capturable.”

Researchers attempt to determine a crop’s ET rates by placing a large greenhouse-like chamber over an area of plants and measure how temperature and humidity changed within the chamber. But the presence of such a large chamber changes the plants’ environment so much that the method is far from ideal.

The lawns of LA 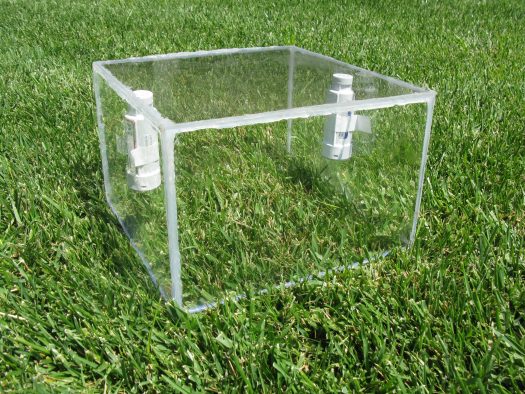 The present-day turfgrass ET model serves for estimating water use by forests and agricultural crops in various weather conditions. Urban lawns, however, are much smaller than crop fields. Although turfgrass is the largest irrigated crop in the U.S., researchers aren’t certain how the ET model holds up in the fragmented urban landscape. Tall water vapor flux towers are not the answer. “You can’t use that method in urban lawns because they’re too small,” says U biology professor Diane Pataki. “It just can’t be done where lawns form a patchwork with streets and buildings. People hadn’t gone in to cities and measured what turfgrass was actually doing.”

Yet, as the best method available, the turfgrass ET model is the foundation of California’s watering recommendations and guides the actions of advanced irrigation systems via nearby weather stations. “That’s the gold standard in California for watering,” Pataki says. 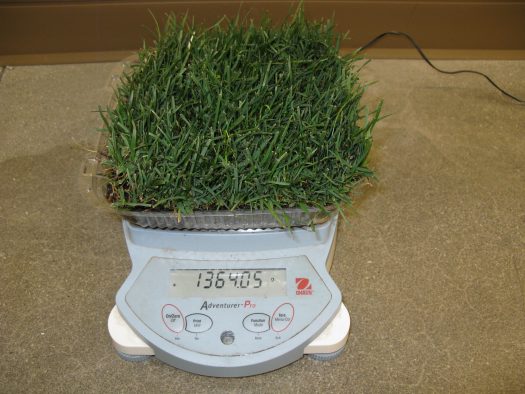 Because of the impracticality of building water vapor flux towers in residential lawns, Pataki and Litvak turned to the simple chamber method for measuring ET. They built a small clear box a bit bigger than a shoebox equipped with sensors that would instantaneously measure temperature and humidity within the box and, when set on a lawn, would provide a rapid estimate of ET.  They carefully calibrated the method by weighing lawn pieces on a precise scale to capture weight losses caused by ET.

Litvak says that she got some puzzled looks and questions while toting the mini-chamber around the LA area. Some asked if it was a science fair experiment. “It looks so primitive,” she says of the box. “It looks so simple.”

Litvak and Pataki found that their measurements of turfgrass ET didn’t always match modeled predictions. The model’s recommendations for watering shaded lawns are very vague, Pataki says, and most lawns are shaded, to some degree at some parts of the day by trees or buildings. Shade dramatically reduces plants’ water needs, so a partly-shaded lawn will need less water than unshaded.

The model also doesn’t account for the Santa Ana winds, masses of hot dry air that periodically tumble out of the mountains and through the LA area. Temperatures go up and humidity plummets. “The models can’t deal with that at all,” Pataki says. “They predict very high ET, but not as high as what we observed during those time periods.”

Litvak says that the model performs best on dense unshaded grass, possibly intentionally overwatered to keep it green. On such lush lawns, actual ET is very close to predicted. Litvak and Pataki developed an approach to adjust ET rates for different urban conditions, including dry air or partial shade, that could lead to adjusted watering recommendations. “At some level, modeled methods work,” Litvak says. “But when we transition to really low humidity, they just don’t match our findings.” 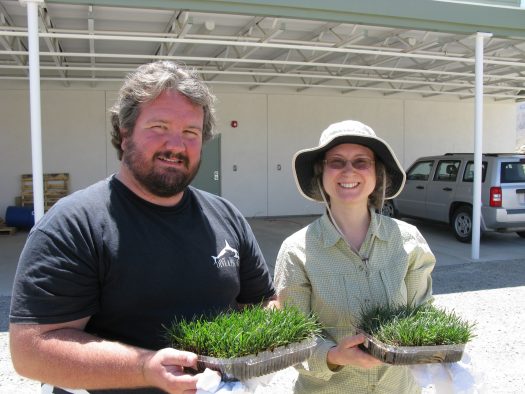 Litvak and Scot Parker, a graduate student at the University of California, Irvine, at the Steele/Burnand Anza-Borrego Desert Research Center.

Turfgrasses in California are typically fescue or Bermuda grass species, instead of the Kentucky blue grass that’s common in Utah. While the precise ET numbers may not be directly applicable in Utah, the general lessons of the study hold. Pataki and Litvak have one resounding suggestion for managing your grass in the summer: “Shade your lawn!” Then dial back irrigation water use accordingly.

“Do you know how much water you use to irrigate your lawn?” Litvak says. Many people don’t, including landscape managers she interviewed in her research. Utah water managers recommend two irrigations per week in early and late summer and three irrigations in the hottest months. Each irrigation should deliver half an inch of water, which should take 20-40 minutes, depending on the sprinkler system type.

“A lot of the lawn space we see in people’s yards doesn’t seem to be used for anything other than aesthetics,” Pataki says. “So that is going to cost some water.”

Litvak’s doctoral dissertation work, of which this study is a continuation, results in an upcoming analysis of water use by plants in the entire LA area, including the “urban forest” of trees. The analysis, once completed, will be the first of its kind, a large-scale transpiration measure that can be applied to other urban areas as well.

“If you look out at this landscape in Salt Lake, how much water is coming off of this vegetation?” Pataki says, gesturing at her office window that overlooks the bustling Salt Lake Valley, covered with a canopy of trees. “No one knows.”

This work was funded by the National Science Foundation.