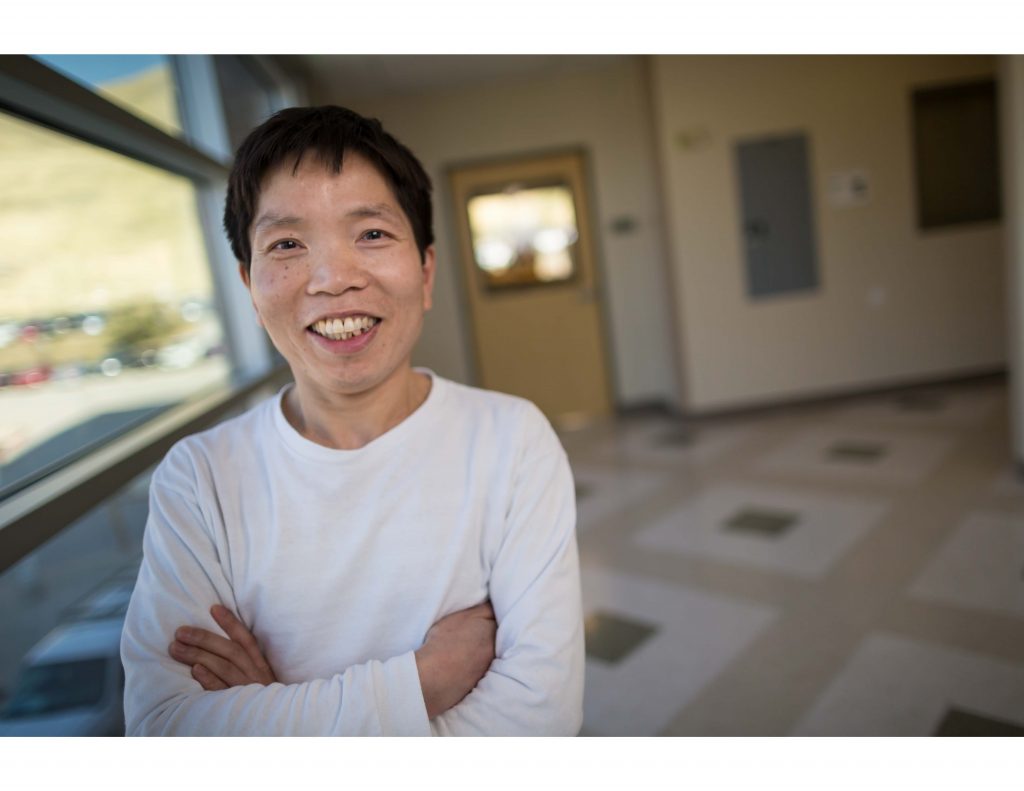 Erhu Cao, assistant professor of biochemistry at University of Utah Health, was named a 2017 Pew Scholar for his exploration of atomic-scale mechanisms to understand how cell membrane proteins function under normal and diseased states.

Cao is one of 22 scientists nationwide to receive the honor from the Pew Charitable Trusts. The Pew Scholars Program in the Biomedical Sciences provides funding to early career investigators of outstanding promise in science that is relevant to the advancement of human health.

Cao’s research lifts the veil that, until recently, prevented scientists from examining the dynamic interactions that occur within the cell. He is using cryo-electron microscopy (cryo-EM) to visualize the structure of these channels housed within the cell membrane at an atom-by-atom scale.

“Dr. Cao is leading the ‘resolution revolution’ of electron microscopy that is transforming our understanding of molecular processes in biology,” said Christopher Hill, co-chair of the Biochemistry Department at University of Utah Health. “His research encompasses structural biology, electrophysiology, and molecular pharmacology that will ultimately inform the development of new therapeutic approaches to combat devastating diseases.”

“ADPKD is mostly an adult-onset disease and most patients don’t realize they have the disease until they reach their 40s,” said Cao.

The kidneys filter waste from blood and balance bodily fluids, but a gene mutation, which causes ADPKD, prevents these important organs from functioning properly. Unable to filter waste effectively, patients often experience high blood pressure, and cysts progressively form in the kidneys, causing them to enlarge and fail. After a diagnosis, there is not much that can be done.

“We are limited to managing the symptoms rather than the disease,” Cao said. Because few therapies are available, half of the patients require dialysis or kidney transplantation to filter the waste from their blood.

ADPKD is caused by mutations on two genes (PKD1 and PKD2) that code for polycystin proteins that reside in the cell membrane of kidney cells. The proteins are ion channels that act as a gateway to transmit ions into and out of the cell. “I have always been interested in ion channels and receptors,” said Cao. “They sit along the cell membrane and sense the external environment and transmit signals into the cell to elicit the proper response.”

Mutations on ion channels can cause a variety of human diseases, and many drugs work through ion channels.

Cao’s research has focused on characterizing the structures of the PKD2 protein at the atomic level. Using the cryo-EM, he was able to collect multiple two-dimensional images of this protein to reconstruct a 3D model of PKD2 for understanding how it functions. He is using this information as a starting point for molecular pharmacology. At the moment, few pharmacological reagents are available to study the PKD proteins. “I am hoping to identify reagents to help my basic research, but these reagents could also evolve into therapeutic drugs,” said Cao.

“I believe that Dr. Cao is on a trajectory to be a leading innovator in structural and chemical biology,” Hill said. “This award will allow him to continue to grow as one of the leading scientists of his generation.”

As a Pew Scholar, Cao will attend yearly meetings to engage with other Pew scholars to explore new research opportunities and join the community of research scientists. “I am really excited about the chance to meet my peers and work with scientists from different backgrounds to apply new techniques to my area of study,” Cao said.

“Pew is proud to support these investigators as they use novel approaches to illuminate the mechanisms of human biology and disease,” said Rebecca W. Rimel, president and CEO of The Pew Charitable Trusts. “This impressive group has demonstrated the curiosity and courage that drive great scientific advances, and we are excited to help them fulfill their potential.”