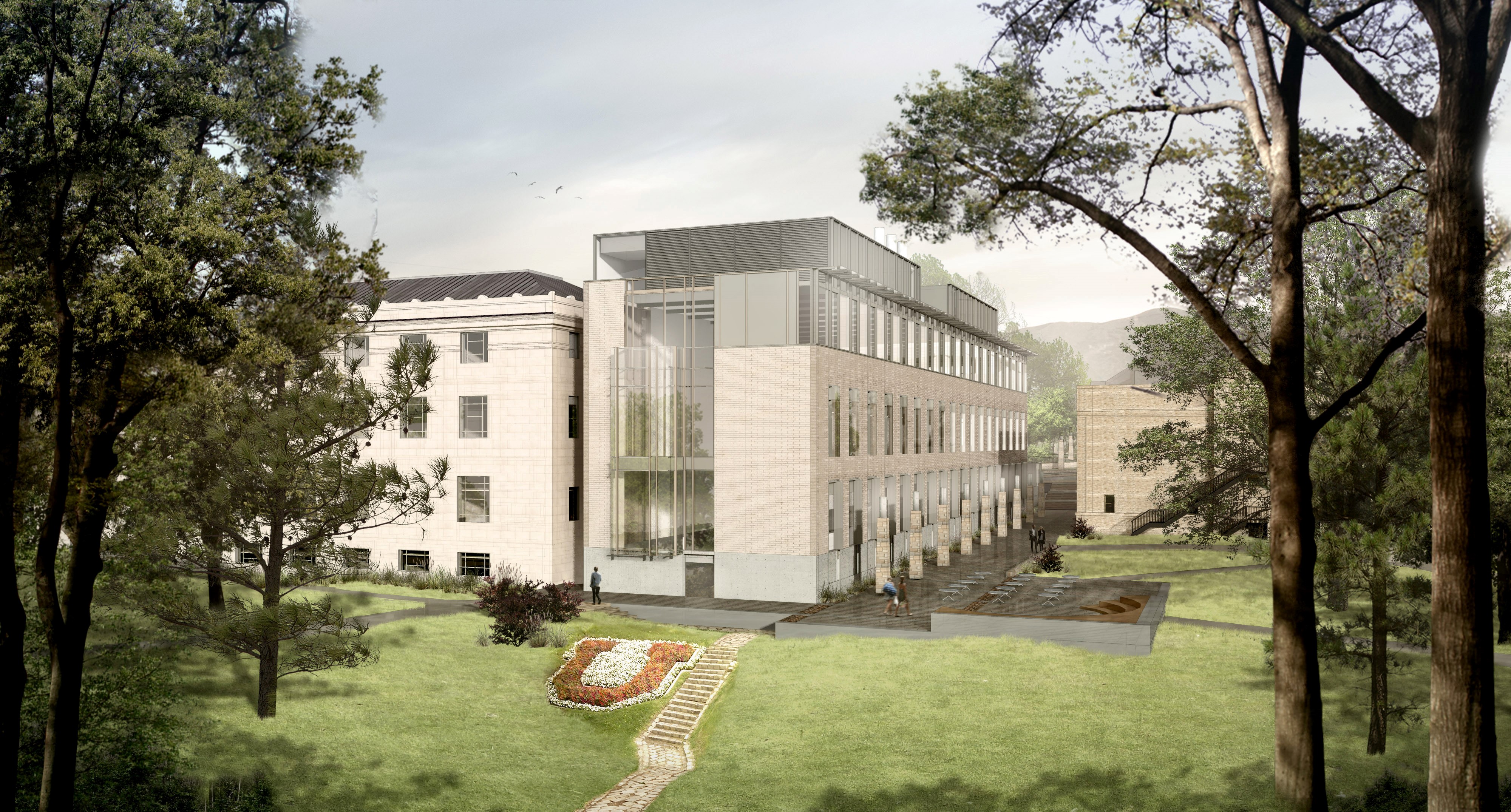 SALT LAKE CITY —University of Utah President David W. Pershing and College of Science Dean Henry S. White hosted a groundbreaking ceremony to commence construction of the Gary and Ann Crocker Science Center at the George Thomas Building on Presidents Circle. The Crocker Science Center will house the Center for Cell and Genome Science, the Center for Science and Math Education, modern classrooms and laboratories for interdisciplinary science and math education and a technology-incubator space.

“We hope this new center will make a profound difference in the lives and careers of students at the university by driving interest in the critical interdisciplinary scientific innovation that generate science breakthroughs and economic growth,” said Gary Crocker. “Science is the foundation for so many different facets of modern life, and this Center will provide thousands of students each year with the science and math skills so essential for personal and economic success in the 21st Century.”

Gary and Ann Crocker provided a personal lead gift of $10 million toward the $55 million project that is expected to be completed in fall 2017.

In addition to the Crocker gift, the project received $34 million from the state, as well as donations from other benefactors, including Kirk Ririe and Mary Jane O’Connor-Ririe, Harris Simmons and Amanda Pahnke Simmons, Dinesh and Kalpana Patel, the Church of Jesus Christ of Latter-day Saints, the Sorenson Legacy Foundation, ARUP Laboratories, the George S. and Dolores Doré Eccles Foundation, the Lawrence T. & Janet T. Dee Foundation, The Semnani Family Foundation, Orbital ATK, Grandeur Peak Global Advisors, Zions Bank, and numerous other friends of the College of Science.

The Crocker Science Center will have three main purposes: research, education and commerce. The research component will draw on faculty from all four departments in the college (biology, chemistry, mathematics and physics and astronomy) to study the basic machinery of living cells. The educational component will provide undergraduate students abundant laboratory opportunities, smaller classrooms and regular interaction with faculty. A commercial “incubator” will bring scientists in the college together with those in the industry to develop ideas with commercial potential.

“The University of Utah is one of the world’s great centers for science and technology,” said White. “This new center will be a welcoming place for student-faculty interaction and collaboration. We’re excited to give our students ample opportunities to learn, perform cutting-edge research and potentially produce intellectual property.”

In the construction process, the historic George Thomas Building, which was the original Utah Museum of Natural History, will be renovated and expanded into a state-of-the-art center for scientific research and teaching. The extensive project will retain the structure’s facade and many notable architectural elements, such as the grand central stairway and vaulted reading room. The building will also undergo a comprehensive seismic upgrade.

“The George Thomas Building is a long-standing centerpiece of the University of Utah,” said Pershing. “While the architectural integrity of this historic building is being maintained, the Crocker Science Center will transform it into a modern hub for instruction and innovation. We’re beyond grateful to the Crockers and other donors for their considerable generosity.”

Gary Crocker has been recognized locally and nationally for his successful business pursuits in life sciences. The Crockers’ donation stems from proceeds of four science-based companies in which Gary Crocker has either been a founder and operator or early investor and principal. His career extends to all facets of the life science industry, including developing groundbreaking medical devices, diagnostics and pharmaceuticals. Crocker founded Research Medical in Midvale in 1983 and built it into the world’s largest manufacturer of open-heart surgery catheters. He was CEO of Research Medical for 14 years, guided the company as it went public, and sold it to Baxter’s Edwards Laboratories division in 1997 for $235 million.

Later, with three colleagues at Research Park, Gary Crocker founded Theratech and produced industry leading transdermal drug patches for hormone delivery, an enterprise that eventually sold for $340 million. His Crocker Ventures fund was an early investor in Boston-based Interleukin Genetics, a personalized medicine diagnostics company, and he served for several years as founding director. He was also chairman of a Utah-based diagnostic reference firm ARUP Laboratories for five years.

Most recently during the past 12 years, Gary Crocker has served as chairman of the board of Merrimack Pharmaceuticals, a publicly traded cancer therapy drug firm in Boston recognized as one of the top five oncology biotechnology companies in the United States. Merrimack recently received final FDA approval for a novel pancreatic cancer drug.