The town of Escalante in southern Utah is no small potatoes when it comes to scientific discovery; a new archaeological finding within its borders may rewrite the story of tuber domestication.

Researchers from the Natural History Museum of Utah and Red Butte Garden at the University of Utah have discovered potato starch residues in the crevices of a 10,900-year-old stone tool in Escalante, Utah — the earliest evidence of wild potato use in North America. This is the first archaeological study to identify a spud-bearing species native to the southwestern United States, Solanum jamesii, as an important part of ancient human diets. The researchers pieced together evidence from stone tools, ethnographic literature and modern gardeners to show that Utahans have used the species intermittently for over 10,000 years. The Escalante area was even previously known as “Potato Valley” to early settlers. 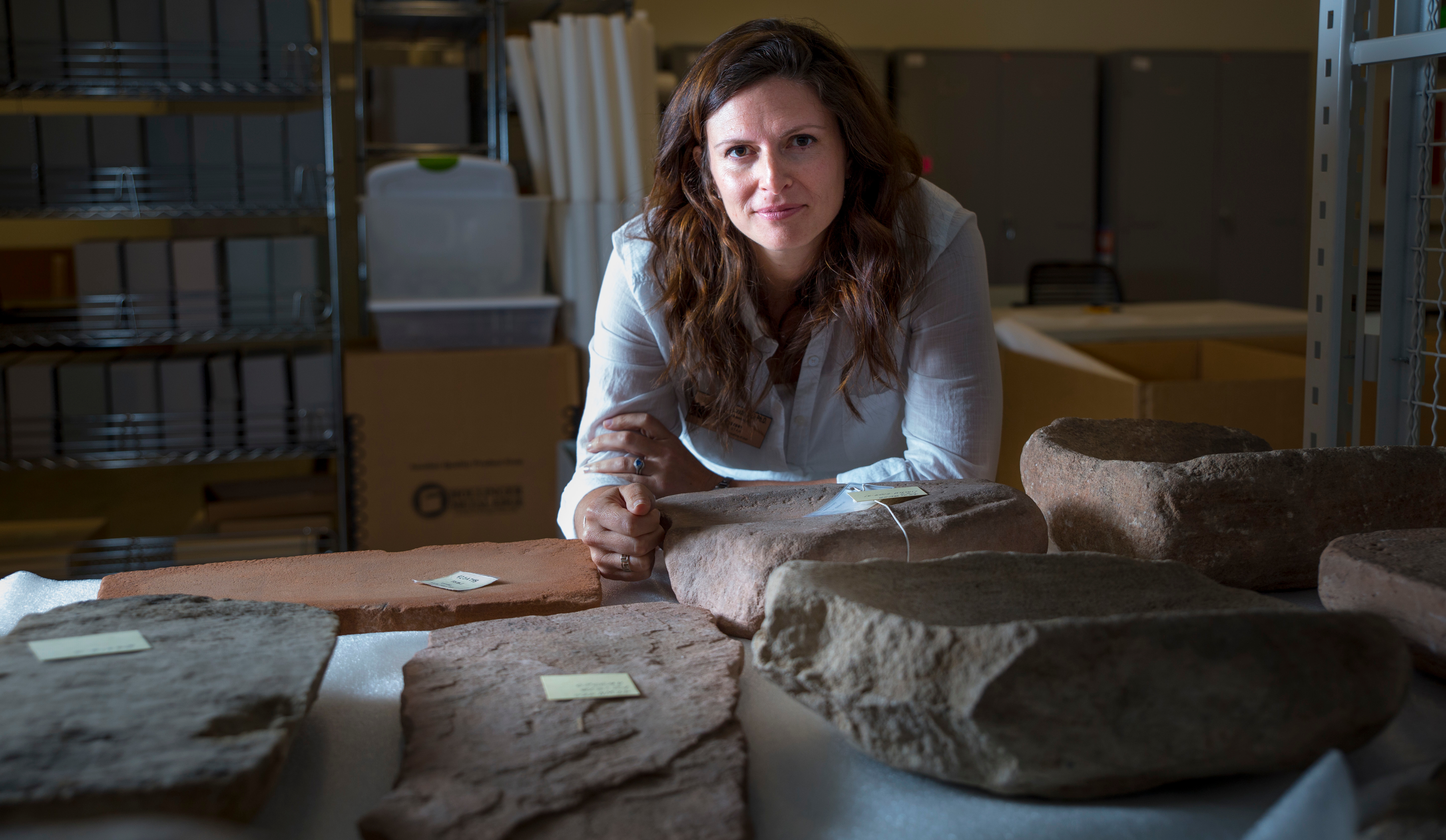 Lisbeth Louderback, assistant professor of anthropology and curator of archaeology at the Natural History Museum of Utah, stands behind large stone metates, the grindstones on which ancient Native Americans processed their food.

The long history could mean that the species was transported, cultivated or even domesticated. If true, S. jamesii would be the first example of a plant domesticated in the western U.S. To find out, the researchers are collaborating with geneticists from the United States Department of Agriculture, who are mining S. jamesii’s DNA for genes resistant to drought and disease that could help diversify current potato crops to be more resilient.

“This potato could be just as important as those we eat today not only in terms of a food plant from the past, but as a potential food source for the future,” says Lisbeth Louderback, senior author of the study that published online July 3 in the Proceedings of the National Academy of Sciences. “The potato has become a forgotten part of Escalante’s history. Our work is to help rediscover this heritage.” Louderback is an assistant professor of anthropology at the U and curator of archeology at the Natural History Museum of Utah.

The potatoes we buy at the grocery store are all varieties of a single species, Solanum tuberosum, that was domesticated in the South American Andes more than 7,000 years ago. Since then, S. tuberosum has diversified into the reds, russets and thousands of other potato types for sale in markets around the world.

Louderback holds the tiny tubers of S. Jamesii, the Four Corners potato. U researchers discovered the spud’s starch residues in the crevices of a 10,900-year-old stone tool in Escalante, Utah — the earliest evidence of wild potato use in North America.

The new study deals with S. jamesii, a wild species found in the shady shelter of oaks, sagebrush and piñon pines across the Four Corners region of the southwestern U.S. The so-called Four Corners potato is most abundant in the highlands of New Mexico, where its green leaves and delicate white flowers are scattered throughout piñon-juniper woodlands. In Utah, however, the plants only grow in sparse, isolated populations near archaeological sites, suggesting that ancient people carried the tubers to the area.  Only five small populations of plants are known in the Escalante Valley, including one just 150 meters from the archaeological site, North Creek Shelter. Though rarely used today, the potato was an important staple for people living across its range.

“The use of Solanum jamesii by the Hopi people is not so much now, but in the past as the famers would be out in their fields down below the mesas they would dig the wild potatoes and bring it home to add to their diet,” says Max Taylor, botanist at the Hopi Tribe Water Resources Program. “There were many ways to prepare the potatoes, but one way for sure was to boil the potatoes in a white clay to draw out the toxins from the potato to make it edible. Tñhe particular clay is called the potato clay for that reason, it’s a clay similar to the one from which the potteries are made.”

The researchers have enlisted the Escalante community to help conserve the plants and preserve their cultural heritage.

“It’s hard to persuade the general public to care about rare plants. But this one has a real history associated with native people, with pioneers, with folks living though the depression and with the residents in Escalante today,” says Bruce Pavlik, director of conservation at Red Butte Garden and co-author of the study. “Across the range, it should be treated as an antiquity, in a sense.”

Louderback analyzed stone tools from North Creek Shelter in the Escalante Valley, one of Utah’s oldest archaeological sites with an 11,000-year history. Its residents were mostly hunters and gatherers until the Fremont and Ancestral Puebloan cultures arrived and began cultivating crops. Today, the Southern Paiute inhabit this region along with descendants of Mormon settlers. 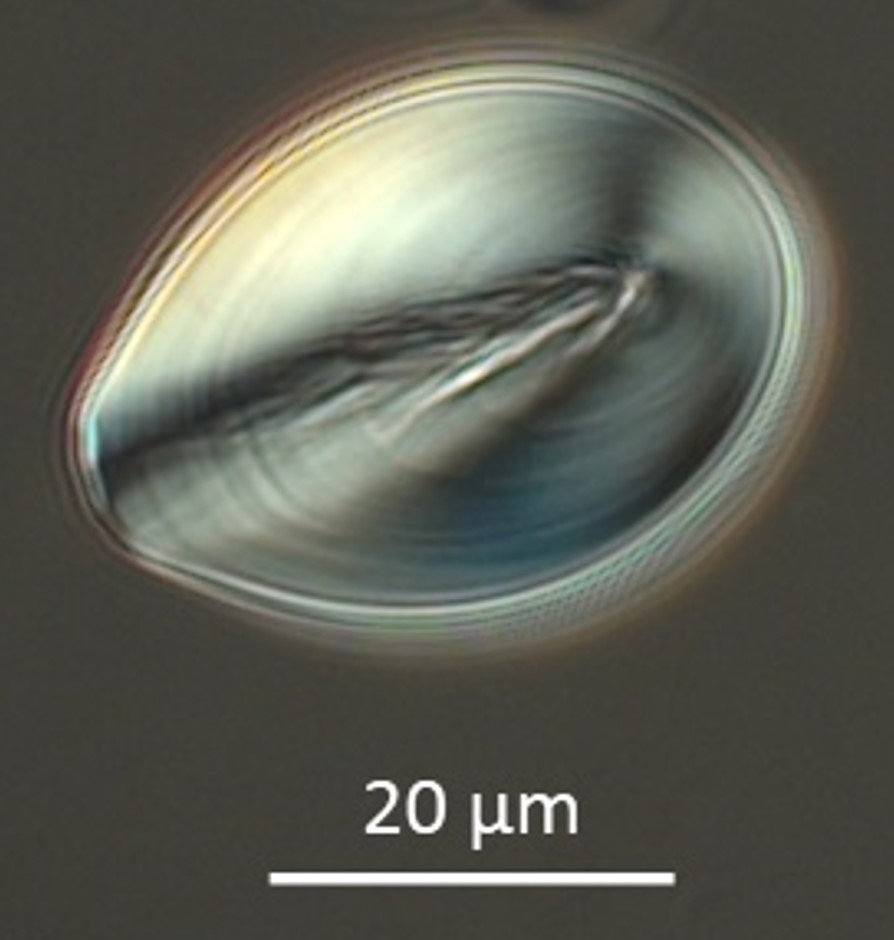 A microscopic starch granules from the Four Corners potato.

Archaeologists use mathematical models derived from foraging theory to describe how and why people foraged for food resources. Using what is called the diet breadth model, archaeologists rank dietary animals and plants according to their energy content and the effort required to harvest and process the food. The discovery of S. jamesii consumption adds a new energy source that has been largely ignored in ancient diets, partly because tubers don’t preserve well in archaeological deposits. Unlike animal bones and corn cobs, tubers are composed of soft tissues that disintegrate easily. Yet they pack a caloric punch, and are important for understanding ancient peoples’ way of life.

“Grinding plant tissues with manos and metates releases granules that get lodged in the tiny cracks of stone, preserving them for thousands of years. Archaeologists can retrieve them using chemicals, modern microscopy and advanced imaging techniques,” says Louderback. 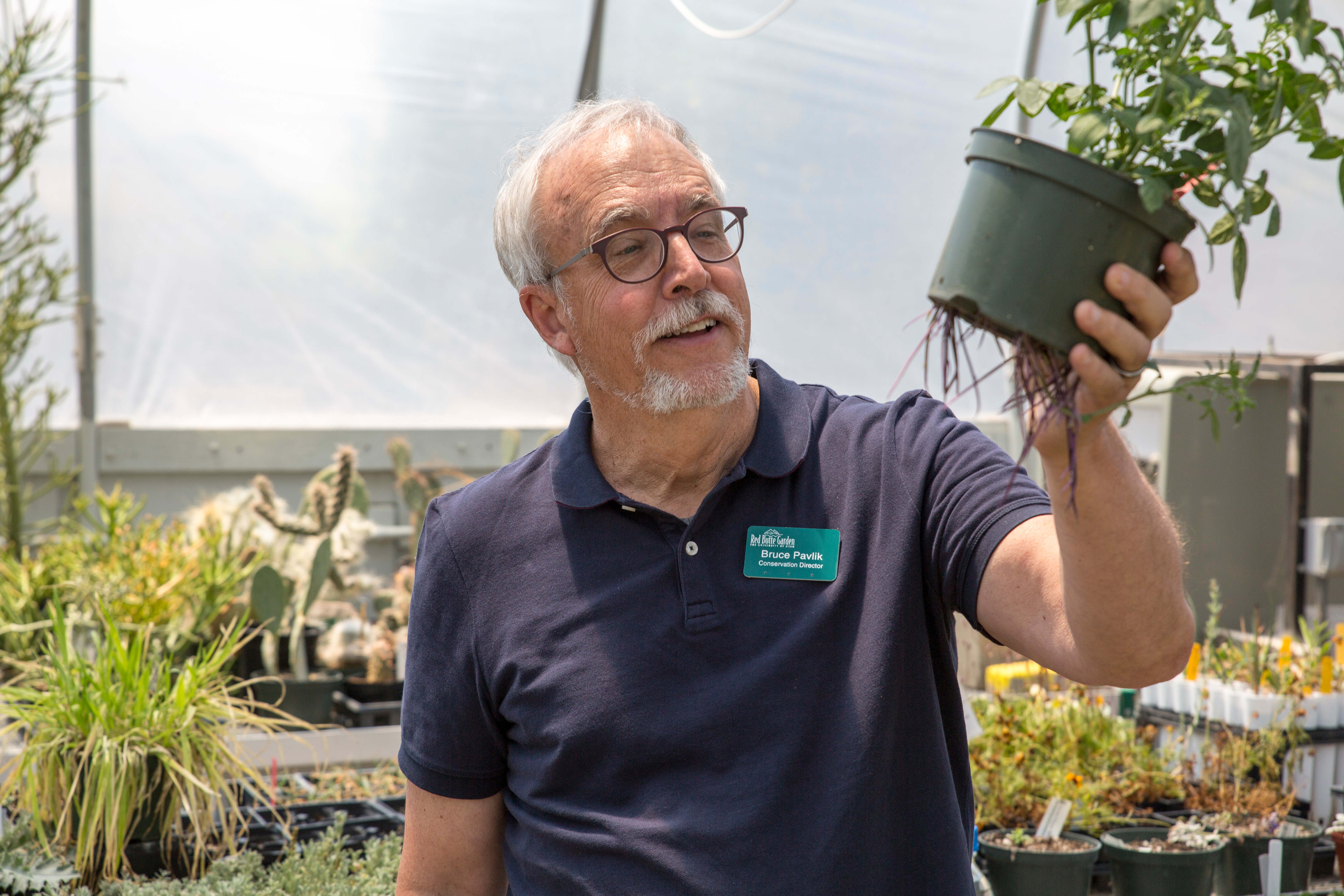 Pavlik is studying the mysterious ecology of S. jamesii in the hopes of enlisting Utahns to plant the rare potato in their gardens.

All starch granules have concentric circles that grow outward like tree rings. The origin of growth begins with what’s called the hilum. The majority of plant species have starch granules with hila at the center of the grain. However, the hila of granules filling Louderback’s microscope slides were off-center. Only a few species from the Four Corners region produce starch granules with that specific characteristic; S. jamesii is one of them.

She and NHMU postdoctoral research associate Nicole Herzog, now a lecturer at Boise State University, analyzed granules from modern-day S. jamesii to establish a set of five characteristics that accurately identified the wild potato, starting with the off-center hilum. Starch granules with five out of five characteristics were a verified wild potato. They analyzed tubers from three different modern populations, 100 granules per tuber.

Louderback and Pavlik checked for the characteristics on granules found on the ancient stone tools from North Creek Shelter. Out of the 323 total starch granules, 122 had the off-center hilum. Of those, nine were verified S. jamesii and another 61 were either likely or possibly S. jamesii. 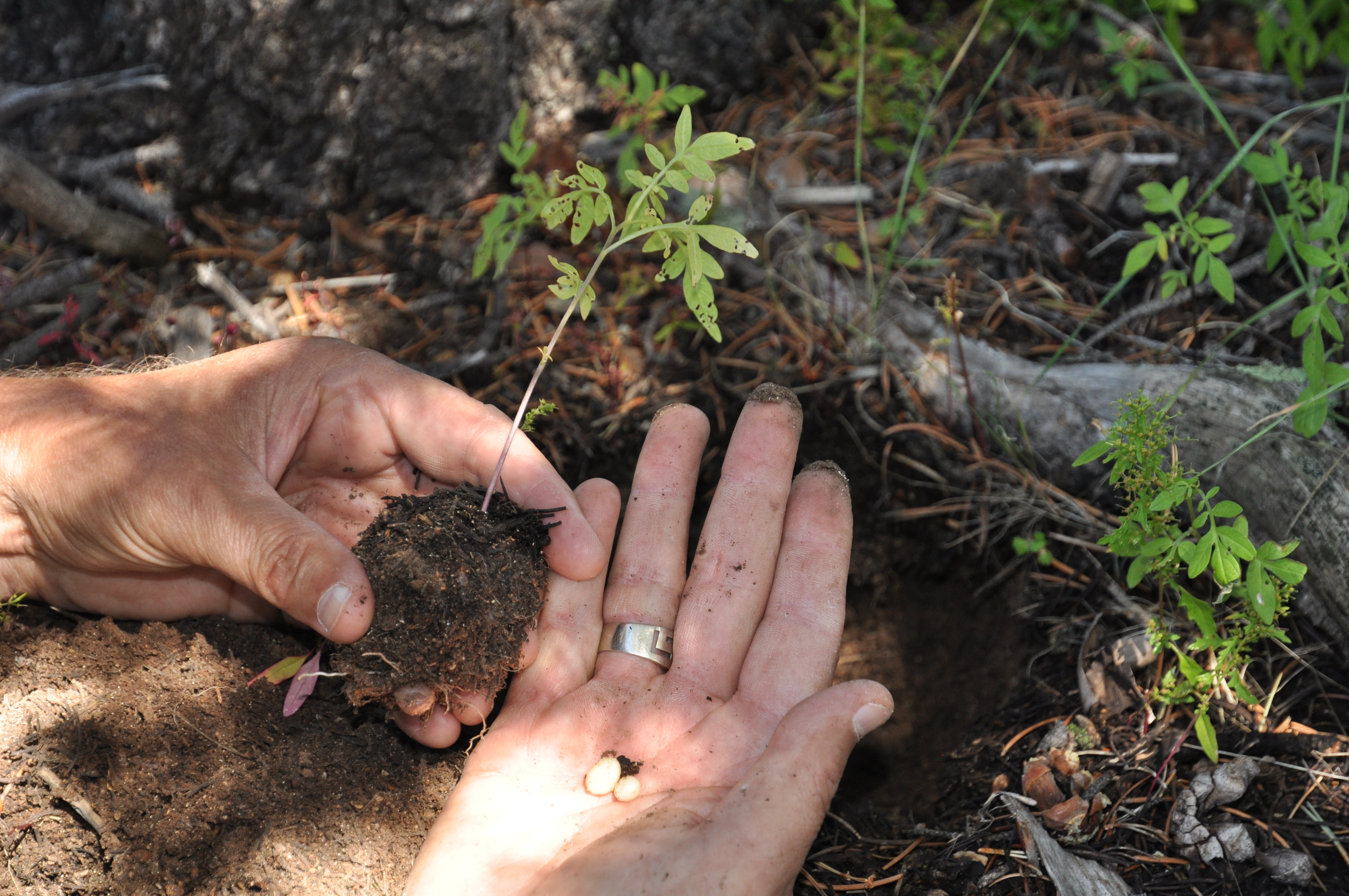 The future of the Four Corners potato

The researchers are collaborating with colleagues from the USDA Potato Genebank, who have studied the genetics of S. jamesii since the 1990s. Future efforts will focus on understanding patterns of genetic diversity across the Four Corners region to look for clues about whether it was transported, manipulated or even domesticated.

The researchers want to make the potatoes available for the Escalante community to grow in their gardens to help with conservation. But first, they need to untangle the mysterious ecology of the potato in the wild — its pollinators and conditions necessary for sexual reproduction are still unknown.

“We are working with the people of Escalante to bring awareness to this valuable resource and show them what the species looks like, where it grows, its tremendous history and enlist their help as stewards of the Four Corners potato,” says Pavlik.

This work was funded by the National Science Foundation and the Vice President for Research Funding Incentive Seed Grant Program at University of Utah.