in a big way

The BIG LoVE (Utah Better Identification of Germs-Longitudinal Viral Epidemiology) study, led by scientists at the University of Utah School of Medicine, finds that each bundle of joy puts the entire household at increased risk for infection with viruses that cause colds, flu, and other respiratory illnesses.

People living in childless households were infected with viruses on average 3-4 weeks during the year. In households with one child, that number jumped to 18 weeks, and for those with six children, there was virus in the household for up to 45 weeks out of the year.

Yet on average only half of those who tested positive for viral infection also had the typical symptoms of coughing, fever, and stuffy nose, an informative finding for both families and their health care providers. The results were published in the journal, Clinical Infectious Diseases.

Kids Fill Hearts With Love, And Homes With Illness
When it comes to explaining why big families have more illnesses, all signs point to young kids as the culprits. Tots younger than five had at least one virus detected in their nasal mucus for 50 percent of the year: twice as often as older children and adults. And when infected, they were 1.5 times more likely to have symptoms, including severe ones like wheezing and fever.

Adding even more stress to a household, young kids didn’t suffer alone. Their parents were sick 1.5 times more frequently than similarly aged adults who did not live with young kids.

When it comes to explaining why big families are prone to illness, signs point to young kids as the culprits. Children younger than five were infected with respiratory virus for 50 percent of the year: twice as often as older children and adults. When infected, they were 1.5 times more likely to have symptoms, including severe symptoms like wheezing and fever.

“A lot of families go through wave after wave of illness. In fact, some of the kids we monitored had symptoms for 20 to 25 weeks in a row,” says co-first author Carrie Byington, M.D., professor of pediatrics and co-director of the Utah Center for Clinical and Translational Science. “This study helps us to understand what is normal in young children, and can help us determine when illness should be a cause for concern.” 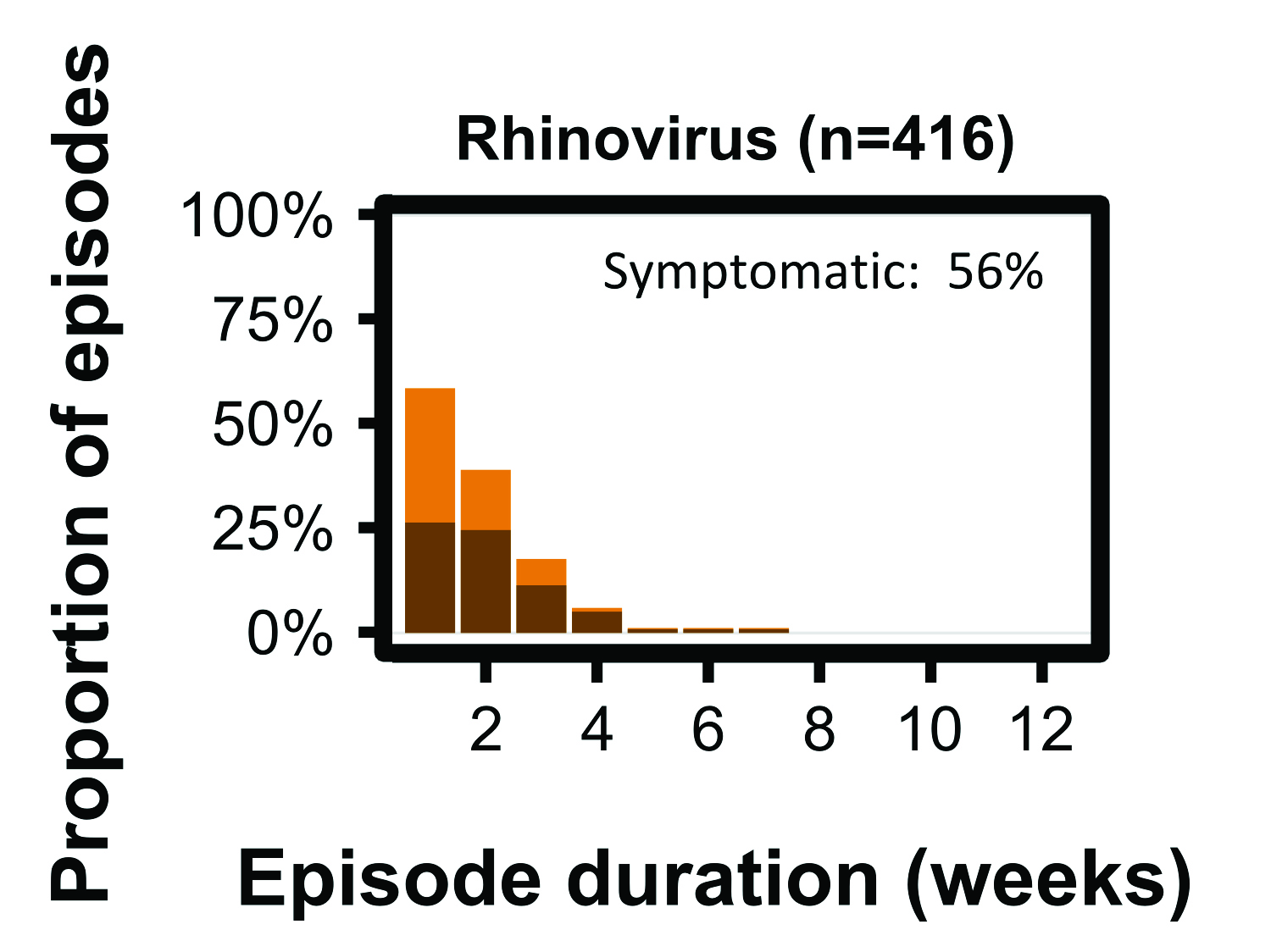 PCR-based diagnostics are becoming increasingly common in clinics, but the BIG-LoVE study shows that on average, half of patients who tested positive for respiratory virus did not show any symptoms. The study tested 16 kinds of respiratory virus in all. Among study participants that tested positive for rhinovirus, the virus was found to persist for up to 7 weeks, but participants only showed symptoms (ie. coughing, fever) 56 percent of the time. Darker shading indicates symptomatic viral detection and lighter shading indicates asymptomatic viral detection.

It’s no secret that children get sick a lot. But BIG LoVE – a year-long survey of a Utah community – is one of the first to use modern diagnostics to track how often kids and other family members, both sick and well, have nasal infections of respiratory virus. Future studies will determine if reported trends hold true in larger and diverse populations.

A Positive Test May Not Mean Positively Sick

Perhaps the most surprising finding was how often participants carried virus, and showed no signs of being sick.

PCR-based diagnostics, like those used to test participants’ samples in this study, are becoming increasingly common in clinical settings because they are much more sensitive and accurate than older tests, and provide results within hours, not days. Yet these findings suggest that some test results should be interpreted with caution.