On July 22, 1847, a scouting party from The Church of Jesus Christ of Latter-day Saints stood above the Great Salt Lake Valley in modern-day Utah; by 1870, more than 18,000 followers had colonized the valley and surrounding region, displacing Native American populations to establish dispersed farming communities. While historians continue to debate the drivers of this colonization event, a new study from the University of Utah proposes that agricultural productivity drove dispersal patterns in a process that led the current distribution of Utah populations today.

Utah anthropologists adapted a well-known ecological model, and tested its predictions by combining satellite-derived measures of agricultural suitability with historical census data. They found that the model accurately predicted the patterns in which settlement occurred in Utah, as well as the present-day distribution of people.

“People are going to go where they can do the best for themselves and their families. For these early settlers, they’re going to settle where the agriculture is best,” said Peter Yaworsky, lead author and doctoral student in the Department of Anthropology at the University of Utah.

The study published on Nov. 3, 2017 in the journal American Antiquity.

Settle the best place first, and most often 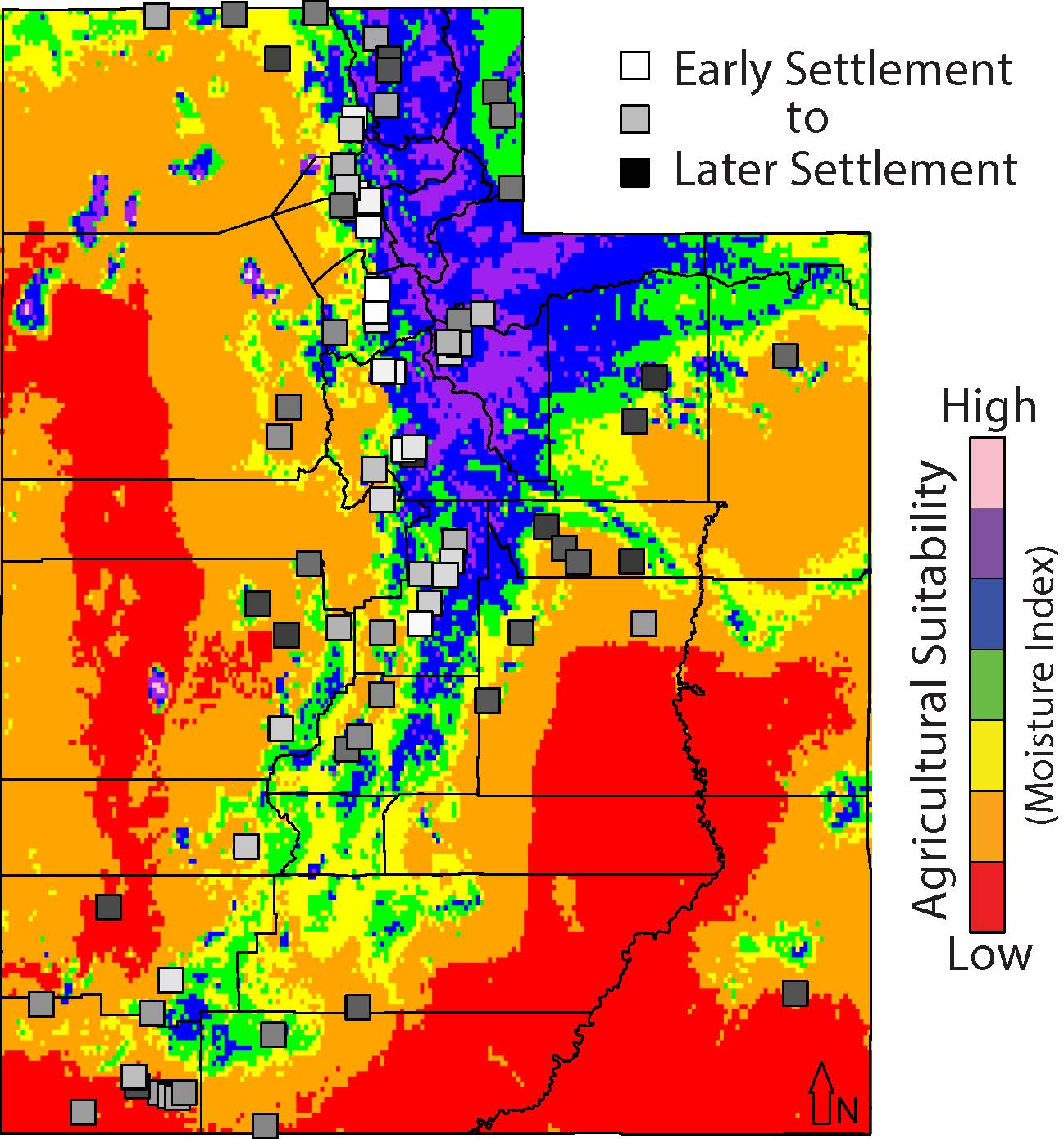 The researchers are the first to apply a model from population ecology to explain historical settlement data from the 19th and 20th centuries. Ecologists originally developed the model to study distribution patterns of wildlife populations. Anthropologists have since adopted it as a way to understand the decisions that individuals make when distributing themselves across a new area.

“We thought that we could use these same hypotheses, this same model, the same predictions, to talk about this colonization event, as well as others worldwide,” said Yaworsky.

The paper shows that as Euro-Americans settled across Utah, they chose areas most suited for agriculture to make the best living possible for themselves and their families. As new families moved in and increased competition for water and land, the agricultural suitability of the region declined. As more newcomers arrived, they chose to settle in the area with the next-best agricultural potential, and so on.

“I was surprised how well it worked,” said senior author Brian Codding, associate professor in the Department of Anthropology and director of the U’s Archaeological Center. “I hope more anthropologists and historians will start to look at other historical events like this and try to explain these types of settler-colonial events in ecological terms.”

Not only do these results help explain the past, but they illustrate why populations are distributed across the state the way they are today.

“From the model, we predicted that the best places should always have the most people,” Yaworsky said. “This is why we see major cities on the Wasatch Front.”

By settling the state to maximize agricultural productivity, early settlers set a process into motion that impacts us today.

“Where Utahns live today reflects the historical inertia of those early decisions, in addition to the distribution of resources that remain important today, like water,” Codding said. 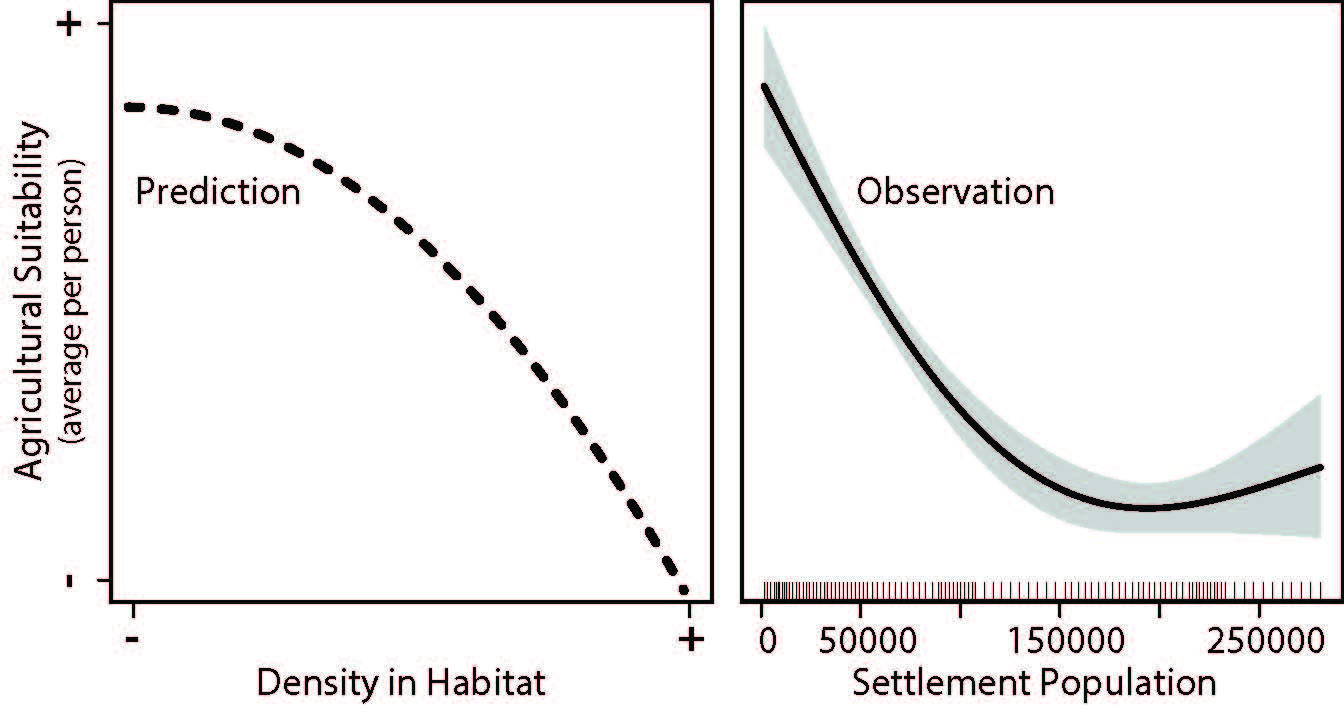 The model predicts that as more Euro-American families settled an area, the agricultural quality declines (left). Newcomers then choose to settle in the next-best quality area. The observed patterns largely fit this prediction, but researchers were surprised that settlers moved into poorer-quality habitats more rapidly than you would expect (right).

The researchers randomly selected 84 settlements of the 347 established between 1847 and 1950 across Utah, and tracked the population changes over time using extensive historical records and census data. Yaworsky then developed two measures of agricultural suitability from satellite and soils data compiled over the past 17 years. By utilizing Utah’s historical records, the U researchers got the best of both worlds — detailed data over a time scale long enough to see patterns emerge.

The model accurately predicted the order of settlements in Utah, with one surprise. “Settlers dispersed into poorer-quality habitats more rapidly than you’d expect,” Yaworsky said.

One explanation could be that the early settlers were directed by the Mormon leader Brigham Young, who also sought to occupy as much land as possible in order to establish a Mormon state. To accomplish this, he may have directed families to settle in areas of poorer agricultural quality before it was absolutely necessary.

If this is true, then founding the beehive state may have required some settlers to sacrifice their agricultural production. However, “overall, we still see that people were doing the best they could for themselves and their families,” Codding said.

Men at work threshing wheat with a steam engine and separator in Hinckley, Millard Country in Utah in the late 1800’s or early 1900’s. The owner of the outfit, William Brown Alldredge, a Utah Pioneer of 1867, is the man second from the engine on the right.

A new tool to study migration

Validation of this tried and true ecological model with the use of historic human settlement gives Yaworsky and Codding hope that future studies will apply the model to better understand global colonization and migration events in the past, and those occurring today.

“Our study demonstrates that you can use these models to talk about colonization events worldwide. We can look for ecological or economical explanations for settlement not only in the past, but also in the present,” said Yaworsky.