In 1870, explorer Adolf Erik Nordenskiöld, trekking across the barren and remote ice cap of Greenland, saw something most people wouldn’t expect in such an empty, inhospitable landscape: haze.

Nordenskiöld’s record of the haze was among the first evidence that air pollution around the northern hemisphere can travel toward the pole and degrade air quality in the Arctic. Now, a study from University of Utah atmospheric scientist Tim Garrett and colleagues finds that the air in the Arctic is extraordinarily sensitive to air pollution, and that particulate matter may spur Arctic cloud formation. These clouds, Garrett writes, can act as a blanket, further warming an already-changing Arctic.

“The Arctic climate is delicate, just as the ecosystems present there,” Garrett says. “The clouds are right at the edge of their existence and they have a big impact on local climate. It looks like clouds there are especially sensitive to air pollution.” The study is published in Geophysical Research Letters. 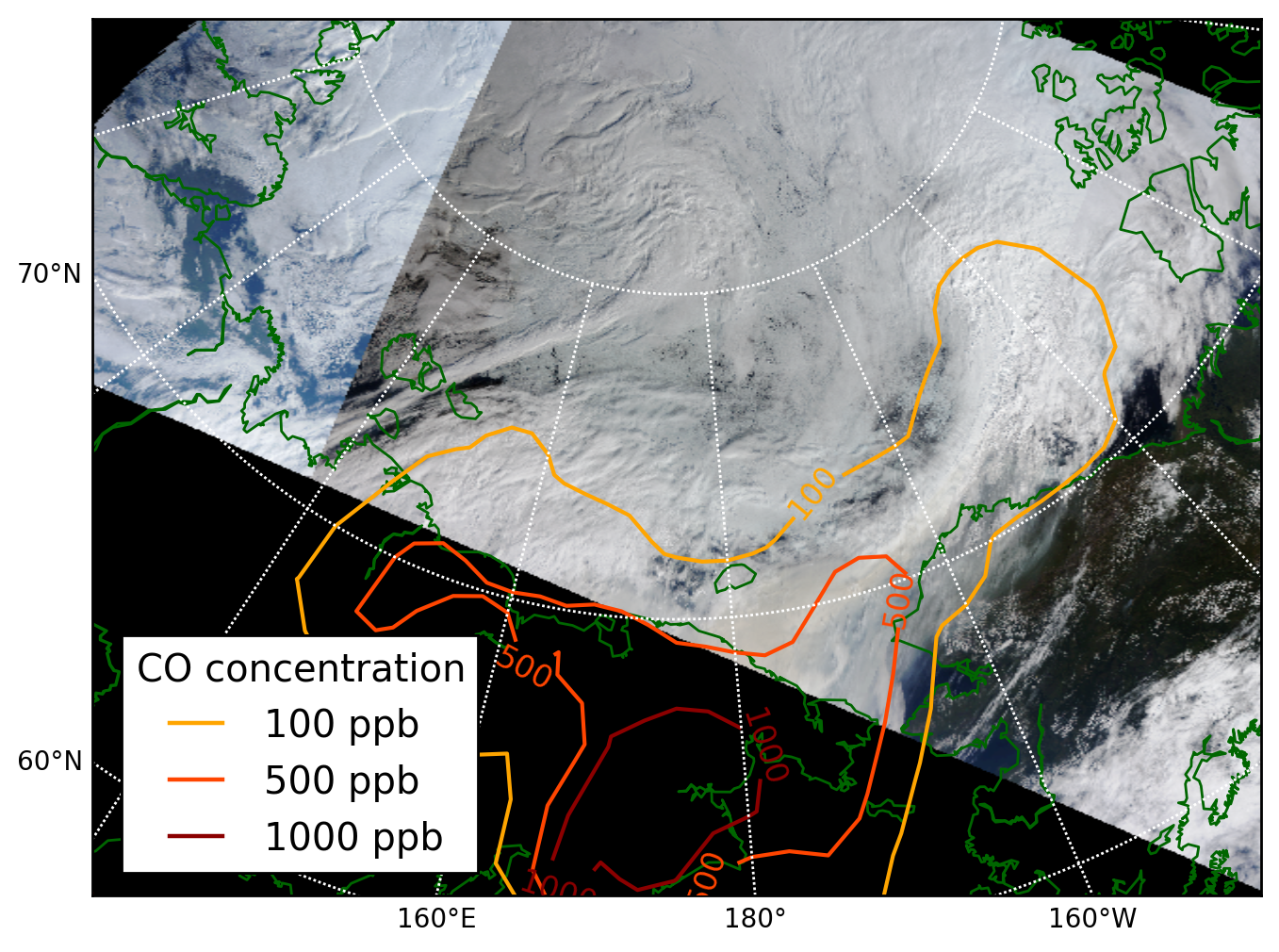 A rare case of forest fire smoke interacting with clouds in the Arctic in July 2012. Contour lines indicate carbon monoxide concentrations in the atmosphere.

Garrett says that early Arctic explorers’ notes show that air pollution has been traveling northward for nearly 150 years or more. “This pollution would naturally get blown northward because that’s the dominant circulation pattern to move from lower latitudes toward the poles,” he says. Once in the Arctic, the pollution becomes trapped under a temperature inversion, much like the inversions that Salt Lake City experiences every winter. In an inversion, a cap of warm air sits over a pool of cold air, preventing the accumulated bad air from escaping.

Others have studied which regions contribute to Arctic pollution. Northeast Asia is a significant contributor. So are sources in the far north of Europe. “They have far more direct access to the Arctic,” Garrett says. “Pollution sources there don’t get diluted throughout the atmosphere.”

Scientists have been interested in the effects of pollution on Arctic clouds because of their potential warming effect. In other parts of the world, clouds can cool the surface because their white color reflects solar energy back out into space. “In the Arctic, the cooling effect isn’t as large because the sea-ice at the surface is already bright,” Garrett says. “Just as clouds reflect radiation efficiently, they also absorb radiation efficiently and re-emit that energy back to warm the surface.” Droplets of water can form around particulate matter in the air. More particles make for more droplets, which makes for a cloud that warms the surface more.

Seeing through the clouds

But quantifying the relationship between air pollution and clouds has been difficult. Scientists can only sample air pollution in clouds by flying through them, a method that can’t cover much ground or a long time period. Satellite images can detect aerosol pollution in the air – but not through clouds. “We’ll look at the clouds at one place and hope that the aerosols nearby are representative of the aerosols where the cloud is,” says Garrett. “They’re not going to be. The cloud is there because it’s in a different meteorological air mass than where the clear sky is.”

So Garrett and his colleagues, including U graduate Quentin Coopman, needed a different approach. Atmospheric models, it turns out, do a good job of tracking the movements of air pollution around the Earth. Using global inventories of pollution sources, they simulate air pollution plumes so that satellites can observe what happens when these modeled plumes interact with Arctic clouds. The model allowed the researchers to study air pollution and clouds at the same time and place and also take into account the meteorological conditions. They could be sure the effects they were seeing weren’t just natural meteorological variations in normal cloud-forming conditions.

The research team found that clouds in the Arctic were two to eight times more sensitive to air pollution than clouds at other latitudes. They don’t know for sure why yet, but hypothesize it may have to do with the stillness of the Arctic air mass. Without the air turbulence seen at mid-latitudes, the Arctic air can be easily perturbed by airborne particulates.

One factor the clouds were not sensitive to, however, was smoke from forest fires. “It’s not that forest fires don’t have the potential,” Garrett says, “it’s just that the plumes from these fires didn’t end up in the same place as clouds.” Air pollution attributable to human activities outpaced the influence of forest fires on Arctic clouds by a factor of around 100:1.

This gives Garrett hope. Particulate matter is an airborne pollutant that can be controlled relatively easily, compared to pollutants like carbon dioxide. Controlling current particulate matter sources could ease pollution in the Arctic, decrease cloud cover, and slow down warming. All of those gains could be offset, other researchers have suggested, if the Arctic becomes a shipping route and sees industrialization and development. Emissions from those activities could have a disproportionate effect on Arctic clouds compared to emissions from other parts of the world, Garrett says.

“The Arctic is changing incredibly rapidly,” he says. “Much more rapidly than the rest of the world, which is changing rapidly enough.”

The full study can be found here. Quentin Coopman of the Karlsruhe Institute of Technology was the first author. D. P. Finch and Jérôme Riedi were additional co-authors. The study was funded by the National Science Foundation, a NERC studentship, the Pollution in the ARCtic System (PARCS) project and Universite de Lille.