Many mammals and birds are remarkable athletes; mice work hard to dig burrows for protection and sparrows fight gravity with each flap of their wings. In order to have the energy to sustain vigorous exercise, the body’s tissues need a steady supply of oxygen, and red blood cells (RBCs) are the center of the oxygen delivery system. Size matters, too; athletic mammals and birds have much smaller RBCs than other vertebrates with lesser capacities for exercise. Biologists have long been puzzled over the evolutionary origins of RBC size. Were predecessors of mammals and birds—including dinosaurs—athletes and did they have tiny red blood cells? How do you measure the blood of extinct animals?

Now, biologists at the University of Utah and the Natural History Museum of Utah have established a ‘fossilizable’ indicator of athleticism in the bones of extinct vertebrates.

The study, which published online in Current Biology on Dec. 22, is the first to draw a link between RBC size and the microscopic traces of blood vessels and bone cells inside the bone. The researchers measured the bony channels that deliver oxygen to bone tissue to pinpoint when our mammal ancestors, bird and dinosaur predecessors evolved small RBCs. They found that extinct mammal relatives, or cynodonts, and extinct bird relatives had smaller RBCs and were likely better athletes than earlier terrestrial vertebrates. The timing of RBC-size reduction coincided with the greatest mass extinction event on Earth 252 million years ago, an event that paved the way for the age of the dinosaurs.

“Some people look at fossils, and they see rocks—but these were living and breathing organisms. To be able to find proxies that tell us something like this, it gets us to think about living organisms in their environments,” says lead author Adam Huttenlocker of the Keck School of Medicine at the University of Southern California, who completed the research as a postdoctoral fellow at the U and the museum. “It allows us to think about the overall implications for mass extinction. What were some of the physiological innovations that allowed them to be successful? That’s really exciting.” 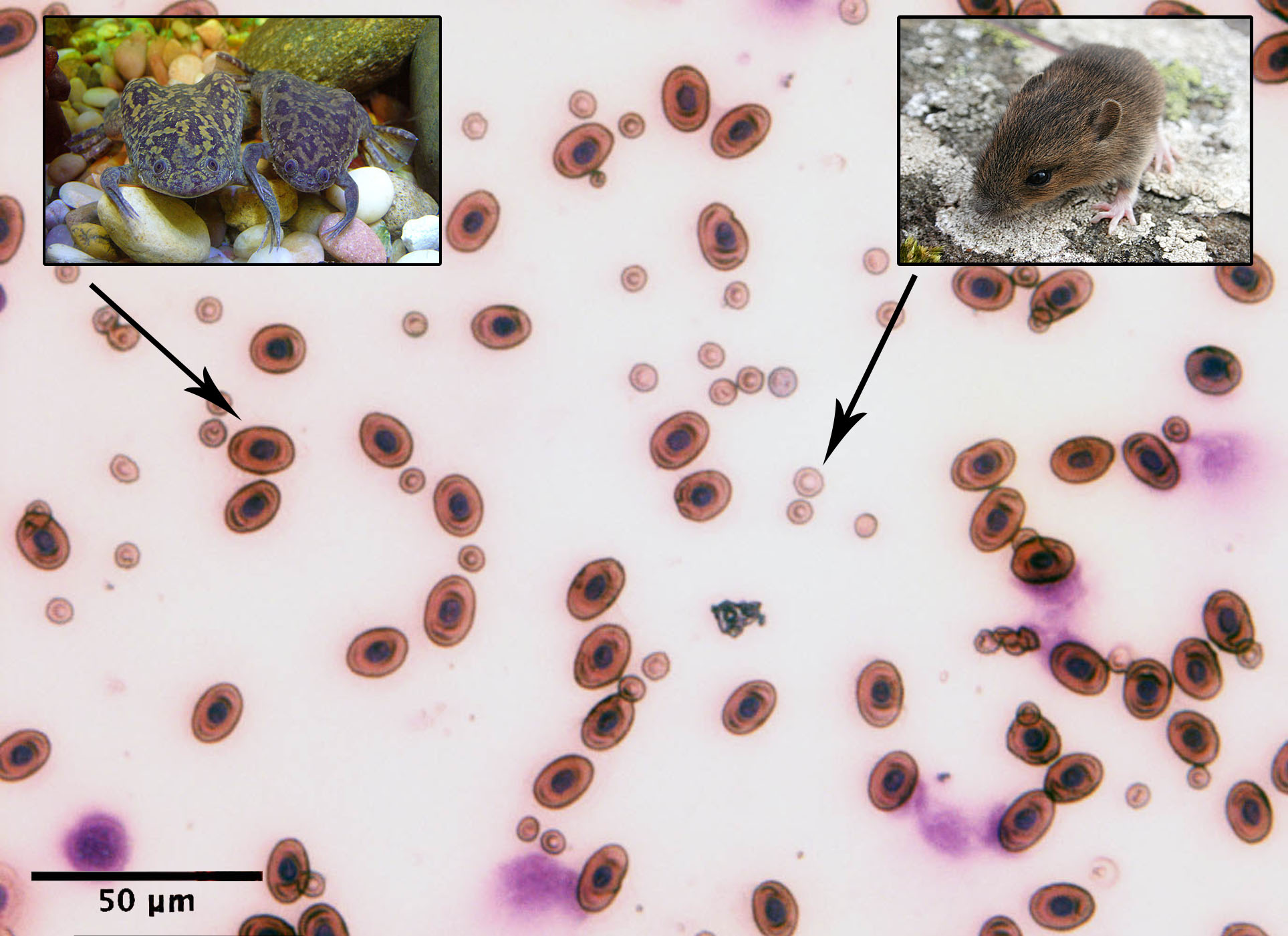 It may seem counterintuitive that tiny RBCs deliver oxygen more effeciently than larger cells, says Huttenlocker, but the smaller size corresponds to densely packed vascular networks that are far more efficient than big blood cells that are sparsely distributed.

“Think about it like this; it’s much easier to unload people from two small sedans quickly than it is to unload a 15-passenger van at the same rate,” says Huttenlocker. “That’s basically what red blood cells are—vehicles for oxygen. When you have lots more very small ones, you can pick up and drop off oxygen very quickly.”

Huttenlocker knew from previous research that the diameters of capillaries that deliver oxygen to muscles tend to have similar widths as the RBCs of the organism. This makes it easier for the oxygen molecules to leave the blood cells, pass through the capillary wall and push into various tissues. Athletic mammals’ and birds’ RBCs are much smaller than the blood cells of less active animals.

For a paleontologist hoping to find clues in the blood of extinct animals, this presents a problem; capillaries don’t fossilize. So Huttenlocker measured the diameter of the microscopic canals imbedded in fossilized bones that allow capillaries to deliver oxygen to bone tissue. He also measured tiny cavities that hold bone cells, called lacunae.

“This aspect—the diameter of the canals—has been overlooked by paleontologists,” says Colleen Farmer, senior author of the paper and biologist at the U and the museum. The size of the canals is a proxy for the size of the red blood cells, which indicates whether or not an organism had the ability to sustain vigorous exercise, she continues. “Aerobic capacity coevolved with many key life-history traits—mode of locomotion, ability of an animal to migrate, whether the animal experienced intense intraspecific competition—it’s not trivial, aerobic capacity is a central and key aspect of life history.”

A look into a long history

Huttenlocker and Farmer looked at three major lineages of terrestrial animals; the mammals and their extinct relatives, non-avian reptiles and birds and their extinct relatives, and amphibians. The researchers chose these three groups, called the tetrapods, because of their evolutionary history; they all shared the same, ancient four-legged ancestor before branching off on their own evolutionary courses by 320 million years ago. 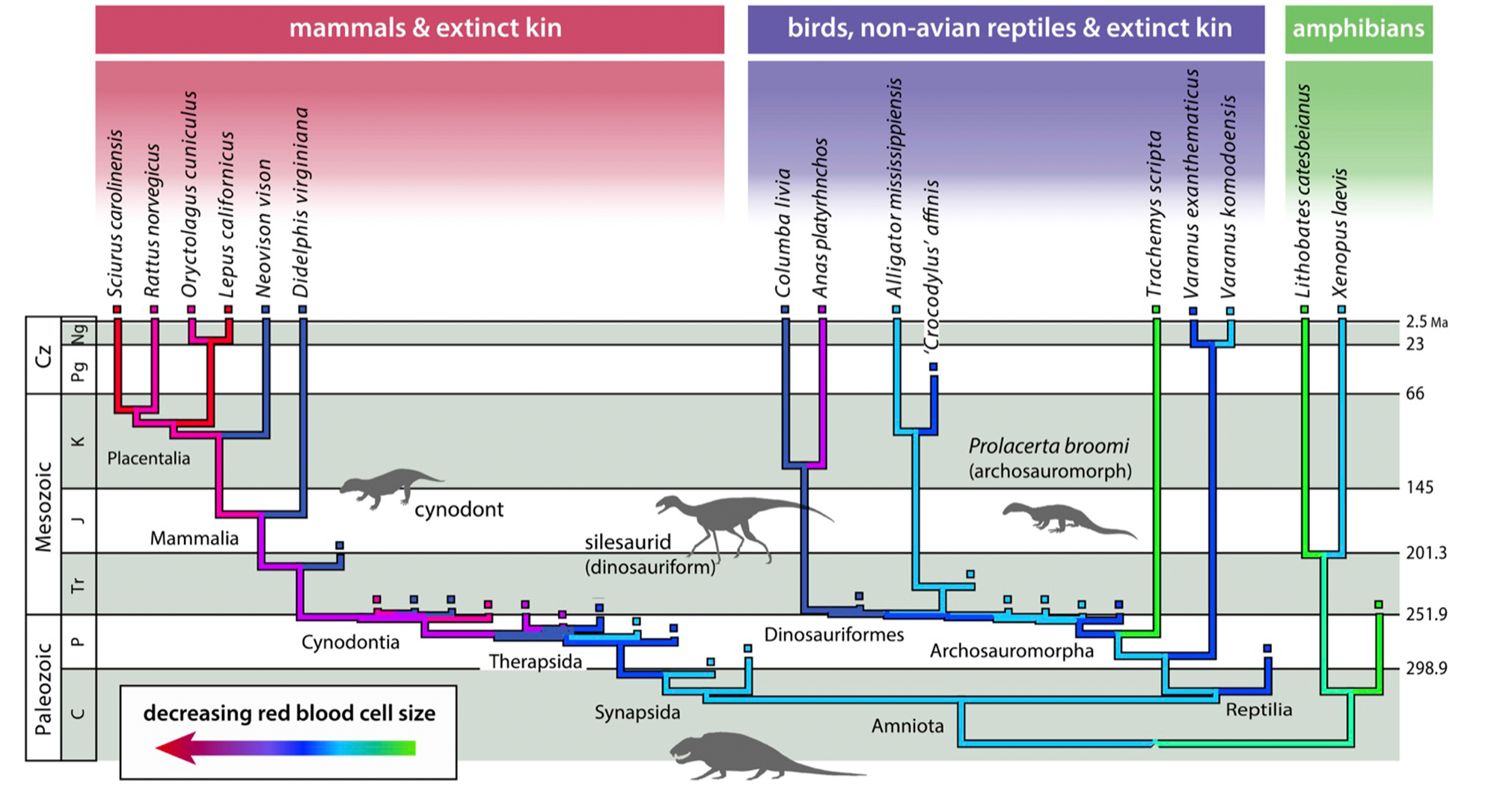 The amphibians, including water-loving frogs and salamanders, diverged from the common tetrapod ancestor first in the early Carboniferous period, more than 320 million years ago. The mammal and reptile lineages branched off next. The extinct mammal-like cynodonts first appeared in the late Permian period, about 260 million years ago. They looked more like stout, possibly furred lizards than the mammals we see today. Around the same time, the reptiles diverged into two groups—the forebears to dinosaurs and birds, called the archosaurs, and the other non-avian reptiles.

At the beginning of the Triassic period 252 million years ago, 90 percent of life died off. The so-called Permian-Triassic mass extinction was the largest extinction event in Earth’s history, and left room for the survivors to diversify and fill in the newly vacant niches.

“We’re dealing with a long timescale. Right before the extinction in the early Permian and Carboniferous are these generalized-looking four-legged animals. By the time you get to the Triassic, they look more like what we see today, but still alien in some ways,” says Huttenlocker.

First, Huttenlocker analyzed the bones of 14 species of living tetrapods: six mammals, two birds, four non-avian reptiles and two amphibians. He made paper-thin sections of each animal’s forelimb bone and digitally visualized the image to see the microscopic canals and bone cell lacunae under a microscope. Then he measured the diameters of the smallest canals and lacunae and came up with equations that could predict the size of the RBCs. He tested his predictions against blood smears to measure the actual blood cell size. He found he was able to predict the size based on the microstructures in the bone.

The researchers found that mammals and birds had smaller canal and lacunae sizes than the non-avian reptiles and amphibians. Additionally, smaller blood cells corresponded to a higher density of canals, which allows oxygen to diffuse into tissues more rapidly. Huttenlocker and Farmer were confident that bone microstructure would be a proxy for RBC size in the extinct animals. They found that all of the Triassic mammal ancestors (the cynodonts) and some earlier mammal predecessors, had similar RBC sizes as modern mammals. The archosauromorphs had a wide range of cell sizes, however the smallest RBCs were about the same size as their contemporary Triassic cynodonts.

The fossilized proxy for RBC size gives clues to the extinct animals’ environment. The cynodonts existed 70 million years before true mammals appeared, yet they lived similar lifestyles. The small cynodonts nested in underground burrows, which often have lower oxygen levels than at the surface. They may have evolved smaller RBCs to dig tunnels, move dirt around, and maintain active lifestyles in low-oxygen environments.

A more controversial hypothesis has to do with a long-term drop in atmospheric oxygen at the beginning of the Triassic. Some people have suggested that adaptations for more efficient oxygen distribution could have been caused by low oxygen levels. Whatever the cause, Huttenlocker says that there must have been some selective factors present during the Triassic period that promoted these traits.

“Similar environmental pressures can result in similar solutions to problems in these very different groups of animals,” says Huttenlocker. “In this paper, we’re just focusing on one little nugget of that. But the forerunners of mammals and birds were able to exercise and be athletes in the Permian-Triassic world.”

Farmer says that they need to analyze lots more living animals to strengthen the case that bone microstructures can be a proxy for athleticism. The tool will enable paleontologists to assess the athletic ability of many types of extinct animals.

“Many fossils have been analyzed without this insight, and the data are just sitting there, and can readily be viewed through this lens,” says Farmer. “This is transformative in providing a new avenue to peer into the past to see what these animals were like.”

This research was funded by a National Science Foundation grant to Adam Huttenlocker.