[Adapted from a news release by the University of Washington] 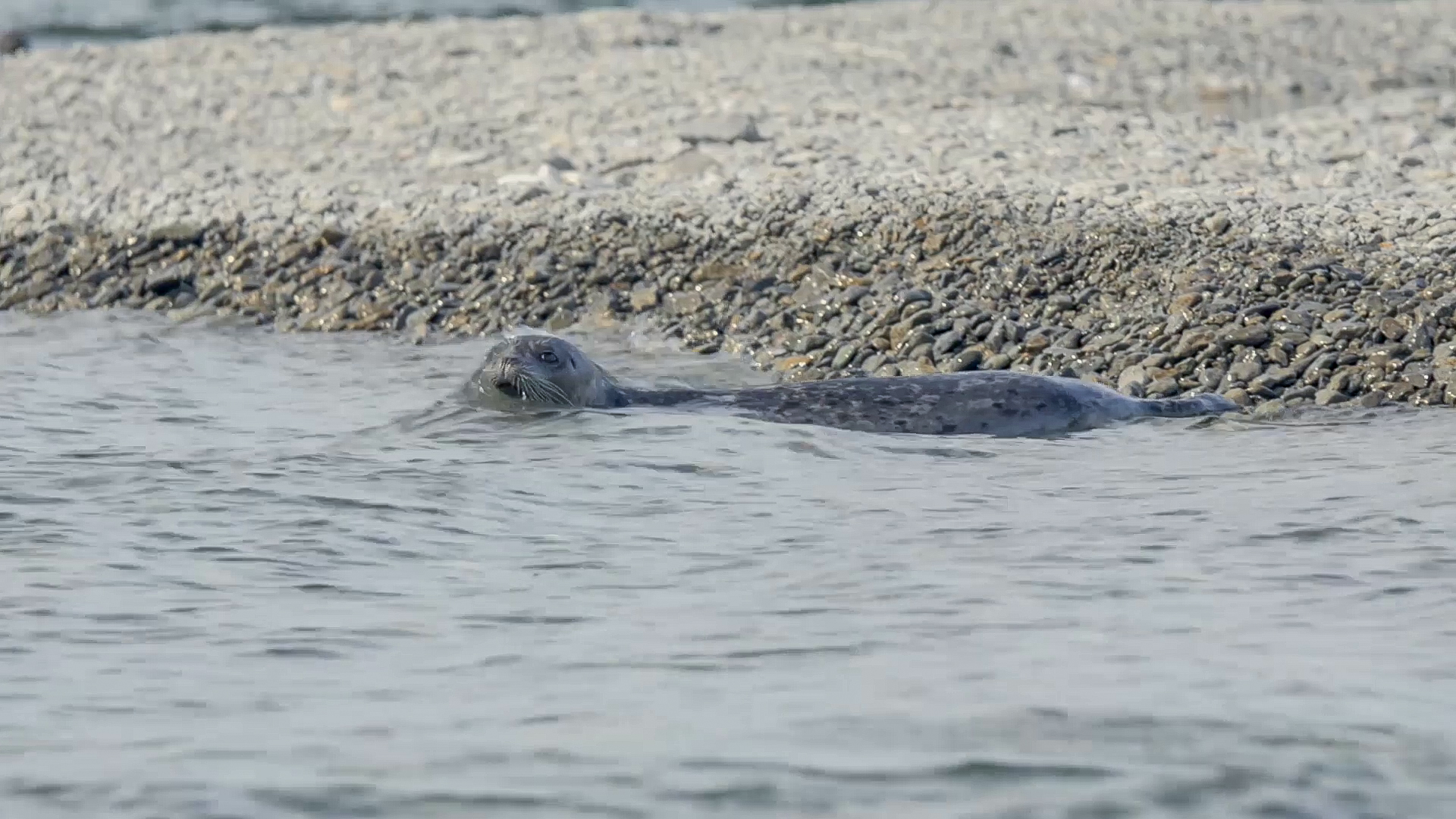 One of the Iliamna Lake seals seen just off a gravel beach on the east end of the lake, the seals’ primary habitat.

Hundreds of harbor seals live in Iliamna Lake, the largest body of freshwater in Alaska and one of the most productive systems for sockeye salmon in the Bristol Bay region.

Sometime in the distant past, a handful of harbor seals likely migrated from the ocean more than 50 miles (80 kilometers) upriver to the lake, where they eventually grew to a consistent group of about 400. These animals are important for Alaska Native subsistence hunting, and hold a top spot in the lake’s diverse food web.

Generations later, the lake-bound seals appear to be a genetically distinct population from their ocean-dwelling cousins—even though they are still managed as part of the larger Eastern Pacific harbor seal population.

But if the lake seals are distinct and show signs of local adaptation to their unique ecological setting, this would mean that their conservation—especially in the face of the rapidly changing climate of western Alaska and proposed industrial developments—should differ from that of nearby marine populations.

Lifelong chemical records stored in their sequentially growing canine teeth show that the Iliamna Lake seals remain in freshwater their entire lives, relying on food sources produced in the lake to survive. In contrast, their relatives in the ocean are opportunistic feeders, moving around to the mouths of different rivers to find the most abundant food sources, which includes a diverse array of marine food items in addition to the adult salmon returning to Bristol Bay’s nine major watersheds. These findings are described in a paper published online in March in Conservation Biology.

“Some chemical elements present in rivers, lakes and oceans can be used to distinguish these bodies of water in the same way that fingerprints set humans apart,” said Diego Fernandez, a research professor in the department of geology and geophysics at the U.  “Because these elements are also incorporated in the tissue of aquatic animals, they are useful to study habitat, migration and diet.”

Iliamna Lake, Alaska’s largest freshwater lake, is situated in the Bristol Bay region. The islands on the east end of the lake are the seals’ primary habitat.

“We clearly show these seals are in the lake year-round, throughout their entire lives,” said lead author Sean Brennan, a postdoctoral researcher at the University of Washington’s School of Aquatic and Fishery Sciences. “This gives us critical baseline information that can weigh in on how we understand their ecology, and we can use that information to do a better job developing a conservation strategy.”

This new study comes at a time when federal agencies are considering whether to permit mining activities in Bristol Bay, a region teeming with wildlife, including Alaska sockeye salmon. Iliamna Lake is located in the heart of the proposed Pebble Mine project. If the seals are determined to be a distinct population, that has important implications for how the Iliamna Lake system is managed, the study’s authors said. The lake and its resident fishes would then be considered critical habitat for seals.

Brennan was a doctoral student at the University of Alaska Fairbanks when he heard about early efforts to evaluate whether the lake seals were a distinct population. Chemical tracing methods he was using to track the life patterns of salmon could also work for the seals, he realized.

“The light just went off in my head,” Brennan said. “What I was doing for salmon was directly applicable to this population of seals.”

Brennan and collaborators at UW, the University of Utah and University of Alaska Anchorage looked at the chemical signatures present in the teeth of lake seals during each year of their life to better understand where they moved and what they ate. Specifically, the scientists drilled into the growth lines of the seals’ canine teeth, then measured the ratio of heavy and light isotopes of carbon, oxygen, and strontium present in each growth layer.

Strontium was particularly important to understanding the diet of the seals. Strontium is a chemical element that can be found in trace amounts in calcium-rich tissues such as teeth and bones. Water in contact with different geologies will acquire distinct strontium isotope abundances. For this study, U researchers measured strontium isotope abundances at their mass spectrometry facilty.

Because of the young bedrock geology of the Kvichak (QUEE-jak) River watershed, which encompasses Iliamna Lake, strontium isotope levels in the ocean are consistently higher than in the lake. Unlike other elements, strontium signatures in mammal teeth directly reflect what animals assimilate from their environment, in particular, what they eat. Therefore, by looking at the strontium isotope ratios over the course of a seal’s life, the researchers saw that the ratios were consistent with lake signatures — meaning these seals only live in Lake Iliamna, depend principally on fish produced within the lake and do not migrate to the ocean.

The researchers say this method could be used to better understand the life patterns of other elusive mammals around the world, such as river dolphins in the Amazon or the Mekong Basin. Broadly, marine mammals in coastal regions are among the most endangered animals on Earth, Brennan said.

“In terms of the broader picture of aquatic mammal conservation across the globe, I think we show that strontium isotopes can be really powerful because they collapse a lot of uncertainty. This method is completely underutilized across the world,” Brennan said.

Co-authors include Daniel Schindler, UW professor of aquatic and fishery sciences; Thure Cerling and Stephanie Aswad at the University of Utah and Jennifer Burns at University of Alaska Anchorage.