When naturalist Charles Darwin stepped onto the Galapagos Islands in 1835, he encountered a bird that sparked a revolutionary theory on how new species originate. From island to island, finches had wildly varied beak designs that reflected their varied diets. The so-called Darwin’s finches are an emblem of adaptive radiation, which describes when organisms from a single lineage evolve different adaptations in response to competitors or predators.

Scientists think that adaptive radiation generates much of the biodiversity on Earth, yet most studies focus on groups that have already diversified. A new study took the opposite approach.

“The changes in color that we saw are as light as the lightest species and as dark as the darkest species in the entire genus—and this genus has been evolving for millions of years,” said Sarah Bush, associate professor in biology at the U and lead author of the paper. “The changes and selection that happens day to day are the same patterns that we see over millions of years.”

This is the first study to show that the evolutionary changes that occurred within a single species (microevolution) echoed changes in color among different species that diverged millions of years ago (macroevolution).

“People have been trying to bridge micro- and macro- evolution for a long time,” said Dale Clayton, professor in biology at the U and co-author of the paper. “This study actually does it. That’s a big deal.”

The study published online on March 5 in the journal Evolutionary Letters. 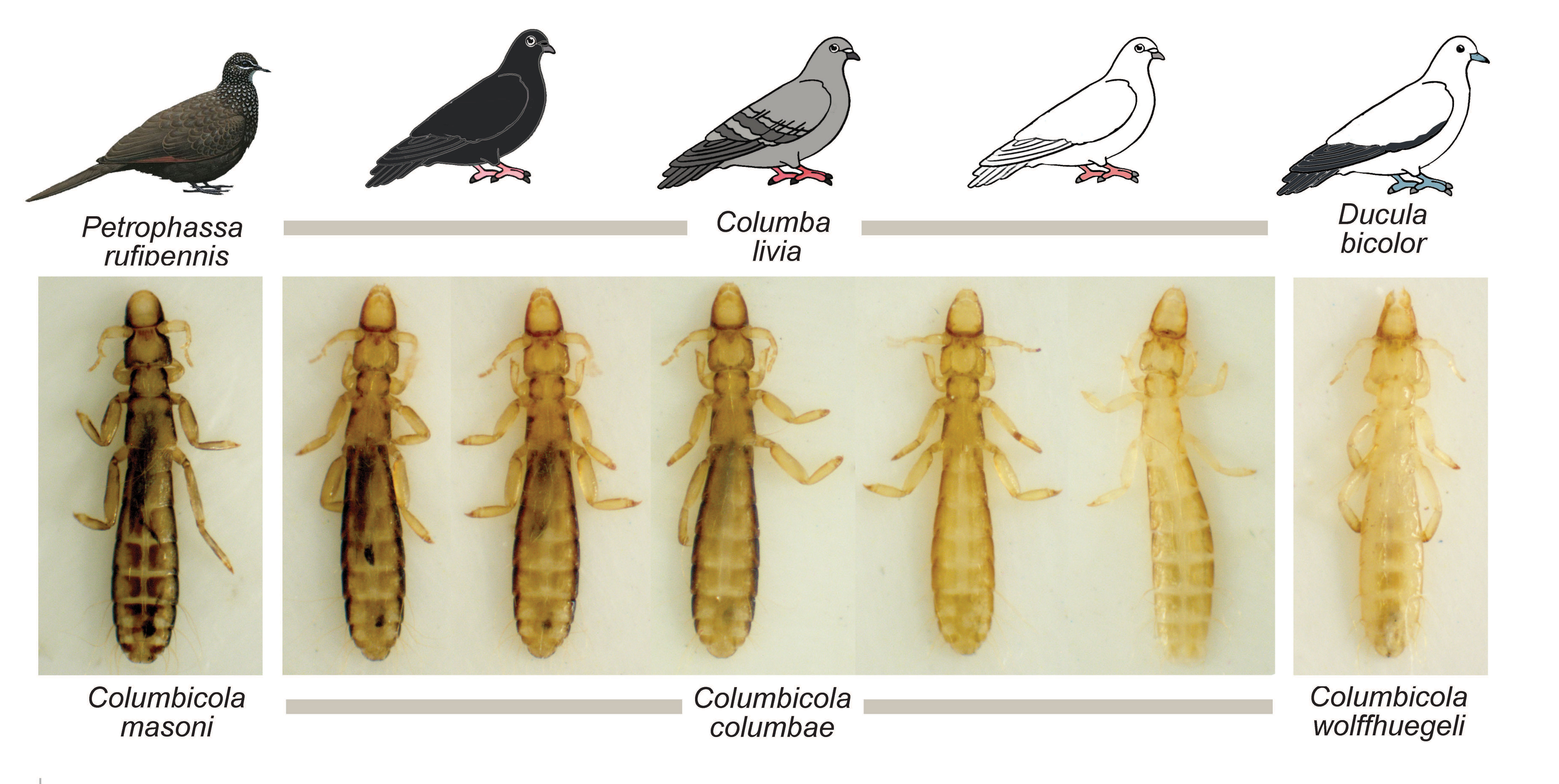 By the end of the 4 year experiment, the lightest lice on white pigeons were as light as the lightest species of lice in the entire genus.

Adaptive radiation is famous on archipelagos. From Hawaiian silverswords to Caribbean lizards, plant and animal lineages diversify rapidly when the ocean limits gene flow and movement between landforms. Parasites are restricted to individual host species and likely adapt and diversify like organisms restricted to islands. The host’s defense seems to be the main driver of adaptive radiation in parasites, yet scientist have never tested this hypothesis experimentally.

The team worked with a host-parasite system that was uniquely easy to manipulate: rock pigeons (C. livia) and their feather lice (C. columbae). The sesame seed-sized lice are feather specialists; they never touch the bird’s skin and have special gut bacteria to digest the keratin-rich down feathers. Pigeons mainly defend themselves by preening and lice hide from prying beaks by matching the color of the feathers, a strategy known as cryptic coloration. 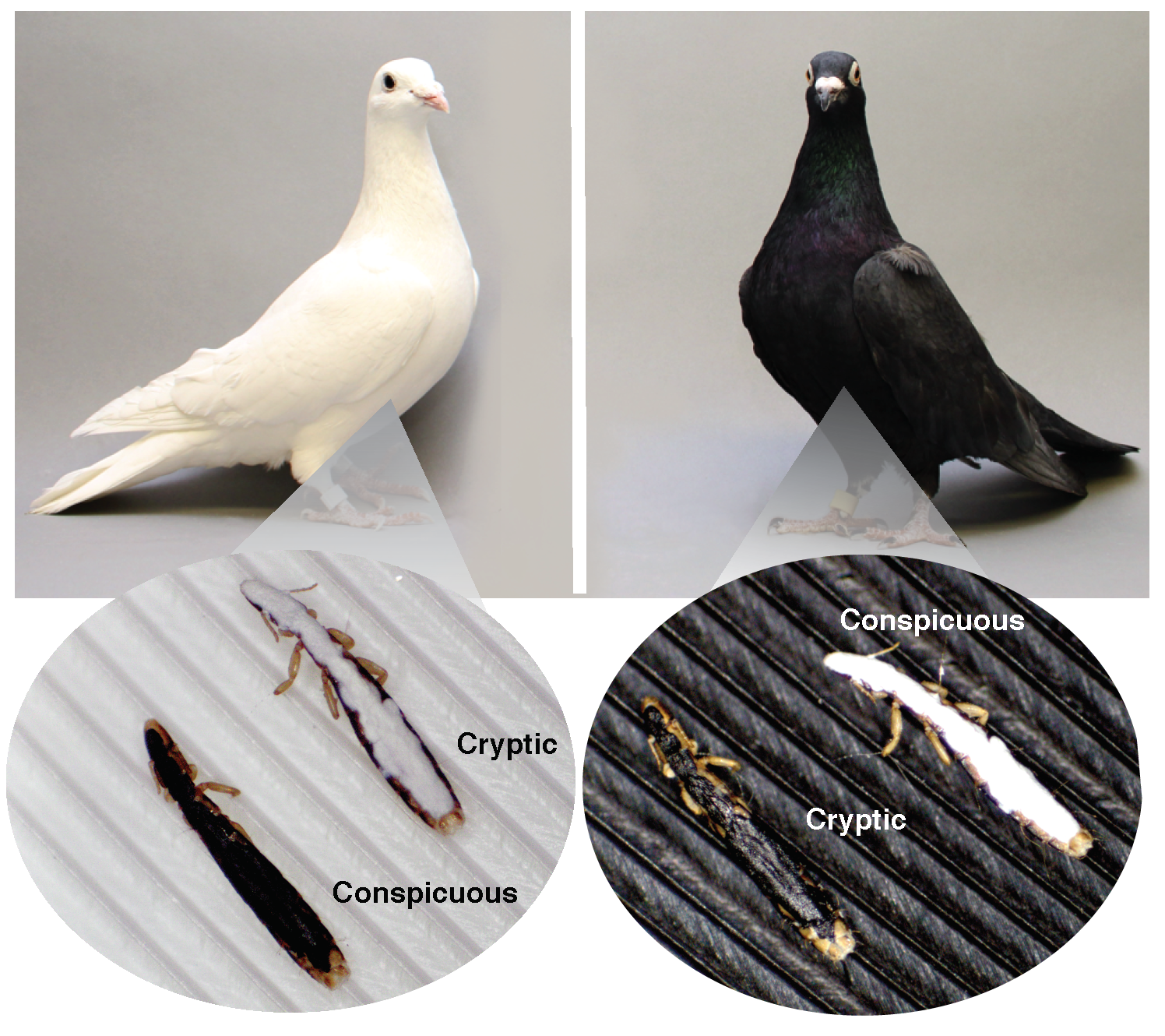 The biologists painted the backs of feather lice, half with black paint, and half with white paint, and put them on black, gray and white pigeons. Lice painted the “wrong” color—black lice on white feathers and vice versa—were 40 percent more likely to be preened than cryptically colored lice.

First, the biologists showed that the birds were visually-preening the lice. They suspected this was the case—in 2010, Bush led a studythat found that birds with light feathers have light-colored lice, and birds with dark feathers had dark colored lice. For the current study, the biologists began with a single population of feather lice and painted their backs with nail polish-like paint: half with black paint, and half with white paint. They then evenly distributed the lice to eight black pigeons and eight white pigeons, let the birds preen for 48-hours before counting how many black and white lice were left on the pigeons.

They found that lice painted the “wrong” color—black lice on white feathers and vice versa—were 40 percent more likely to be preened than the cryptically colored lice. They then did the same experiment but with black and white pigeons who were unable to preen by wearing harmless plastic bits on their beaks. After 48 hours, they found that the birds with impaired preening had no difference between cryptic and conspicuous lice in their feathers. This demonstrated that preening was indeed a selective pressure for lice survival.

To test whether preening selects for different colors of the lice, they infested 96 lice-free rock pigeons with unpainted lice:32 white, 32 black and 32 grey pigeons received 25 lice each. Within each color, half of the birds preened normally while half wore the bits that impaired preening. The lice stayed on these birds over the entire course of the experiment—four years, resulting in about 60 generations of offspring. Every six months the biologists sampled the lice and took photographs to analyze the luminosity (the relative lightness or darkness) of the parasites, then put them back on the birds.

“Look at the range of colors. I mean it just went wham!The color range overlaps with other species of louse in just four years,” said Clayton. “Compared to evolutionary time that’s not even the bat of an eyelash.”

Is the color change heritable? Check!

To test whether the color changes were heritable, Bush and the team needed to verify that the offspring of the lice were similar in color to their parents. They took lice from 12 pigeons who could preen normally and placed them on gray pigeons to reproduce. First, they needed to distinguish the parents from their offspring.

So, they gave the lice tiny haircuts. Co-lead author Scott Villa, a former postdoctoral researcher at the U who is now a postdoctoral fellow in the Department of Biology at Emory University, permanently marked the parent lice by using tiny scissors to trim miniscule bristles, called setae, off of one side of the lice. They then put the lice with these unique haircuts on 12 gray pigeons with impaired preening and waited 48 days. Then they photographed and analyzed the colors of both the parents and later the offspring, which did not have haircuts.

Although the scientists expected that preening would eventually drive divergent camouflage in the lice, they were surprised by how rapid the changes occurred. This probably applies to other pathogens that diversify in response to host defenses, including human pathogens responding to our immune system.

“The cool thing about this project is what we’re observing in terms of evolutionary response isn’t unique to lice, it would apply to anything with DNA,” said Bush.

The biologists are working on a second experiment in which they put feather lice on differently-sized pigeon breeds to see whether preening selects for different-sized lice. The lice may evolve divergent sizes so extreme that they are unable to mate, a significant step in the origin of a new species. Stay tuned.

Juan C. Altuna and Michael D. Shapiro of the School of Biological Sciences at the University of Utah, and Kevin P. Johnson from the University of Illinois at Urbana Champaign also contributed to this study. This work was supported by National Science Foundation DEB- 0107947 and DEB-1342600.