Why do people go to war when the consequences of warfare are so dramatic? Scholars have suggested that the motivations for participating in war either lie in the individual rewards warriors receive (to the victor goes the spoils) or because group members coerce them to participate for fear of punishment. Understanding the factors that motivate warriors to join war parties sheds light on some of the most fundamental aspects of human nature: How our ability to cooperate is linked to our most destructive tendencies.

In a new study, a team of researchers examined the social composition of raiding parties and their relationship to marriage alliances in an Amazonian tribal society, the Waorani of Ecuador. The Waorani formerly practiced lethal raiding, or small-scale warfare, as part of their social fabric. The anthropologists spoke in detail with tribal members about their raiding histories in an attempt to understand what drives individuals to participate in acts of war. Theirs is one of only a handful of datasets in the world with detailed information about what warfare looks like in small-scale societies prior to the intervention of the state.

They found that Waorani are actively joining raids with people who could provide access to ideal marriage partners for themselves as well as their children. Additionally, subtle coercion from in-laws appears to be a factor in joining raids. The relationships built through raiding resulted in meaningful bonds between the men, which could shed light on the evolution of friendship.

“A big debate in anthropology is what warfare and raiding groups look like in small-scale societies. Arguments have always been about this nice band of brothers—literally brothers, uncles, fathers all fighting side-by-side with one another,” said Shane Macfarlan, assistant professor of anthropology at the University of Utah and lead author of the study. “But sometimes, kin are not enough. Warfare is about alliance building, relationships with other people where there might be something else to gain by fighting with one another—like marriage partners.”

The study published on Oct. 31, 2018, in the journal Proceedings of the Royal Society B. 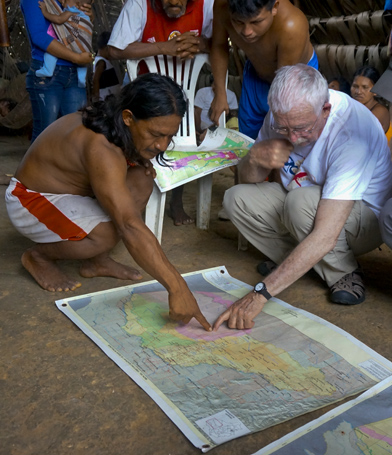 Co-author Jim Yost (right) with a Waorani man discussing Waorani territory during the data collection component of the project.

The Waorani are indigenous Ecuadorians from the lowlands of the Amazon Rainforest made up of 2,000 individuals today. When people of Euro-American descentfirst made contact with members of the tribe in 1958, the population consisted of 500 individuals residing in four mutually hostile territories. Within the territories, Waorani lived in neighborhoods of longhouses, called nanicabo. Each neighborhood was separated by a one- to two-days walk, and each nanicabowas separated by a 30- to 60-minute walk.

For the Waorani, the ideal marriage partners are bilateral cross cousins—for example a man’s mother’s brother’s daughter or his father’s sister’s daughter. One of the ways to make alliances is through raiding. Lethal raiding was quite common amongst the Waorani; when an individual decided to raid, he would convince followers to join him.

“The benefit of making an alliance outside of your direct kin is that it expands your social universe for getting the things that you need, and one of the things that people need in all societies is mating partners,” said Macfarlan.

Between 2000 and 2001, co-authors Jim Yost, Pam Erickson of University of Connecticut and Steve Beckerman of Pennsylvania State University interviewed almost all of the Waorani population aged 49 years or older—65 women and 55 men. The researchers collected detailed genealogical information from multiple generations, and cross-referenced the data with existing Waorani genealogies. They also collected raid histories that included the men who participated, the organizer, the victims, and the rationale for the attack. The researchers used marriages and births to establish a timeline of the raids. From 1917 to 1970, there were 550 raid reports. The researchers consolidated them into 49 separate raids that involved 81 people.

Macfarlan and senior author Stephen Beckerman analyzed the make-up of the raiding groups and the raiders’ marriage histories. If the “bands of brothers” model holds, then the raiders should include mostly direct ancestors or descendants of each other, known as lineal kin. If the groups were strategic alliances, then the individuals should consist of men who can provide marriage opportunities for each other—genetically related, but outside of lineal kinship. Because the researchers needed to be able to distinguish cousins, they only used individuals for whom they had grandparents’ information. They analyzed the social composition of the 49 raids, including the 1041 individual relationships that emerged from the 81 men who participated.

Although males had a plenty of lineal kin to choose from for forming raiding parties, they selectively raided with non-lineal kin. They also found that men raided more frequently with men who were generically related to them, but from different lineages—the ideal marriage exchange partners. Indeed, the raiding alliances resulted in marriages for both the raiders, and for the raiders’ children.

Yet another motivation to join raiding parties seemed to include some coercion. Macfarlan found that sometimes men got married first, then raided more frequently with his in-laws.

While scholars have typically assumed that warfare was either about individual rewards or coercion we find that this is a two-way street. “Sometimes people go to war to find alliance partners that gives them access to marriage opportunities, but other times guys get married first and then these marriage ties are leveraged to coerce people into warfare.”

Humans for the most part have three kinds of relationships: kinship, marriage and friendship. Traditionally, anthropologists only considered kinship and marriage as important. Recent interest has looked into the evolution of friendship itself. A common feature of friendship across cultures is that it promotes cooperation between people who are neither are kin nor our lovers, with our friends providing us with benefits that kin and lovers cannot. One context where friendship is extremely important is helping us deal with conflict from other people and groups, known as the Alliance Hypothesis.

The study’s findings provide evidence for this hypothesis, Macfarlan said.

“The act of killing another human is a really traumatic act, which causes people to share something in common psychologically that establishes trust and fosters things like friendships,” said Macfarlan.