The struggle to keep drinks cold during the summer is a lesson in classical phase transitions. To study phase transitions, apply heat to a substance and watch how its properties change. Add heat to water and at the so-called “critical point,” watch as it transforms into a gas (steam). Remove heat from water and watch it turn into a solid (ice).

Now, imagine that you’ve cooled everything down to very low temperatures — so low that all thermal effects vanish. Welcome to the quantum realm, where pressure and magnetic fields cause new phases to emerge in a phenomenon called quantum phase transitions (QPT). More than a simple transition from one phase to another, QPT form completely new properties, such as superconductivity, in certain materials. 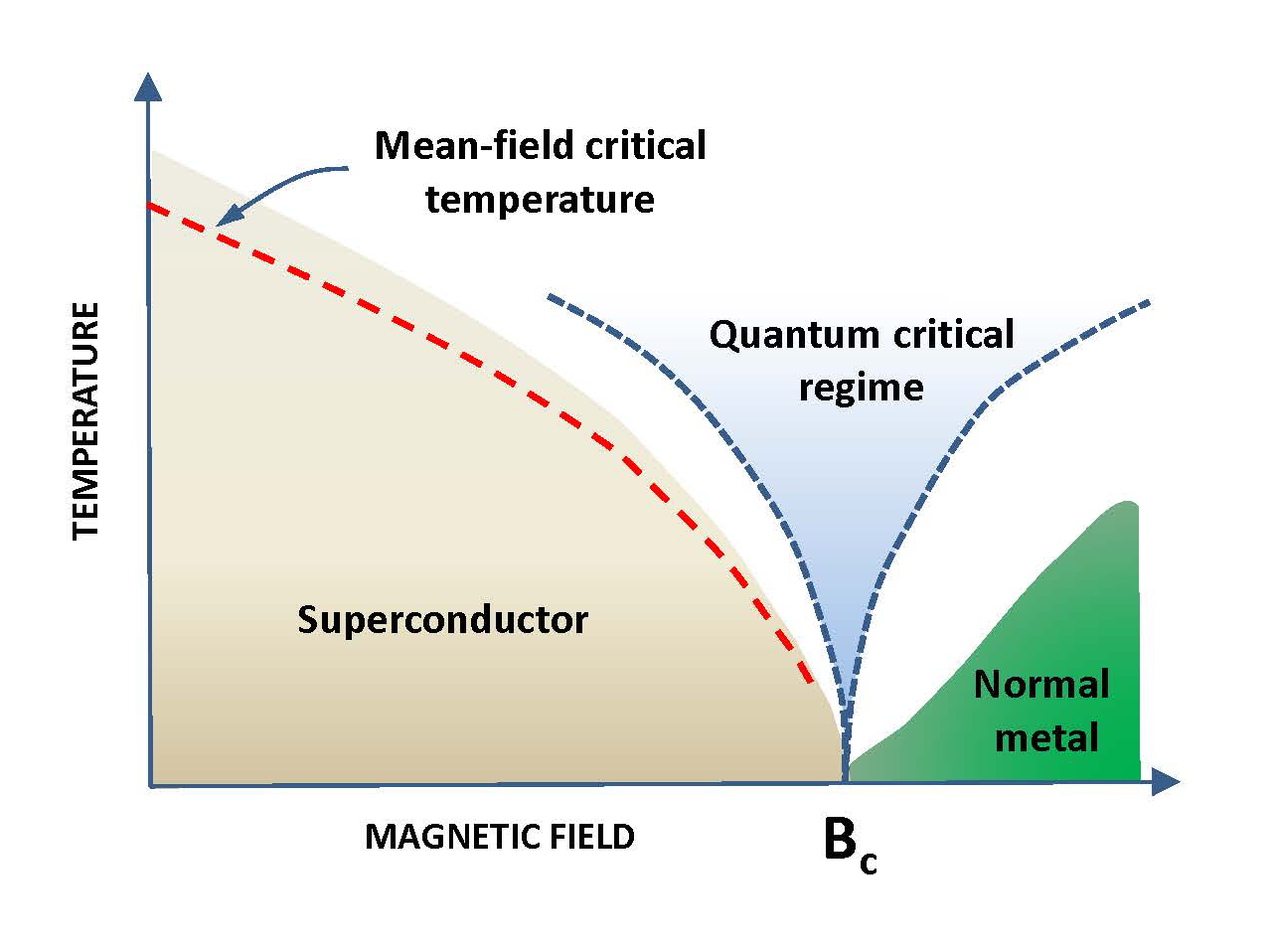 This schematic diagram shows the quantum phase transition of a superconducting metal to a normal metal at zero temperature. As the magnetic field increases in strength, the superconductivity breaks down until the critical point at which the material becomes a normal metal.

Apply voltage to a superconductive metal, and the electrons travel through the material with no resistance; electrical current will flow forever without slowing down or producing heat. Some metals become superconducting at high temperatures, which has important applications in electric power transmission and superconductor-based data processing. Scientists discovered the phenomenon 30 years ago, but the mechanism for superconductivity remains an enigma because the majority of materials are too complex to understand QPT physics in details. A good strategy would be first to look at less complicated model systems.

Now, University of Utah physicists and collaborators have discovered that superconducting nanowires made of MoGe alloy undergo quantum phase transitions from a superconducting to a normal metal state when placed in an increasing magnetic field at low temperatures. The study is the first to uncover the microscopic process by which the material loses its superconductivity; the magnetic field breaks apart pairs of electrons, called Cooper pairs, which interact with other Cooper pairs and experience a damping force from unpaired electrons present in the system.

The findings are fully explained by the critical theory proposed by coauthor Adrian Del Maestro, associate professor at the University of Vermont. The theory correctly described how the evolution of superconductivity depends on critical temperature, magnetic field magnitude and orientation, nanowire cross sectional area, and the microscopic characteristics of the nanowire material. This is the first time in the field of superconductivity that all details of QPT predicted by a theory were confirmed on real objects in the lab.

“Quantum phase transitions may sound really exotic, but they are observed in many systems, from the center of stars to the nucleus of atoms, and from magnets to insulators,” said Andrey Rogachev, associate professor at the U and senior author of the study.“By understanding quantum fluctuations in this simpler system, we can talk about every detail of the microscopic process and apply it to more complicated objects.”

An illustration that describes Del Maestro’s pair-breaking critical theory in nanowires. Electrons inside an ultra-thin MoGe wire with a radius on the order of 10 nanometers can pair up at low temperatures (green) and travel from one contact to the other without resistance in the superconducting phase. In the presence of a magnetic field penetrating the wire, the members of the pairs are deflected in opposite directions (pink and blue) and may collide with the edges of the wire and break apart. As the strength of the field is increased, all pairs break, and the nanowire undergoes a zero temperature phase transition from a superconductor to a normal metal. At the transition, the conductivity of the wire is a universal number that does not depend on any specific details of the wire composition or field direction.

As a postdoctoral fellow, Rogachev showed that applying magnetic fields to nanowires under low temperatures distorts superconductivity.  He understood the effects at finite temperatures but came to no conclusion as to what happens at the “critical point” where superconductivity falters. His work, however, inspired the young theoretical physicist Adrian Del Maestro, a graduate student at Harvard at the time, to develop a complete critical theory of the quantum phase transition.

In Del Maestro’s “pair breaking” theory, single electrons are unlikely to bump into the edges of the smallest wire since even a single strand of atoms is large compared to the size of an electron.  But, said Del Maestro, “two electrons that form the pairs responsible for superconductivity can be far apart and now the nanoscale size of the wire makes it more difficult for them to travel together.” Then add in a powerful magnetic field, which disentangles pairs by curving their paths, and “the electrons are unable to conspire to form the superconducting state,” said Del Maestro.

“Imagine that the edges of the wire and the magnetic field act like some frictional force that makes electrons not want to pair up as much,” said Del Maestro. “That physics should be universal.” Which is exactly what his theory and the new experiment show. 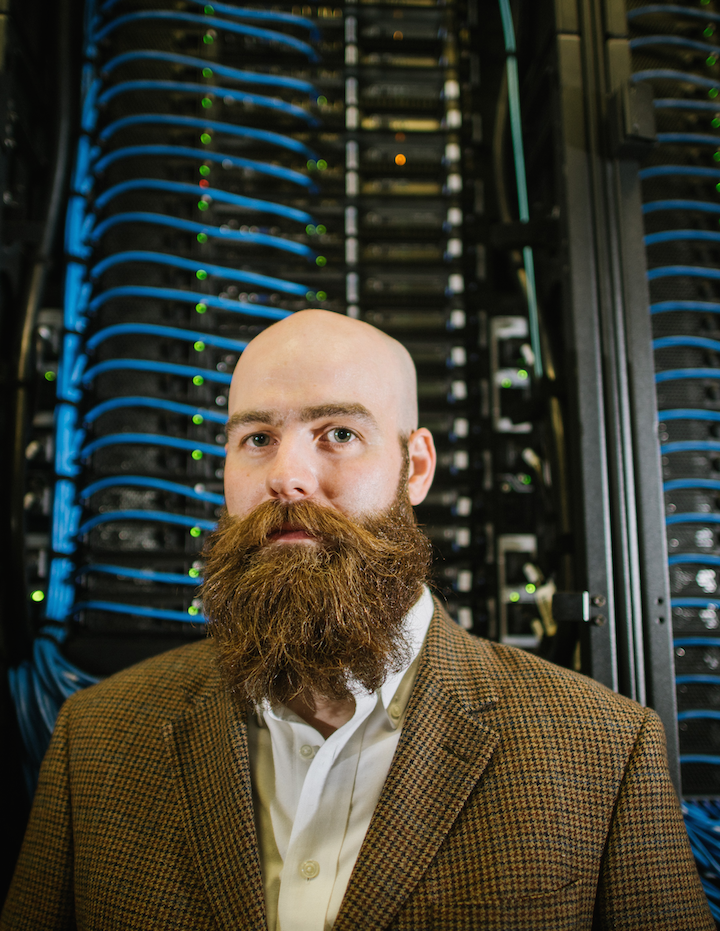 Adrian Del Maestro, associate professor at the University of Vermont, developed the critical pair-breaking theory that fully explained the evolution of superconductivity in quantum nanowires.

“Only a few key ingredients—spatial dimension and existence of superconductivity—are essential when describing the emergent properties of electrons at quantum phase transitions,” he said. The amazing agreement between the conductivity values Del Maestro’s theory predicted over a decade ago and the values measured in the new experiment sets a powerful standard for “the experimental confirmation of quantum universality,” Del Maestro said, “and underscores the importance of fundamental physics research.”

The MoGe nanowires are the crucial element of the whole study. In his postdoctoral days, Rogachev could only make such wires 100 nanometers long, too short to test the critical regime. Years later at the U, he and his then-student Hyunjeong Kim, lead author of the study, improved upon an existing method of electron beam lithography to develop a state-of-the-art technique. 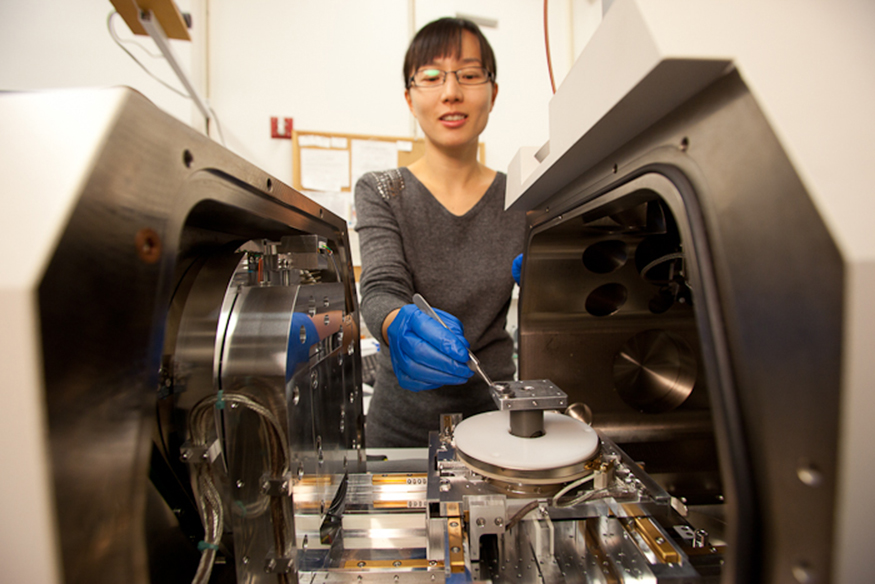 Hyunjeong Kim, first author of the paper formerly at the University of Utah, led efforts to develop a state-of-the-art technique to develop nearly one-dimensional nanowires. Here, she demonstrates the method at the electron beam lithography apparatus.

Ninety-nine percent of physicists create nanostructures using a method called positive electron beam (e-beam) lithography. They shine a beam of electrons onto an electron-sensitive film, then remove the exposed part of the film to create needed structures. Far fewer physicists use negative e-beam lithography, in which they draw their structure with the e-beam but remove all of the unexposed film. This is the method that Kim bought to the state-of-the-art, fabricating thin nanowires with widths below 10 nm.

“It’s not just that we make them, but we can measure them,” said Rogachev. “Many people make really small particles, but to really be able to look at transport on these wires, it was like developing a new technique.”

To test the quantum phase transitions, Rogachev brought the wires to Benjamin Sacépé and Frédéric Gay at the Institut Néel in Grenoble where their facility is capable of cooling the material to 50 milliKelvin, applying magnetic field of various strengths and measuring the wires’ resistance to describe how the superconductivity breaks down. The French collaborators added to the group years of expertise in precise transport measurement, noise-rejection techniques and quantum physics of two-dimensional superconductors. 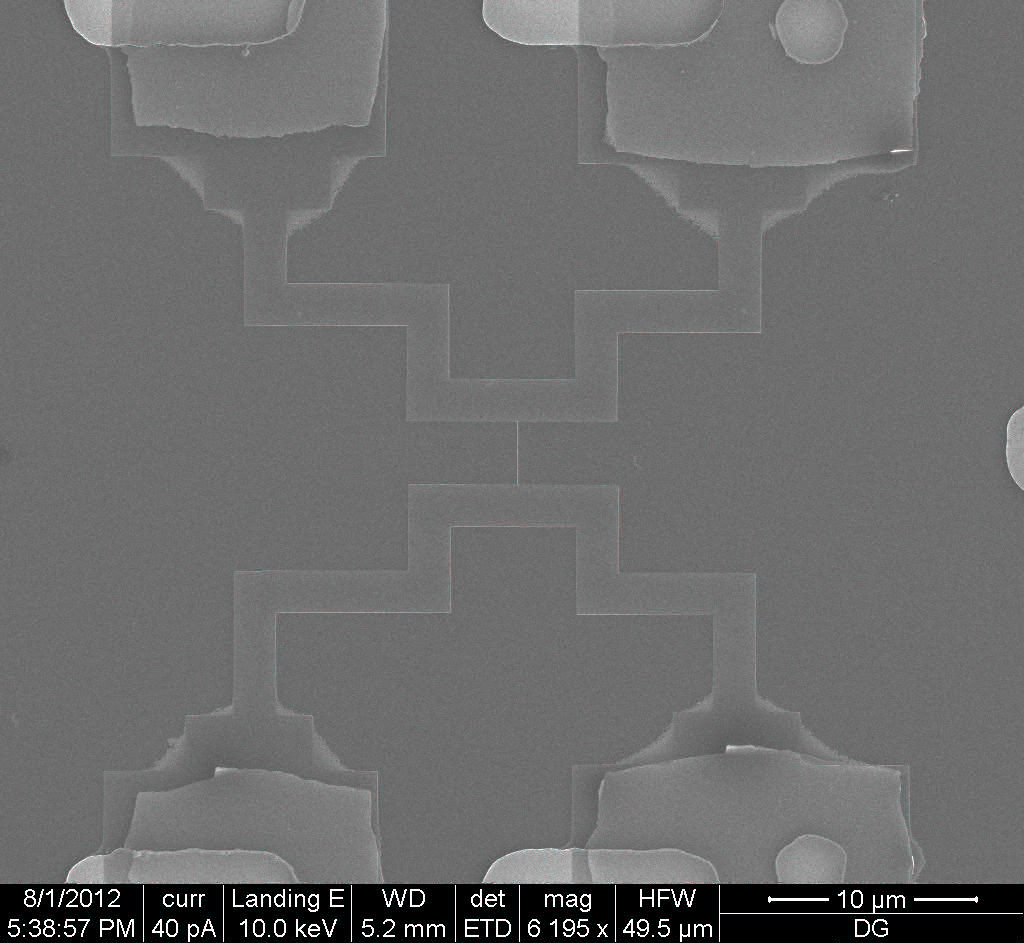 A scanning electron microscopy image of a nanowire similar to those used in the study.

“After decades of intensive research, we are still far from fully understanding superconductivity” says Tomasz Durakiewicz, program director for condensed matter physics at the National Science Foundation, which co-funds this work. “These results significantly advance the field by closely linking the tangible, physical universe of nanowires and the field-driven phase transitions happening at the quantum scale. By merging theory and experiment, the team was able to explain the complex relationship between conductivity and geometry, magnetic fields and critical temperature, all while proposing a theory of quantum criticality that is in excellent agreement with experimental observations.”

Bringing it to higher temperatures

Rogachev is now preparing to test nanowires made of cuprates. Cuprates have a quantum phase transition between a magnetic state and a normal state, At the critical point, there are quantum fluctuations that, according to several theories, promote the emergence of superconductivity. The cuprates are often called high-temperature superconductors because they go to the superconducting state at the record-high temperature of 90-155 K, a contrast to the rather small critical temperature of MoGe alloys at 3 – 7 K. Rogachev wants to make wires out of cuprates to understand the microscopic mechanism of high-temperature superconductivity. Another avenue he wants to explore with his collaborators in Grenoble is quantum phase transition in superconducting films. 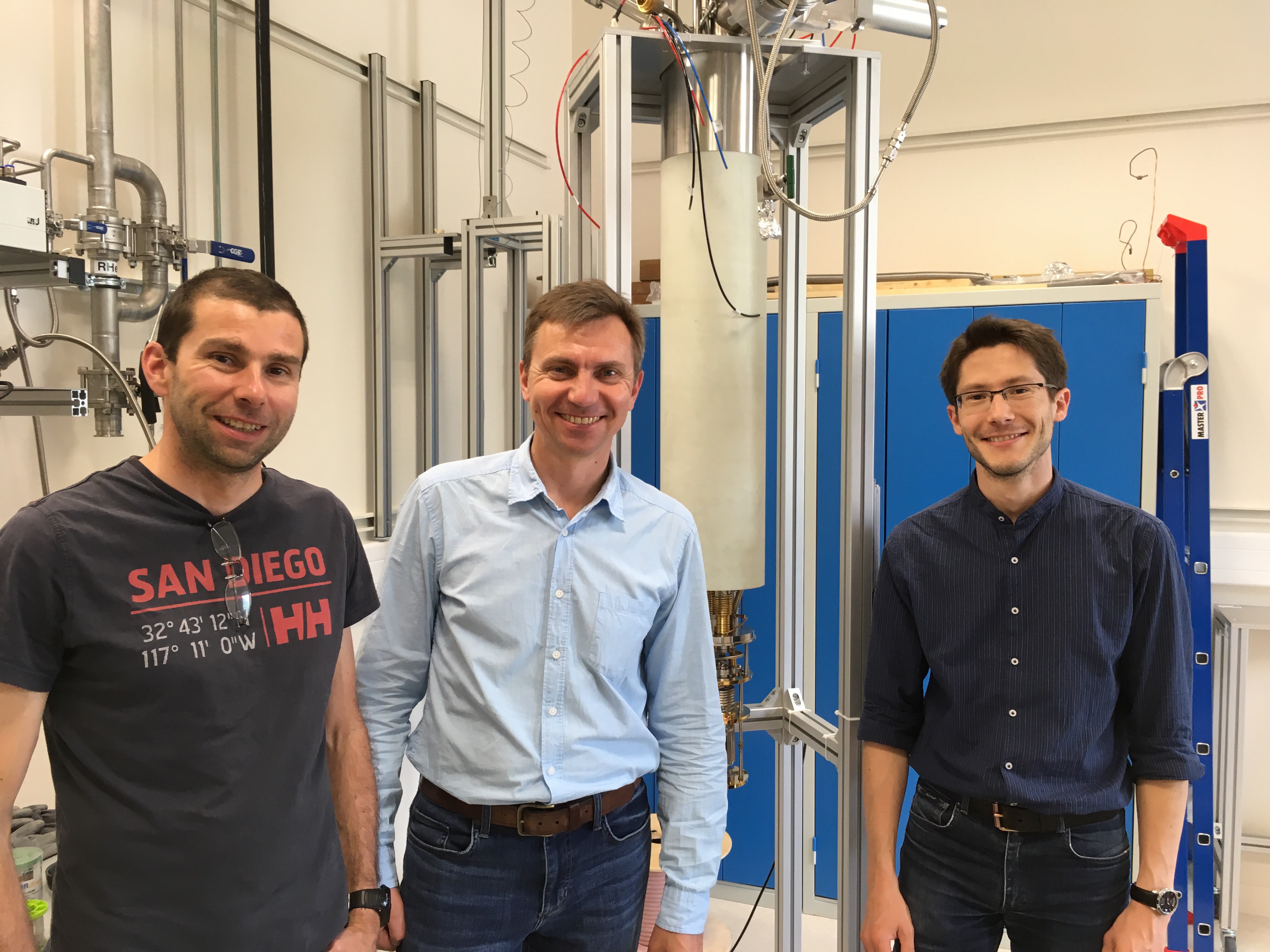 Andrey Rogachev (center) with collaborators Benjamin Sacépé (right) and Frédéric Gay (left) at the Institut Néel in Grenoble at the facility where they ran the experiments in the study.

“Now we have this certain piece of physics worked out, we can move to more complicated objects where we basically don’t know exactly what is going on,” he said.

The research was supported by the National Science Foundation and the ERC grant QUEST. Nanowire fabrication was carried out at the University of Utah Microfab and USTAR facilities.