August 7, 2017—Hundreds of thousands of years ago, the ancestors of modern humans diverged from an archaic lineage that gave rise to Neanderthals and Denisovans. Yet the evolutionary relationships between these groups remain unclear.

A University of Utah-led team developed a new method for analyzing DNA sequence data to reconstruct the early history of the archaic human populations. They revealed an evolutionary story that contradicts conventional wisdom about modern humans, Neanderthals and Denisovans.

The study found that the Neanderthal-Denisovan lineage nearly went extinct after separating from modern humans. Just 300 generations later, Neanderthals and Denisovans diverged from each other around 744,000 years ago. Then, the global Neanderthal population grew to tens of thousands of individuals living in fragmented, isolated populations scattered across Eurasia.

“This hypothesis is against conventional wisdom, but it makes more sense than the conventional wisdom.” said Alan Rogers, professor in the Department of Anthropology and lead author of the study that published online on August 7, 2017 in the Proceedings of the National Academy of Sciences.

With only limited samples of fossil fragments, anthropologists assemble the history of human evolution using genetics and statistics.

“Looking at the data that shows how related everything was, the model was not predicting the gene patterns that we were seeing,” said Ryan Bohlender, post-doctoral fellow at the M. D. Anderson Cancer Center at the University of Texas, and co-author of the study. “We needed a different model and, therefore, a different evolutionary story.”

The team developed an improved statistical method, called legofit, that accounts for multiple populations in the gene pool. They estimated the percentage of Neanderthal genes flowing into modern Eurasian populations, the date at which archaic populations diverged from each other, and their population sizes.

A family history in DNA

Scientists use these mutations to piece together evolutionary history hundreds of thousands of years in the past. By searching for shared gene mutations along the nucleotide sites of various human populations, scientists can estimate when groups diverged, and the sizes of populations contributing to the gene pool.

“You’re trying to find a fingerprint of these ancient humans in other populations. It’s a small percentage of the genome, but it’s there,” said Rogers.

They compared the genomes of four human populations: Modern Eurasians, modern Africans, Neanderthals and Denisovans. The modern samples came from Phase I of the 1000-Genomes project and the archaic samples came from the Max Planck Institute for Evolutionary Anthropology. The Utah team analyzed a few million nucleotide sites that shared a gene mutation in two or three human groups, and established 10 distinct nucleotide site patterns. 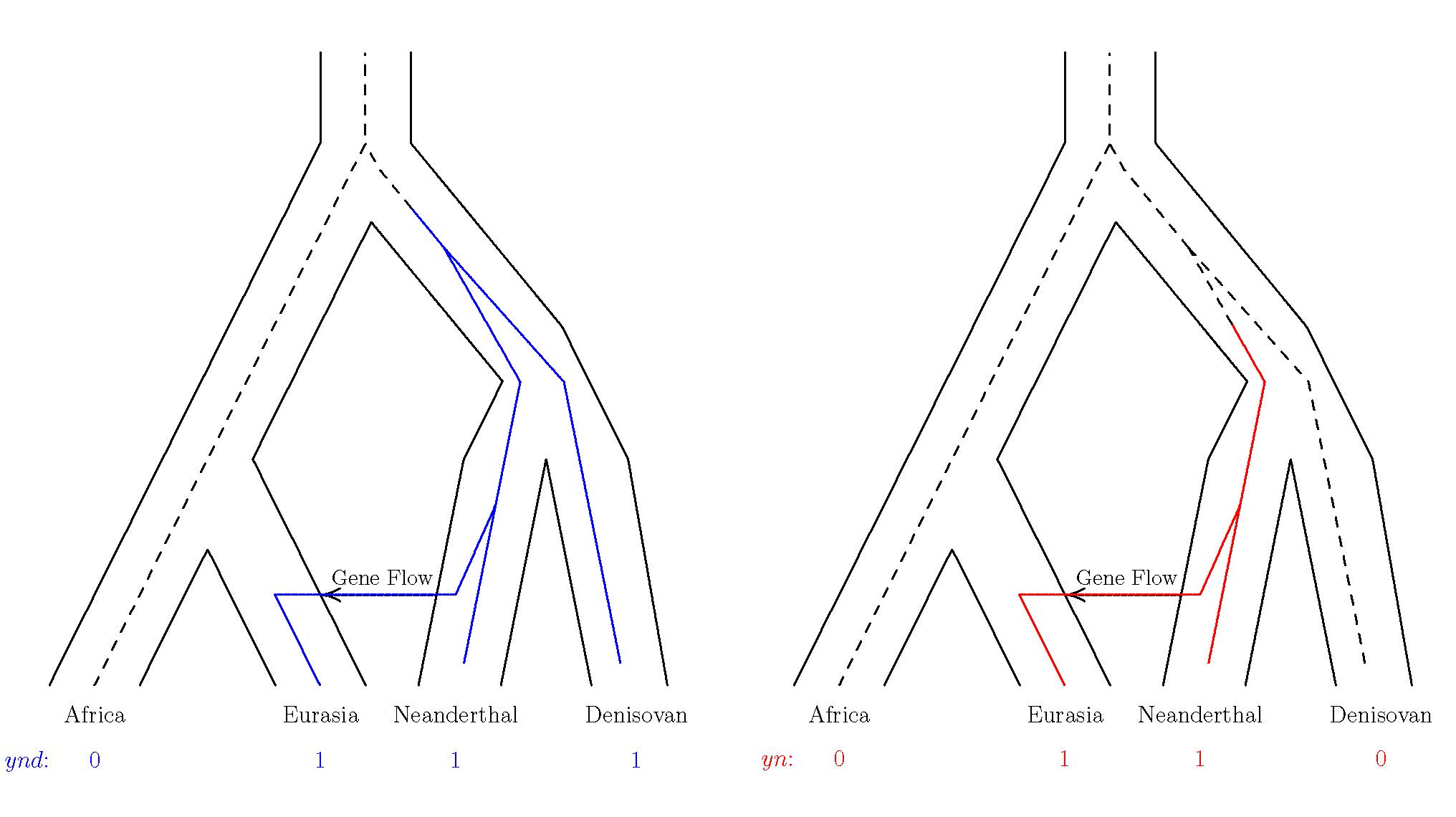 These population trees with embedded gene trees show how mutations can generate nucleotide site patterns. The four branch tips of each gene tree represent genetic samples from four populations: modern Africans, modern Eurasians, Neanderthals, and Denisovans. In the left tree, the mutation (shown in blue) is shared by the Eurasian, Neanderthal and Denisovan genomes. In the right tree, the mutation (shown in red) is shared by the Eurasian and Neanderthal genomes.

“If Neanderthals and Denisovans had separated later, then there ought to be more sites at which the mutation is present in the two archaic samples, but is absent from modern samples,” said Rogers.

The analysis also questioned whether the Neanderthal population had only 1,000 individuals. There is some evidence for this; Neanderthal DNA contains mutations that usually occur in small populations with little genetic diversity.

However, Neanderthal remains found in various locations are genetically different from each other. This supports the study’s finding that regional Neanderthals were likely small bands of individuals, which explains the harmful mutations, while the global population was quite large.

“The idea is that there are these small, geographically isolated populations, like islands, that sometimes interact, but it’s a pain to move from island to island. So, they tend to stay with their own populations,” said Bohlender.

Their analysis revealed that the Neanderthals grew to tens of thousands of individuals living in fragmented, isolated populations.

“There’s a rich Neanderthal fossil record. There are lots of Neanderthal sites,” said Rogers. “It’s hard to imagine that there would be so many of them if there were only 1,000 individuals in the whole world.”

Rogers is excited to apply the new method in other contexts.

“To some degree, this is a proof of concept that the method can work. That’s exciting,” said Rogers. “We have remarkable ability to estimate things with high precision, much farther back in the past than anyone has realized.”