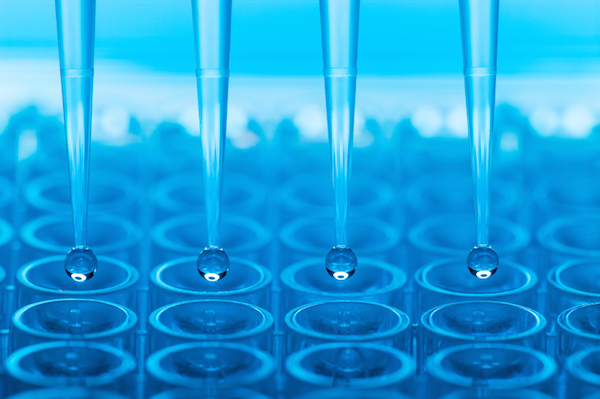 The liquid biopsy, a new type of blood test for detecting and monitoring cancer, is a welcome reprieve from typical biopsies. The minimally invasive test could reduce the need for the sometimes painful and risky procedures involved in sampling tumors, particularly those that reside deep within the body. However, thus far, the utility of the test has been limited by its sensitivity, particularly in its detection of solid tumors that have not yet metastasized.

A study led by the University of Utah School of Medicine reports an advance that could directly increase the sensitivity of liquid biopsies. Liquid biopsies work by detecting pieces of DNA from tumors that are shed into the blood. But so-called circulating tumor DNA can be difficult to pick out amidst abundant circulating DNA from healthy cells. Published on July 18 in PLOS Genetics, the study demonstrates that the fragments of circulating tumor and healthy DNA in cancer patients are differently sized, a property that can be exploited to distinguish between the two types of DNA.

“This development has the potential to enable earlier detection of solid tumors through a simple blood draw by substantially improving our ability to detect very low quantities of circulating DNA derived from tumor cells,” says corresponding author and assistant professor of pediatrics Hunter Underhill, M.D., Ph.D. He initiated the research while in the lab of senior author Jay Shendure, M.D., Ph.D., a professor in genome sciences at the University of Washington. Collaborators also include Mary Bronner, M.D., a professor in the department of pathology at the U of U, and at ARUP Laboratories.

Circulating tumor DNA (blue line) in the blood is on average smaller in size than circulating DNA from healthy cells (green line). New research from the University of Utah School of Medicine suggests the property can be exploited to increase the sensitivity of a type of blood test for monitoring cancer called a liquid biopsy. The sample circulating tumor DNA comes from a melanoma patient.

The size difference between tumor and healthy circulating DNA was initially discovered in animal tumor models created by creating tumors from human cancer cells. In a model of glioblastoma, a brain cancer that does not metastasize outside of the brain, they could readily see that the length of circulating tumor DNA was smaller than healthy DNA by 20-50 base pairs. This size difference was then confirmed in an animal model of liver cancer indicating the size difference may be present in more than one type of tumor. However, it was unclear at this stage in their research if this was a species-specific finding limited to animal tumor models or if this was a biologic phenomenon that may also be present in cancer patients.

In a following step, the investigators then compared circulating DNA from melanoma patients to that from healthy volunteers. They found that their observations from animal models held true in that the average length of all the DNA pieces present in the blood from melanoma patients was 20-50 base pairs shorter compared to the DNA pieces in blood from healthy volunteers. Upon sequencing the DNA, they found that DNA fragments containing mutated genes – markers of tumors – were typically smaller than healthy versions of the gene from within the same patient. The results suggested that circulating tumor DNA is more likely to be shorter than circulating healthy DNA. Therefore, Underhill explains, selecting for pieces that are smaller in size should enrich for DNA that comes from tumors. If a person carries them, separation of specific DNA fragments based on size should make them easier to see – similar to reducing the size of the haystack without removing or changing the size of the needle.

To test the notion, the scientists examined DNA from four lung cancer patients, isolating fragments that were 20-50 base pairs shorter than the total average size in circulation. Doing so increased the proportion of tumor to healthy DNA by 2.5 to 9-fold. The approach was most successful in making a difference in samples from the two patients in which the smaller-sized tumor DNA was not readily apparent, which may represent patients with low tumor burden and previously difficult to detect circulating tumor DNA. “It’s possible that jump in sensitivity could make the difference between being able to detect a cancer, and not,” says Underhill. Together, the findings support the idea that sorting for smaller DNA fragment size could increase the sensitivity of liquid biopsies for tracking many different types of cancers

This research was supported by the National Cancer Institute (K99168943).