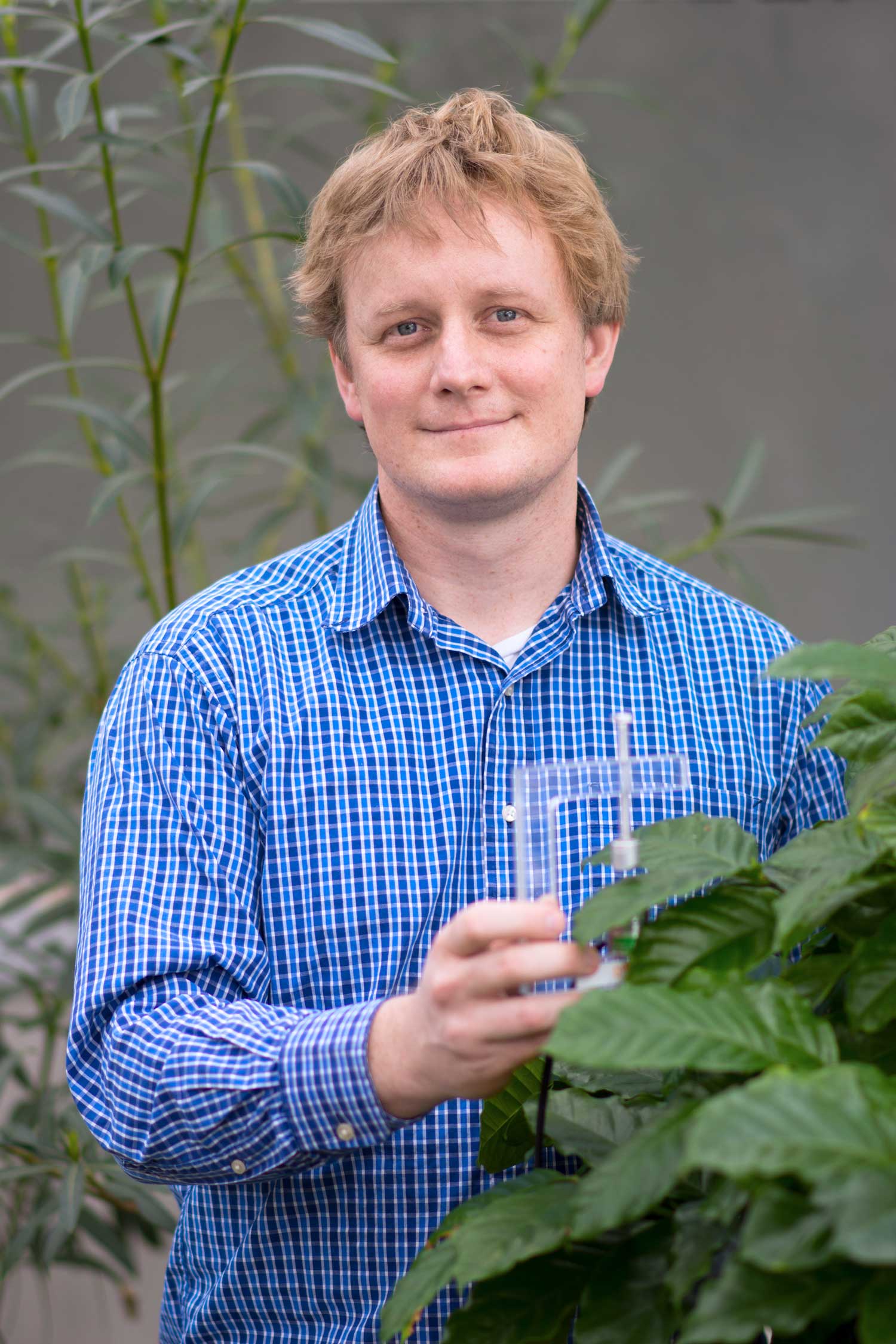 William Anderegg, an assistant professor of biology, has received one of 18 Packard Fellowship for Science and Engineering from the David and Lucile Packard Foundation for his research on the effects of climate change and drought on forests.

“I felt honored, thrilled, and surprised all at once,” Anderegg says. “I was pretty overwhelmed by the exciting news.”

Anderegg arrived at the U as an assistant professor in 2015 and studies how droughts affect forests and individual trees. Most recently, he and his colleagues published a study in Nature showing how tree species diversity in forests confers resilience to drought.

“The future of Earth’s forests hangs in the balance between the potential benefits of rising atmospheric carbon dioxide and the stresses from climate change,” reads Anderegg’s research statement. “Anderegg’s lab focuses on understanding and predicting the future of Earth’s forests using a mix of experiments, field measurements, and mechanistic models.”

Every year, the Packard Foundation invites the presidents of 50 universities to nominate two professors each from their institutions. Nominations are reviewed by an advisory panel of distinguished scientists and engineers.

“Dr. Anderegg’s pioneering work elegantly combines field measurements with complex mathematical modeling to better predict the response of forests to drought,” says Denise Dearing, director of the U’s School of Biological Sciences. “He is the perfect fit for an award from the Packard Foundation especially in light of the recent report from the Intergovernmental Panel on Climate Change stating that we have less than 12 years to take action to lessen the most serious effects of climate change.”

“The Packard Fellowships are among the nation’s largest nongovernmental fellowships, designed to allow maximum flexibility in how the funding is used,” according to the foundation. Packard Fellows have been awarded significant prizes, the Foundation notes, including Nobel Prizes in Physics and Chemistry, MacArthur Fellowships and election to the National Academy of Sciences.

“This is really exciting and different because the funding is not tied to a specific, defined project, as is the case with most other grants,” Anderegg says. “The Packard Foundation really aims to fund individual scholars and to let these scientists pursue whatever creative or high-risk projects that they want to tackle.”

The creative latitude afforded by the fellowship embodies the sentiment of the late David Packard, co-founder of Hewlett-Packard and the Packard Foundation:

A select group of U scholars

Anderegg joins four other Packard Fellows affiliated with the University of Utah.  The most recent awardee is June Round, an associate professor of pathology, who received her fellowship in 2013.

“I am truly grateful to be part of the Packard Foundation,” Round says. She studies how communities of microorganisms, called the microbiota, in the gut affect the health of the whole organism. The Packard Fellowship, she says, enabled her to identify ways to modify gut microbiomes and expand her research. “Because this Packard funding has such flexibility this allowed us to follow up on projects and get into new mouse models of disease that involve diabetes and obesity,” she says.

“This is not to say that there is no pressure,” says John Lupton, a former professor of physics at the U now at Regensburg University and a 2008 fellow. “When you are thrown in a pool with peers like [recent 2018 Nobel Laureate and 1989 fellow Frances] Arnold, you swim. Period.”

Lupton used his fellowship to invent a microscopy technique, a wagon wheel-shaped molecule to improve OLED efficiency and the straightest molecule ever made.

“We didn’t set out to solve a particular problem,” he says, “we went on a voyage to find new challenges. Physics is not only about solving problems, but also about finding them. Such ventures are often hard to do with conventional funding which requires roadmaps with little flexibility.”

Graeme Milton, distinguished professor of mathematics, received one of the first Packard Fellowships in 1988. He used the funding to bring colleagues from the soon-to-be-dissolved Soviet Union (including current U professor Andrej Cherkaev) to the United States to work with him for a year.

Milton attended the first meeting of Packard alumni, held at the Monterey Bay Aquarium in Monterey, California (“a spectacular place for a meeting,” he says) and has watched the meeting grow each year since then.

Brenda Bass, distinguished professor of biochemistry and 1991 Packard fellow, noted the importance of the annual meetings. “You meet scientists who have much more scientific diversity than the more specialized meetings we typically attend,” Bass says. “This fosters thinking in new directions.”

Bass says her Packard funding was very important to her lab’s early studies on RNA editing and double-stranded RNA binding proteins. “The freedom to use Packard funding to go down any path, regardless of its perceived outcome, is truly wonderful,” she says. “Such flexibility very often leads to discovery.”

Anderegg is still working out how he’d like to use the funding. “I want to use part of it to invest in some long-term climate change research that’s hard or nearly impossible to fund with traditional grants,” he says, “and also part of it for some near-term but high-risk projects to look at how forests will respond to climate change across the globe.”