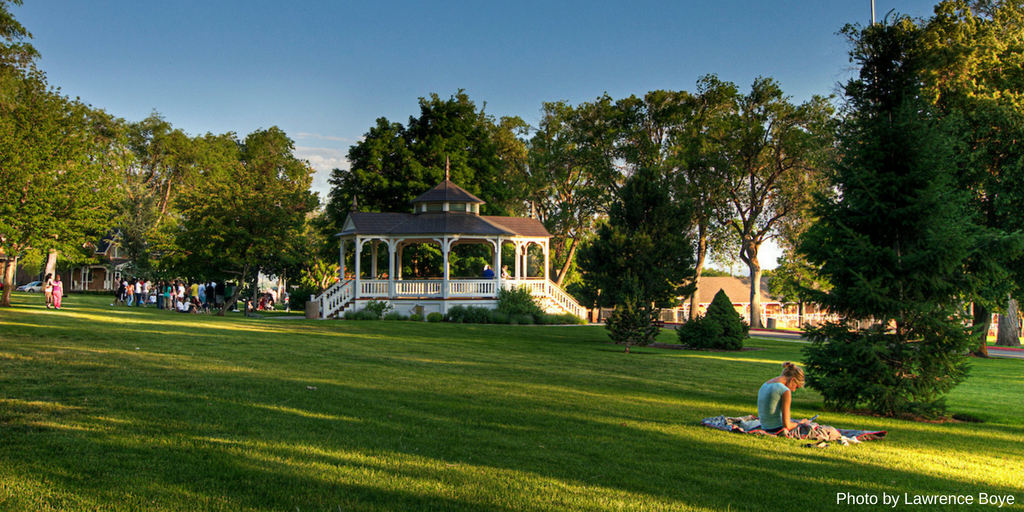 Lawns in the Salt Lake Valley up to 100 years old are not yet saturated in the nutrient nitrogen, which is added by fertilizer, according to a new study from University of Utah researchers. The result is surprising, since previous studies in the Eastern U.S. suggested that fertilized soil would become saturated with nitrogen within a few decades.

Something different is happening in Salt Lake’s soils, according to postdoctoral researcher Rose Smith, lead author of the new study. Several natural processes may account for the unusual pattern of nitrogen accumulation, although Smith isn’t sure yet which ones are responsible in this case. The work is published in Oecologia and was funded by the National Science Foundation. The paper is part of a special issue honoring the career of U. biology professor and co-author James Ehleringer.

Nitrogen is one of the key nutrients for plants, and the nitrogen cycle is how nitrogen in the atmosphere (which is abundant and, unfortunately, biologically useless) is converted into forms that plants can use. Bacteria transform gaseous nitrogen into nitrates, which can be taken up by plants. The cycle continues as decomposing bacteria either return the nitrogen into the soil or release it into the atmosphere where it can act as a pollutant. In some cases, nitrogen can be lost from soil as it’s leached via groundwater to lakes or streams – also acting as a pollutant.

“We have altered the nitrogen cycle vastly,” Smith says. Now industrial processes do the work of fixing nitrogen, pumping a huge influx of the nutrient into lawns and fields. “What are the unintended consequences of all this extra nitrogen?” she says. As part of her larger research program into the effects of nitrogen in Utah’s Jordan River, Smith and her colleagues looked first at one possible nitrogen source: Salt Lake’s lawns.

In 2007, graduate student Jebediah Williamson and U biology professor James Ehleringer took soil samples from 40 lawns in the Salt Lake valley adjacent to homes build between 1900 and 2000 to study soil carbon. Smith then used these samples to better understand nitrogen accumulation over time. The idea was to look at a sequence of how much nitrogen was in lawns of different ages and then work out the rate of nitrogen accumulation over time, with the blanket assumption that the lawns have all been treated and fertilized relatively the same. “So there’s an assumption there right?” Smith says. “Another caveat to this study is that we don’t know how much people fertilize.” The study didn’t ask homeowners about how much fertilizer they used, but instead compared a range of possible fertilization behaviors to the rate of nitrogen accumulation they were seeing.

But instead, Smith and her colleagues found a roughly straight-line relationship between nitrogen content and time, indicating that even after 100 years, Salt Lake soils are still accumulating nitrogen. The reason isn’t clear. And just storage in the soil alone can’t account for the nitrogen that’s likely been added to the soil over time. Under any but the most conservative fertilization scenarios, significant quantities of nitrogen are just gone.

“There could be really big losses at the same time as accumulation,” Smith says, “which is really kind of a simple idea, but it’s an idea that questions our understanding of how soils deal with nitrogen.” So instead of an overfull bathtub, the soil nitrogen system may be more like a leaky sieve, never reaching saturation.

A clue to where the nitrogen went may be in the soils themselves. The researchers measured ratios of stable isotopes of nitrogen in the soil. Denitrifying bacteria prefer to use lighter nitrogen-14 isotopes, leaving the heavier nitrogen-15 isotopes behind. Groundwater leaching of nitrogen doesn’t seem to have a preference, removing both isotopes indiscriminately. Smith found that the ratio of nitrogen-15 increased with soil age, suggesting that nitrogen loses to the air are more likely than leaching. Many of the soils sampled were rich in clay, which inhibits water drainage and leaching, strengthening this hypothesis.

But the nitrogen may still be making its way to the lakes and rivers of the Wasatch Front. The Jordan River is contaminated with the nutrient. Smith hopes to explore if there’s any connection between the river and lawn nitrogen. She’s also participating in an upcoming project to develop nutrient management techniques in stormwater at an experimental plot near the U’s Williams Building. Together, these studies aim to answer the question Smith says is raised by this study’s surprise results: “Are the soils a major source of nitrogen to our waterways,” she says, “or not?”