What you can’t see can hurt you

What if you could see nasty microscopic air pollutants in your home?

Engineers from the University of Utah’s School of Computing conducted a study to determine if homeowners change the way they live if they could visualize the air quality in their house. It turns out, their behavior changes a lot.

Their study was published this month in the Proceedings of the ACM on Interactive, Mobile, Wearable and Ubiquitous Technologies. The paper also is being presented Oct. 9 in Singapore during the “ACM International Joint Conference on Pervasive and Ubiquitous Computing.” The paper can be viewed and downloaded here. 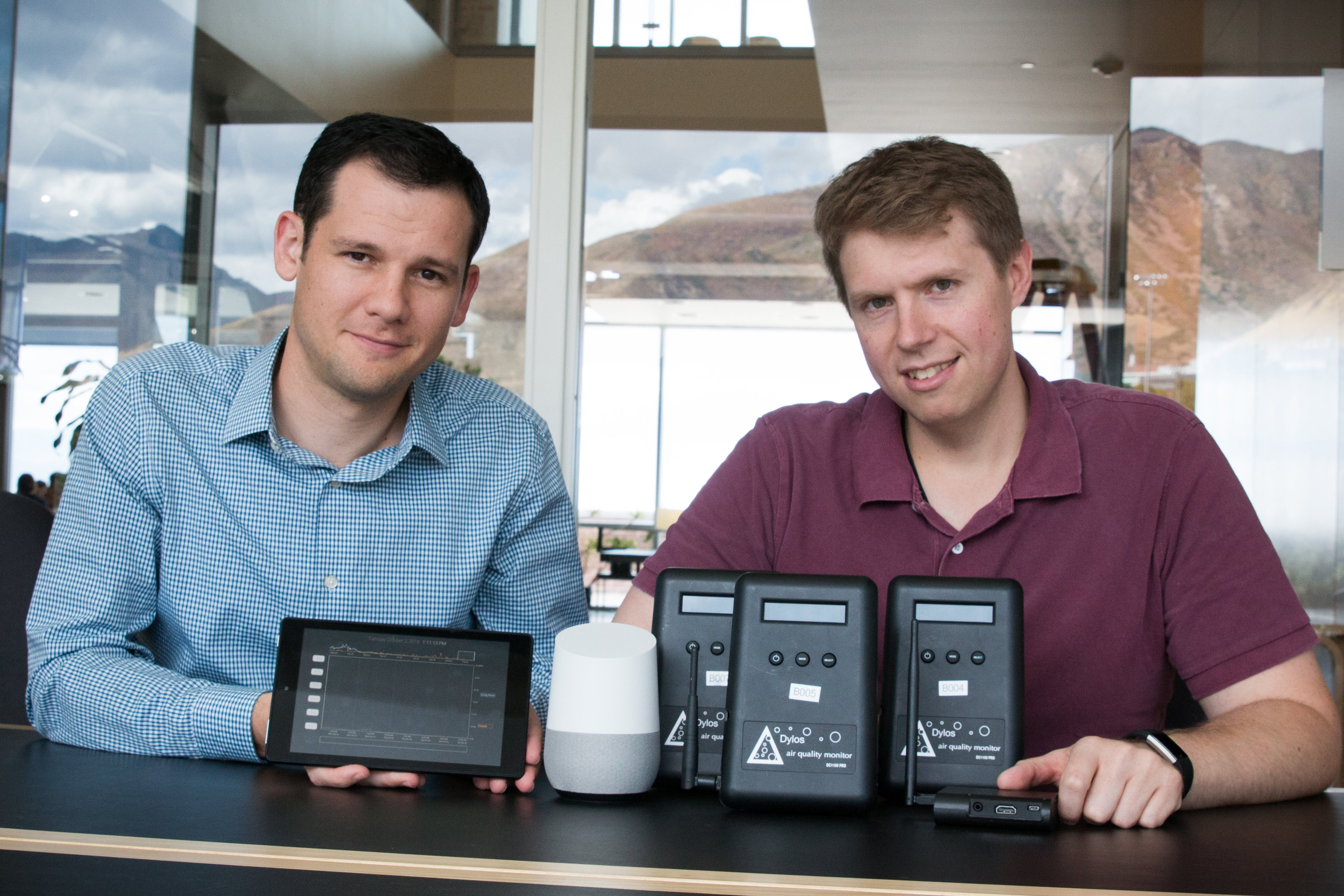 University of Utah School of Computing assistant professor Jason Wiese (left) and computing doctoral student Jimmy Moore conducted a study to determine if homeowners change the way they live if they could visualize the air quality in their house. They provided participants air pollution sensors, a Google Home speaker and a tablet to measure and chart the air quality in their homes.

During the day, the air pollution inside your home can be worse than outside due to activities such as vacuuming, cooking, dusting or running the clothes dryer. The results can cause health problems, especially for the young and elderly with asthma.

University of Utah engineers from both the School of Computing and the Department of Electrical and Computer Engineering built a series of portable air quality monitors with Wi-Fi and connected them to a university server. Three sensors were placed in each of six homes in Salt Lake and Utah counties from four to 11 months in 2017 and 2018. Two were placed in different, high-traffic areas of the house such as the kitchen or a bedroom and one outside on or near the porch. Each minute, each sensor automatically measured the air for PM 2.5 (a measurement of tiny particles or droplets in the air that are 2.5 microns or less in width) and sent the data to the server. The data could then be viewed by the homeowner on an Amazon tablet that displayed the air pollution measurements in each room as a line graph over a 24-hour period. Participants in the study could see up to 30 days of air pollution data. To help identify when there might be spikes in the air pollution, homeowners were given a voice-activated Google Home speaker so they could tell the server to label a particular moment in time when the air quality was being measured, such as when a person was cooking or vacuuming. Participants also were sent an SMS text message warning them whenever the indoor air quality changed rapidly.

Participants were given an Amazon table that displayed the air pollution data in an easy-to-understand line chart so they could see when and why the air quality worsened. Homeowners also could label points in time when the pollution would spike, such as when they were cooking or vacuuming.

During the study, researchers discovered some interesting trends from their system of sensors, which they called MAAV (MeasureAir quality, Annotate data streams, and Visualize real-time PM2.5 levels). One homeowner discovered that the air pollution in her home spiked when she cooked with olive oil. So that motivated her to find other oils that produced less smoke at the same cooking temperature.

Another homeowner would vacuum and clean the house just before a friend with allergies dropped by to try and clean the air of dust. But what she found out through the MAAV system is that she actually made the air much worse because she kicked up more pollutants with her vacuuming and dusting. Realizing this, she started cleaning the house much earlier before the friend would visit.

Participants would open windows more when the air was bad or compare measurements between rooms and avoid those rooms more with more pollution.

“Without this kind of system, you have no idea about how bad the air is in your home,” Wiese says. “There are a whole range of things you can’t see and can’t detect. That means you have to collect the data with the sensor and show it to the individual in an accessible, useful way.”

Wiese says no known manufacturers make air quality systems for the home that allow residents to visualize and label the air quality in this way, but he hopes their research can spur more innovation.

The study involves engineering in collaboration with other University of Utah scientists, including biomedical informatics and clinical asthma researchers. It was funded as part of a larger National Institutes of Health program known as Pediatric Research using Integrated Sensor Monitoring Systems (PRISMS), launched in 2015 to develop sensor-based health monitoring systems for measuring environmental, physiological and behavioral factors in pediatric studies of asthma and other chronic diseases.