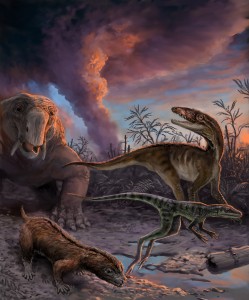 Animals escaping from an erupting volcano 235 million years ago in northwestern Argentina. These species, found as fossils in the Chañares Formation, include early mammal relatives (the dicynodont Dinodontosaurus in the left background, and the cynodont Massetognathus in the left foreground) and early dinosaur precursors (Lewisuchus in the right background, and Lagerpeton in the right foreground). By measuring radioactive isotopes in zircons crystals from the volcanic ash, scientists were able to determine the precise age of this fossil assemblage.

A new study by a team of scientists from Argentina, Brazil, California and the Natural History Museum of Utah at the University of Utah has determined that the time elapsed between the emergence of early dinosaur relatives and the origin of the first dinosaurs is much shorter than previously believed. The discovery not only places a new timeline on the connection between early dinosaur relatives and the first dinosaurs in this particular geologic formation, but also in other formations across the world.

The team, which included Randall Irmis, associate professor and curator of paleontology at the Natural History Museum, employed radioactive isotope measurements to date zircon crystals found in the sediments of the Chañares Formation, which is famous for its fossils of early dinosaur relatives.

The team found that the formation, and therefore the fossils found in it, is 234 to 236 million years old, from the Late Triassic Period; this is 5-10 million years younger than previous estimate of a Middle Triassic age.

“To discover that these early dinosaur relatives were geologically much younger than previously thought was totally unexpected,” said Irmis.

The results were recently published in the Proceedings of the National Academy of Sciences. The lead author is Claudia A. Marsicano from the University of Buenos Aires, and the co-authors are Irmis, Adriana C. Mancuso, Roland Mundil and Farid Chemale. 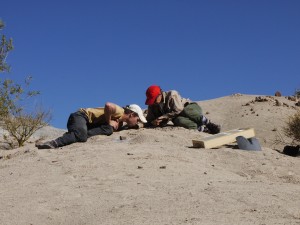 Co-author Adriana Mancuso (right) and Juan Martín Leardi (left) excavate the skeleton of the early mammal relative Massetognathus. This was also the site of one of the dated samples in the study.

The Chañares Formation is an approximately 75-meter-thick-(250-foot) geologic formation comprised of sediments deposited by rivers, streams and lakes during the Triassic Period in present-day La Rioja Province, northwestern Argentina.

“Among Triassic geologic formations containing fossils, the Chañares Formation is a classic. It contains a variety of complete fossil specimens of early dinosauromorphs, which are essentially dinosaur aunts, uncles and cousins,” said Irmis.

“In other basins, dinosaur precursors, early dinosaurs and faunas dominated by dinosaurs do not all conveniently exist in the same place. In the basin containing the Chañares Formation, you can follow hundreds of meters of sediments back through time. Because of this, the margin of error is very narrow because you can see the complete history all in one basin,” said Marsicano, the paper’s lead author.

Today the Chañares Formation’s landscape looks reminiscent of southern Utah — high desert badlands. Back when dinosauromorphs roamed, however, the Chañares Formation was more tropical and lush. At that point in time the Earth was in a hothouse state—extremely warm without any polar ice caps and high levels of carbon dioxide in the atmosphere. 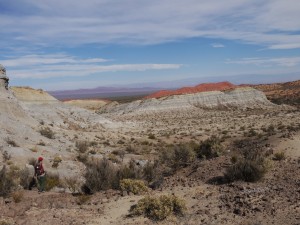 The team collected two rock samples from the Chañares Formation: One from the base of the level where fossils were preserved and one from near the formation’s top.

“The Chañares Formation contains tuffs, or volcanic ashes, that can be dated with great accuracy. So in this basin, not only are there many high-quality, complete fossils that allow us to easily identify taxa, but there are also tuffs in between that allow us to date the entire column,” said Marsicano.

The rock samples include volcanic ash that erupted from volcanoes at the same time the sediments were deposited. The samples were then crushed to extract zircon crystals from this ash.

When these crystals formed during the Triassic Period, they only incorporated uranium; over time, some of this uranium decayed into lead at an exact known rate. By measuring the uranium/lead ratio in each zircon crystal with a mass spectrometer, an instrument that separates elements and isotopes by mass and concentration, the researchers were able to determine the precise date age the crystals formed.

“In a coarse way, you can place fossils in certain time periods, but if you wish to constrain a major evolutionary event, like the beginning of a group or the diversification of a group, the methodology has to have a margin of error that is much smaller. For something that happens over the course of, say, 600 million years, an error of 3-4 million years is not statistically significant. But if something happens over the course 10-12 million years, like the diversification of a group, an error of 3-4 million years is a major problem,” said Marsicano.

“By working with an international group that has the technological capability to date these rocks with great accuracy, we’ve dated the rocks for the first time.” 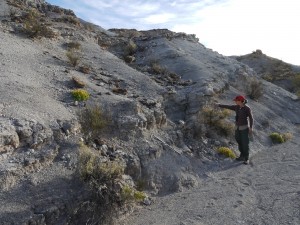 Co-author Adriana Mancuso (right) points to a volcanic ash layer (tuff) in the Chañares Formation that was sampled for radioisotopic dating.

Younger dinosauromorphs across the globe

The team’s results also call the timelines of a wide variety of other fossil-bearing formations across the world, all believed to be from the Middle Triassic Period, into question.

“We always thought these ‘Middle Triassic’ fossils showed the ecological recovery from the worst mass extinction of all time, the end-Permian extinction, but if these fossils are actually Late Triassic in age, they really have nothing to do with that recovery,” said Irmis. 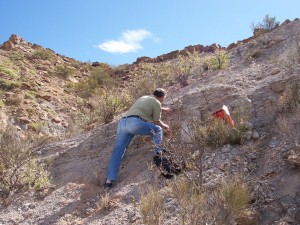 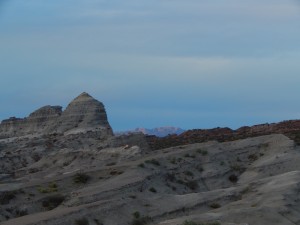 Dusk settles in over badlands of the Chañares Formation in Talampaya National Park, Argentina. 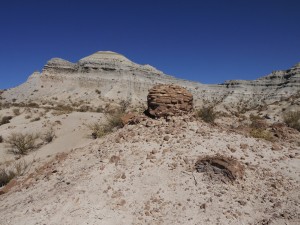 The rocks of the Chañares Formation contain a wealth of fossils from the Triassic Period, which are often preserved in large concretions (foreground).