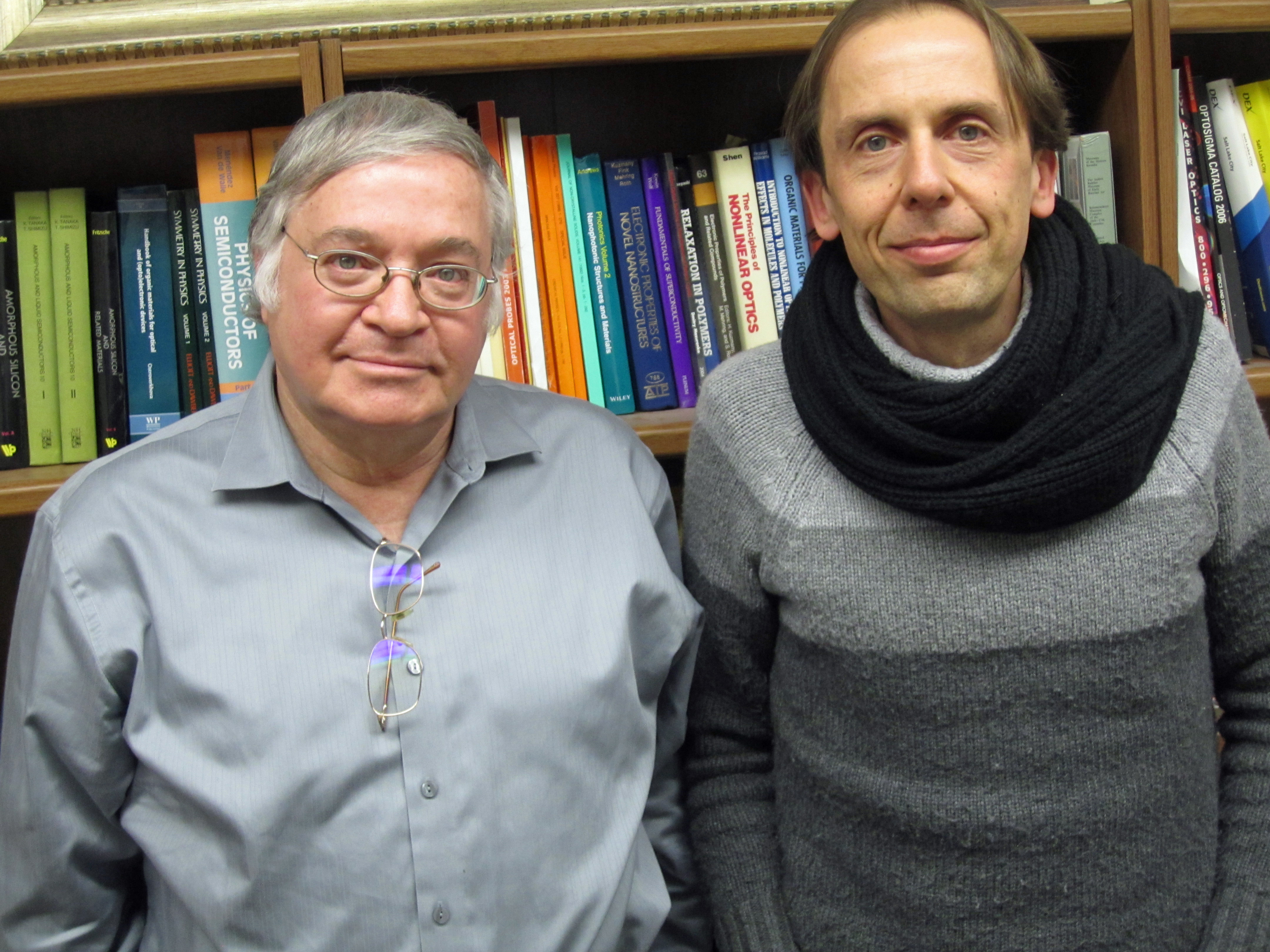 By showing that a phenomenon dubbed the “inverse spin Hall effect” works in several organic semiconductors – including carbon-60 buckyballs – University of Utah physicists changed magnetic “spin current” into electric current. The efficiency of this new power conversion method isn’t yet known, but it might find use in future electronic devices including batteries, solar cells and computers.

“This paper is the first to demonstrate the inverse spin Hall effect in a range of organic semiconductors with unprecedented sensitivity,” although a 2013 study by other researchers demonstrated it with less sensitivity in one such material, says Christoph Boehme, a senior author of the study published April 18 in the journal Nature Materials.

“The inverse spin Hall effect is a remarkable phenomenon that turns so-called spin current into an electric current. The effect is so odd that nobody really knows what this will be used for eventually, but many technical applications are conceivable, including very odd new power-conversion schemes,” says Boehme, a physics professor. 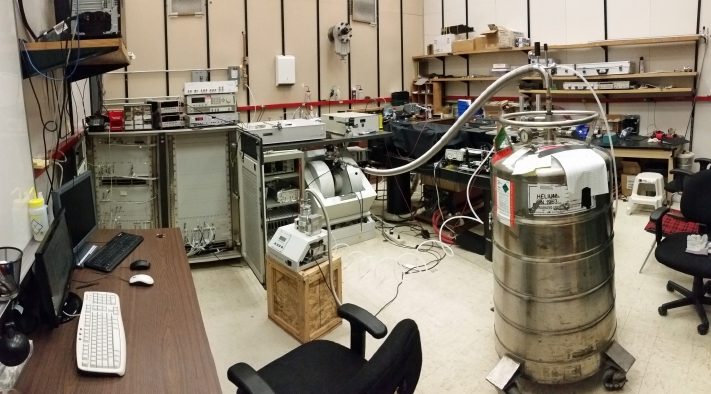 A view of the University of Utah physics laboratory where researchers showed that a phenomenon named the inverse spin Hall effect works in several organic semiconductors when pulsed microwaves are applied to the materials. The effect converts so-called spin current to electric current and may find use in future generations of batteries, solar cells and electronic devices.

Scientists already are developing such devices, such as a thermoelectric generator, using traditional inorganic semiconductors. Vardeny says organic semiconductors are promising because they are cheap, easily processed and environmentally friendly. He notes that both organic solar cells and organic LED (light-emitting diode) TV displays were developed even though silicon solar cells and nonorganic LEDs were widely used.

Vardeny and Boehme stressed that the efficiency at which organic semiconductors convert spin current to electric current remains unknown, so it is too early to predict the extent to which it might one day be used for new power conversion techniques in batteries, solar cells, computers, phones and other consumer electronics.

“I want to invoke a degree of caution,” Boehme says. “This is a power conversion effect that is new and mostly unstudied.”

Boehme notes that the experiments in the new study converted more spin current to electrical current than in the 2013 study, but Vardeny cautioned the effect still “would have to be scaled up many times to produce voltages equivalent to household batteries.”

From spin current to electric current

Just as atomic nuclei and the electrons that orbit them carry electrical charges, they also have another inherent property: spin, which makes them behave like tiny bar magnets that can point north or south.

Electronic devices store and transmit information using the flow of electricity in the form of electrons, which are negatively charged subatomic particles. The zeroes and ones of computer binary code are represented by the absence or presence of electrons within silicon or other nonorganic semiconductors.

Spin electronics – spintronics – holds promise for faster, cheaper computers, better electronics and LEDs for displays, and smaller sensors to detect everything from radiation to magnetic fields.

The inverse spin Hall effect first was demonstrated in metals in 2008, and then in nonorganic semiconductors, Vardeny says. In 2013, researchers elsewhere showed it occurred in an organic semiconductor named PEDOT:PSS when it was exposed to continuous microwaves that were relatively weak to avoid frying the semiconductor.

But Boehme and Vardeny say the electrical current generated in that study by the inverse spin Hall effect was small – nanovoltages – and was obscured by microwave heating of the sample and other undesired effects.

“We thought, let’s build different devices so these spurious effects were eliminated or very small compared with the effect we wanted to observe,” Boehme says.

In the new study, the researchers used short pulses of more powerful microwaves to utilize the inverse spin Hall effect and convert a spin current to electric current in seven organic semiconductors, mostly at room temperature.

One organic semiconductor was PEDOT:PSS – the same material in the 2013 study. The others were three platinum-rich organic polymers, two so-called pi-conjugated polymers and the spherical carbon-60 molecule named buckminsterfullerene because it looks like a pair of geodesic domes popularized by the late architect Buckminster Fuller.

The carbon-60 proved surprisingly to be the most efficient semiconductor at converting spin waves into electrical current, Vardeny says.

How the experiments were performed

The Utah physicists take multiple steps to convert spin current to electrical current. They begin with a small glass slide, about 2.1-inches long and one-sixth-inch wide. Two electrical contacts are attached to one end of the glass slide. Thin, flat copper wires run the length of the slide, connecting the contacts at one end with a “sandwich” at the other end that includes the glass at the bottom, the organic polymer semiconductor being tested in the middle and a nickel-iron ferromagnet on top. 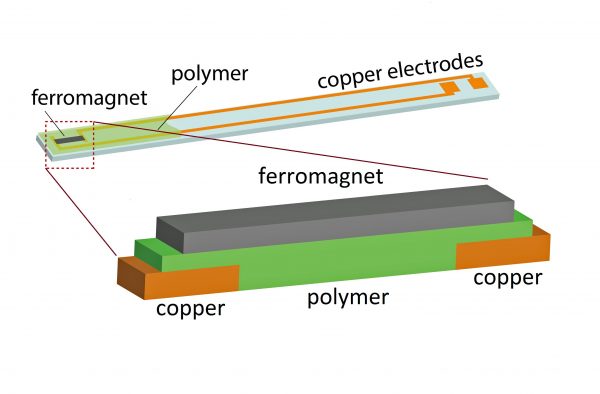 The upper part of this illustration shows the device, built on a small glass slide, that was used in experiments showing that so-called spin current could be converted to electric current using several different organic polymer semiconductors and a phenomenon known as the inverse spin Hall effect. The bottom illustration shows the key, sandwich-like part of the device. An external magnetic field and pulses of microwaves create spin waves in the iron magnet. When those waves hit the polymer or organic semiconductor, they create spin current, which is converted to an electrical current at the copper electrodes.

This device then is inserted lengthwise into a metal tube about 1-inch diameter and 3.5 inches long. A nonconducting material surrounds the device inside this tube, which then is inserted into a table-sized magnet that generates a magnetic field.

“We apply a magnetic field and leave it more or less constant,” Boehme says. “Then we hook up the two contacts to a voltage meter and start measuring the voltage coming out of the device as a function of time.”

With just the magnetic field, no electrical current was detected. But then the Utah physicists bombarded the organic semiconductor device with pulses of microwaves – as powerful as those from a home microwave oven but in pulses ranging from only 100 to 5,000 nanoseconds (the latter equal to one 200,000th of a second).

“All of a sudden we saw a voltage during that pulse,” Boehme says.

Vardeny says the microwave pulses generate spin waves in the device’s magnet, then the waves are converted into spin current in the organic semiconductor, and then into an electric current detected as a voltage.

Compared with the 2013 study, the use of microwave pulses in the Utah experiments meant “our power is much higher but the heating is much less and the inverse spin Hall effect is about 100 times stronger,” Boehme says.

In effect, the pulsed microwaves provide a way to enhance the inverse spin Hall effect so it can be used to convert power, Vardeny adds.

The new study also showed that the conversion of spin current to electric current works in organic semiconductors via “spin-orbit coupling” – the same process found in inorganic conductors and semiconductors – even though the phenomenon in inorganic and organic materials works in fundamentally different ways, Boehme says. 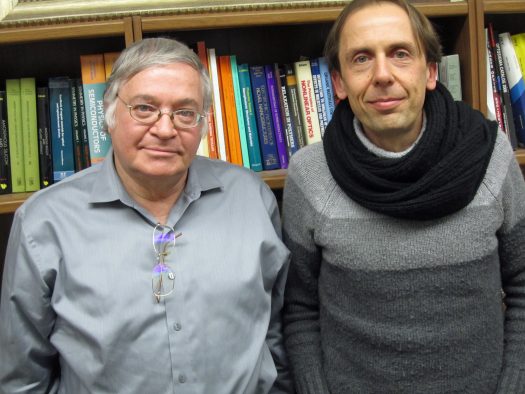 University of Utah physicists Z. Valy Vardeny and Christoph Boehme published a new study in Nature Materials demonstrating that a range of organic semiconductors can be used to convert a so-called magnetic spin current into electric current. They don’t yet know the efficiency of this power-conversion method, but say it has possible future uses in future solar cells, batteries and electronic devices like computers and cell phones.