Cadavers buoy idea our hands are for dexterity and fistfights 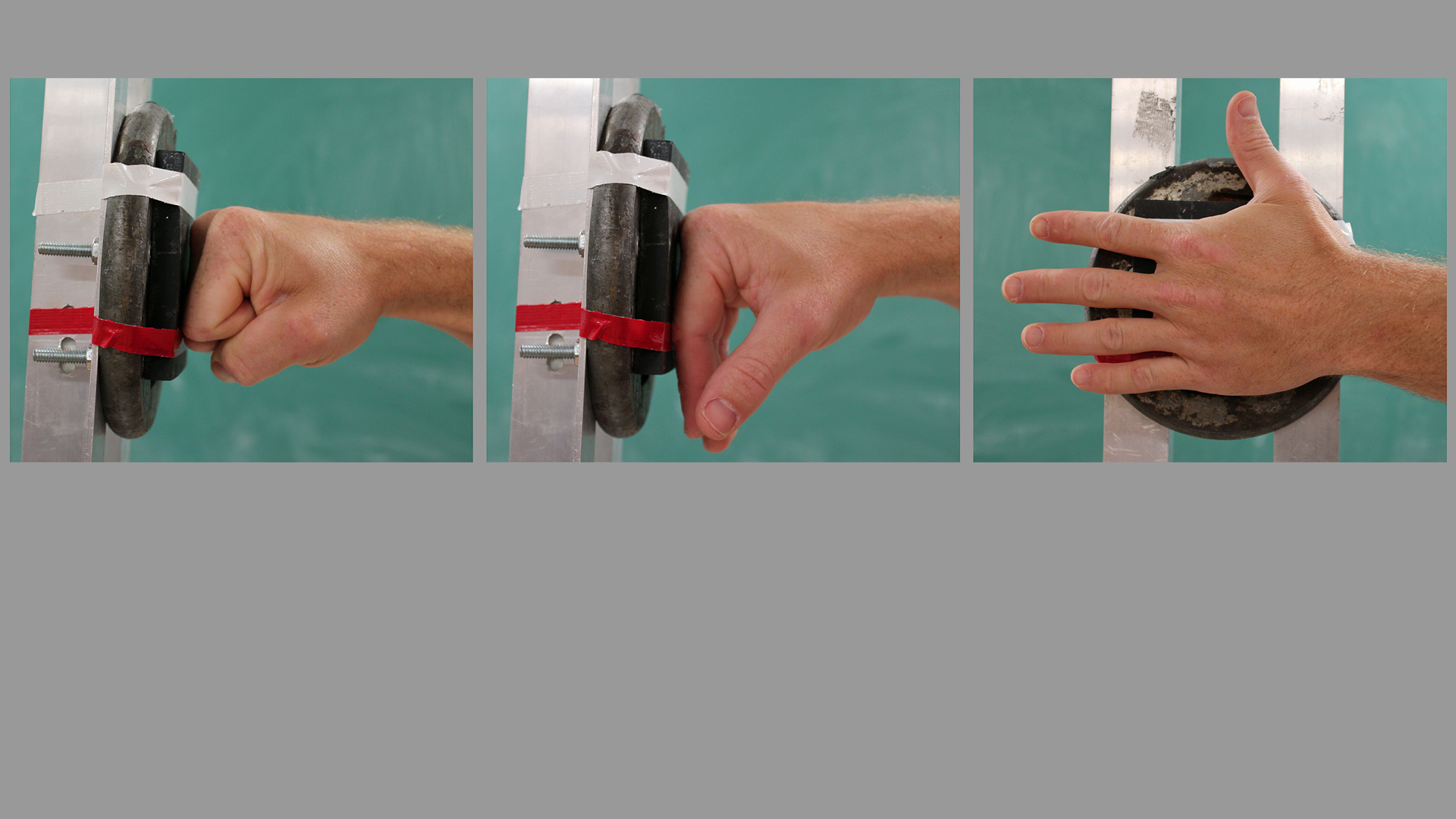 University of Utah biologists used cadaver arms to punch and slap padded dumbbells in experiments supporting a hotly debated theory that our hands evolved not only for manual dexterity, but also so males could fistfight over females.

“The idea that aggressive behavior played a role in the evolution of the human hand is controversial,” says biology professor David Carrier, senior author of the study published online Oct. 21 in the Journal of Experimental Biology. “Many skeptics suggest that the human fist is simply a coincidence of natural selection for improved manual dexterity. That may be true, but if it is a coincidence, it is unfortunate.”

“As an alternative, we suggest that the hand proportions that allow the formation of a fist may tell us something important about our evolutionary history and who we are as a species,” Carrier adds. “If our anatomy is adapted for fighting, we need to be aware we always may be haunted by basic emotions and reflexive behaviors that often don’t make sense – and are very dangerous – in the modern world.”

Biology professor David Carrier in his University of Utah lab, where he and his students conducted experiments with cadaver arms showing that a clenched fist reduces strain on metacarpal or palm bones when punching. The findings back Carrier’s controversial theory that human hands did not evolve solely for manual dexterity, but also for male-male fistfights over females.

Humans have shorter palms and fingers and longer, stronger, flexible thumbs compared with other apes. These features have been long thought to have evolved so our ancestors had the manual dexterity to make and use tools.

Carrier and his collaborators not only have argued our hands evolved partly for punching but that the faces of human ancestors, the australopiths, evolved to resist punching – and that human faces became more delicate as our violence became less dependent on brute force. The new study sought more experimental evidence for his theory using nine male cadaver arms purchased from the university’s body donor program and from a private supply company.

“We tested the hypothesis that a clenched fist protects the metacarpal [palm or hand] bones from injury [and fracture] by reducing the level of strain during striking,” the study says.

They add that the evolutionary significance of the hands of humans and their ancestors “may be that these are the proportions that improved manual dexterity while at the same time making it possible for the hand to be used as a club during fighting.”

The research was funded by the National Science Foundation. Carrier conducted the study with two undergraduate biology students who helped design the experiment and did much of the work with the cadaver arms: Joshua Horns and Rebekah Jung.

The punching dead: showing what happens ‘when guys get mad’

Carrier emphasizes: “We are not proposing the only important things were natural selection for dexterity and for punching.” Other possibilities include genetic drift – variation in hand proportions being lost among a small, isolated population – and unidentified genetic and developmental factors. Carrier notes that natural selection favored lengthening the big toe and shortening other toes so human ancestors could run more easily, and the same genes likely affected hand proportions as well.

The experiment’s cadaver arms were placed in a pendulum-like apparatus so they could swing toward and punch a padded, force-detecting dumbbell with either a clenched or buttressed fist (thumb locked around index and middle fingers, which are curled tightly to the palm) or an unbuttressed fist (thumb outward and not touching the loosely folded fingers) or side-slap the target with an open hand. 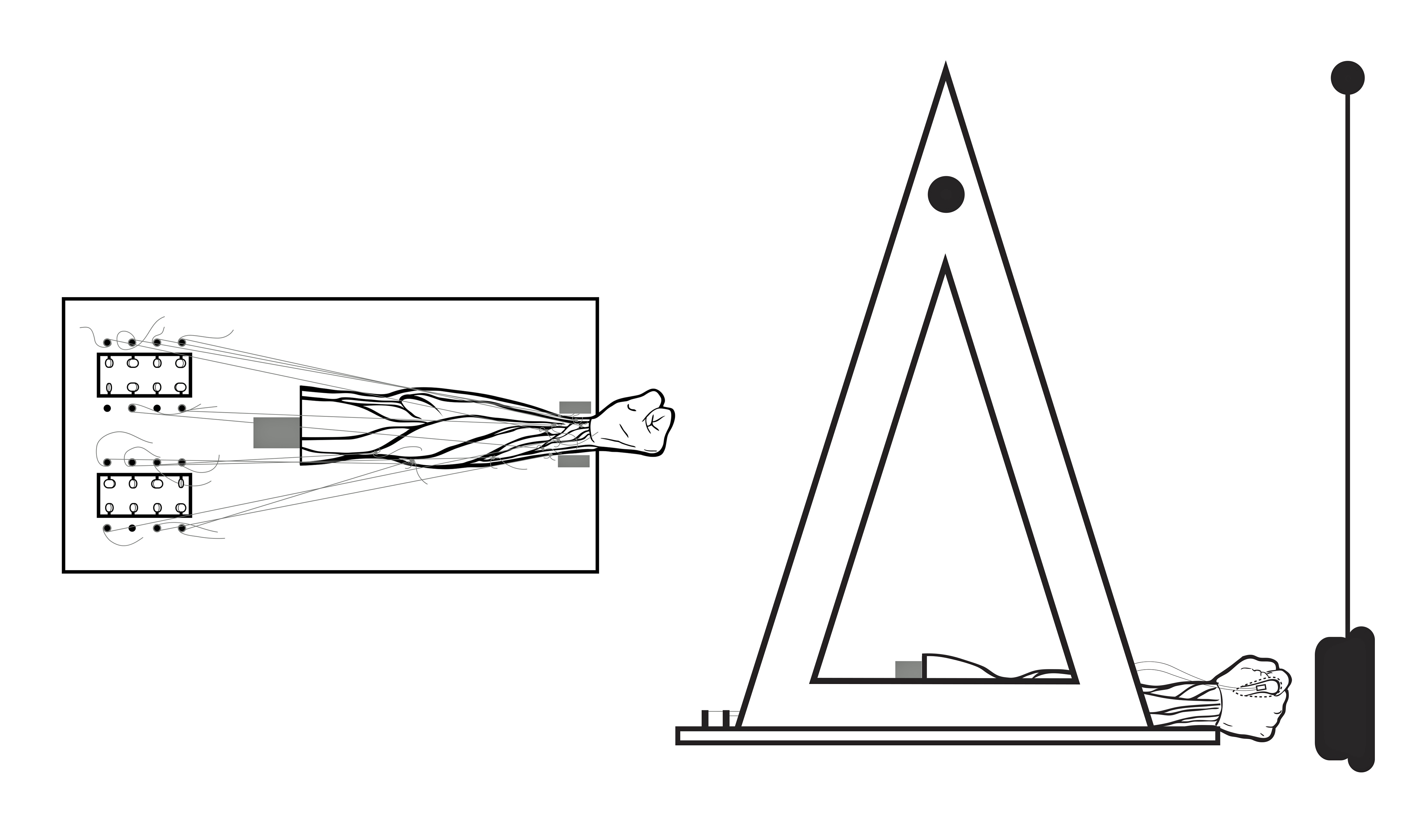 Birds-eye-view (left) and side view (right) show how cadaver arms were placed in a pendulum-like device so they could punch a padded dumbbell weight (far right) during University of Utah experiments that showed a clenched fist protects the bones against strain and injury better than a punch with an open-fist punch or open-handed slap.

The cadaver hands were placed in those positions with fishing line tied to tendons of forearm muscles. Those tendons pull various muscles that control the wrist, thumb and fingers. Guitar-tuner knobs controlled tension on the fishing lines to adjust the hands.

Strain gauges to measure bone deformation – stretching and compression – were glued to the back-of-the-hand side of the metacarpals, usually the second metacarpal. The gauges measured stress on those hand bones during punches and slaps.

Strain placed on the hand bones during the study was sevenfold less than needed to break a metacarpal. Why? With too much tension, the fishing lines would snap while trying to control a cadaver’s hand. The researchers used 25-to 200-pound test line – the thicker line is for deep-sea fishing – because “we had many lines break,” Carrier says. Stronger lines slipped off tendons.

He says it is valid to extrapolate to the larger forces of a real punch “because there is a linear relationship between force applied to a bone and how much it bends.”

“Each one of these hands took about a week of work,” he says. “First we had to dissect it to expose the muscles, apply one or more strain gauges, and then attach the lines to all the tendons so you can control the position of the wrist, thumb and fingers to create a buttressed fist, unbuttressed fist or open-palm posture. Everything had to be lined up just right – all the joints, tension in muscles, the orientation of bones.”

Illustration of a clenched or buttressed fist, an open fist and an open hand. Cadaver arms were positioned in these three ways to punch or slap a padded weight in University of Utah experiments that backed the idea that natural selection shaped human hand proportions not only for manual dexterity, but so men could fistfight over women. A clenched fist protects the hand from injury better than the other two positions.

Responding to claims of ‘bro science’

Carrier’s theory has been criticized harshly by some, with one well-known blogger calling it “bro science – dudes pummeling each other driving human evolution.” Here are some criticisms and Carrier’s responses:

— Critics say that if the human hand is adapted for fighting, then the primary target of fists – the face – would have coevolved protective features. Carrier and colleagues argue that is what the fossil record indicates happened in burly human ancestors, the australopiths. In humans, “as our face became less massive, we also lost punching power” along with upper body size, Carrier says.

— Many anthropologists argue that little historic and prehistoric evidence exists for fistfighting. Carrier says history shows the use of fists to strike was common in many human cultures, and the prehistoric record provides consistent ancient evidence.

— Some people believe the human hand is too delicate to have evolved to be an important weapon. They say early humans would use sticks or rocks. However, Carrier says studies of assault injuries indicate that human fists are common, effective weapons, and that when humans fight, face bones break much more frequently than hand bones.

— Critics argue that if men were adapted for fistfighting, our species would exhibit large rather than relatively small differences in body mass between men and women. Carrier counters that in terms of lean body mass and upper body muscular strength, such differences in humans are large. He adds that the male-female differences in hand and face shape and size are among the largest.

— Critics of the “aggressive ape” theory of human evolution often argue that humans are by nature empathetic, cooperative and peaceful. Carrier agrees, but believes aggression played a key role in our evolution.

These photos of a living person’s hands punching or slapping a padded dumbbell weight shows the positions of cadaver arms and hands in a University of Utah study that found new support for a controversial theory that human hand proportions evolved not just for fine manipulation, but to make a clenched fist that would buttress the hand to reduce the chance of injury or fracture during male fistfights over females. Open-fist punches and open-handed slaps placed more strain on hand bones, increasing the risk of injury during fights.

and listen to this 40-minute podcast courtesy of StuffToBlowYourMind.com: